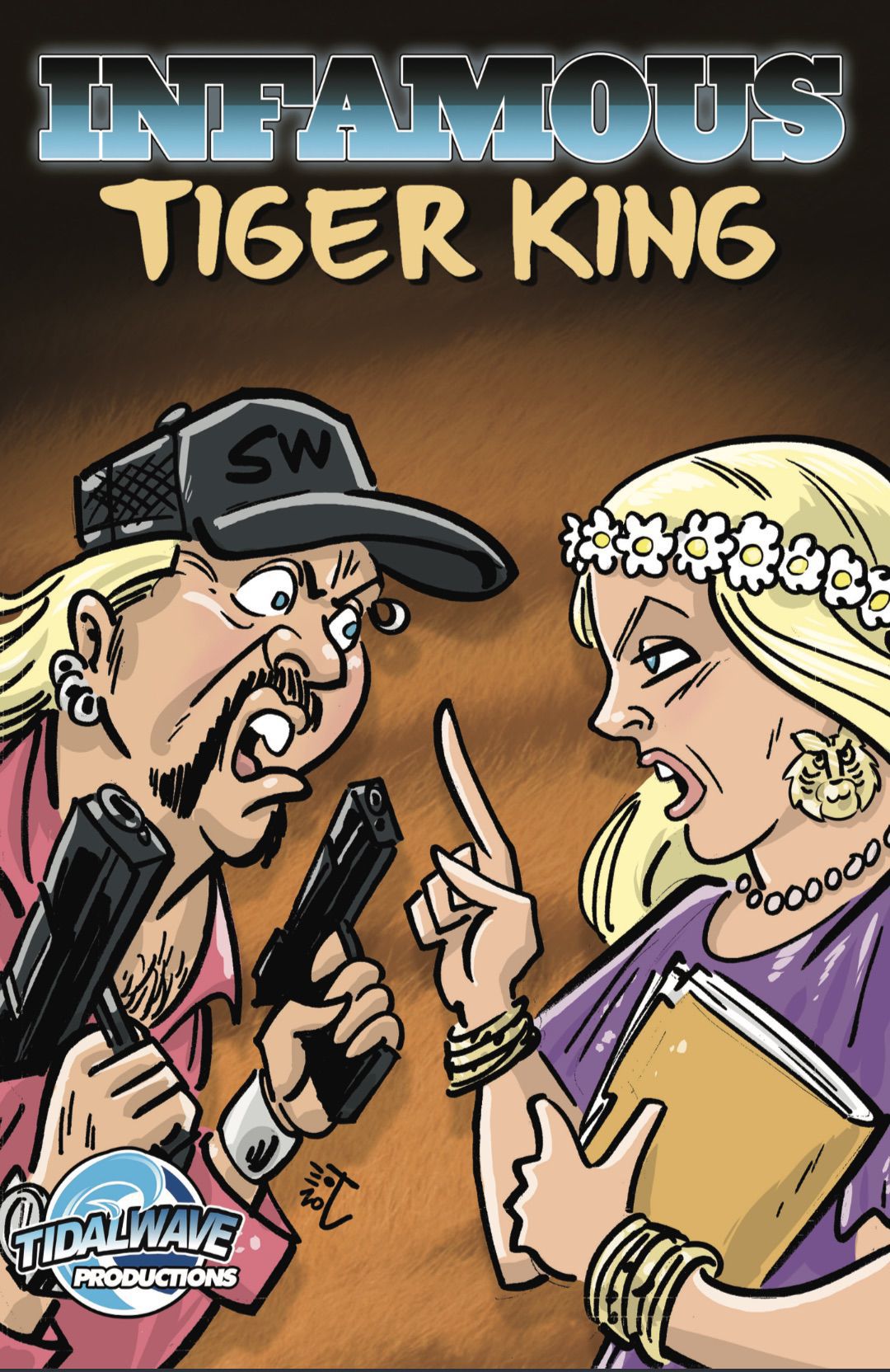 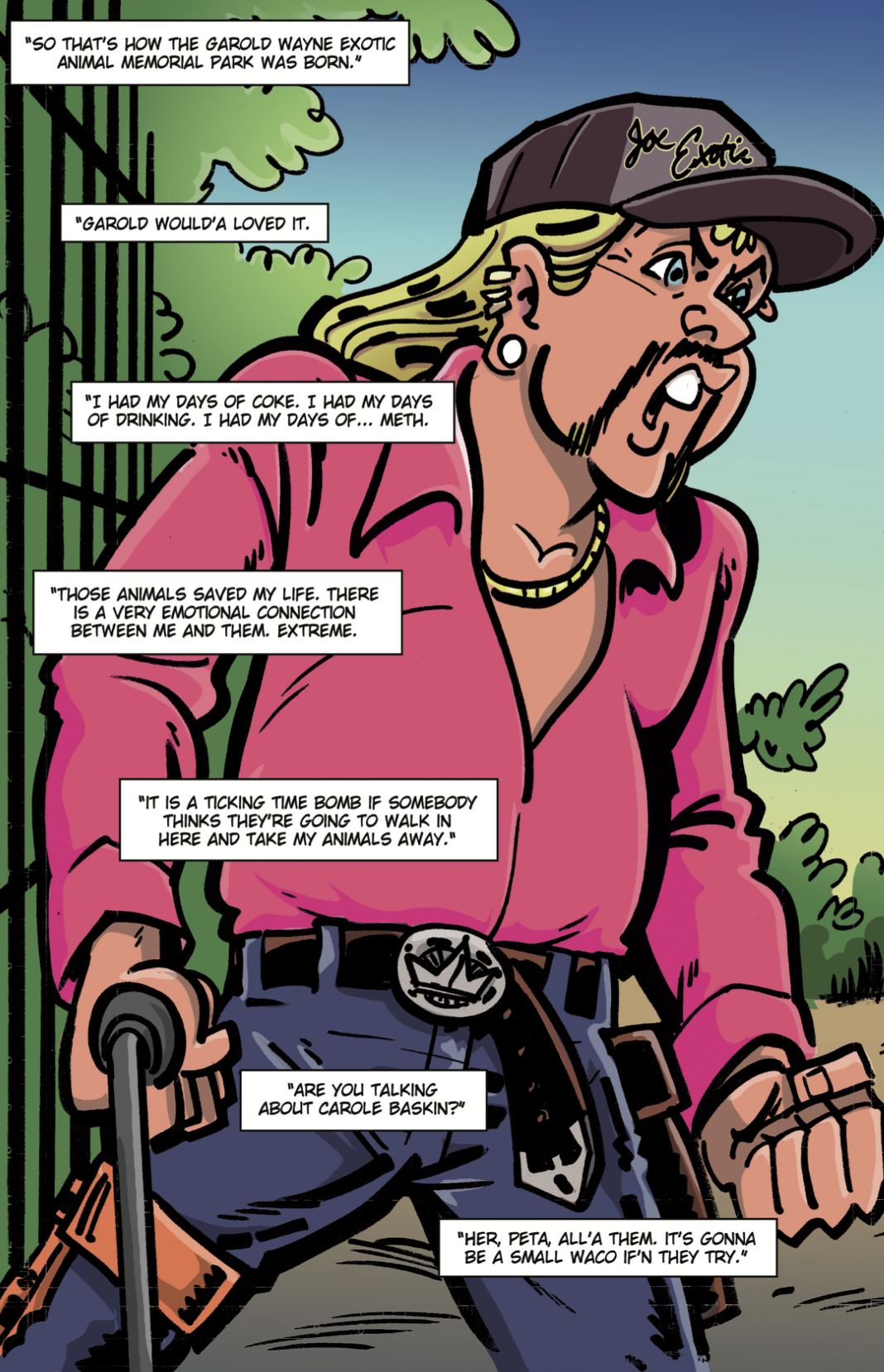 By now the whole world knows the story of Joe Exotic and Carole Baskin. Ever since the mid-pandemic premiere of Netflix’s “Tiger King” branded their names onto the collective backside of America’s mind, Oklahoma’s monarch of big cats has been hard to shake.

With a big budget film in the works you wouldn’t be faulted for thinking we’ve reached peak Tiger King mania — and then along comes TidalWave Productions with “Infamous: Tiger King,” a biographical comic book.

TidalWave is an independent production company based out of Vancouver, Washington, an ‘across the river’ suburb of Portland, Oregon. The company has produced several previous biographical comics in the Infamous series, including issues covering Charlie Sheen and Lindsay Lohan.

“Infamous: Tiger King” is a one shot, two-chapter comic that is available in print and digital formats. If you have seen the Netflix documentary, there isn’t much that is new in the pages of Infamous, but if anyone’s story was ripe for this kind of graphic adaptation, it’s Joe Exotic’s.

Written by Michael Frizell and illustrated by Joe Paradise, Infamous is mostly an origin story, an unofficial prequel of sorts to the now famous documentary series. The book splits its two chapters between telling the coming of age stories of Joe Exotic and his long-time antagonist Carole Baskin.

It’s hard to say how much of Infamous is biographical and how much can be chalked up to creative liberties.

If you haven’t heard his story, Exotic was, and is, a lot of things. He is the now incarcerated former owner and operator of the Greater Wynnewood Exotic Animal Park (a.k.a. G. W. Zoo) in Wynnewood, Oklahoma; a former candidate for Oklahoma governor, as well as a candidate for U.S. president; a one-time magician; country singer; police chief; and all around eccentric who was in a polyamorous relationship with two men half his age.

Jumping from his childhood “rescuing” small animals to his time as a police chief and the decision to found the zoo in memory of his brother, the Exotic is portrayed as a cartoonish villain.

But, much like the documentary series, it pulls no punches with his rival and self-declared nemesis, Carole Baskin, either. Baskin, who runs Big Cat Rescue, was accused of killing her husband and “feeding him to the tigers” by Exotic. Infamous takes this accusation and illustrates it in rather graphic detail. Additionally, the book contains a page dedicated to a message from PETA.

For the most part, this comic steers away from the actual events that led to Exotic’s arrest for plotting Baskin’s murder, choosing instead to focus more on the history of the two rivals. Again, there isn’t much that is new here outside of a few scenes played up for shock value.

The art seems to fit the over-the-top characters well. And the comic itself is “biographical” in the same way the History channel is “educational,” devoting only a few dozen pages to its subjects. Ultimately, “Infamous: Tiger King” will feed into the myth of Joe Exotic regardless of its quality, creating a feedback loop of infamy for the man who always wanted to be a celebrity.