Symbolic groundbreaking ceremony for the Altus-area missile sites, May 20, 1960, including the mayors of Altus and the twelve communities where the sites were located. 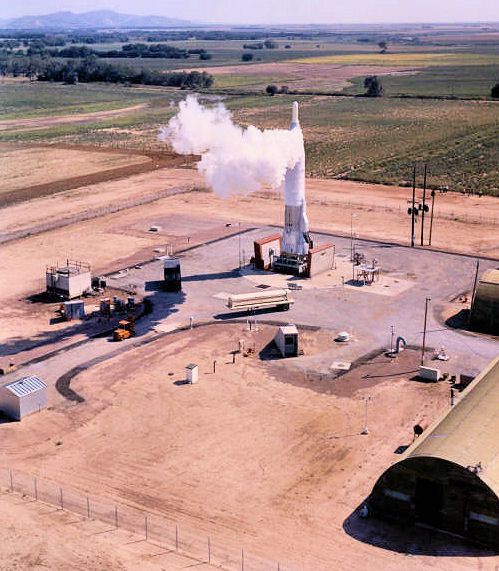 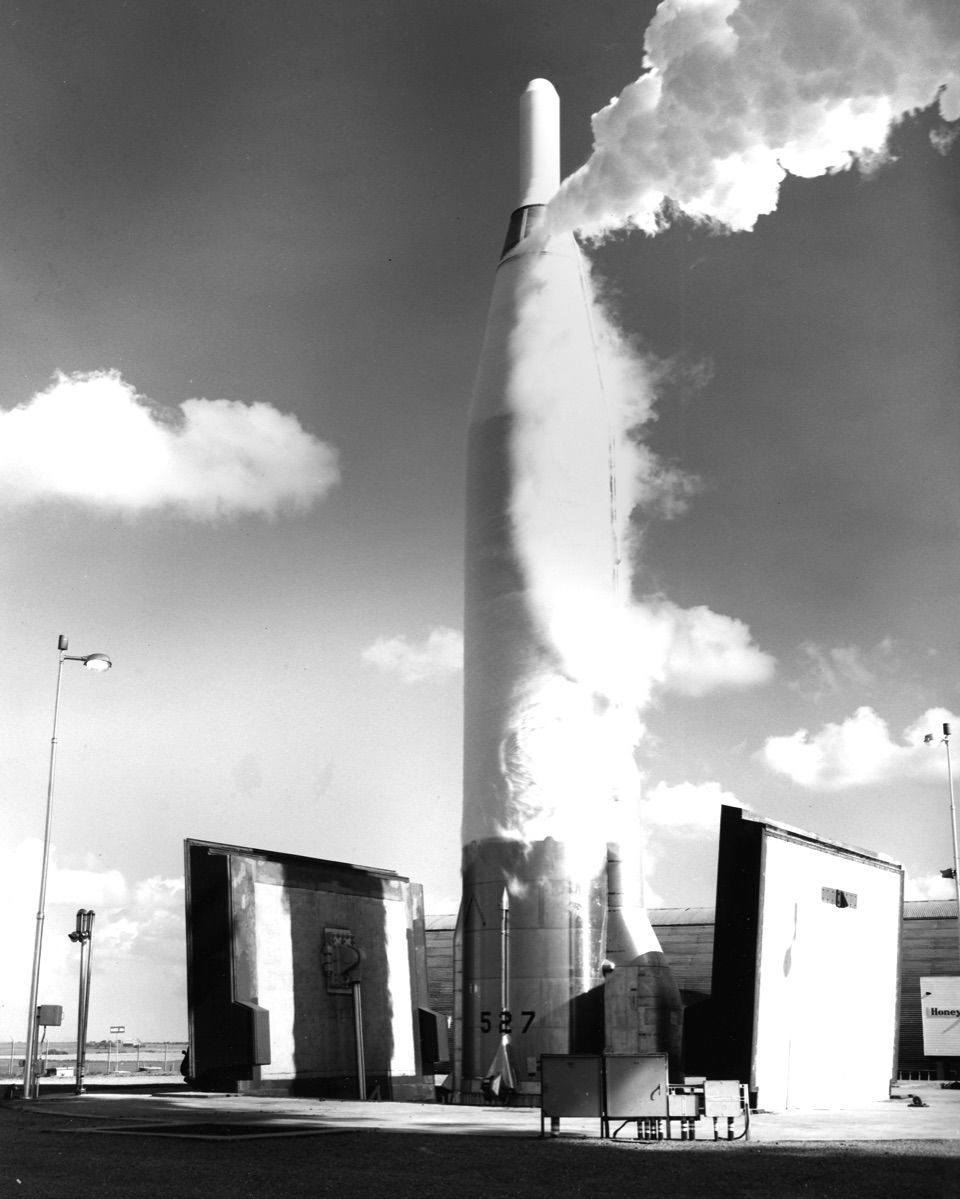 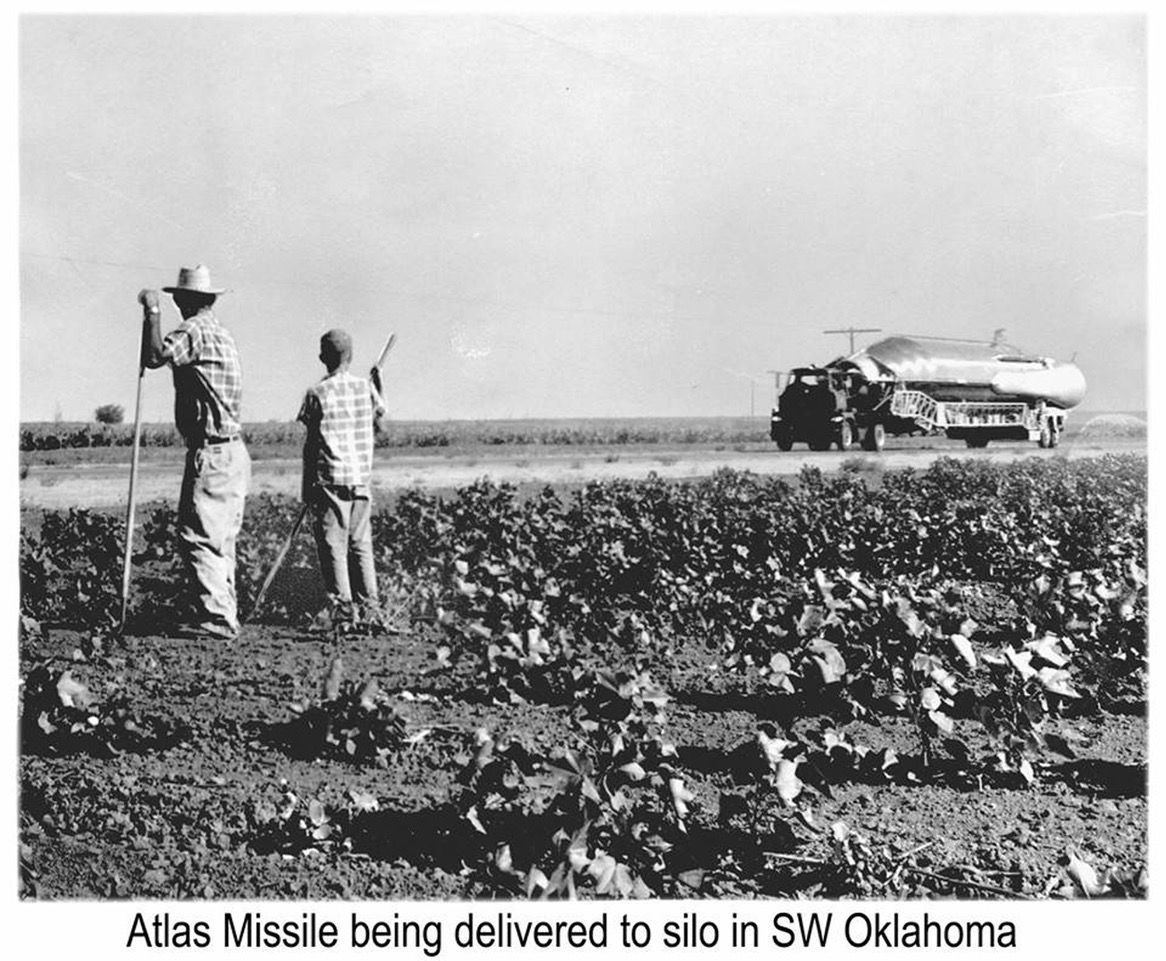 Atlas F missile being delivered to one of the Altus-area missile site silos in Southwest Oklahoma. 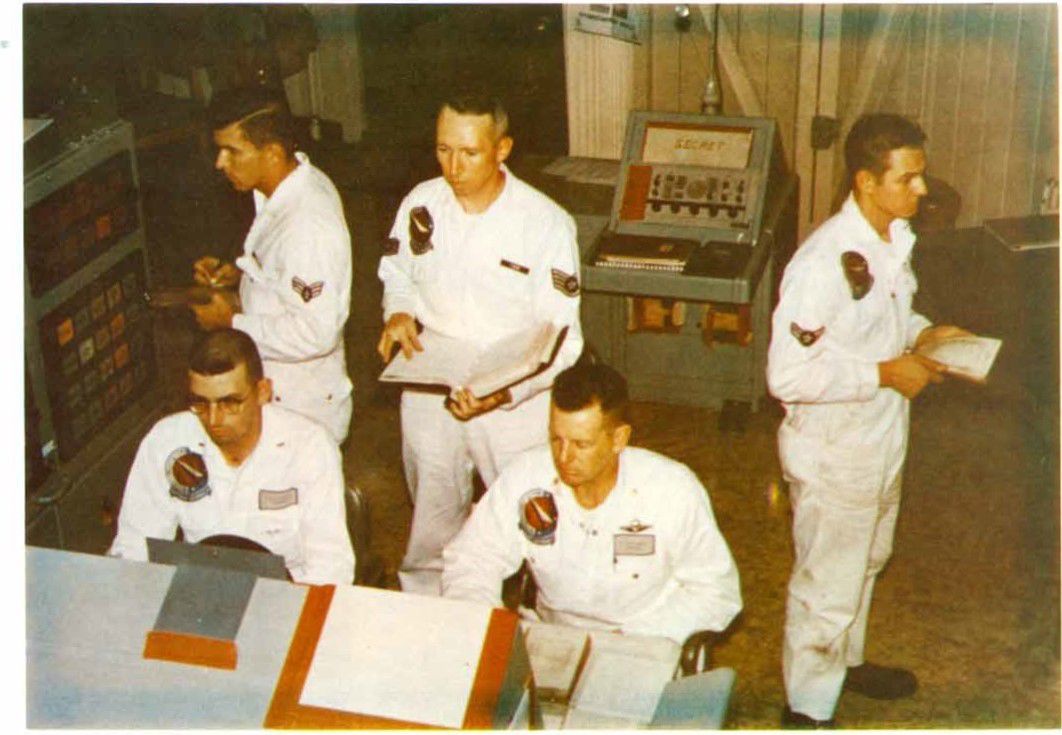 One of the missile crews from the 577th Strategic Missile Squadron at Altus Air Force Base inside the launch control center of an Altus-area Atlas F missile site, circa 1964.

Symbolic groundbreaking ceremony for the Altus-area missile sites, May 20, 1960, including the mayors of Altus and the twelve communities where the sites were located.

Atlas F missile being delivered to one of the Altus-area missile site silos in Southwest Oklahoma.

One of the missile crews from the 577th Strategic Missile Squadron at Altus Air Force Base inside the launch control center of an Altus-area Atlas F missile site, circa 1964.

In light of occasional North Korean nuclear saber rattling and the recent World War III social media frenzy over conflict with Iran, we would do well to remember that Oklahoma figured prominently in the nation’s Cold War nuclear arsenal beginning 60 years ago last month.

In January 1960, Oklahoma’s U.S. Senators Robert S. Kerr and Mike Monroney, along with Oklahoma Congressman Toby Morris, announced that Altus Air Force Base in Jackson County would serve as the hub of 12 Atlas F intercontinental ballistic missiles that would be housed at separate communities within 40 miles of the base.

The Cold War was raging, and what ultimately became a 45-year ideological conflict between the United States and the Democratic West on one side and the Soviet Union and the Communist East on the other had not reached its midpoint in 1960. When the Soviets got the atomic bomb in 1949, the Cold War intensified. When the Soviets tested its first thermonuclear device in 1955, it intensified again.

Then, in rapid succession in late 1957, the Soviets launched the world’s first ICBM, then Sputnik, the world’s first artificial satellite. Tremendous pressure was placed on President Dwight D. Eisenhower’s administration to complete development of the first American ICBM.

And the Atlas missile was born.

A symbolic groundbreaking ceremony for the Altus-area Atlas missile sites was held May 20, 1960, at Altus AFB. The mayors representing Altus and the 12 nearby communities where the missile sites would be located participated.

Each site cost approximately $21 million to build. Adjusted for inflation, the price tag would be about $180 million today.

The Atlas missile was 82.5 feet long and 10 feet wide. It weighed 18,000 pounds empty and 267,000 pounds when filled with its liquid fuel. The missile could fly between 6,400 and 9,000 miles. If fired from their Altus-area sites, the missiles would have arrived in the Soviet Union in less than 45 minutes, inflicting massive destruction.

Each Atlas F missile carried a 4-megaton (equivalent to 4 million tons of TNT) nuclear warhead that was more than 200 times more powerful than the atomic bombs that the United States dropped on the Japanese cities Hiroshima and Nagasaki at the end of World War II.

The Army Corps of Engineers oversaw construction of the massive sites, which was an enormous undertaking. Each missile was stored vertically in an underground silo that was 174 feet deep and 52 feet wide. Each silo was built of extremely heavily reinforced concrete that was poured over rebar to withstand a Soviet nuclear blast at the surface. Silo walls were nine feet thick at the top down to 30 feet below ground surface where they began tapering downward and were 2½ feet thick at the bottom.

Within each silo, a huge metal structure the equivalent of a 15-story building called “the crib” was installed to support the missile and allow for maintenance.

Each vertical silo included 65-ton hydraulic doors at the top which were flush with the ground surface when closed.

A 50-foot tunnel connected each silo to the Launch Control Center (LCC) where a five-person U.S. Air Force crew lived around the clock. Outfitted with kitchens, showers and beds on one level and the technology to fire the missile on another level, five-person crews would live in the LCC working a 24-hour shift, then return to Altus AFB for 48 hours.

Building missile sites was dangerous. Oklahoma was one of six states — along with Texas, Kansas, Nebraska, New Mexico and New York — to house Atlas F missiles. Other ICBMs, such as the Titan, were also housed in several states. Nationwide, more than 50 men died building ICBM sites.

Three men died building the Altus-area sites. Two men fell to their death at the Cache and Fargo, Texas, sites, and a man was electrocuted at the Hobart site on his first day of work there.

Site construction began against a backdrop of growing international Cold War tension between the United States and the Soviet Union.

The May 8, 1960, Altus Times Democrat carried a page-one story about the downing of American pilot Francis Gary Powers’s U-2 spy plane over the Soviet Union. The story relayed that Soviet leader Nikita Khrushchev called Powers a spy for U.S. intelligence and recommended that he be tried for espionage. He was put on trial, found guilty and sentenced to prison and hard labor.

The day after telling its readers about Powers, the Altus newspaper announced that work had begun at the Lone Wolf missile site.

Six weeks after the April 1961 Bay of Pigs invasion that was authorized by President Kennedy, the first completed missile launch site at Snyder was transferred from the Army Corps of Engineers to the Air Force.

The October 1962 Cuban Missile Crisis was the closest that the United States and Soviet Union came to nuclear war. When the Kennedy administration learned that the Soviet Union was placing nuclear missiles in Cuba that were capable of reaching most of the continental United States, all 12 Altus-area Atlas F ICBMs were placed on alert for the first time.

Oklahoma and the world was spared a nuclear conflagration, though Oklahomans near Frederick received a scare when the missile there exploded May 14, 1964. Fortunately the warhead was unaffected, and there were no injuries or fatalities. But the force of the explosion blew the 65-ton doors off their hinges. The site was destroyed and permanently closed.

The following November, Secretary of Defense Robert McNamara announced that the Atlas program would be phased out by June 1965.

The Atlas sites were decommissioned and sold to private owners. School districts at Snyder, Hollis, Granite and Fargo, Texas, own the site properties at those locations today.

When President Kennedy went on national television the evening of October 22, 1962, to tell the nation of the Soviet missiles in Cuba, he issued a warning to Soviet leader Nikita Khrushchev.

That “full retaliatory response” would have included firing the 12 missiles near Altus Air Force Base.

The Cold War was dangerous. And Oklahoma played a key Cold War role beginning 60 years ago this month by housing ICBMs that were a vital part of the nation’s nuclear deterrent during the most dangerous years of that most dangerous era.

Landry Brewer is Bernhardt Assistant Professor of History for Southwestern Oklahoma State University at the Sayre campus and is the author of “Cold War Oklahoma.”