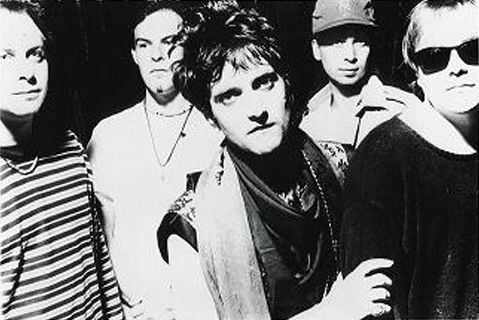 A black and white promotional photo of The Chainsaw Kittens from the period of the release of their debut album “Violent Religion.”

Tyson Todd Meade, second from left, and his bandmates in The Chainsaw Kittens at the ready to reach 1990s alt-rock stardom. While they didn’t meet the peaks projected, they cut an indelible mark in Oklahoma music history during their decade.

A black and white promotional photo of The Chainsaw Kittens from the period of the release of their debut album “Violent Religion.”

Tyson Todd Meade, second from left, and his bandmates in The Chainsaw Kittens at the ready to reach 1990s alt-rock stardom. While they didn’t meet the peaks projected, they cut an indelible mark in Oklahoma music history during their decade.

The Chainsaw Kittens were one of those bands that just missed its destiny as one of the biggest bands of the 1990s.

Following on the wheels of Defenestration, Tyson Todd Meade was as close to his dream as a man could get. But even when you touch the brass ring, it doesn’t always come lose into your hand.

“I always thought I was supposed to be this famous rock star,” he said. “Music was my life. Music is my soul.”

But the memories of the adventure would prove the substance of legendary life stories for Meade.

Immediately after Defenestration’s break-up, Meade was put into contact with Trent Bell’s fellow high school seniors who were jamming and needed a singer. Although almost a decade their senior, he said their musicianship was top notch and they blended as if meant to be. It was fate’s fortune in finding each other. Practicing in the drummer’s bedroom at the parents’ house, Meade’s songs found their home with the young musicians, that would include Bell on guitar.

“When they played my song, ‘Mother of the Ancient Birth,’ I was completely wiped out,” he said. “Something about their youth gave it a fire it didn’t have before.”

In a matter of three months, they would have their first record deal with Mammoth Records. Meade called it a “magical time” although at times it could be frustrating while attempting to book shows outside of Norman. Then they played Chicago on the heels of their first album, “Violent Religion” and they found an audience that included fans turned friends The Smashing Pumpkins. The album was borne from a concept that he had, from “art to finish” — one of his self-portraits adorns its cover. The sound was ready for the airwaves with its chainsaw guitar riffs and catchy vocal hooks.

“We happened to be kind of on the wave of stuff that was going on but we were still different because we were way more flamboyant,” he said. “We weren’t wearing flannel shirts and that sort of thing.”

Their live shows were always a sight to behold. Ever eclectic as it was electric you didn’t know what you would get other than pure energy. With a sound that matched its name, The Chainsaw Kittens were equal parts Jane’s Addiction, Cheap Trick and a buzzsaw live. Bodies flying from stage to waiting arms were part of the show. But for all the power of most sets there would be those unpredictable shows that bordered on anarchy. Meade would concede that a burgeoning alcohol addiction added to the chaos.

The album “Flipped Out In Singapore” was produced by Butch Vig before he became the known heavyweight producer he is now. Meade said it was a match made in heaven and “it was the best experience.” Vig was talked into taking the job by Billy Corgan during production of Smashing Pumpkins’ “Gish” album.

Meade said the band was with Vig and watched the premiere video of the Nirvana song that would open the floodgates of early 1990s alt-rock. He believed things would move his band’s way in the wake. Industry insiders were saying the same things. He knew it was a time for a sea change from what had been standard radio rock.

“The Winger and the Warrant and the stuff at the top of the charts, the stuff we were rebelling against ourselves,” he said, “‘Smells Like Teen Spirit’ broke and just washed all that stuff away. It was historically amazing because we all knew something was afoot, if I say so.”

Corgan got his booking agent to take the band as a client and major labels were calling on The Chainsaw Kittens. Meade was ready to answer. The Oklahoma City area was one of the places label agents were seeking to be the next Seattle. It was a vibrant time that saw the Kittens and Flaming Lips joined by The Nixons and Wakeland with signing record deals.

“We were just perched to be like this next big thing,” he said. “It’s completely crazy because everyone I talked to loved our record and said ‘Oh my gosh, this is going to be a gold record.’ To even think something like ours would become a gold record. But that didn’t happen.”

But it seemed like a good possibility. A ferocious opening set for Jane’s Addiction in Oklahoma City garnered the band notice and a small feature in Rolling Stone. It’s another one of those “almost” moments.

The directing debut of Spike Jonez was this catchy single from the album: •Chainsaw Kittens — “High in High School” — https://youtu.be/jzGX3EBg954.

The band remained in proximity to that main stage spotlight. Meade called it a “whirlwind.” They were on the go, performing across the nation, traveling to Los Angeles one minute and New York City the next. He said “it just got crazy.” That included the frontman’s drinking habits. He said Bell served as his protector and he’s a big reason why he’s still alive.

But after the album, only Meade and Bell remained from the original line-up. Mammoth Records said as long as Meade is part of the project, “It’s still The Chainsaw Kittens.” The band added Matt Johnson on bass and Eric Harmon on drums and it was a perfect fit for the “Pop Heiress” album to follow.

Meade said if this had been the lineup from the start, he’s confident the band would have blown up. Most of that credit goes to the late Harmon who “had a metronome in his head and was never off beat. … He was a maniac, he was this handsome gorilla playing the drums.”

Out of nowhere, Meade said that Atlantic Records merged Mammoth into its fold and the album was to be released.

“Out of nowhere we were on a major label,” he said. “My whole life dream came true but I didn’t even realize what it meant.”

The band was so close to its realization of success, Meade said he could taste it. Countless trips to Los Angeles and New York City included moments of living pure rock stardom. At least it felt that way for a bit.

They had a publicist who knew how to get them heard by the right people, including Lisa Robinson. She “basically discovered The Ramones,” he said. A tour with Iggy Pop would also be on the agenda. They were at a peak musically and with potential.

The reality of the business side of the music biz would reveal itself with the release of the album.

Atlantic had a deal with Mammoth Records as well as several other small labels. It was part of the 1994 vacuuming up of indie labels in the hopes of cashing in on the next Nirvana. Meade said there ended up being about 300 albums that came out that year.

“It was really nuts,” he said. “Anyone who didn’t just get out of the gates doing well got pushed aside.”

Next week covers the fall of one dream and the opening of vision for Meade to dream again and even bigger.

This week’s Songs for the Sequestration Series is for the 100,000 who’ve fallen to this plague: •Queens of the Stone Age — ”Song for the Dead” — https://youtu.be/dOsmG-sufNc.

#VirtualSoundemoniumFest Showcase Part 2 was the star of this week’s Today’s Best Soundemonium! with Steve Carr, a.k.a. Steve-O, and the columnist. Amazing local musical moments from online shows and recordings made from the sequestration followed.

Check out this lineup: Bannister Chaava premiere, ”Errant Boy”; Eric “Dirty Red” McDaniel, from May 17, ”Cloudless Day”; Allusion from May 18, ”Something in the Way”; Gannon Fremin from April 25, ”Fade Away”; Ciera MacKenzie from April 10, ”White Rabbit”; and Robbie McMillan & The 101st Airborne Division’s Rock Band from May 19, ”Fortunate Son.”

Jokey McJokerson’s offered a butt of a joke: