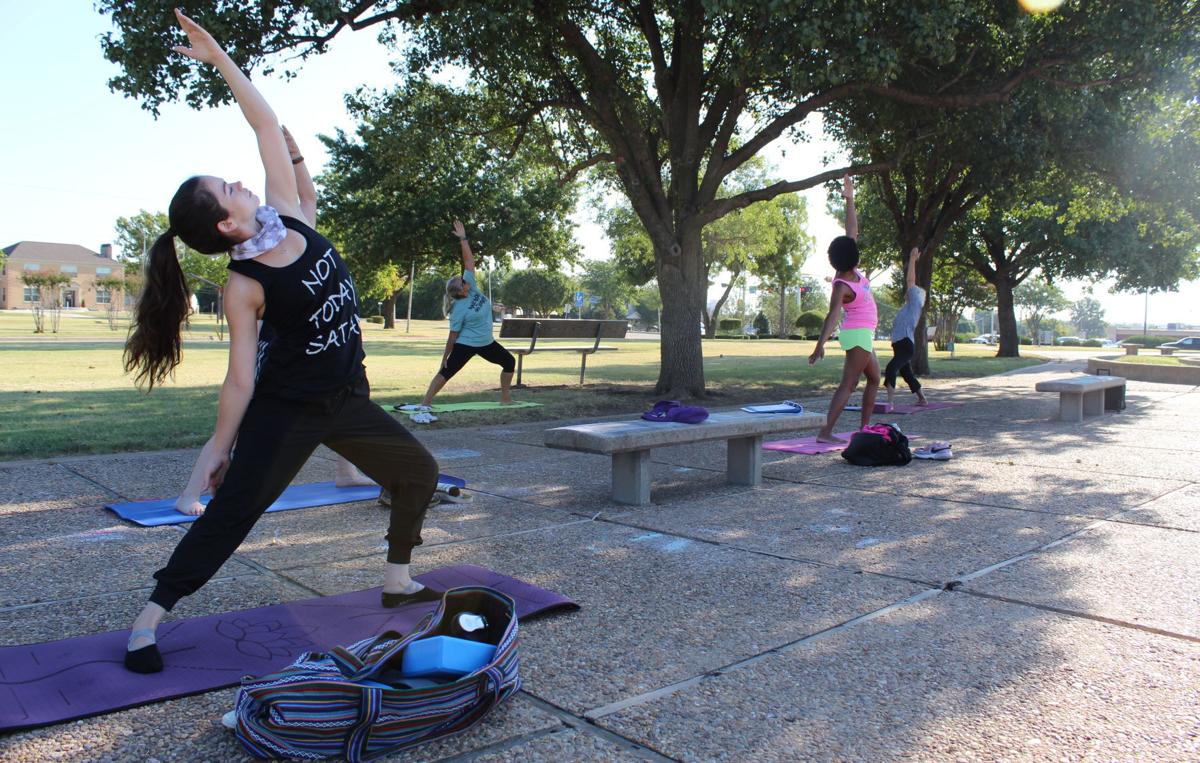 Gabrielle Riley, foreground, closes her eyes and follows the flowing motions of Warrior Pose during yoga in the park in downtown Lawton. 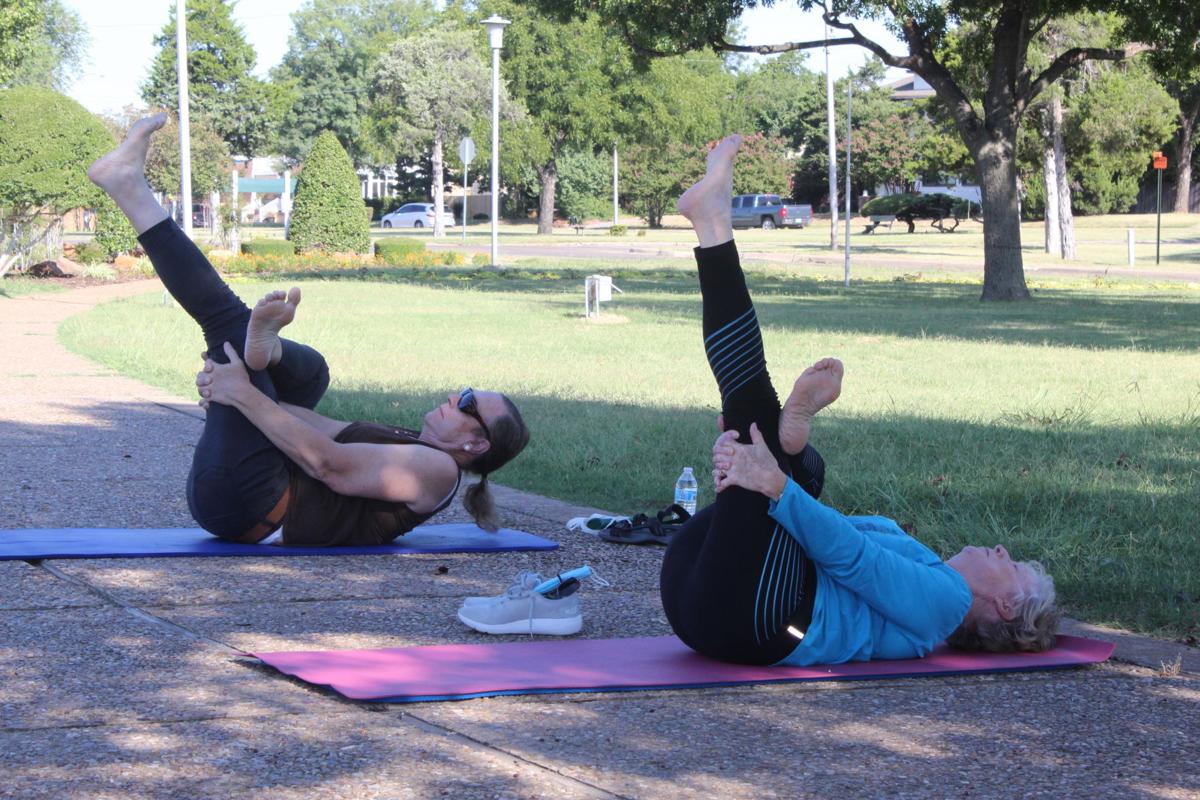 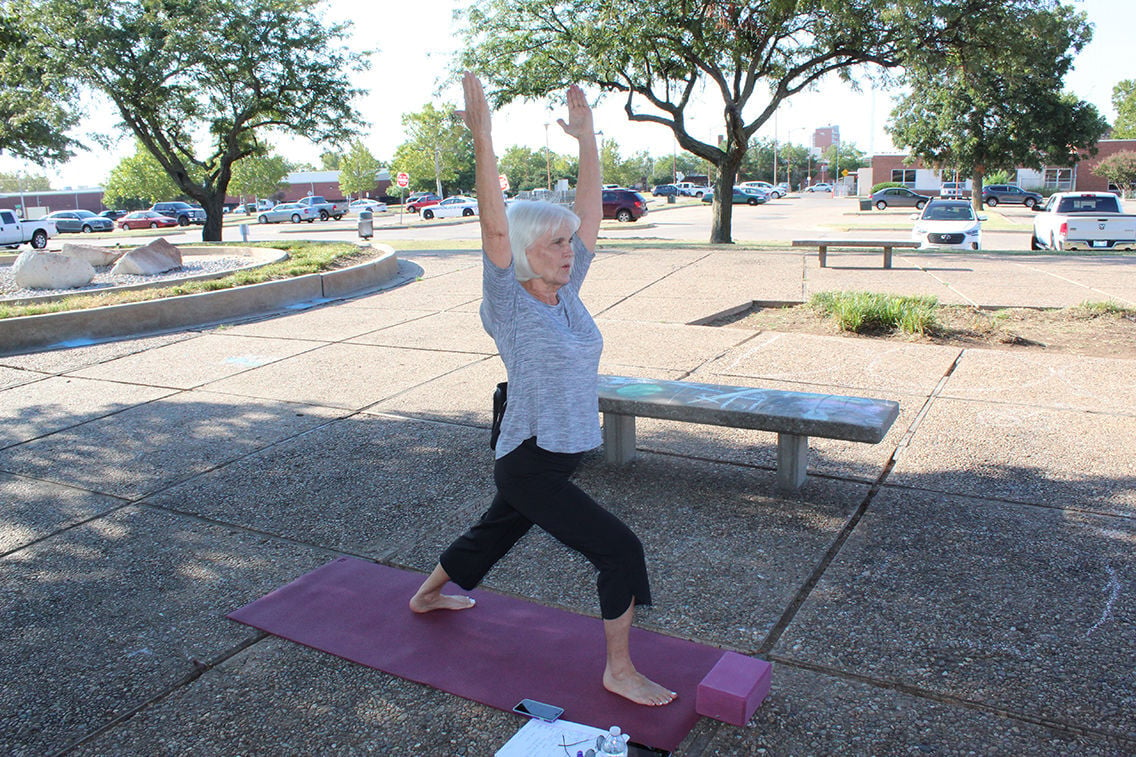 Gabrielle Riley, foreground, closes her eyes and follows the flowing motions of Warrior Pose during yoga in the park in downtown Lawton.

Stretch. Breathe. Find your center. Listen to the birds. Ignore the weed eater in the background. Such is the way of yoga in the park.

Normally, this Monday/Wednesday/Friday class is offered indoors in the mornings, but thanks to COVID-19 was relocated into the great outdoors. Or at least as outdoors as you can get in the middle of downtown Lawton.

“The nice thing about yoga is that you can pretty much do it anywhere, anytime, and you don’t need anything to do it,” Kolker said. “It’s wonderful doing yoga outdoors.”

In the shade of the trees that line Shepler Park, Kolker unfurls her mat and takes her class through a series of stretches beginning with Warrior Pose, a standing stretch.

“We’ve been blessed during July and August to have fresh air and shade, but you know how Oklahoma summers are. I actually like being outdoors underneath the trees. Some people might be inhibited being outdoors, but those that are true yogis at heart show up at their best,” Kolker said.

One of those yogis is Gabrielle Riley, a young mother who has been attending Kolker’s classes for two years and recently began to teach yoga classes of her own. Riley’s experience shines through as she moves like a dancer through the poses.

“When I started yoga, I had just had my baby and was having a hard time getting the weight off after the pregnancy. I was having circulation problems where I started getting numbness in the left side of my body,” Riley said. “Just doing yoga helped me lose my baby weight. I didn’t even really have to go to the gym. I don’t run. I do fast walking, but I don’t run. I really lost a lot of my maternity weight from yoga.”

But it wasn’t just baby weight that yoga helped Riley recover from. After her child, she suffered from postpartum depression. She credits yoga with helping her recover.

“I had a lot of depression from having a baby. Yoga helped me level back out my serotonin and focus more on healing myself rather than dwelling in myself,” Riley said. “A lot of times we forget to take slower breaths, so we are in constant anxiety all the time. If we can control our minds, we can make better decisions for ourselves.”

When she started yoga with Kolker, classes were held inside with dozens of other students. Now that classes have moved outside, Riley can reflect on nature while she practices, a process that has helped ground her.

“It connects you back to the Earth and reminds you that we’re guests here and we’re not in control of everything,” Riley said. “It gives you time to be with the birds and notice the changing of the sun throughout the year.”

The Lawton Family YMCA hosts yoga classes five days a week taught by Kolker, Riley and others. For more information, call the YMCA at 355-9622.