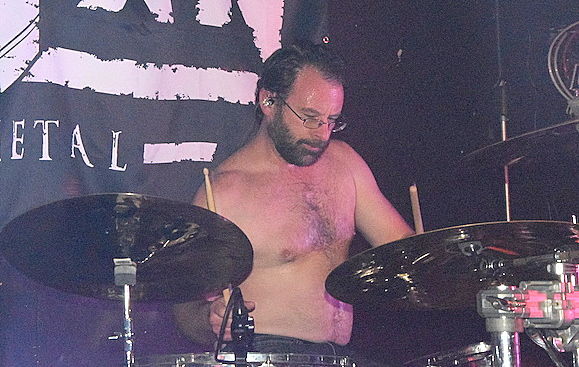 With Titan Metal, Southern Aggression, Nacho Kart or with any other ensemble, David Dodson is living his best life behind his drum set, making music and friendships for a lifetime. 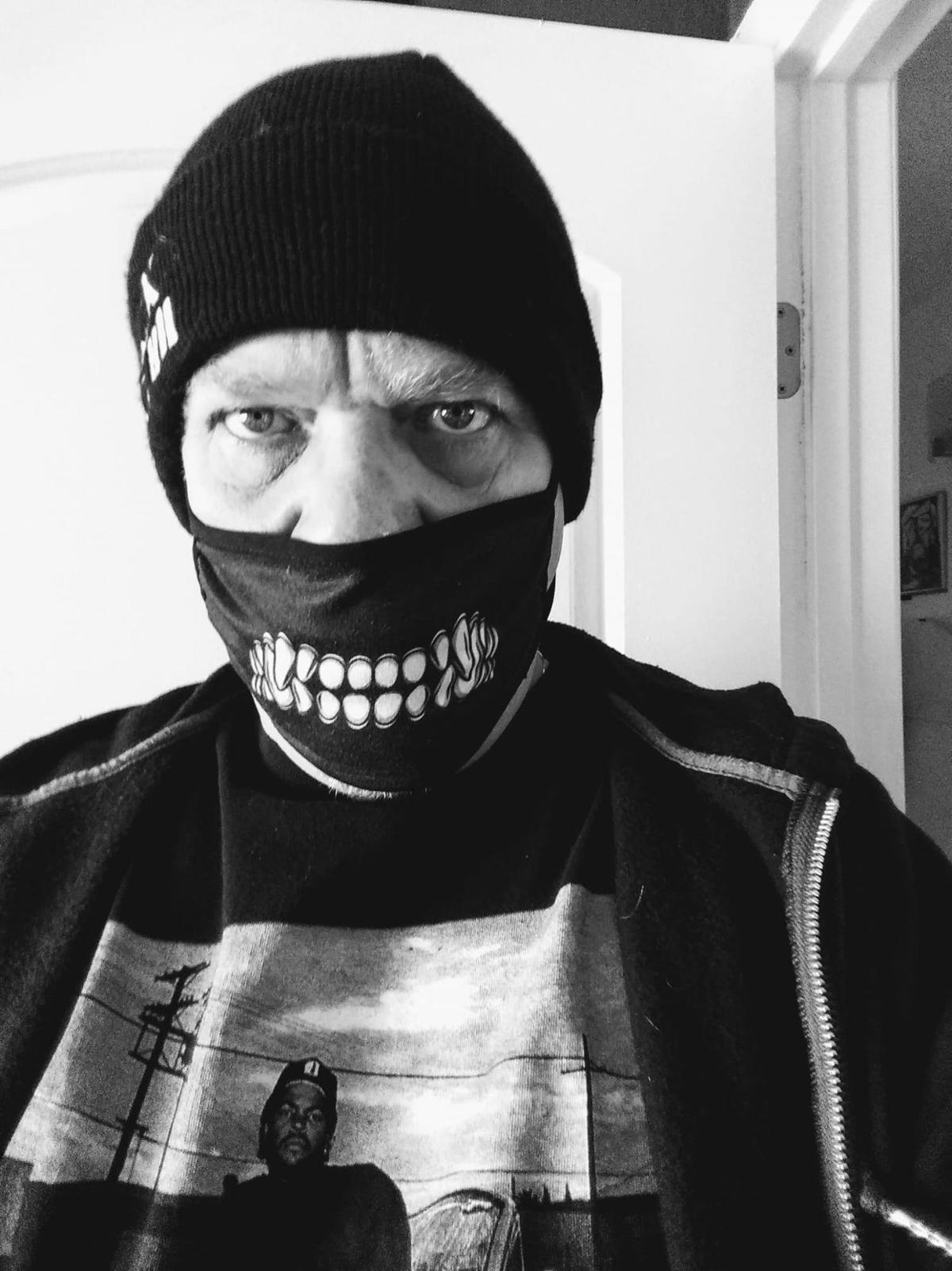 With Titan Metal, Southern Aggression, Nacho Kart or with any other ensemble, David Dodson is living his best life behind his drum set, making music and friendships for a lifetime.

One has kept his beat while pounding the percussion. The other has moved to guitar to sound his punk rock revelations.

David Dodson has been beating things rhythmically to make his mark in the local metal scene for a while. A love of rock and metal music drove the urge to march to his own beat. His father and brother opened the inspiration.

“I’ve been playing for about 30 years now,” he said. “I got into drums because my brother started playing drums and guitar when I was around 8-years-old.”

There was no YouTube then, so learning to “air drum” to videos on MTV paved the path. Dodson said it wouldn’t take long for it turn to the real thing. Following his parents’ divorce while he was in third grade, his trips back to Oklahoma would allow him time with his brother’s drum kit.

“Luckily my dad was really cool about letting me play the drums after school everyday so I taught myself how to play by listening to the first Rush album on record,” he said.

In seventh grade, Dodson and two other friends decided they were going to form a band. That was the beginning of “band life,” he said. His first real band was Dementia. A few years later would be his first real step into the local scene in the early 2000s with The Final Step. A couple of albums and line-up changes would follow.

“We played alongside with bands that started this newer metal scene here,” he said. “Since then, we’ve played some big shows and helped shape the scene at the historic Railhead Saloon.”

The Railhead Saloon was always the center of this music universe. That’s where, Dodson said, he met with Dakota Hooper while working on the Nacho Kart does Pantera project. From that friendship bore the fruit of more partnerships.

Hooper, who was playing guitar with Titan Metal, suggested Dodson to fill the role band founder Dayton Keel formed by recording both the drums and his guitar parts for the debut EP. After learning the material, he has since become a writing partner with Keel for new material.

Dodson said he’s also working with Hooper and Nacho Kart singer Garrett Glass on a super-secret new project that’s taking shape. Drums are the life-partner; it’s always been there for him, he said.

“Drumming has and always will be the one constant in my life,” he said. “I didn’t exactly have a lot of friends growing up and drums has always helped me through. Playing in bands with the people I have has shaped me into the musician that I am today and those same people are my best friends.”

The pandemic has put the kibosh to one of the best parts of being a musician: performing live, Dodson said.

“It’s a little hard to plan for shows right now,” he said.

For a brief moment on March 6 that’s going to change when Southern Aggression performs with Texas Hippie Coalition at the Red River Music Hall in Altus.

Then it’s back to the studio with Southern Aggression. Dodson said new Titan Metal material is in the works to be recorded for an EP in the very near future. The secret project with Hooper and Glass shouldn’t be far behind. He said 2021 is looking like a bright year, one way or the other.

“So, all in all, the projects/bands are doing great things,” he said. “I think you’ll be seeing a lot more out of me very. very soon.”

A religious epiphany led to a rock and roll revelation for an old punk rocker from Lawton. He said it is definitely a time for message-based punk rock to rise up.

Now living in Albuquerque, N.M., Rob Duncan has taken the past year’s quarantine to pick up his guitar and play. Playing guitar under the name of Rev. Jones and taking an alter-ego in a bathrobe by playing bass as Malachi, he was joined by a Seattle, Wash., drummer named “Sparkles” who recorded his tracks and sent the files online to his collaborator. It’s a long way from how it was done when he played drums for the seminal horror punk outfit Day of the Sick.

Duncan said he’d became inspired. While coming to terms with a perceived duality between his Christian faith and punk rock roots. Politics and passion collided with his spirituality and the project germinated. It came together as the 10 track instrumental collection from Rev. Jones & The Koolaid Choir, “This Machine Kills Fascists.”

Recorded between Feb. 6-11 at his home studio, Deth Lab, the muse pushed the music with an intensity, Duncan described. Production began with downloading the drum tracks. But there was a step preceding.

“I prayed before recording anything,” he said. “I lit candles and incense and gave thanks to God. Mostly I asked that my music honor the Lord and express what was in my heart. I feel like the Holy Spirit moved my hands for me to find the notes that said what I can’t put into words. I don’t know any other way to explain how I play guitar with a jacked-up ring finger and pinky that just kind of hang there like useless meat.”

It’s part of the process following a 2014 move from Lawton as “a broken shell of a man with carpal tunnel syndrome” that Duncan said ended his drumming career for a time. A bad liver and a death wish added to his burden. He said it led him to an enlightenment.

“I went through literal and figurative hell before anything like light appeared at the end of the tunnel,” he said. “On the morning of Jan. 1st, 2016, I got on my knees and asked Jesus Christ unequivocally to come into my life. I do not touch alcohol these days as described of John in Luke 1:15.”

Recovery from alcoholism, PTSD and a sense of nihilism has been a “long and interesting journey,” Duncan said. It led to this album. It’s also led to a return to living a vibrant and meaningful life that he enjoys every day. It’s called spiritual healing, he said.

“The Gospel tells me there is more rejoicing in Heaven over one lost sinner found than for the 99 that did not stray,” he said. “’Amazing Grace' was the first song I recorded when I got the Tascam (recorder). It just seemed like the right thing to do first. He did indeed save a wretch like me.”

Duncan followed the punk rock approach to confronting what he sees as wrongs in the world through buzzsaw guitars and galloping riffs. That means politics, the police and moral hypocrisy prove ample fuel for his fire. Tracks like “Racism is Sin” and “The Fascist Next Door” to one of my favorite tracks, “Karen’s Calling the Cops,” highlight this instrumental message machine.

It’s fitting that another Oklahoman who railed against inequity is as much an inspiration for the album as anything that’s followed the Sex Pistols’ debut. Duncan said it’s very much a product of our times.

“The album title of course is a reference toward Woody Guthrie’s guitar,” he said. “I felt like it was a good title for 2021. The rise of fascism in the world is troubling.”

Music can sometimes affect change. Duncan believes this is a time for needed progression in our nation. He’d like his music to be among its soundtrack for something better. Hypocrites won’t be tolerated.

“I believe that racism and other forms of dehumanization are the great sins of the United States, and that far too many Christians practice or accept racism in their lives,” he said. “It’s time to eradicate the cancer of racism from our society.”

An extra track, “If Anyone Thirst, Let Him Come to Me and Drink,” is what Duncan called “instrumental punk praise and worship music.” It’s uncompromising, like his faith in God and in punk rock.

“I am the lost sheep from Luke 15:6-7,” he said. “I make no apologies in the punk rock world for being a Christian. This song only appears on the YouTube version of the album. It’s for the Lord and not for sale as part of the album.”

The album is also available on soundclick.com and bandcamp.com.

This week’s Song for the Sequestration is for beloved Lawton musician Rafael Montez who is currently undergoing health problems. My friend, you deserve the beauty of Chris Cornell singing Bob Marley’s ”Redemption Song” to help with the healing: https://youtu.be/Dz45L5vglhw.