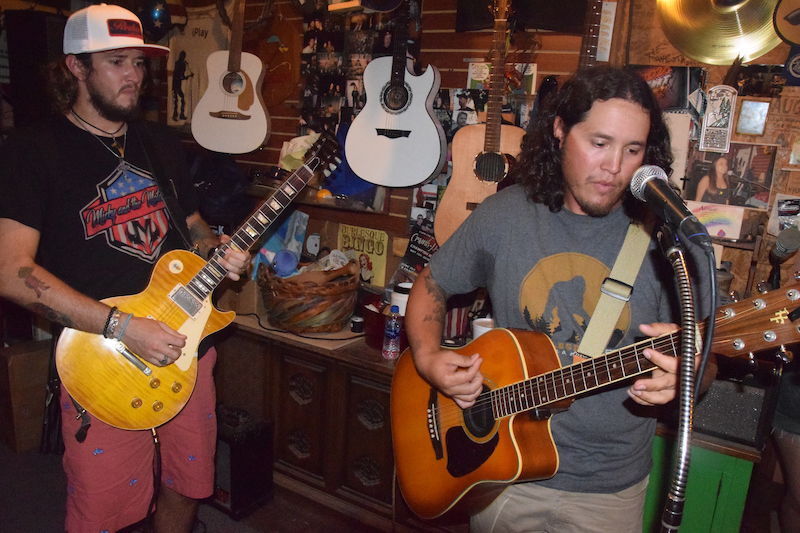 Performing with Shyloh Powers, left, at the legendary Drum House in Elgin in September 2019, Ryan Tyler gained notice from the local music community. 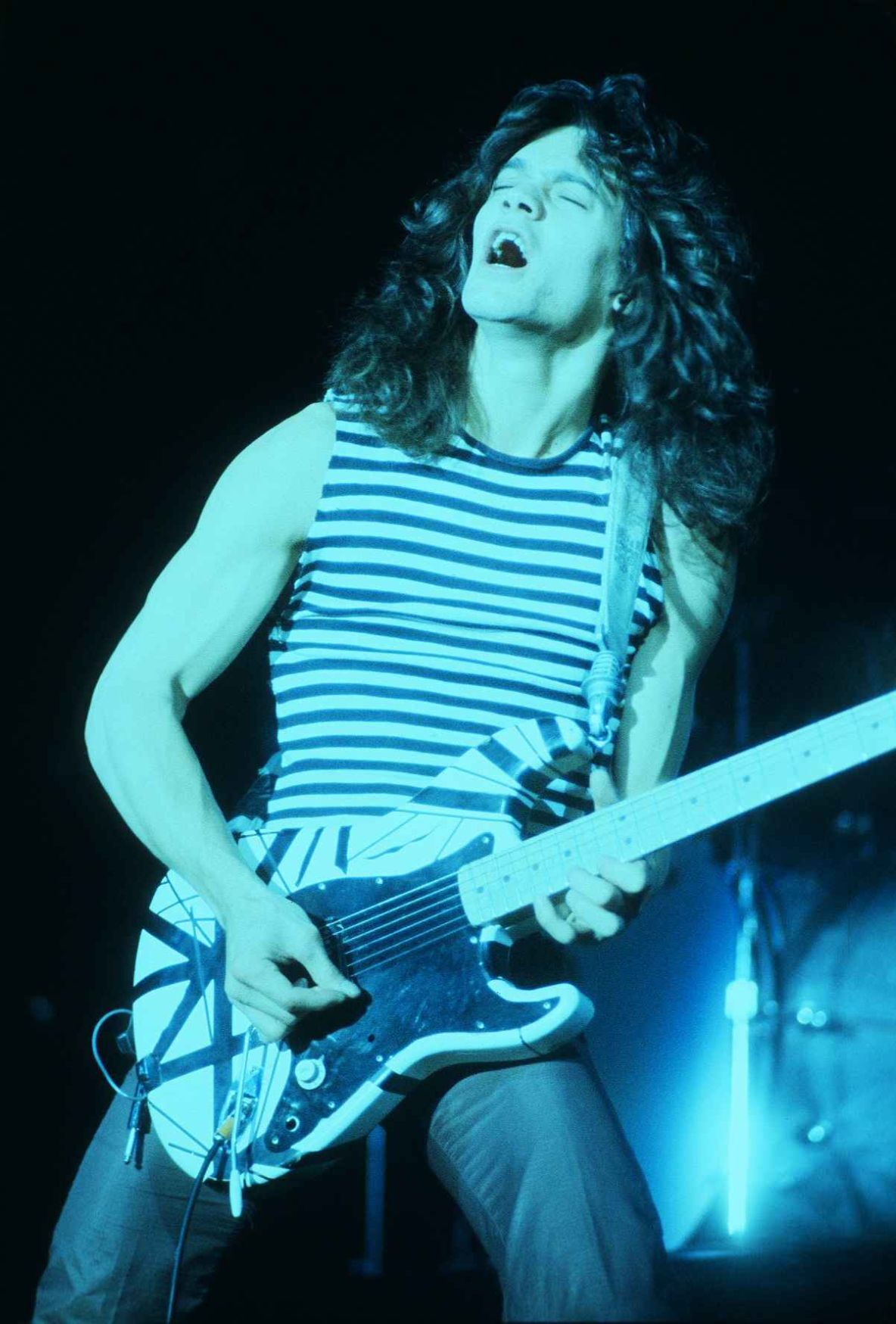 In his prime with guitar in hand and magic at his fingertips, Eddie Van Halen revolutionized the instrument and inspired millions.

Performing with Shyloh Powers, left, at the legendary Drum House in Elgin in September 2019, Ryan Tyler gained notice from the local music community.

In his prime with guitar in hand and magic at his fingertips, Eddie Van Halen revolutionized the instrument and inspired millions.

The past 12 months have been big ones in the musical journey for Ryan Tyler who’s the columnist’s log for newcomer of the year in a tough year to break in.

The radio show first ran into Tyler in September 2019 out at Larry Chrisner’s legendary Drum House in Elgin. Slinging an acoustic guitar and with a quiet demeanor, the talent from Tipton displayed itself during a jam session that saw him trading leads in the Drum House No Jug Jug Band with Chrisner and the mighty Shyloh Powers, currently the lead guitar-slinger for Koe Wetzel’s band. Tyler held his own on “Crunchhouse Drum: https://youtu.be/oO9OznVJxiQ.

Remember, in the online edition, you can click on the video links and go directly to the song on YouTube.

He joined Steve-O and the columnist in Studio Blanket/Tent Fort in November 2019 where he displayed his acoustic singer/songwriter chops with a couple of songs, “Mine” and “The Darkness At Your Door” and really made a moment to shine: https://youtu.be/sG0IwWMmz3o.

But Tyler’s more than a sensitive acoustic guy. Influenced heavily by Alice In Chains, Nirvana, Kyuss and a plethora of groove heavy, metal and hard rock bands, he knows his way around an electric guitar and a slinky, distorted riff. During a #VirtualSoundemoniumFest online shows in late-March, Tyler offered a high point with his take on the Mad Season classic, “River of Deceit.” It made an impression.

With live performances put to a sort of standstill, it knocked a little bit of wind out of the sails as Tyler and his bandmates in Chasing the Coyote, Travis Flood on vocals, and Brett Gallant on drums, put out their eponymous debut EP. The five-track collection tells a mystical story of a gunslinger cut down in his prime. Resurrected and turned into a shapeshifter, this collection has a cohesive storyline while still rocking out. Check out the track “Wendigo,” which world premiered on the radio show Thursday evening; it packs a punch and closes the album strongly: https://youtu.be/N2XZaaC5pu4.

With the EP released and the search on for a full-time bass player, the guys are pawing the dirt in anticipation for their first live show. COVID-19 struck right when they were ready to make that impression on local stages.

“We’re really trying to get gig ready when the opportunity presents itself,” Tyler said. “We’re chomping at the bit for it.”

You can find Chasing the Coyote’s music on most online outlets, including YouTube where you can also find more of Tyler’s work.

I can’t even begin to describe how devastating Tuesday’s news of the death of Eddie Van Halen at 65 from cancer is for me and literally millions of rock guitar fans and players.

He was the musician who “really got me” from the second I heard his playing on Van Halen’s cover of the Kinks’ classic. It’s a hold that remains hooked to this day.

But it was the lead-in track that would knock the wind out of mine and millions of other lungs. In 1 minute and 42 seconds, Van Halen inspired millions of hands to pick up guitars and, ultimately, break the concept of guitar solos while reimagining it as cosmic flurry of dexterity, emotion and hormones. It’s the cosmic cataclysm of classical music and punk rock fury. To have seen him perform it live, even once, was akin to a trip to Mecca for devotees of Allah. Here’s a live version from 1982 from his peak: https://youtu.be/zJ6jy3L0B70.

While his musicianship was beyond the pale, the ability to keep his rhythms shuffling with funk and pop precision, coupled with the stellar background vocals by him and bassist Michael Anthony, the band transcended “heavy metal.” This technically untrained musician knew how to fold a hook like a maestro. It’s all apparent on “Dance the Night Away”: https://youtu.be/llfjDUB66Z4.

I had the good fortune to see Van Halen perform four times, once during the David Lee Roth days and thrice with Sammy Hagar at the helm. They were my first and second big rock concerts. They never failed on stage when I was in the audience. When Sammy Hagar’s voice went out early during their 1987 Monsters of Rock show in Dallas, Texas, it was Van Halen and Anthony who took over vocal duties as they returned to the room of a playful cover band. And it was amazing.

I’ve not fallen into the trap of who the true singer of the band has been, they both created magic musical moments with Van Halen at their sides. I still think the Roth era was peaked with the bluesy groove and swagger from the “1984” album, “Drop Dead Legs”: https://youtu.be/ghTeWNrH7mg.

I can’t say what song from the Hagar-era is my fave but “Summer Nights” still holds a special place in my heart: https://youtu.be/xMqfIPjuT5M.

One of the beautiful things about seeing Van Halen perform is that you could see a man in love with every minute he was performing. He had an infectious smile and, for many years, a mountain of hair with a penchant for self-designed guitars and stripes aplenty and he was bold.

The world is less a place right now. Leave it to Van Halen to have taken another tune from the Kinks’ catalogue for my absolute favorite track he ever recorded, “Where Have All the Good Times Gone”(Live at Largo in 1982): https://youtu.be/3CHbFI2Ovc0.

This week’s selection for the Songs from the Sequestration is a cool YouTube series called “2 Minutes to Midnight” featuring Gwarsenio Hall as its host. Each video offers a performance of a wide range of mostly heavy metal musicians joining forces via zoom to cover a wild and interesting mix of songs. Go check out the channel and see if there’s something you like: https://www.youtube.com/channel/UC4Cmvvc9ZmyQ412RzXhYoEg.

The talent and ingenuity on display in these videos, coupled with entertainment value, makes this a treat while we’re all still sort of shut in.

Man, will this year ever end?!? As we hurtle through the unexpected and unknown of a year unlike any other I’ve known and joined with the division of politics that I hope becomes bridged again in the new year, Leonard Cohen’s, “The Partisan” hits a nerve and moves my soul like Ali in his prime: https://youtu.be/hs5hOhI4pEE.

The 199th edition of Today’s Best Soundemonium! with Steve Carr, a.k.a. Steve-O, and the columnist was a treat in being shared with the guys in Chasing the Coyote. I can’t wait for these cats to hit a stage and play live some time soon.

For October, Jokey is finding his “jokes from the darkside.” Here’s this week’s punchline:

#Sundaymonium — Remember that every Sunday night you can listen to a rebroadcast of the prior week’s show followed by this latest show: 6 p.m., Robo-Riffic Rock & Soul Show; 6:30 p.m., Ryan Tyler and Chasing the Coyote.