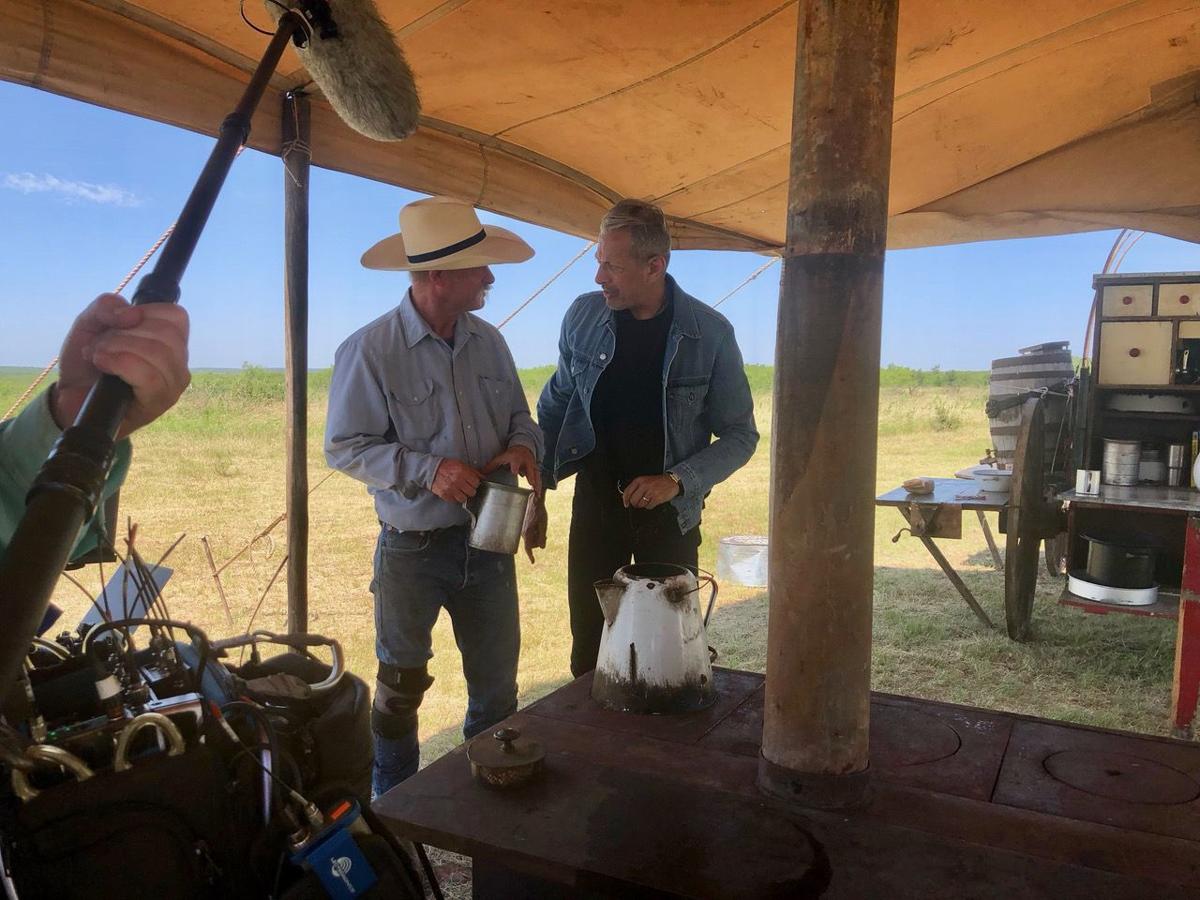 Behind the scenes as Kent Rollins, left, teaches Jeff Goldblum how to make a pot of cowboy coffee on the trail. 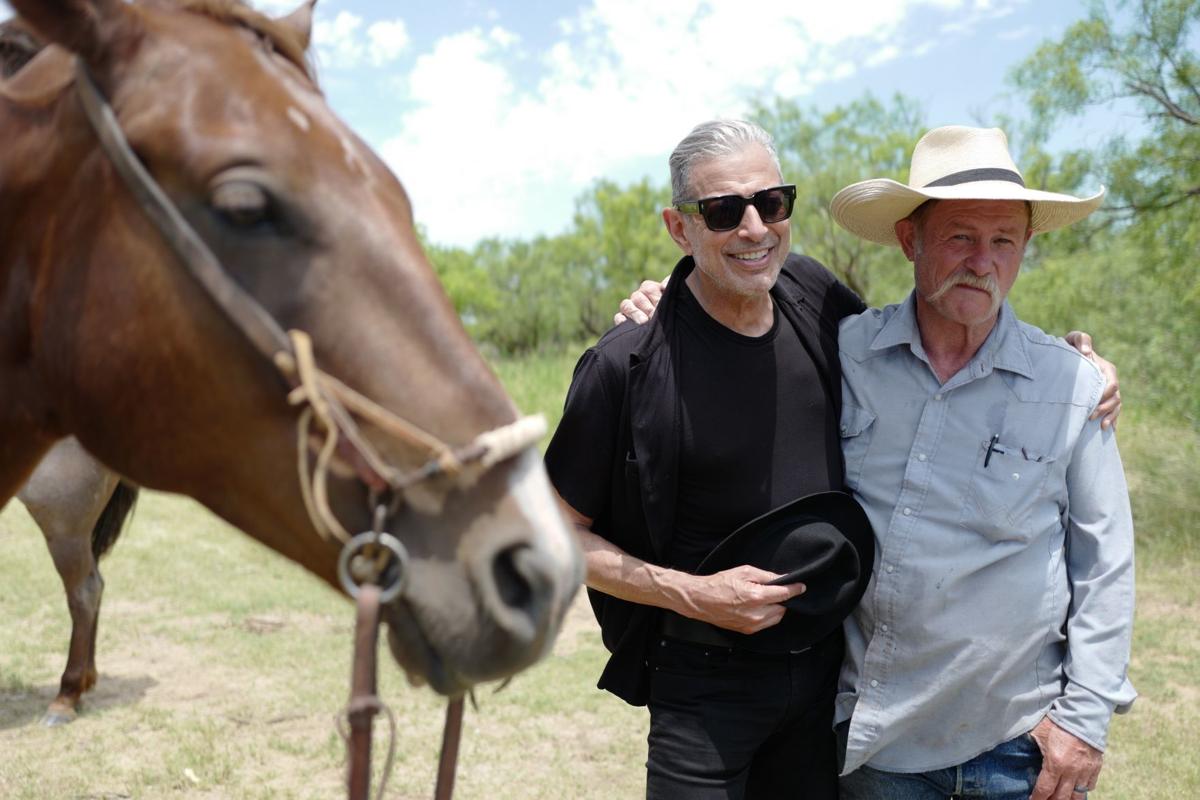 Rollins didn’t have any ponies for Goldblum to ride, but he said he did have a horse. That horse photobombed Rollins and Goldblum as they wrapped the episode.

Behind the scenes as Kent Rollins, left, teaches Jeff Goldblum how to make a pot of cowboy coffee on the trail.

Rollins didn’t have any ponies for Goldblum to ride, but he said he did have a horse. That horse photobombed Rollins and Goldblum as they wrapped the episode.

Rollins was born and raised along the banks of the Red River near Hollis. He grew up helping his father take care of cattle herds and his mother taught him how to cook. It was from her that he inherited his love for food.

“I was lucky to be raised by a hardworking family that understood the finer qualities of life,” Rollins said. “My mother was a great cook. What she cooked she always cooked from the heart. I started to cook with her when I was about 7 or 8 years old.”

Rollins kept on cooking as he got older. He spent time with his uncle making chow for hunters in the Gila Wilderness New Mexico.

In 1993 he bought an 1876 model Studebaker chuck wagon and, over the last 25 years, has traveled the country feeding cowboys and making educational appearances to teach kids about the history of chuck wagon cooking.

Rollins said that when he met his now wife, Shannon Rollins, his operation moved forward by leaps and bounds.

“When Shannon came along, she brought me into the modern age,” Rollins said.

These days the couple focuses on their YouTube channel, Cowboy Kent Rollins, where they enjoy over 820,000 subscribers.

Their internet success has led to Rollins appearing on numerous television programs including the Food Network’s “Throwdown! With Bobby Flay,” where Rollins actually beat Flay with his chicken fried steak.

But the success hasn’t gone to his head. Rollins still continues to enjoy living simply and cooking for cowboys and ranch hands out on the range. And even though he carries a cellphone these days, he keeps it on silent when he’s in the field. Which is how he recently ended up missing a call from the United Kingdom.

The call was from a representative at National Geographic inviting Rollins to guest star in an episode of a new television show the company was producing for Disney Plus, “The World According to Jeff Goldblum.”

“They (National Geographic) explained to me who Jeff Goldblum was, I didn’t have any idea at all,” Rollins said. “When I got home later, I asked Shannon and she said, ‘oh yeah, he was in Jurassic Park.’”

Rollins and the representatives from National Geographic worked on the details, and about two months later the shoot had been scheduled. Rollins was going to be teaching Goldblum how to boil up a traditional pot of cowboy coffee out on the range. Rollins also explained the history of cowboy coffee on the cattle trails in the 1800s along with the vital role that the chuck wagon played in the shaping of the West.

When the day finally arrived, Rollins got up at 3:30 a.m., just like always, and prepared coffee and breakfast for the film crew.

“One thing they told me was they wanted Jeff to ride a pony,” Rollins said. “I told them, ‘we ain’t got no ponies, but we got some horses.’ So we got him up on a calm horse. He introduced himself before we ever got started. He’s got a great personality, he’s very funny. He’s one of those people that, he may not be anything like me, but he’s one of them that’s easy to get along with. He’s good folk.”

When the two got around to making coffee, Rollins said that Goldblum was surprised that he was able to make a pot of coffee over a campfire and have it taste as good as it did.

“He was so amazed that you could make good coffee that way,” Rollins said.

It’s not the first time Rollins has gained popularity for his coffee making. One of his most watched videos on YouTube, with over 2 million views, is about cowboy coffee.

“The art of coffee has been around forever and ever. Jeff and I, when we talked off camera, he told me ‘this is a really old-fashioned way of making coffee.’ I told him it was prehistoric, but he’d know more about that.”

Viewers can catch Rollins and Goldblum’s time on the trail in episode nine of “The World according to Jeff Goldblum,” on Disney Plus. They can also see new videos on Rollins’ YouTube Channel every Wednesday.