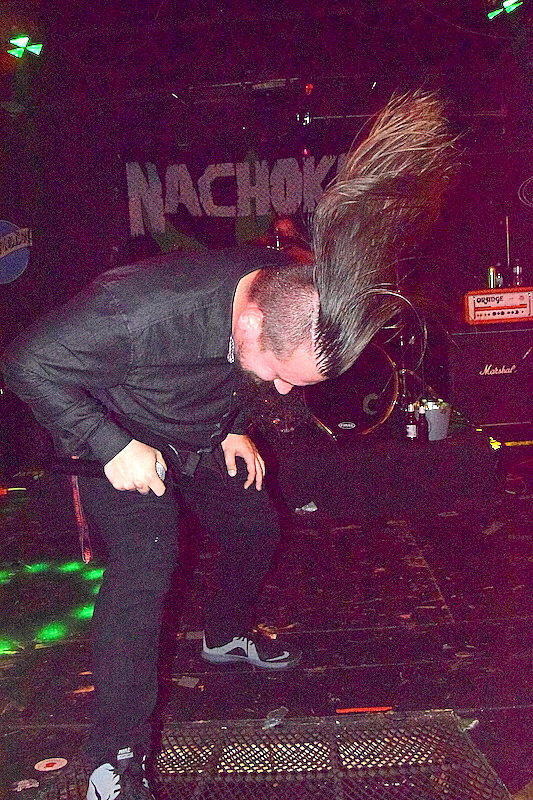 Nacho Kart’s Garrett Glass got 2020 off with a windmill with his bandmates as they blasted into the new year with a power packed Pantera showcase. 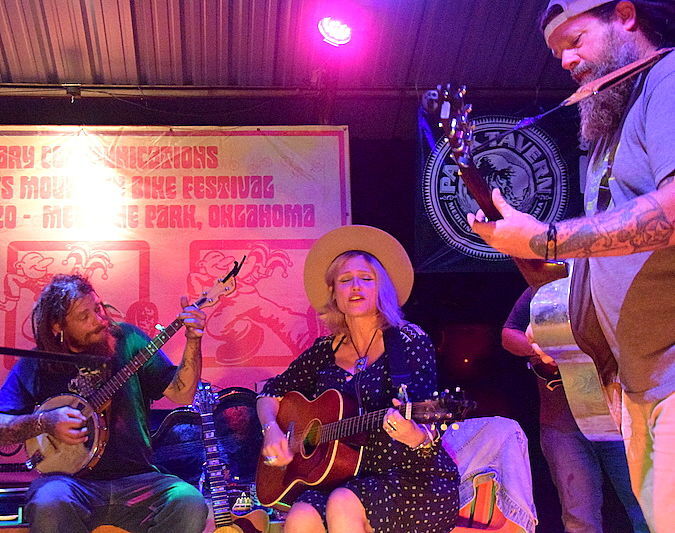 The “Real” MVP Rodney Whaley, right, jams with Sarah Wright and Kerry Hartman during a pre-Park Stomp jam for the column’s radio show. In his first year as event coordinator, Whaley pulled off magic to keep the music flowing through Medicine Park in 2020. 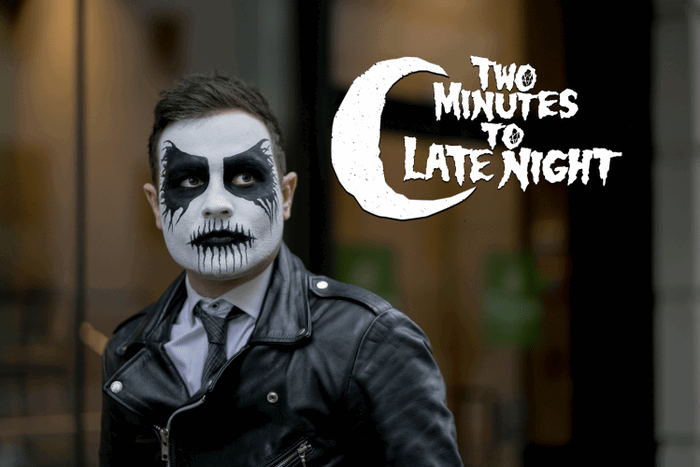 In hosting the online video series “To Minutes to Late Night,” Gwarsenio Hall has helped usher in some of the most fun and inventive music circulating in media, especially in this time where live music is found virtually. 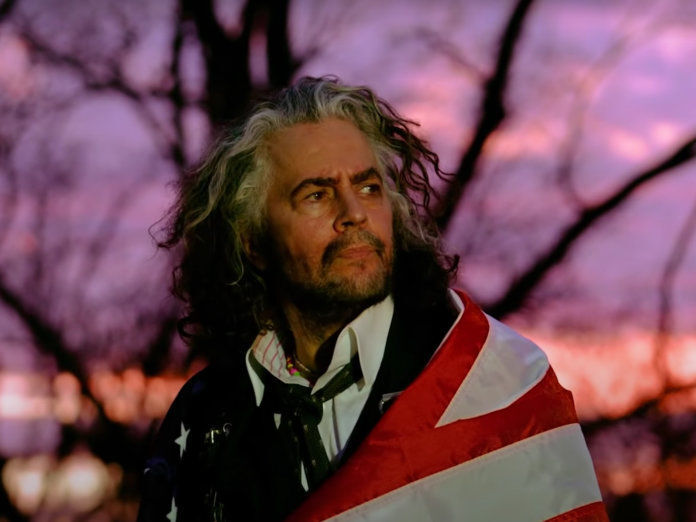 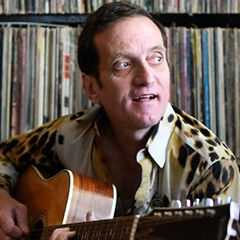 Nacho Kart’s Garrett Glass got 2020 off with a windmill with his bandmates as they blasted into the new year with a power packed Pantera showcase.

The “Real” MVP Rodney Whaley, right, jams with Sarah Wright and Kerry Hartman during a pre-Park Stomp jam for the column’s radio show. In his first year as event coordinator, Whaley pulled off magic to keep the music flowing through Medicine Park in 2020.

In hosting the online video series “To Minutes to Late Night,” Gwarsenio Hall has helped usher in some of the most fun and inventive music circulating in media, especially in this time where live music is found virtually.

It’s a new year and I know many of you are wishing to remember 2020 as something that didn’t happen. Well, it did.

But now it’s 2021 and before moving on, it’s a good time to remember some more Highlights of 2020 from the world of music, including in Southwest Oklahoma.

If anything was a kick in the pants for live music fans in 2020, it would be the heavy hiatus to one of the finest parts of life — attending live shows featuring your favorite musicians.

It started off so strong, too.

Transitioning from eve and into the new year, Nacho Kart Does Pantera offered a local supergroup tackling the sacred music of the local heavy metal community. And they did it with style. The lineup: Garrett Glass, vocals; Dakota Hooper, guitar; Francis Balliet, bass; and David Dodson, drums; channelled their heavy metal heroes to put on a headlining concert’s worth of power metal from the godfathers of the genre. Check out this partial twofer with ”Walk/Regular People” — https://youtu.be/pbKs8037CNo.

They even broke character by closing the night with the AC/DC classic, ”TNT” — https://youtu.be/ysiOSVl31Sc.

Remember, all the links posted in the column will take you directly to the song when you visit the online edition.

Things kept looking up when the wife and I received tickets to the Dweezil Zappa “Hot Rats Live! + Other Hot Stuff 1969” concert at Oklahoma City’s Tower Theatre in early-March. I missed out on the opportunity to catch the late-Frank Zappa in concert and wasn’t going to miss this one. It was one of the most amazing live performances I’ve seen with its mix of master musicianship and humor. Catch at little taste of ”I Have Been In You/Broken Hearts are for ...” — https://youtu.be/qVkOopmfF0o.

The deck was stacked and ready. Big time live shows were lined up for coverage, including Okilly Dokilly, Om, Black Flag at Lawton’s Railhead Saloon, The Mountain Goats, The Growlers, The Black Keys with Gary Clark Jr. and ... I stopped keeping track after that. Best laid plans. All I can do is link the Mountain Goats song that seems like it was written for 2020, ”This Year” — https://youtu.be/ii6kJaGiRaI.

It was all slated to start locally in Medicine Park with Park Stomp. And then, on March 14, 2020, the pandemic claimed its first festival, along with shuttering smaller stages for local live musicians. By summer, some would reopen but others remain closed even now. Medicine Park’s Roots Ball would be the next casualty. But the festival season returned in July with Rock In The Park and the iconic Blues Ball closed out summer. Park Stomp even made its return in October with many of the original lineup on the bill.

You’ve got to give it up to Rodney Whaley in his first year as events director. He was able to pull things together under some adverse circumstances, along with the help of a faithful many, as he’ll assure you. He earned the title as the ”Real” MVP award all his own for this one.

I wanted to thank the large number of the Southwest Oklahoma talents who didn’t let the lack of stages during the sequestration keep them from doing what they do: make music. And they joined this column and the column’s late-radio show in sharing it virtually by being part of #VirtualSoundemoniumFest. Its goal was to keep live music’s blood pumping via Facebook or other media streams and shared virtually. It was hoped that viewers to these events would maybe contribute to the performers who were asked to remember their favored venues and other local businesses hurt during the pandemic shutdown. It’s about community and creativity combining. Civility during a crisis, if you will.

One of the first to share this vision was Brandynn Dammit. Over the two months that followed, his band Drop Dead Dammit performed three terrific sets. Their take on Mark Lanegan’s ”Phantasmagoria Blues” is definitely 2020s ”Best Cover” in my book. It was fitting they closed #VirtualSoundemoniumFest to raise money for Shine On Tattoo. I can’t thank enough every local musician who pushed through to keep live Southwest Oklahoma made music breathing here in Southwest Oklahoma. Y’all rock!

I want to give it up to all the big ways performers have pushed through. Being stuck in the home studio instead of bigger stages could really call for some bad rock star occasions of acting out. But leave it to artists to find a way to be creative while taking advantage of the latest technology.

I’ve written about this following series in the Songs for the Sequestration section that’s sprouted over the past 10 months. It’s really taken the freedom to make content and connect with people to grab my attention.

Of course, a sense of humor is a pretty great. And when combined with some fantastic musicianship, you’ve got a winner. At least that’s the case for Gwarsenio Hall and Mutoid Man and the recurring YouTube series, ”Two Minutes to Late Night.” Hands down my choice for ”Best Music Thing on the Internet.” There are so many cool videos to check out.

Taking cues from the self-quarantining going on, collaborations between a wide range of musicians have yielded some amazing results. And they always come with a smile Check out one of the unique collaborations featuring Marty Friedman, Hall, and members of Mastodon, Lucifer and Baroness to rework Fleetwood Mac’s ”You Make Loving Fun” into something else and yet the same — https://youtu.be/zwXt8zdC1cI.

This was a sort of highlight year for me in some respects. It was cool to have the opportunity to interview two Oklahoma musicians who inspired me a long time ago to get up onto those Oklahoma City-area and, later, local area stages and know it’s okay to in that moment feel like a “rock star” in this state.

The opportunity to reveal the story of Tyson Meade over three columns was something that couldn’t possibly be afforded other than when live music went quiet for a while. His is a detailed tale to tell. It’s appreciated those who indulged in his story that traveled from the 1980s in Defenestration and was followed by The Chainsaw Kittens, one of those 1990s bands that should have been bigger. From Norman, they performed with Jane’s Addiction and Iggy Pop and many more before the band’s disintegration.

Meade’s journeys through life and that led him overseas are best shared, recorded, read and remembered. For him, it led back home to Oklahoma City, the music he loves and success as an artist. He’s a one of a kind.

Another cosmic singularity is Flaming Lips mastermind/frontman Wayne Coyne. He also happens to live across the street from Meade.

It had been about a year since a prior interview where Coyne discussed the motivations and inspirations for what would become “American Head.” From their earliest days as a gritty and barely capable but highly enthusiastic band performing in Oklahoma City in the 1980s and 90s, they are a sonic sensation. I call it the tenacity of never giving up. And in this case, Coyne’s enthusiastic creativity married with the metaphysical musicianship of Eisenhower High School graduate Steven Drozd, his musical partner.

You guys know I’m a fan of the band but, as a discerning fan, ”American Head” is my ”Album of Hope into 2021.” This collection carries the band’s ever-present embodiment of hope and sonically imbues a great feeling of being alive and hopeful: ”Will You Return?/When You Come Down” — https://youtu.be/DgWaChX1cno.

I know this past year’s been a wild one but remember, it’s going to be okay. What’s the worst that can happen?

Although the ”Today’s Best Soundemonium!” radio show ended in 2020, our social media presence remains eternal so you can keep up with what’s happening and what’s next.