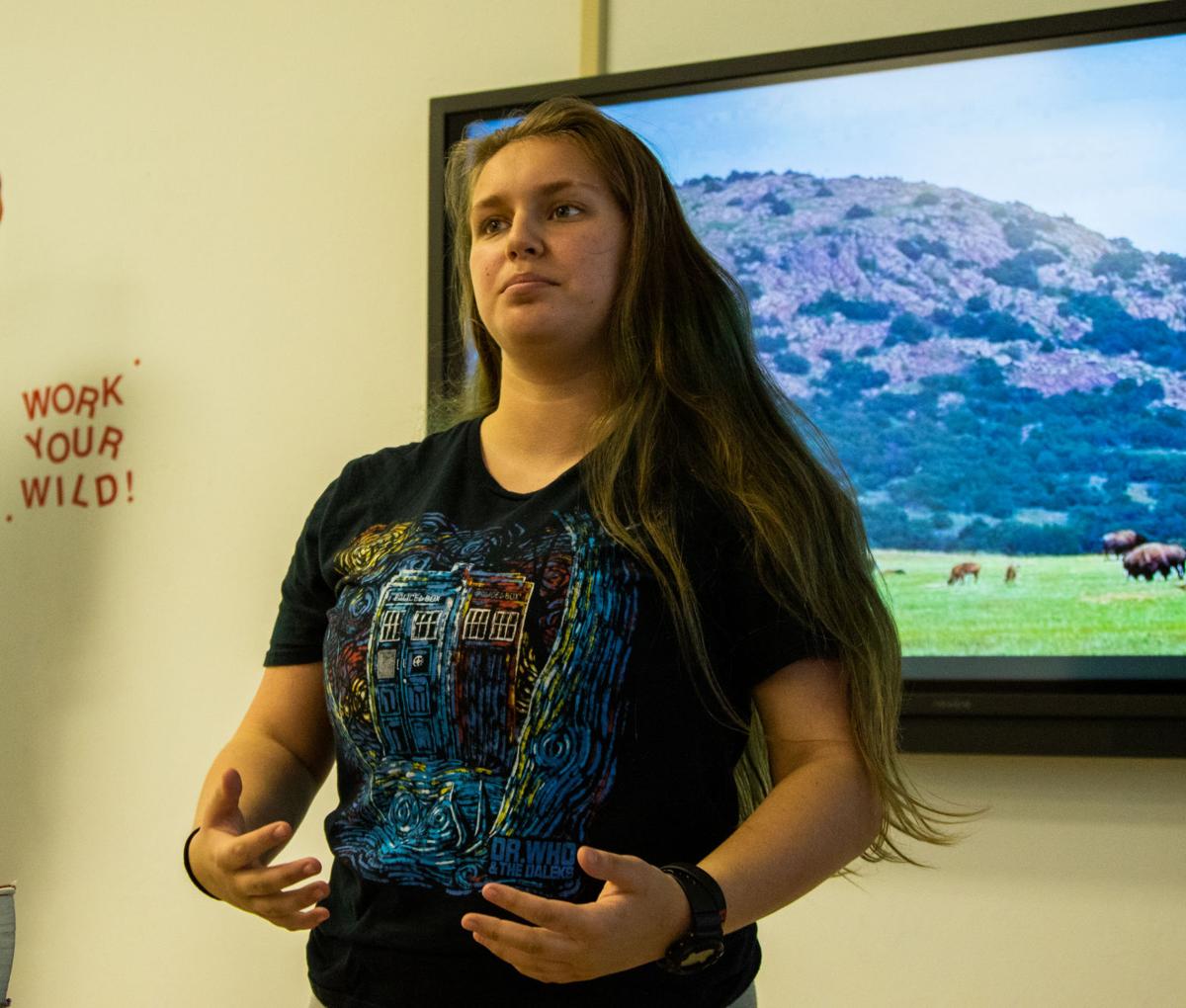 Adylynn Anderson recites the poem “Diameter” by Michelle Y. Burk. Anderson placed first runner-up in a state poetry reading competition — earning $100 for herself and $200 for her school library.

Adylynn Anderson recites the poem “Diameter” by Michelle Y. Burk. Anderson placed first runner-up in a state poetry reading competition — earning $100 for herself and $200 for her school library.

For the competition, Anderson had to memorize three poems and read them aloud in videos that were then submitted to judges. She chose “We Are Not Responsible” by Harryette Mullen; “Diameter” by Michelle Y. Burke; and “In School-days” by John Greenleaf Whittier. Of the three poems, Anderson said “Diameter” was her personal favorite and held the most meaning to her.

“I liked all of them for different reasons, but I really liked that ‘Diameter’ a lot,” the high school freshman said. “That one was probably most special to me. It just had more emotion, in my opinion, or a deeper emotion. They were all very emotional but that one was the most emotional.”

The poem is about a woman trying to help her friend deal with the grief of losing a close friend, Anderson said.

Anderson’s AP English teacher, Terry Freeman, was extremely proud of his student and while he jokes about denying he ever said it, he believes Anderson should have won the state title.

“You are looking at next year’s state champion,” Freeman said. “That’s why I like this one so much. This is one girl with some gifts and she’s only a freshman.”

Anderson hopes her gift for public speaking leads her into a career in law. She said she plans to earn a master’s degree in business and then attend law school.

Studying and learning Latin helped lead her in the direction of public speaking and poetry reading, Anderson said. She also was encouraged by her English teacher who suggested she go see Freeman after Anderson read a poem aloud in class.

For her second place win, Anderson took home $100 for herself and $200 for her school library.

Watters memorized and recited “Invictus” by William Ernest; “A Song in the Front Yard” by Gwendolyn Brooks; and for the finals she used “Carousel” by Jay Savage.

“Sunny dedicated herself to countless hours in preparation for the state contest,” said Jessica Spence, high school English teacher and Poetry Out Loud coordinator. “She had to preform in front of her peers in multiple class hours to prepare and she practiced in front of her teachers and administrators. She has learned to overcome obstacles and fears through practice, hard work, and dedication that has undoubtedly pushed her to the top for this contest.”

As a senior, this will be Watters’ final year in the competition. She plans to attend Cameron University next fall and major in early childhood education.

Anderson and Watters competed against schools across the state with Stephanie Thanscheidt of Bethany High School earning the state title.

The competition, presented in partnership with the National Endowment for the Arts (NEA) and the Poetry Foundation, is part of a national program that encourages high school students to learn about great poetry through memorization, performance and competition.