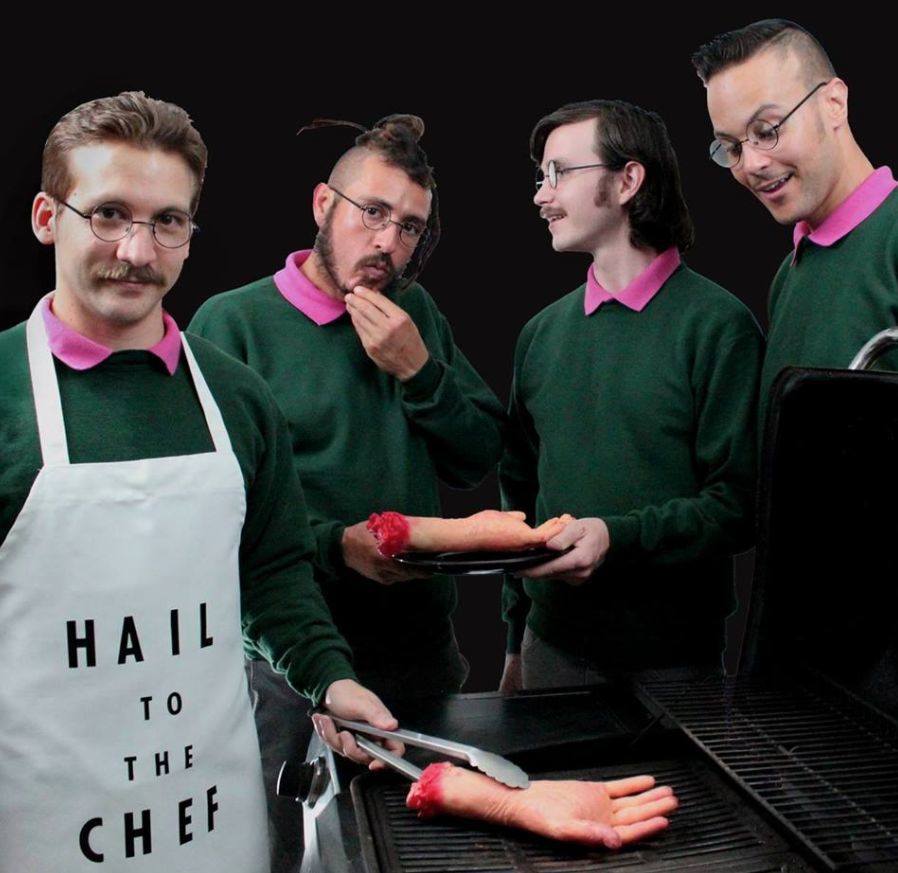 The “heavy Nedal” band Okilly Dokilly are coming to Oklahoma City in May. Head Ned (apron) took time to speak with the columnist. 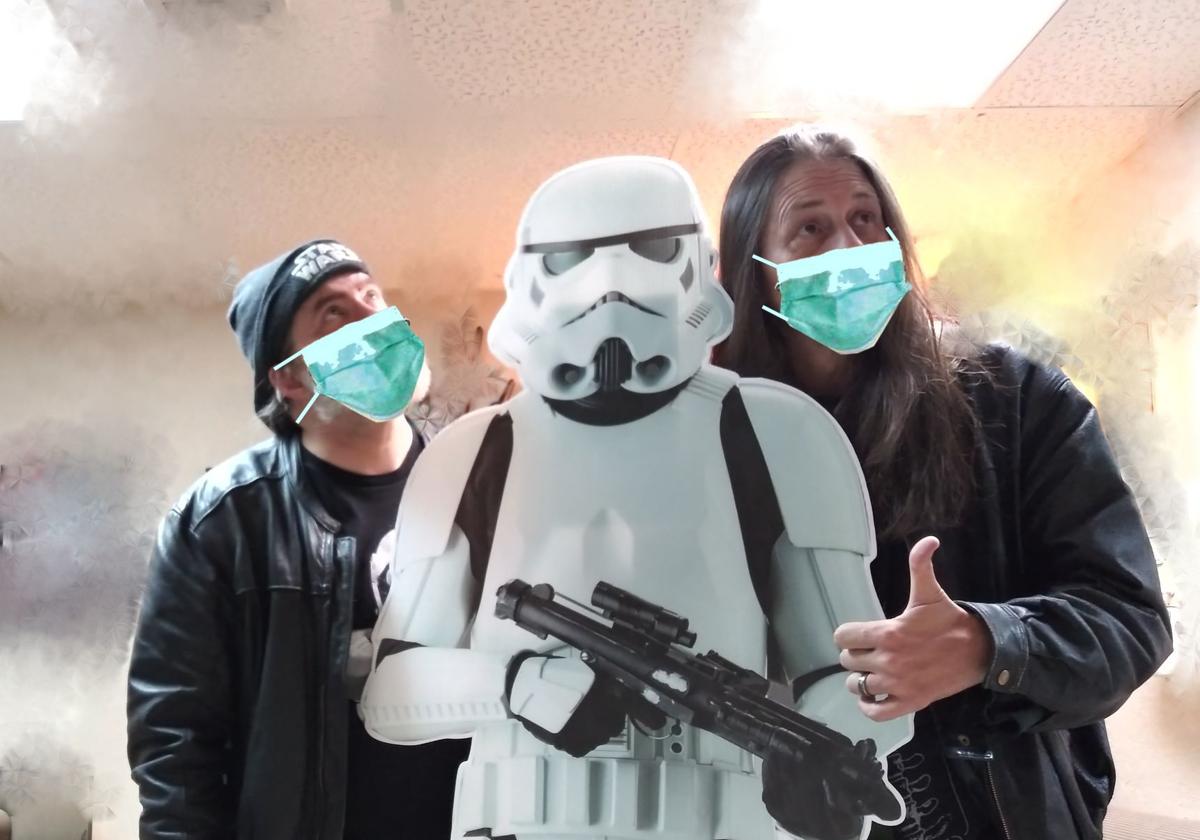 No virus is going to keep Steve Carr, a.k.a. Steve-O, left, the unknown stormtrooper and the columnist from delivering this week’s edition of Today’s Best Soundemonium!

The “heavy Nedal” band Okilly Dokilly are coming to Oklahoma City in May. Head Ned (apron) took time to speak with the columnist.

No virus is going to keep Steve Carr, a.k.a. Steve-O, left, the unknown stormtrooper and the columnist from delivering this week’s edition of Today’s Best Soundemonium!

Head Ned, singer for the band Okilly Dokilly, took a minute away from working on his taxes to say “hidilly ho, neighborino” to the columnist last week about the Simpsons-flavored band’s upcoming tour that will bring them to Oklahoma City’s 89th Street, 8911 N. Western, for a May 7 concert.

A five-piece heavy metal outfit, or “heavy Nedal” if you will, these guys are doing something fun, unique and solid as a left-handed rock. The band began in 2015 as more of a lark for the Phoenix, Ariz., group.

“The idea was to make it very, very fun,” he said. “It was supposed to be a goofy project, maybe one or two little shows at a bar and then the internet took it and spread it around. It’s been kind of fun to see so many people get into it.”

The band’s recent tours overseas surprised the Head Ned. He didn’t know just how far The Simpsons has impacted culturally until showing up in European venues and seeing a few random Homers in the audience and receiving feedback from the audience. “It’s cool to spread ‘heavy Nedal around the world,” he said.

The band’s first album was based on Ned Flanders phrases and lines they already knew. Head Ned said for the second one, he sat down with the first 10 seasons of the seminal show and borrowed enough dialogue and themes to write 20 songs; 11 made the cut on the album. He figures he has a process for future writing.

Head Ned doesn’t come from a heavy metal background. He began playing music in 2009. When the Okilly Dokilly notion came about, he said it was an opportunity to experiment and write songs in a different genre.

The band has played in Oklahoma City a few times before and Head Ned said the 89th Street venue has been a good one to the group. They were to join Mac Sabbath at the Tower Theater last year but, he said, “Ned Vanders broke down and blew its Flan’smission.” He’s ready to return.

“I was pretty bummed,” he said. “We’re excited to make our redemption show in Oklahoma City.”

Surprisingly, Head Ned said the band hadn’t ever heard from anyone connected with the show until last year. Worried they were receiving a cease and desist letter, instead, the band was asked for permission to use the video for their song “White Wine Spritzer” for the ending of an April 2019 episode — https://youtu.be/2BEvh6HSQc0.

“That was way more than we ever expected to go with the band,” he said. “That was really cool to have that happen and not be a lawsuit.”

Once he’s done with his taxes and the tour, Head Ned already has plans ready: he’s going to watch seasons 11-20. With over 30 seasons, the material has a long life.

Open Mic Night with Big Pete Piehnik at Red Dirt Reloaded, 6425 Cache Road, offered a ton of great entertainment last week. Of course the big blues man got things rolling with his one-of-a-kind voice and strumming to set a tone to continue for hours.

It was good to catch Amanda Kidd back behind a microphone and testing out new and trusted songs from her catalog. Bret and Daphne Pollan also did a bang up job with their time on stage.

Jared Rosin and Zach Holliday knocked out a top notch set from the stage. While they’re working slowly towards getting their first album together, here’s a taste: •Jared Rosin & The Shuffle — “I’ll Blow Up Your Car” — https://youtu.be/Nlx7F7CE1zY.

Of course Dave Smith and Ray Bordelon shone in their time in the spotlight with Ray Miller in the audience playing the shaker to give a full-bodied experience.

The inimitable Bannister Chaava returned to where he first started gaining some local steam. He’s working on a new album due in weeks and, man, is he something special.

The open mics are from 7 to 10 p.m. the first and third Thursday each month. If you like to entertain or be entertained by top talent, it’s the place to be.

This week, Studio Blanket/Tent Fort for Today’s Best Soundemonium! with Steve Carr, a.k.a. Steve-O, and the columnist made a great proving ground for the Spring 2020 Episode No. 169 “Heh, Heh, Heh” Mix Tape. I’m so grateful to all the fantastics artists whose work made it happen: Big Pete Piehnik, “Lucy In The Sky With Diamonds”; Rodney Whaley, “I’ll Never Touch You Again”; Mike Narcomey/Astraea Invade, “Peace & Warmth”; Crossed Hearts, “Tell Me How It Really Is”; Josh “Stash” Hileman/Stash Project, “Already Gone”; Dani Carson, “Jolene”; and Rick Fowble/Redgrass String Band, “Dang Girl.”