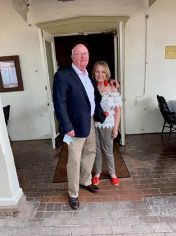 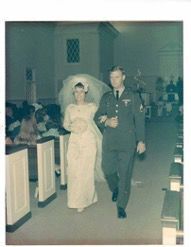 William “Bill” Murray Stoneman Jr. and Mary Frances McDuffie Stoneman will celebrate their 50th anniversary on Sept. 20 by enjoying an evening of family and friends in Elgin.

They were married on Sept. 20 1970, at Campground Methodist Church in Fayetteville, N.C.

Bill served as field artilleryman and military intelligence officer over the 20 years of service where he saw service as a Non-Commissioned Officer (Sergeant First Class) and Commissioned Officer (Major). He has served in numerous command/staff/instructor positions. He attended a number of military schools and was awarded a number of awards and decorations. Upon retirement Bill finished his degree at Cameron University and substitute taught in the Lawton School system, then went to work for LB&M Associates, then TELOS, and finally Techmasters, where he still works a few months out of each year.

Mary left ECU to join Bill at Fort Sill when he was attending the Field Artillery Officer Candidate School (OCS). During a tour at Fort Benning she finished up her bachelor’s and master’s degree at Columbus State College and has been a licensed speech and language pathologist (SLP) since 1983. Mary worked in the Columbus Georgia School System as a SLP until Bill received orders for Fort Sill again. Upon arrival in Lawton, Mary again settled in as a SLP with Lawton Public Schools (LPS) where she was selected as the LPS Teacher of the Year for 1989. She also enjoyed a short stint at Comanche County Memorial Hospital as a SLP before she returned to her love — little kids in a school setting. Upon her retirement from LPS, Mary had a short stint as a SLP with the Elgin School System. Then she found Gore Therapy and private practice with kids again. Finally, she was able to work with not just kids but their parents as well. She now enjoys her time with kids, grand kids, great-grand kids, dogs and crocheting with a group of ladies in Elgin.