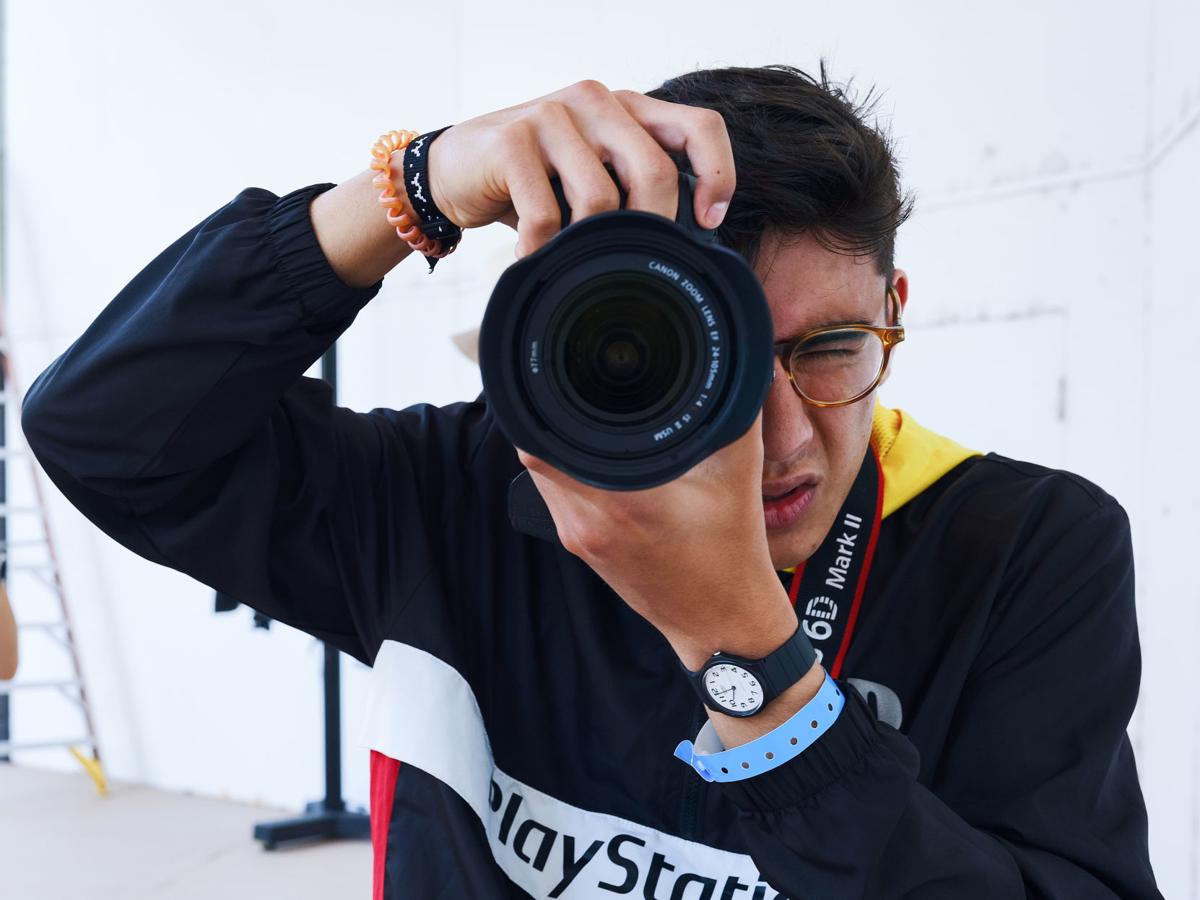 Andrew Celedon, who attended the Oklahoma Summer Arts Institute for photography in 2019 and was accepted again for the 2020 program, practices his shooting technique during class. 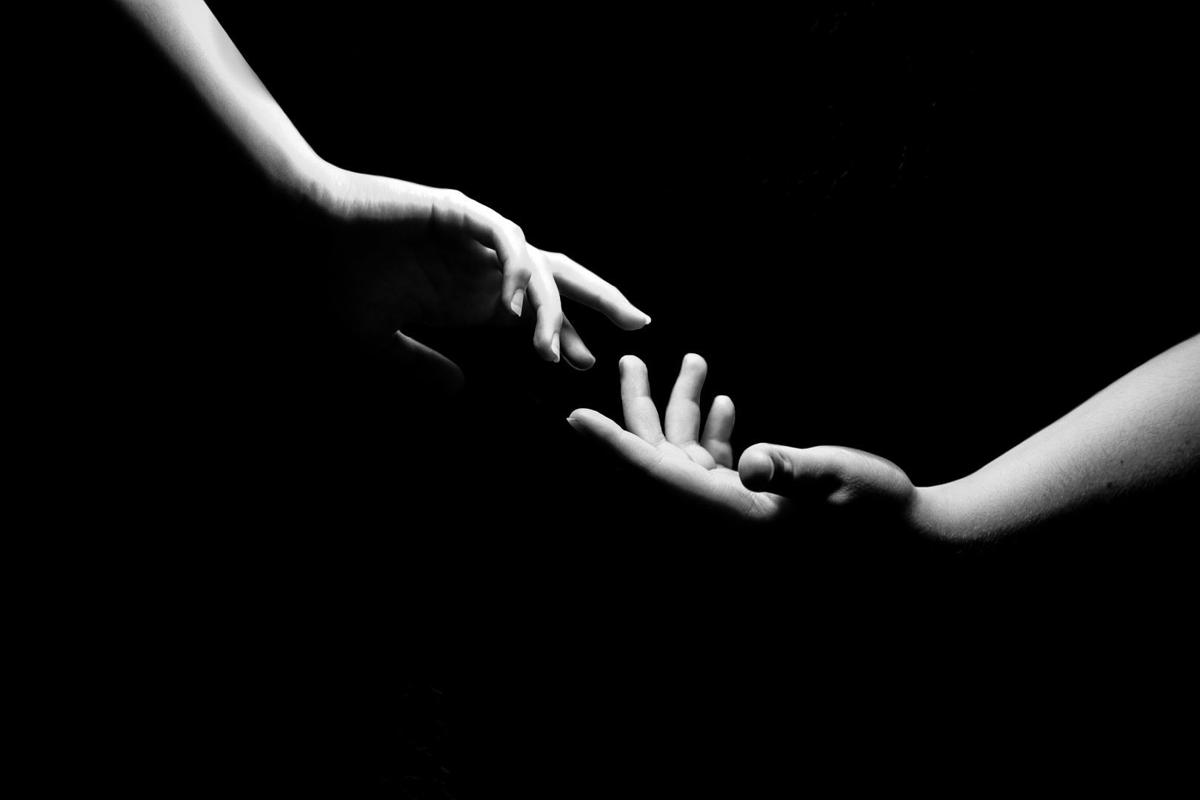 A portrait that Andrew Celedon made of one of his classmates, Bailey Rigby. The focus of the 2019 photography program at the Oklahoma Summer Arts Institute was portraiture, and the students spent the entire two weeks photographing the same classmate. 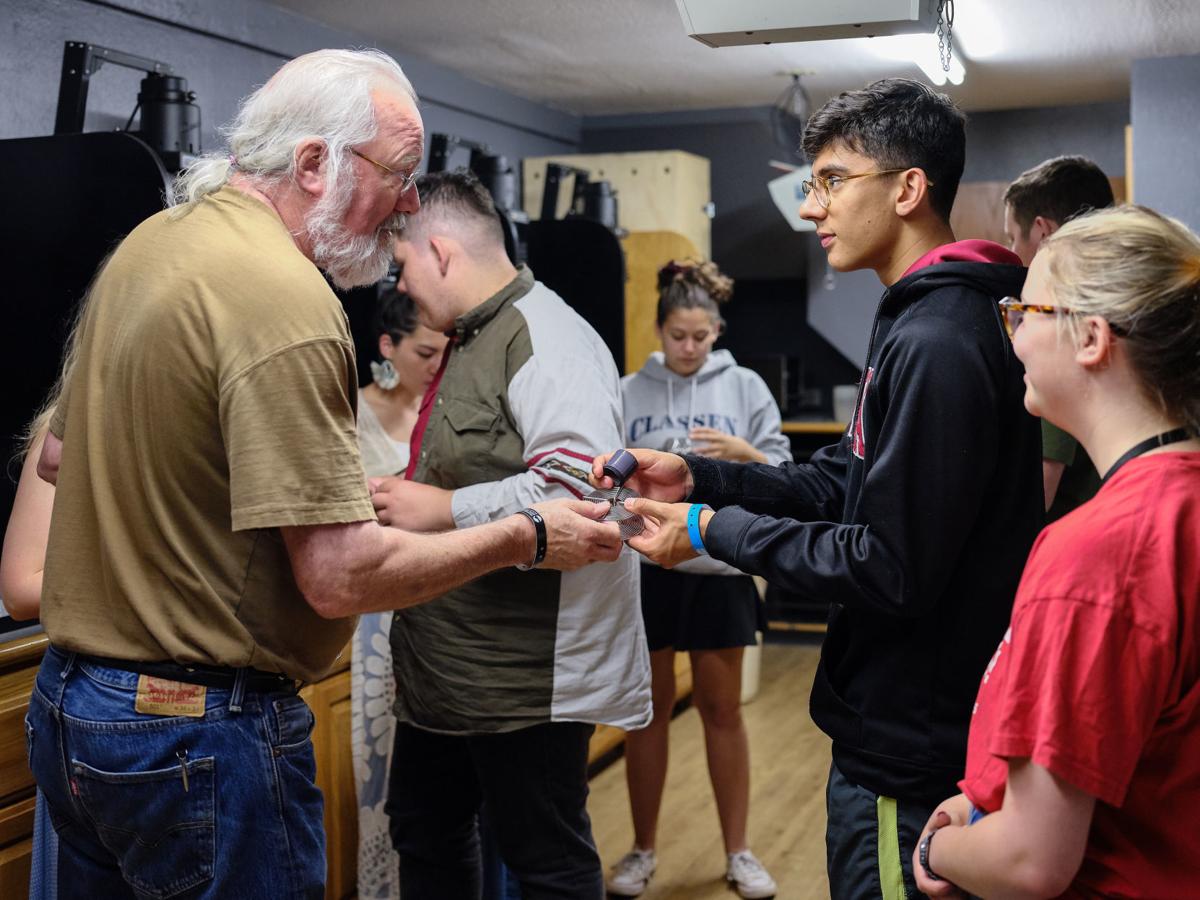 Konrad Eek, the darkroom instructor for the Oklahoma Summer Arts Institute photography program, teaches Andrew Celedon how to load B&W film onto a steel spool in order to develop it.

Andrew Celedon, who attended the Oklahoma Summer Arts Institute for photography in 2019 and was accepted again for the 2020 program, practices his shooting technique during class.

A portrait that Andrew Celedon made of one of his classmates, Bailey Rigby. The focus of the 2019 photography program at the Oklahoma Summer Arts Institute was portraiture, and the students spent the entire two weeks photographing the same classmate.

Konrad Eek, the darkroom instructor for the Oklahoma Summer Arts Institute photography program, teaches Andrew Celedon how to load B&W film onto a steel spool in order to develop it.

In the stillness after the camera shutter has closed there is a moment, a brief fraction of a second, during which the photographer’s subject exists in flux. Will the image be out of focus or crisp and clean? Until the shutter is released and the image is developed, there is no way of knowing.

As COVID-19 spread throughout the country in March, Julie Cohen, president and CEO of the Oklahoma Arts Institute, held the shutter closed on the prestigious institute’s summer program, hoping against odds that when it opened the picture would reveal a thriving camp unaffected by the pandemic.

But the picture that finally developed was out of focus. So with reluctance and heavy hearts Cohen and the institute’s board of directors came to the conclusion that the summer institute would look different this year.

“While we know this is the best decision for the health and safety of our OAI family, we are grieving right alongside our students, faculty and summer staff,” Cohen said.

But all hope was not lost. In the wake of the decision a new vision formed, one that would radically reshape the institute’s annual summer camp. The camp is moving online in an event called “OSAI at Home.”

“Our students have worked so hard to qualify for this opportunity, and we are determined to honor their exceptional achievement by allowing them to study at a level that is not available to them at home,” Cohen said. “Though the Institute will take place online, students will still study with extraordinary faculty, receive individualized feedback in their artistic discipline, network with other high school artists, and further their creative talents.”

The institute is developing a plan to recreate as much of the experience as possible in an online environment. A virtual learning questionnaire was drafted and sent to students and their answers are being used to guide staff in the decision-making process.

“It’s incredibly challenging to move this online,” Cohen said. “It isn’t going to be the same as the in-person institute. That said, we think we can reproduce a lot of the important things, which are access to faculty artists, one-on-one mentoring and building a community and network of young artists who support each other and share aspirations.”

There is a silver lining hiding amid the gloom. Moving online allows the institute to bring in lecturers and guest artists they had never been able to afford before.

“Sometimes it is hard to recruit a faculty member for travel to Quartz Mountain,” Cohen said, citing travel and financial restraints. “Every evening we will bring in incredible guests for lectures, performances and demonstrations.”

Cohen couldn’t comment on the big names lined up for “OSAI at Home,” but she did say the institute is reaching out to performers and artists it had never dreamed of reaching before.

“I will say this, these will be some of the most interesting people we have ever had,” Cohen said.

In order to ensure “the best attendance possible,” the duration of the summer camp was reduced from a two-week format to a five-day format. Students will be working with their classes online through Zoom and other programs. Students will work with faculty artists multiple times a day.

Normally, former students of the institute would return each summer to serve as counselors. Counselors are still being hired for OSAI at Home, but their role this year will be a little different.

“Our counselors will work as liaisons in the classrooms and their role will be helping the faculty make sure communications are going well and everyone is staying engaged. They will also be helping to create a community for the students to get to know each other,” Cohen said.

Among that student community is Andrew Celedon. This would have been his second year to travel to Quartz Mountain to participate in the summer institute as a photography student. The senior from MacArthur High School was taking a concurrent photojournalism course at Cameron University when he discovered his love of photography.

“My professor, Dr. Zhao, was amazing. She really made me think outside the box,” Celedon said.

After his mother showed him an article about OSAI, Celedon became curious about the institute. His time studying under Zhao at Cameron gave him the confidence he needed to submit his application to OSAI.

When he received his acceptance letter, he was ecstatic. Having never been to the institute before, he wasn’t entirely sure what to expect. When he arrived, he was blown away.

“It was such a surreal experience. It was two weeks of pure artistic creativity and development,” Celedon said. “It was one of the most formative summers of my life.”

Over those two weeks in the summer of 2019, Celedon met dozens of other like-minded student artists from several disciplines and made friendships that still persist.

“We have a little Instagram and Snapchat group going where we keep in touch. My photography partner told me that a photo she took of me was used in the Tulsa World Magazine. Sometimes I’ll go up to Oklahoma City and we will meet up and do a shoot,” Celedon said.

Celedon will graduate from MacArthur in May. Unfortunately, that means he will not be able to reapply to OSAI next year. This summer marks his last time attending the institute.

“I was devastated when I found out we couldn’t attend in person,” Celedon said. “But they have been so willing to work with the students and I really appreciate their efforts to move it online. They could have just canceled the whole thing from the get-go. But they believe in us. And I’m really grateful that I get to do the online portion and still get the instruction that I need.”

While he is undecided on which college he will attend, Celedon believes that his time with OSAI has instilled in him a work ethic that will be a boon to his college studies.

“All of the work you produce and all of the projects you work on set you up for a college experience,” Celedon said. “Those habits of self-motivation I know are going to help me when it comes to college.”

Celedon is looking forward to OSAI at Home, even if it is a nontraditional experience. After all, everything about his senior year has been unorthodox so far.

“I’m trying to hang in there. It’s a day-by-day battle. Every day it seems like you find out something else was canceled or something was moved online. But I’m trying to keep a positive attitude,” Celedon said. “You have to play the cards you’re dealt. I’m holding on. I hope all of my senior counterparts are as well.”

Until the storm clears Celedon will hold fast, and even if he doesn’t pursue photography in a professional capacity his studies will continue. And though the future is out of focus right now, viewing the world through the lens of his experiences at OSAI has given Celedon a new outlook on life.