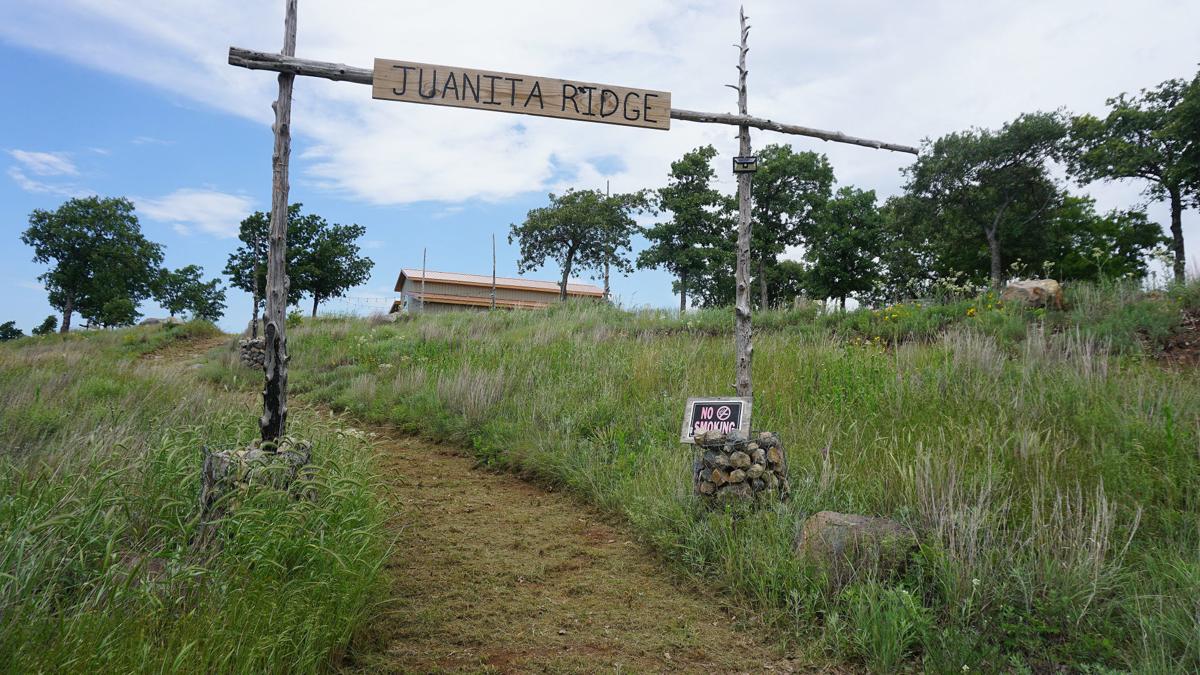 The path that Shahan and his mother took each morning to look out over the valley now leads up to Juanita Ridge, a venue now dedicated to his mother.

Shahan shows off the view from Juanita Ridge into the valley where Camp Y’Shua now stands. 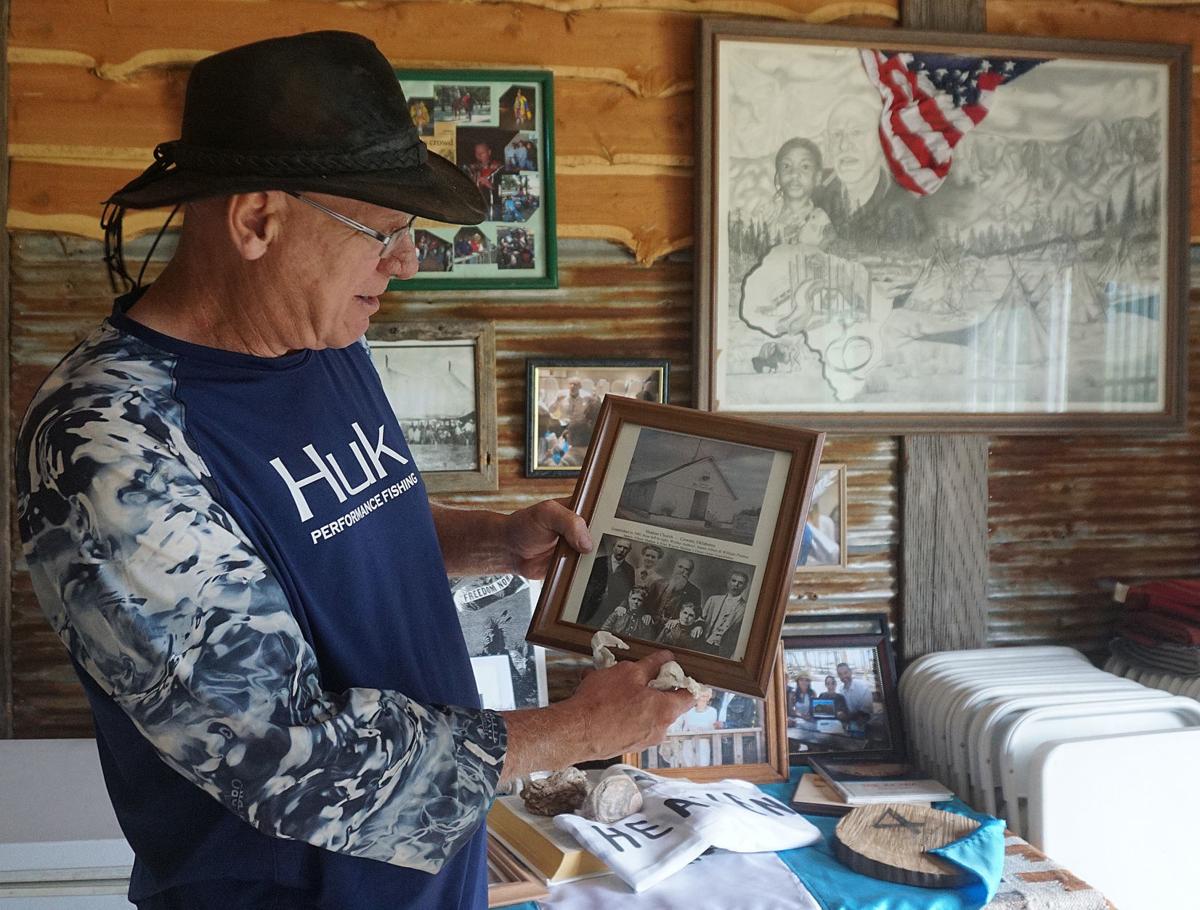 Inside the visitor’s center on Juanita’s Ridge, Shahan shows off some of the items he has setup as a shrine that tells of his mother’s legacy. 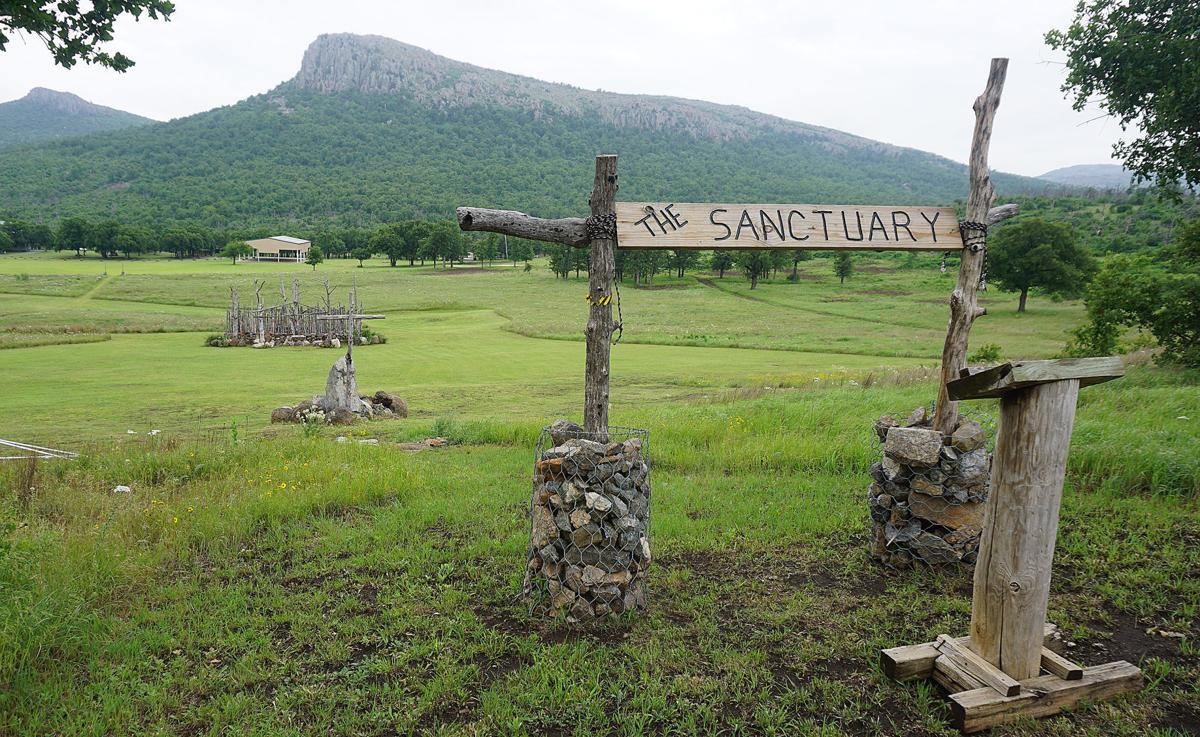 From the crest of the ridge visitors can step beneath the symbolic sanctuary sign that leads down into the valley.

The path that Shahan and his mother took each morning to look out over the valley now leads up to Juanita Ridge, a venue now dedicated to his mother.

Shahan shows off the view from Juanita Ridge into the valley where Camp Y’Shua now stands.

Inside the visitor’s center on Juanita’s Ridge, Shahan shows off some of the items he has setup as a shrine that tells of his mother’s legacy.

From the crest of the ridge visitors can step beneath the symbolic sanctuary sign that leads down into the valley.

On the northwest side of the Wichita Mountains, painted in verdant green and orchestrated with birdsong, is a sanctuary.

To the Kiowa nation it was known as the “Valley of a Thousand TeePees,” a land that protected the nomadic tribe during the winters. The mountain ridge that bolsters the valley is the simulacrum of a woman lying across the land, one knee propped to the sky. The Kiowa called her “The Sleeping Lady of the Wichita’s,” and she protected the valley.

In 2004, a group of Kiowa elders came to the valley, which is now home to Camp Y’Shua, an annual summer youth ministry camp. The elders met with Kim Wayne Shahan who owns the land and runs the camp. The elders told Shahan the story of the sleeping lady.

Standing on a ridge overlooking the valley, Shahan recalled his meeting with the elders, and the moment that altered his vision for the camp.

“Then this older Kiowa elder gets up off of his chair and he says ‘Kim, look at her, she’s pregnant and she’s given birth to a vision.’ That old man took me, he grabbed me by my hands and started praying around me in the Kiowa language,” Shahan said. “People ask me, they say, ‘Kim, why are you so passionate about these things? I mean dear Lord, multiple generations of people that have come to this land are telling me ‘you are valued by us, what you do is valued.’”

To understand Shahan’s present, one needs only take a look at his past. In the 1980s, his parents purchased 12 acres in the valley with the dream of eventually building a home in the quiet stillness of the wilderness. Shahan, who graduated from OSU in 1981, had gone to South America to minister. When he returned, he told his mother, Barbara Juanita White Shahan, that he had a dream.

“It was called ‘Athletes of Good news,’ because I was an athlete and I thought I had some good news,” Shahan said. “It was very simple in my mind.”

Shahan, who had received a full-ride basketball scholarship throughout his time in college, described to his mother his dream of creating a sanctuary for youths to come and live a prayerful life. That was when his mother offered up her own dream to help her son achieve his.

“She gave me that 12 acres and the money she had saved for me to go to college,” Shahan said, tears he had not expected welling up in his eyes. “If my mother wouldn’t have given up on her dream of a home here to get me started, this never would have happened.”

His mother passed away in 2011. By then, the camp had grown to 160 acres. Before she passed, Shahan and his mother would climb the same ridge he was standing on. There, the two of them would sit on a rock and look at across the valley in the shadow of the sleeping lady.

“My mom and me, we talked about this place. I said, if there is anything we can do it’s bring people here to experience whatever it is that is here,” Shahan said.

And there is something there, Shahan believes, even if it isn’t something he can put into words. Standing on that ridge in the shadow of the mountains, the beauty and wonder of nature spilling out before you like an amphitheater where nature is the stage and birds, squirrels and deer the actors upon it, is a spiritual experience for him.

“When her Alzheimer’s came on and she came up here it was like she’d go away, got to place she’d be in and out of. She’d forget it, but she’d keep reliving it here,” Shahan said.

For the last nine years, Shahan has been working hard to honor his promise to his mother, and on May 26, what would have been his mother’s 86th birthday, he officially christened that ridge as “Juanita Ridge.”

Juanita Ridge will serve as a visitor’s center, seating for events and a venue for fundraising among many other potential uses. In a small gathering of 30 students from this year’s camp, Shahan dedicated the ridge in memory of his mother. It was the first of what he hopes will be many celebrations there.

“One of the dreams I have is to bring organizations out here to help raise money for Alzheimer’s,” Shahan said.

As Shahan stood next to the rock that he and his mother had spent so much time on during her final days, he looked out at his vision, the one the sleeping lady had birthed. In the distance he pointed out a white dove against the Oklahoma skyline. Maybe it was a dove, maybe it was a crane. But in that place, it could have been anything he wanted, and that was what mattered to him the most.