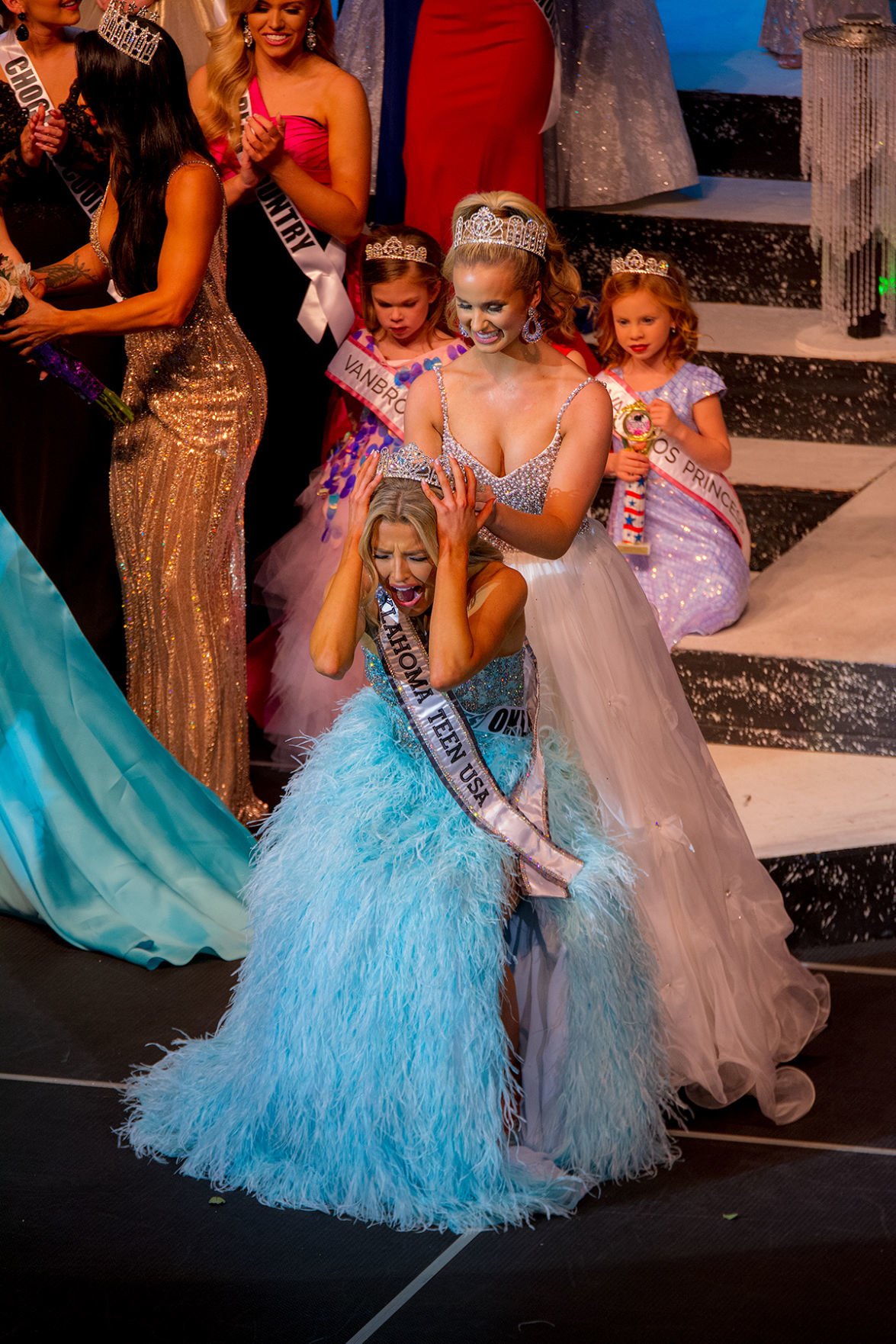 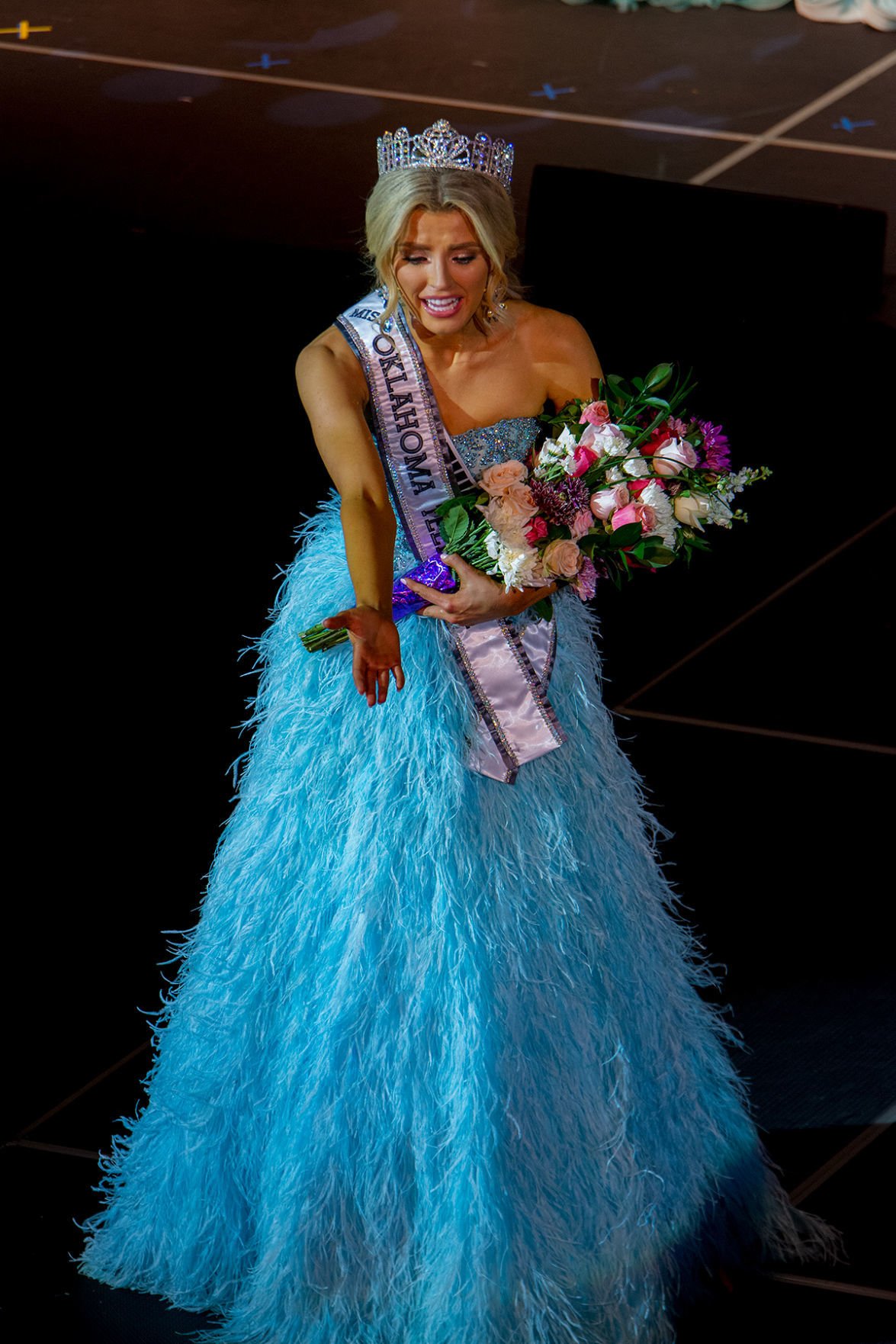 Danika motions to the crowd where her mother, Amy Christopherson, was seated alongside the rest of her family.

Danika motions to the crowd where her mother, Amy Christopherson, was seated alongside the rest of her family.

In 2015, Danika Christopherson and her mother, Amy Christopherson, were sitting together on their couch watching Olivia Jordan accept the title of Miss USA. Jordan was a former Miss Oklahoma who was born and raised in Tulsa.

Amy remembers thinking that if someone from Oklahoma could win the pageant, then why couldn’t her own daughter. Amy described Danika as a shy, reserved girl with a big heart and a passion for helping others.

“I have always seen something special in Danika,” Amy said. “Maybe it’s because she’s my kid, but she just has a light about her.”

So Amy took a chance and signed her daughter up for the Miss Oklahoma Teen Pageant. When Danika was accepted, her mother surprised her with the news and asked her if she wanted to participate.

“I wasn’t very confident back then. She wanted me to find somewhere to grow,” Danika said.

She didn’t place. On the drive home, Amy told her daughter she didn’t ever have to do another pageant again. Danika disagreed.

In her second year, Danika made it into the top 15. In her third year, she was named first runner up. This year, Danika turned 18 and, after graduating from MacArthur High School in May, had one last opportunity to participate in the Miss Oklahoma Teen USA pageant before she aged out.

On Dec. 22, Danika once again found herself in the top five of the Miss Oklahoma Teen USA pageant. It was the last round. Each contestant was taking the stage one at a time to answer two final questions.

Backstage, she was taking deep breaths and trying to clear her head.

“We don’t know what the questions will be until we get up there. I wanted to be the last one up so I could gather my thoughts and just breathe. I really had to calm my nerves,” Danika said. “I like to say you can’t really prepare for the onstage questions. You just get up there and go with whatever comes to your mind first.”

She ended up getting her wish and was the last of the five contestants to be called on stage. Stepping out beneath the bright lights, she could see her family, with her mother leading the charge, sitting near the front.

“I cry every time she comes on stage,” Amy said. “She just has this glow when she comes out. She’s doing what she loves.”

Her first question: “what does freedom mean to you.”

Easy. Danika had just recently gotten her voter ID card in the mail. She had registered shortly after turning 18. Finally she had a chance to express her thoughts and ideas that a voter meant the world to her. It was a new kind of freedom, and she was excited to express her joy about it.

Then came the second question: “who is your biggest inspiration.”

Danika looked out into the audience, into the eyes of her mother, the woman who had set her on this path four years earlier and answered without hesitation, “my mother.”

“I tried to hold back tears at first,” Amy said, choking up as the remembered her daughter’s emotional onstage confession. “I didn’t want to make her emotional, and mess her up. It’s an honor that my daughter looks at me like that. We haven’t had the greatest life. Times have been tough. I’m just glad I could be a good role model.”

Not long after, Amy watched as her daughter stood on stage with the other finalists and waited with bated breath as the names of the winners were called. As the judges announced the new Miss Oklahoma Teen USA, she couldn’t hold back her tears any longer. Danika had won. She had achieved her dream.

“I can’t think of any other word other than grateful,” Danika said.

But the road doesn’t end there. As new newly crowned Miss Oklahoma Teen USA, Danika will have many duties to fulfill. Serving the community, speaking to others and, most of all, representing Oklahoma at the Miss Teen USA Pageant in 2020. Through it all Danika said she will continue to take inspiration from her mother.

“I know that so many other moms aren’t as supportive as my mom,” Danika said. We all have our biases, but I like to think she’s the best.”

“I am so proud of her,” Amy said, “I just hope all of Oklahoma can support her and see how wonderful she is.”