Skip to main content
You are the owner of this article.
Edit Article Add New Article
You have permission to edit this article.
Edit
Home
COVID-19 Updates
News
Almanac
Sports
Opinion
The Beat
Obituaries
Classifieds
E-Editions
Share This
1 of 4 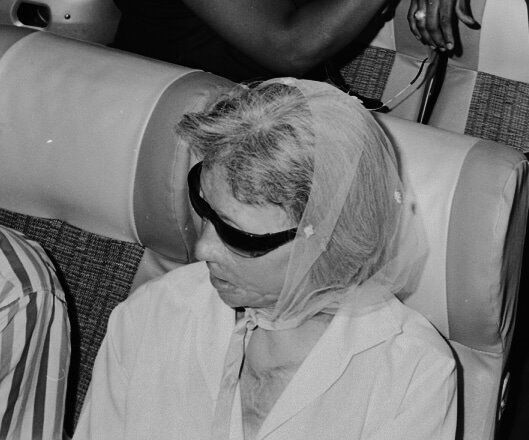 Rosie Gilchrist on a bus with an NAACP youth group from Oklahoma, traveling to the "March on Washington," where she would hear Martin Luther King, Jr. give his famous "I Have a Dream" speech.

A clipping from the Rochester Democrat and Chronicle, showing Joe Gilchrist, aka Coleman, (left) as one of eight people who broke into a federal building to destroy draft records in Rochester, NY in 1970. 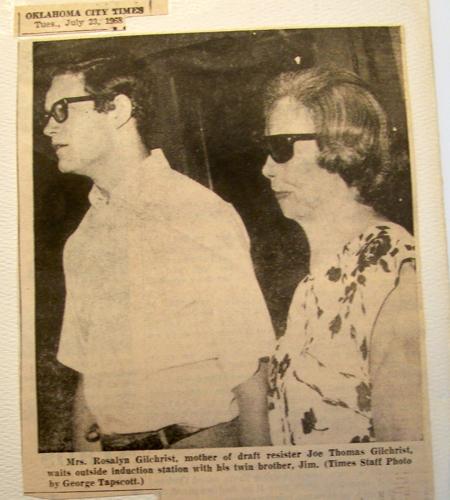 A clipping from the Oklahoma City Times showing Rosie Gilchrist and her son, Jim Gilchrist, during a trial of Joe Gilchrist, Jim's twin brother who now goes by the name "Coleman," for draft resistance. 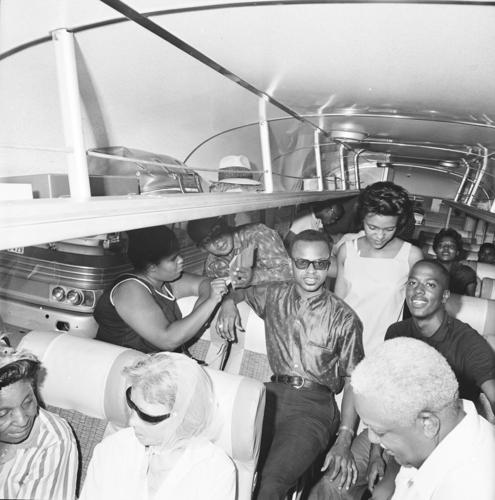 Rosie Gilchrist, front row, second from left, on a bus with an NAACP youth group from Oklahoma, traveling to the “March on Washington,” where she would hear Martin Luther King, Jr. give his famous “I Have a Dream” speech.

Rosie Gilchrist on a bus with an NAACP youth group from Oklahoma, traveling to the "March on Washington," where she would hear Martin Luther King, Jr. give his famous "I Have a Dream" speech.

A clipping from the Rochester Democrat and Chronicle, showing Joe Gilchrist, aka Coleman, (left) as one of eight people who broke into a federal building to destroy draft records in Rochester, NY in 1970.

A clipping from the Oklahoma City Times showing Rosie Gilchrist and her son, Jim Gilchrist, during a trial of Joe Gilchrist, Jim's twin brother who now goes by the name "Coleman," for draft resistance.

Rosie Gilchrist, front row, second from left, on a bus with an NAACP youth group from Oklahoma, traveling to the “March on Washington,” where she would hear Martin Luther King, Jr. give his famous “I Have a Dream” speech.

Rosie Gilchrist and her son, Joe, both spent their lives walking the hard path of resistance, and since his mother’s death, in one way or another, the man formerly known as Joe Gilchrist has been trying to find a way to tell his mother’s story.

Today, Gilchrist goes by the name Coleman. No first name. He is a published author and playwright, and a lifelong activist. In April 1964, one day after the assassination of Martin Luther King, Jr., Coleman returned his draft card to the state of Oklahoma while he was studying at Cornell University in New York, an act of resistance that would land him in jail in El Reno.

“The judge in my case said there was no possible defense I could give,” Coleman said. “He sentenced me immediately.”

Coleman was jailed in El Reno for a few weeks before being released on appeal. Another act of resistance would land him in a cell significantly longer.

In 1970, Coleman was one of eight people to go to federal prison for breaking into a federal building in Rochester, New York, and destroying draft board records. The eight anti-war activists snuck into the building at night, bringing a paper shredder in with them.

“You have to understand, this was in the early ‘70s,” Coleman said. “The paper shredder was a very large piece of equipment.”

Resistance wasn’t something that sprang up in Coleman in a vacuum. He got it from his mother.

In 1959, Rosie Gilchrist was living in the affluent Oklahoma City suburb of Warr Acres when a house fire changed her life forever. Gilchrist suffered burns over 80 percent of her body, and was brought to Baptist Hospital in Oklahoma City. She wasn’t expected to live.

Sarah Janda, a Cameron University history professor who wrote about Gilchrist for a collection of essays called “This Land Is Herland,” about notable women in Oklahoma political history, said that due to the nature of her injuries, Gilchrist was attended exclusively by black nurses.

“At that time, black nurses were assigned to care for those who were considered to be the least desirable patients,” Janda said.

Gilchrist, against all odds and thanks to experimental burn treatments being practiced at Baptist, survived her injuries, though it took years of her going in and out of treatment. Over those years, Gilchrist became a close friend to the nurses caring for her.

On her return home, Gilchrist was ostracized. She began attending the church she’d gone to regularly before the fire, only to have the pastor tell her husband not to bring her, claiming her appearance would frighten the children in attendance.

So Gilchrist found a new place to worship — the church attended by some of her nurses.

Gilchrist was accepted immediately at the new church, where it turned out the parishioners had already been praying for her recovery for some time. Through her new church, Gilchrist got involved in the civil rights movement.

Gilchrist participated in sit-in protests in Oklahoma, and became a chaperone for the National Association for the Advancement of Colored People (NAACP). Through being a chaperone, Gilchrist attended a key moment in U.S. history.

“She actually went on a bus with several student members of the NAACP to attend the march on Washington,” Coleman said. “And heard Martin Luther King’s ‘I Have a Dream’ speech.”

Gilchrist eventually divorced her husband, John, and needed to downsize significantly to live on her own. Gilchrist was dead-set on selling her home to Dr. James West, and his wife, an African American couple. Her husband, and the town of Warr Acres, wanted to make sure that didn’t happen.

In an effort spearheaded by her husband, the mayor of Warr Acres and the county sheriff opted to have Gilchrist committed to Central State Hospital. They argued that she was insane, despite there being no evidence she was not of sound mind.

Coleman, along with State Sen. E. Melvin Porter, the first black state senator in Oklahoma, and a journalist from Oklahoma City, worked to get his mother released from the hospital. Their effort worked, but it took five years.

Gilchrist died in 1971, but her influence lived on in the mind of Coleman all his life. The first time he tried to put his mother’s story into writing was in a freshman writing course at Cornell University in the late 1960s.

“We were supposed to write an autobiographical essay,” Coleman said. “So I wrote about my mother. Some of the same language from that essay appears again in my book.”

The book he mentions is “Spoke,” a memoir Coleman published about his life — and the life of his mother — in 2013.

Since publishing his memoir, Coleman has worked mostly as a playwright, having earned a degree in Theatre from Cornell. From the beginning, he’d wanted to write a play about his mother’s life, but felt the story was too complex to tell in a two-hour production. A chance meeting with Janda would eventually change his mind.

Janda first met Coleman while working on her book, “Prairie Power,” a historical account of anti-war activism in Oklahoma. She had read Coleman’s memoir and wanted to write something about his mother, a story that wouldn’t fit the theme of the book she was working on at the time.

When Janda became involved in her latest book, a collection of essays she co-edited, she got her chance to write about Gilchrist.

“Her story outraged me, and I really wanted to discuss it,” Janda said. “It touches on so many different aspects of Oklahoma history.”

Janda’s essay, clocking in at about 25 pages, set Coleman on the path toward telling his mother’s story again, this time in his favorite medium.

“She inspired me, by showing me it could be condensed with the story in tact,” Coleman said. “She wouldn’t say she had much to do with it, she’s very humble that way.”

Coleman’s play, “Oklahoma,” was finished during the COVID-19 pandemic, and has had two productions streamed over Zoom. With pandemic restrictions recently relaxed, Coleman has been shopping the play with theaters for a full performance.

He’s gotten some interest from theaters in Wisconsin, where he lives, and in Canada, but he feels the story should really have its first proper telling in Oklahoma.

“I’ve spoken to people from every university theater in Oklahoma I can think of,” Coleman said. “They all say about the same thing, ‘It’s a lovely play, but we just don’t think we can do it at our university.”

“All these kids really wanted to hear the real history of Oklahoma,” Coleman said. “I think there’s a real thirst for that right now.”

Check your email for details.

Submitting this form below will send a message to your email with a link to change your password.

An email message containing instructions on how to reset your password has been sent to the e-mail address listed on your account.

Thank you. Your purchase was successful.

A receipt was sent to your email.