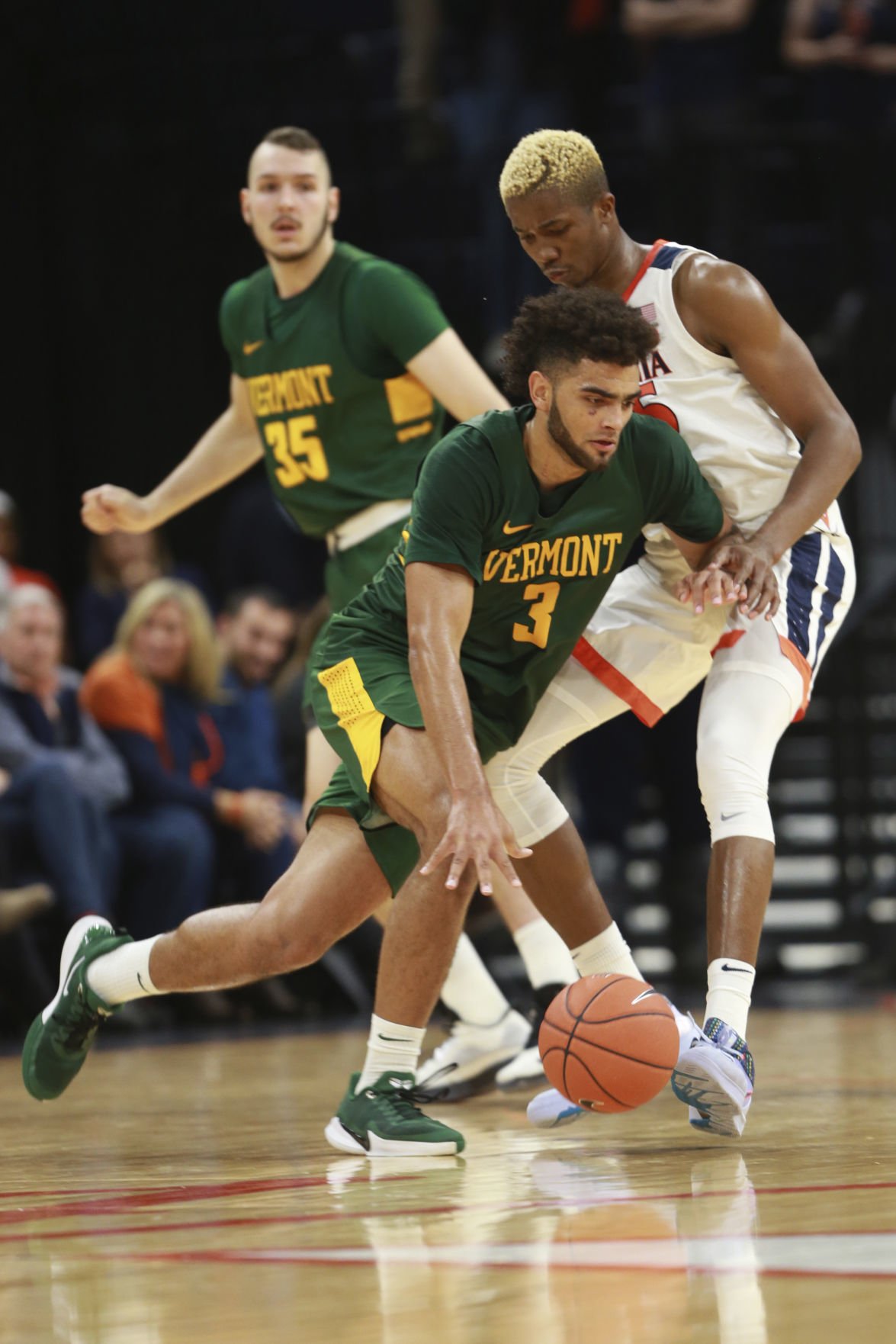 Vermont forward Anthony Lamb has been one the best small-school players in America over the course of his career. But in an alternate universe, he takes over the NCAA Tournament and leads the Catamounts to a national championship game. 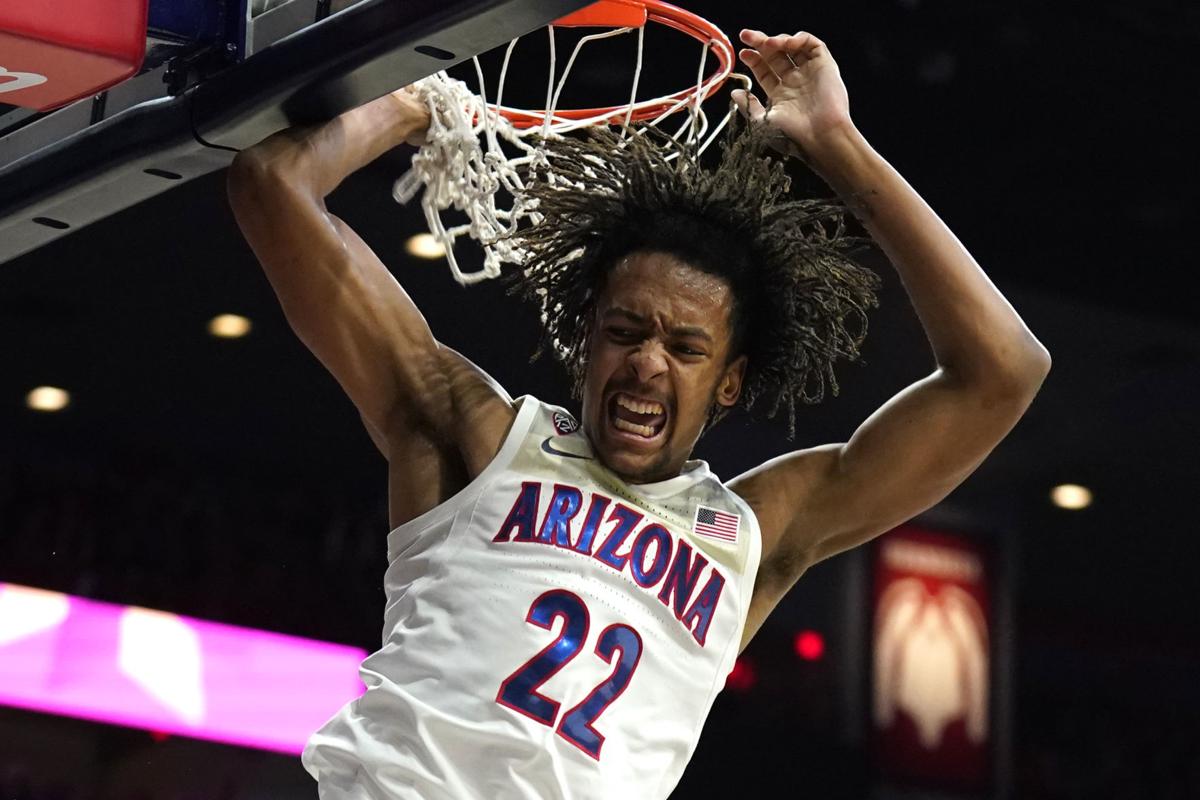 Arizona had talented young players like freshman forward Zeke Nnaji, but would the Wildcats have been able to claw their way all the way to a national title if the NCAA Tournament had not been canceled?

Vermont forward Anthony Lamb has been one the best small-school players in America over the course of his career. But in an alternate universe, he takes over the NCAA Tournament and leads the Catamounts to a national championship game.

Arizona had talented young players like freshman forward Zeke Nnaji, but would the Wildcats have been able to claw their way all the way to a national title if the NCAA Tournament had not been canceled?

Sports fans’ withdrawal from athletics is worsened by the constant reminders that baseball would have been starting by now, or that Thursday would have marked the first night of the NCAA Tournament’s Sweet 16. And perhaps the worst part of missing the 2020 NCAA Tournament is it was setting up to be a potentially wide-open free-for-all that we wouldn’t soon forget.

As the world tries to figure out how to cope with no March Madness, various outlets ran simulations of how a 2020 NCAA Tournament might have played out.

Because of O’Bannon vs. NCAA lawsuit regarding image and likeness (and because of dipping sales), there has not been a college basketball video game released in more than a decade. However, as owner of the last college basketball game 2K Sports ever made (a few bugs here and there, but surprisingly playable for a game made in 2007), a game which has a customizable NCAA Tournament mode, I had an idea.

Because of the interest in college sports, there are some people who continue to create yearly roster updates for these video games. So I ventured to the forums on Operation Sports and, thanks to users TreyzAllDayz and Brock (no relation), was able to download updated (for the most part) rosters.

I took the final projected bracket posted by ESPN’s Joe Lunardi and filled in a bracket in my game. Where And rather than play (or watch the computer play) all 64 games, I simulated each matchup and let the computer decide virtual fate of March Madness.

And boy, it was mad.

The first round produced some memorable upsets, which we will get to. However, let’s start with the storyline most locals care about.

According to Lunardi’s bracket, Oklahoma was projected as the 9 seed in the West region, facing LSU. In a rematch of December’s CFP semifinal, Oklahoma again found itself behind early, trailing 47-33 at halftime. Despite basically keeping even in the second half, OU fell, 74-61. The Sooners only made two of their 11 3-point attempts on the day. Kristian Doolittle had 17 points and six boards while Brady Manek contributed 14 points. And despite shooting nearly twice as many free throws as the Tigers, the Sooners missed 11 of their 28 foul shots.

As I said, there were plenty of big first-round upsets. We had 14 seed Vermont knocking off 3 seed Louisville. Led by Anthony Lamb and Stef Smith, the Catamounts hit 11 of 16 3-pointers in a 79-58 rout of the Cardinals.

Another 3 seed, surging Villanova, was stunned by Hofstra, who was making its first appearance in the tourney since 2001. There was 4 seed Maryland getting ousted by Akron, fellow 4 Wisconsin getting knocked out by North Texas and Auburn, a Final Four team from a year ago, fell victim to Liberty.

But no first-round upset was bigger than Boston University becoming just the second No. 16 seed ever to beat a No. 1 with a 59-49 win over Dayton. And while it may seem improbable, trust me, I ran the simulation three or four times. And each time, Dayton lost, as if the game was trying to prove that this was meant to be. National Player of the Year Obi Toppin was held to just four points.

In the second round, Baylor bowed out when Tyler Krebs, Jordan Ford and Malik Fitts led the Saint Mary’s Gaels to a 72-65 win over the Bears. Akron advanced past Butler to face Colorado, who ended Boston U’s dream.

Liberty knocked off North Texas, while 2 seeds San Diego State and Kentucky bit the dust to Arizona and Providence, respectively. Vermont, a program who entered the field with only one tournament win to its name, got its second in three days to advance to the Sweet 16.

In total, only half of the teams in the Sweet 16 were Top 4 seeds, and four of the teams were double-digit seeds.

In the history of the actual NCAA Tournament, there have been 28 instances of a 13 beating a 4. Of those 28, six have made the Sweet 16. But a 13 seed had never made the Elite 8. Well, 2020 is its own animal. And Vermont and Akron took advantage of not having to face 1 seeds and advance to the regional finals. Arizona also advances, while the rest of the Elite 8 is made up of teams many expected to be there. In all, the regional finals looked like:

In the East, diminutive point guard Loren Jackson led the Zips to a 66-64 win over Florida State. Meanwhile, Arizona, who barely got out of the first round against Texas Tech, put a stranglehold on Gonzaga in the second half to run away in with a 63-45 win.

In the South, Vermont got double-figures from five players, but there was no question who the main man was. Anthony Lamb continued to assert himself as the face of the tournament, going for 23 points and 12 rebounds in a shockingly easy rout of Creighton.

With Udoka Azubuike out with injury, Kansas got a big game from its other star, Devon Dotson, who had 17 points, 5 assists and 5 rebounds. But it was senior Mitch Lightfoot, whose previous career high for points was 11, who shot 7 of 8 to pour in 19 and lead KU past Duke and into the Final Four as the only No. 1 seed.

In the first game in Atlanta, Arizona built a 10-point halftime lead on Akron. Freshman Zeke Nnaji led all scorers with 17 points as the Wildcats took care of business, 73-59.

In the nightcap, Anthony Lamb went just 3 of 14 from the field, but made 7 of 8 free throws to end up with 12 points. He wasn’t the only Vermont player to capitalize from the charity stripe, as the team shoots an incredible 33 free throws. In fact, the Catamounts made more foul shots (24) than Kansas attempted (21). Jayhawk fans cry conspiracy. Vermont fans celebrate, as their team is playing in the championship.

Anthony Lamb had been the player of the tournament up to this point. And he continued to do a little bit of everything for the Catamounts in the title game, grabbing 7 rebounds and dishing out 7 assists to go with 18 points.

Arizona had a terrific freshman class in 2019, highlighted by point guard Nico Mannion and wing Josh Green. However, it was another freshman who became the star of this Final Four.

Nnaji (who, in real life, averaged 16 points and better than 8 rebounds to lead the Wildcats in scoring, field goal percentage and rebounding) leads the way as Arizona takes a 45-32 halftime lead.

Lamb and Stef Smith do their best to get the Catamounts back within striking distance, but it’s too little, too late. Arizona finishes the job, 79-69 to win the school’s second national title. The Wildcats also become the first team west of Kansas to win a national championship since 1997 when the title was taken home by...Arizona.

And despite Dylan Smith hitting 5 of 6 3-pointers for Arizona, Nnaji was still the straw that stirred the drink, finishing the game with 21 points, 10 rebounds and the tournament’s Most Outstanding Player award.

Now, some of this may seem far-fetched. A 16 beating a 1 again? Two 13 seeds in the Final Four? That would never happen, right?