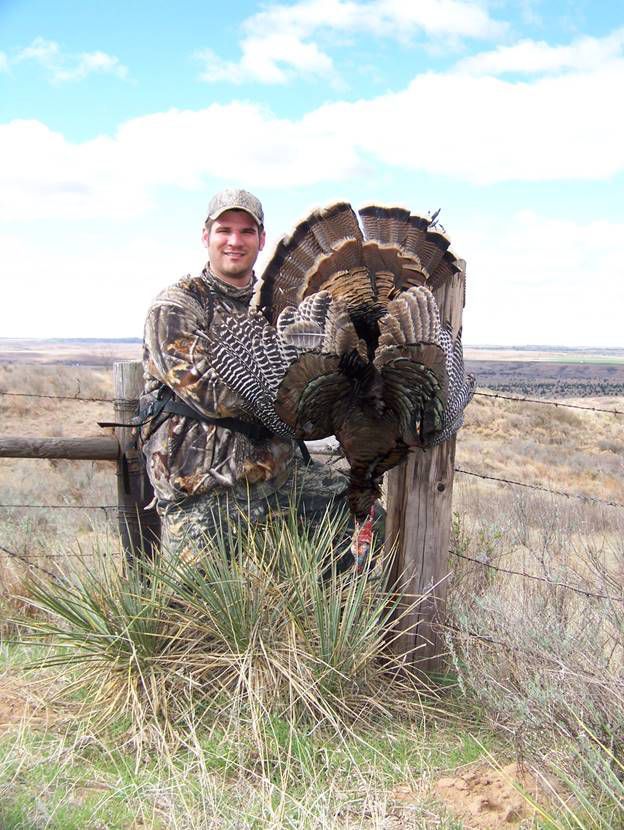 Ryan Ryswyk shows off a nice Rio Grande turkey harvested a couple of years ago. Turkey season starts Monday, and hunters will have until May 6 to harvest a gobbler. 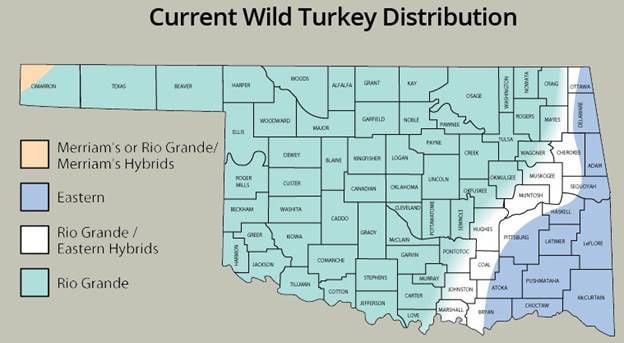 Ryan Ryswyk shows off a nice Rio Grande turkey harvested a couple of years ago. Turkey season starts Monday, and hunters will have until May 6 to harvest a gobbler.

April 6 marks the first day of spring turkey season in Oklahoma, and thousands of hunters will make their way in to the woods for another year of hunting. With the COVID-19 situation and associated social distancing, turkey hunting might be an option to safely get away for a while and just enjoy nature.

The season runs through May 6 and is open to shotgun and archery equipment. And new for this year, nearly every county in Southwest Oklahoma has a two tom limit. Kiowa County is the only exception to that regulation, it still has a one bird limit. For regulations, specific firearms and archery requirements and a state map showing individual county bag limits, consult the current “Oklahoma Hunting Guide.”

Oklahoma is home to two main subspecies of wild turkeys — the Rio Grande and the Eastern — but occasionally the Merriam subspecies can be found in the far western edge of the Panhandle. According to biologists with the Oklahoma Department of Wildlife Conservation, hunters should be successful during turkey season in areas across the state. See the Oklahoma Slam sidebar.

“Turkey populations are lower overall, but landowners are reporting good numbers of jakes,” said Ron Smith, Senior Wildlife Biologist for the Wildlife Department. “Habitat is much improved over last year, and mild temperatures and timely rains have led to a solid green-up.”

Turkey activity varies across the Southwest region, said Smith, with birds beginning to move away from their winter roosts in most areas. Since then, smaller groups of hens and jakes have begun to separate themselves as they spread across their range. By opening day, birds should be spread out across usual breeding areas. Mature gobblers began to strut and separate themselves.

According to Smith, lower turkey numbers and birds moving into new areas make scouting more important than ever. Be willing to spend the day following turkey activity. Gobblers may be more easily called away from hens later in the day. Landowners have also reported seeing turkeys moving into new areas and an absence of birds in historic areas.

If hunters don’t have access to private land, Smith recommends Black Kettle, Packsaddle, Waurika, Fort Cobb, and Sandy Sanders WMAs. Be sure to consult the Hunting Guide for WMA regulations.

The wild turkey in Oklahoma is part of an enormous conservation success story. In the 1920s, wild turkeys were very rare in Oklahoma and all across the nation. Overharvest from market hunting, timbering for construction of homesteads, land use changes and market logging in Oklahoma’s early years took a toll on the wild turkey, but a stocking program by the Wildlife Department in the late 1940s helped re-establish the wild turkey to its former range across the state.

Hunters may use shotguns with pellets, or archery equipment for the spring season. Rifles, pistols or muzzleloaders that shoot single bullets are not allowed.

For requirements on who must accompany apprentice hunters in the field, or for more information about the spring turkey season, consult the current “Oklahoma Hunting Guide” or log on to the Wildlife Department’s Web site at wildlifedepartment.com.

Here are some more tips offered by ODWC Biologists to make your season more successful:

Trying to get too close while birds are on the roost. This is an easy and costly thing to do early in the season when there aren’t a lot of leaves out on trees. Be sure to be cautious when setting up in the mornings.

Calling too much. Lots of hunters like to hear those gobblers gobbling back, but excessive calling is not a normal interaction between turkeys in the wild and can often cause toms to hang up.

Underestimating a turkey’s vision. Decoys help distract a turkey’s attention, but be sure to move only when they cannot see you.

There is a famous adage: “By failing to prepare, you are preparing to fail.” While it probably didn’t originally refer to turkey hunting, it still applies. Wipe the dust off that old shotgun and pattern some loads.

Hunters often forget that turkeys “live there all day.” Discounting the rest of the day is a common mistake. Turkeys are subject to sound off throughout the day.

With all the rainfall, lakes and rivers are up. Some areas may be inaccessible or harder than usual to get to.

Pay attention to your setup when you get ready to call a bird. Be mindful of obstacles such as thickets, creeks, or fencerows. Turkeys often don’t want to cross these and will “hang up.”

Try to be uphill of the bird, as they are often reluctant to come downhill to a call.

Pay attention to the birds’ subtle communications and work your way into their system.

If you’re a turkey hunter, you’re used to making decisions. And, after choosing the right turkey loads, camouflage, decoys and calls before entering the spring woods, it’s a relief when the final decision of the hunt is how to care for and cook your bird.

Cleaning your turkey is the first step, and regardless of whether you plan to skin, pluck or breast out and cut up your bird, doing it properly is both quick and easy. The National Wild Turkey Federation has the following tips for cleaning your bird.

1. If you don’t plan to cook your bird whole, start by laying the turkey on its back. Remove just enough breast feathers so as to expose the skin.

Plucking vs. Skinning — Considered the traditional style of cleaning a wild turkey, plucking is a perfect way to prepare your bird to be roasted, smoked or whole deep-fried. Before you remove the entrails or field dress the turkey pluck the turkey’s feathers to help keep the moisture in the turkey while cooking it whole.

Remove the feathers after dipping the bird in hot water. Some people use boiling water but it has been said that 140-degree water is optimal for plucking a bird. Plucking does take time and produces more of a mess than does skinning; however, the taste of deep-fried or roasted turkey skin is worth the effort.

Many of today’s turkey hunters prefer skinning to plucking. Skinning a turkey allows you to cook the bird by frying or grilling the pieces of meat. You can skin and fillet the turkey breasts, and slice as much meat from the legs and wings as necessary.

Make a cut just along one side of the breastbone. Then, it’s just a matter of working the skin off the breast halves, down the back and over each of the legs. In some states it’s illegal to only fillet the breast out, leaving the rest of the carcass behind.

Always check your state’s hunt regulations, and make sure your turkey is properly tagged for transportation.

So you’ve harvested a nice tom turkey and before you clean it with the above tips, you are wondering how it compares to other turkeys harvested around the state or country. Much like scoring a deer, you can calculate the score of your turkey with the scoring calculator found on the National Wild Turkey Federation’s website nwtf.org.

Take down a few measurements and then plug them in to the scoring calculator and you will be given a score for your bird. Then you can compare it to other birds in the same category.

Before you begin to score your turkey, be sure to note that all measurements are taken in 1/16-inch increments and converted to decimal form. A current NWTF member or another licensed hunter from the state where the bird was harvested must verify all measurements.

Step 1: Weigh your bird in pounds and ounces and convert ounces to decimal form.

Step 2: Measure each spur. Spurs must be measured along the outside center, from the point at which the spur protrudes from the scaled leg skin to the tip of the spur. Add both spur measurements and multiply the combined length of the spurs by 10. This is the number of points you receive for the turkey’s spurs.

Step 3: Measure the beard length (a beard must be measured from the center point of the protrusion of the skin to the tip) and convert it to decimal form.

Step 4: Add together the weight, the points for spurs and points for beard(s): This is the score you receive for your turkey.

By using the Wild Turkey scoring method, you can compare toms by size, beard length, spur length, state, subspecies. Since the NWTF started keeping records in 1982, more than 12,000 birds have been registered. To get your name on the list, log on to the NWTFs website at nwtf.org.

According to the Federations data base Kyna Holman of Hondo, Texas is the current record holder for Rio Grande sub-species at 168.75 points. Michael Fleharty holds the Oklahoma record with a Rio Grande that scored 157.12, taken in Jefferson County.

Can you bag an Oklahoma Slam?

The Holy Grail of turkey hunting across the United States is to harvest a Grand Slam, which …