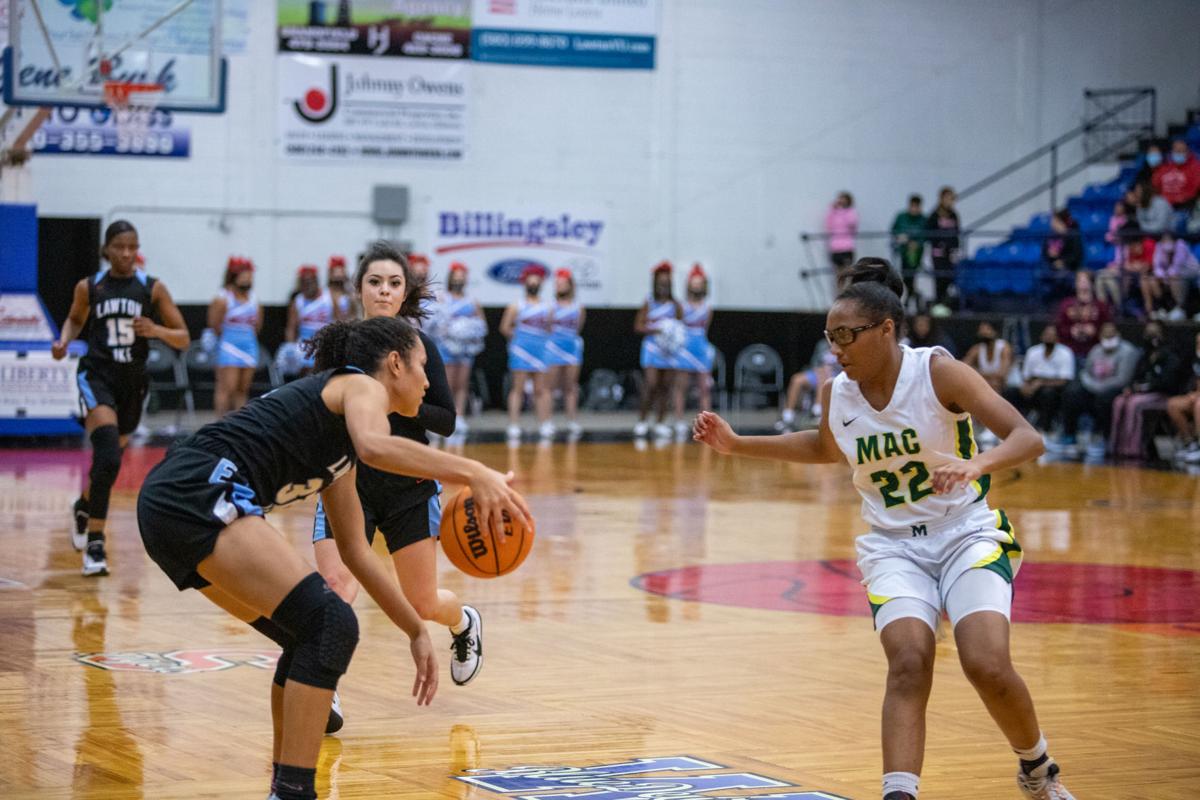 MacArthur’s Naomi Smith (22 in white) guards Mikaela Hall of Eisenhower during the first half of Tuesday’s game at the Great Plains Coliseum. 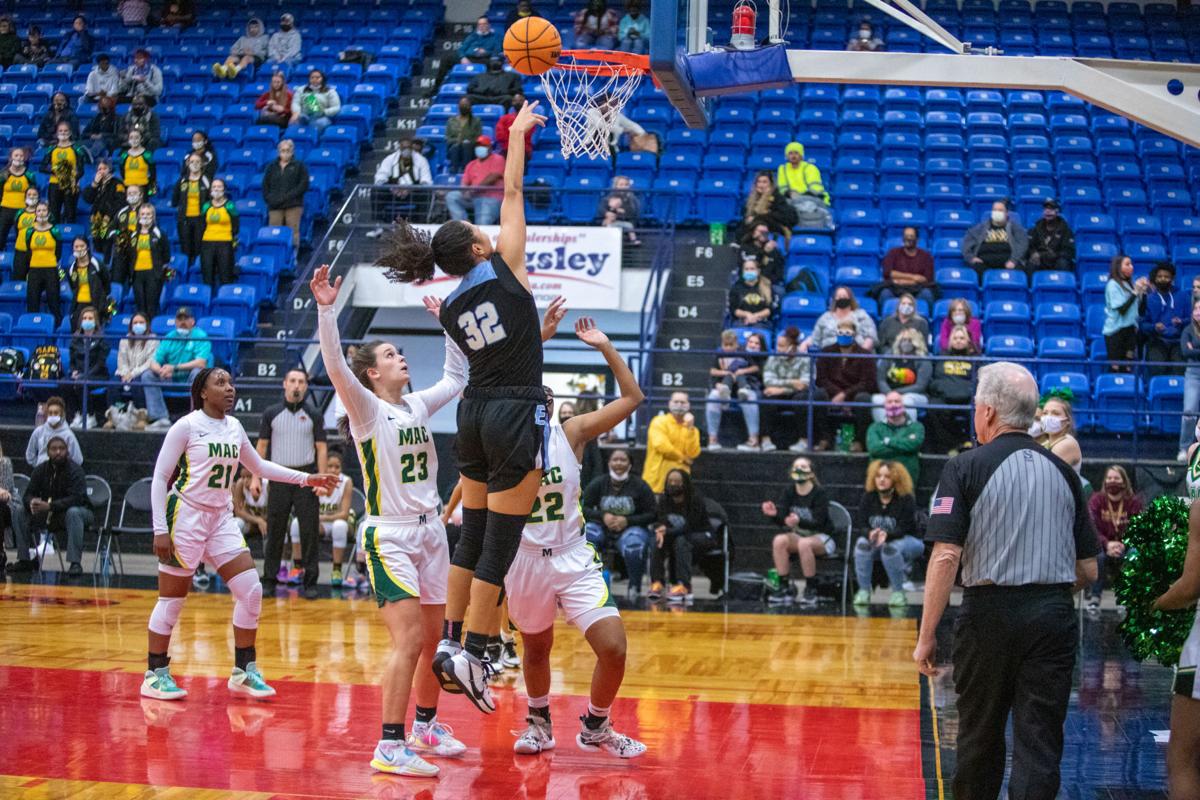 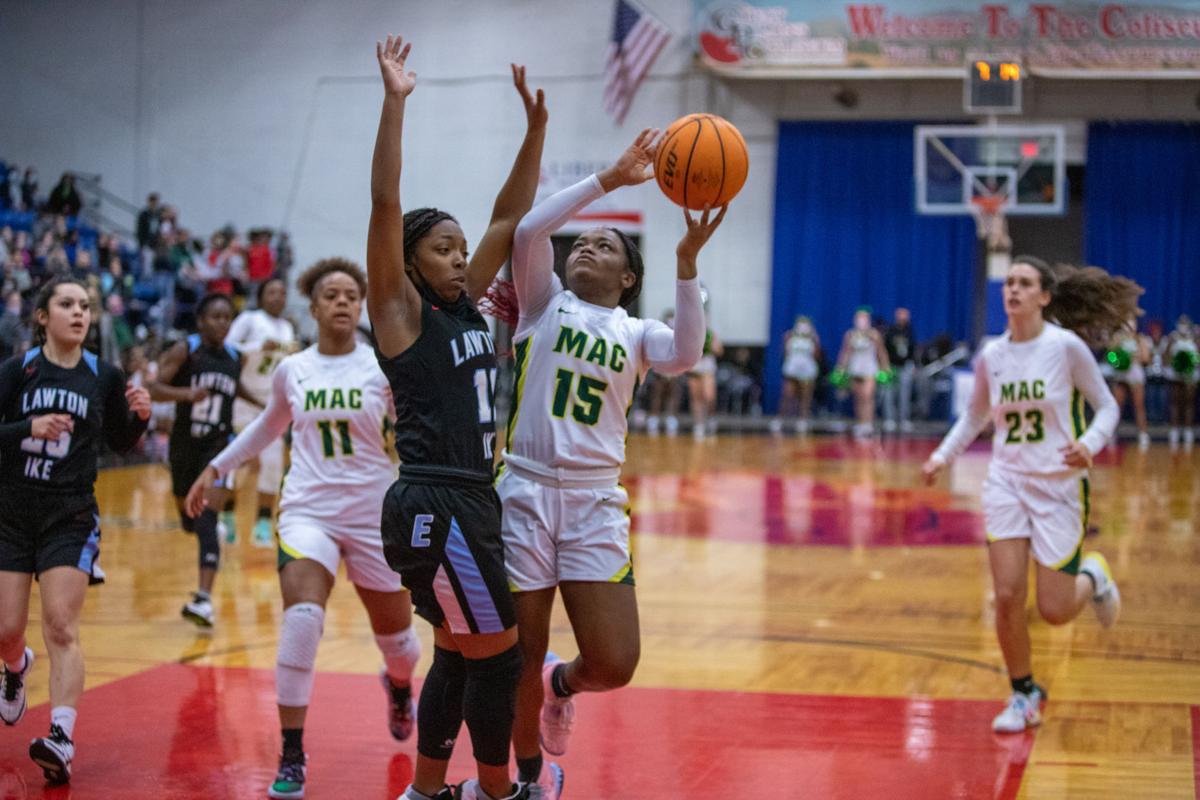 MacArthur’s Tajanah Mardenborough puts up a shot against Eisenhower’s Yazmine Williams during Tuesday night’s game at the Great Plains Coliseum. The Highlanders shot the ball well, forced turnovers and came away with a 65-44 win over Eisenhower.

MacArthur’s Naomi Smith (22 in white) guards Mikaela Hall of Eisenhower during the first half of Tuesday’s game at the Great Plains Coliseum.

MacArthur’s Tajanah Mardenborough puts up a shot against Eisenhower’s Yazmine Williams during Tuesday night’s game at the Great Plains Coliseum. The Highlanders shot the ball well, forced turnovers and came away with a 65-44 win over Eisenhower.

The crowd may have been smaller than usual, but the air of excitement was still what one would expect from a MacArthur-Eisenhower basketball showdown.

Although just 600 people were allowed at the Great Plains Coliseum due to COVID restrictions, the atmosphere was still electric, and added a unique neutral-site element not seen in years in one of the fiercest rivalries in the area.

But it was the half of the arena in green, black and gold that got to do all the celebrating Tuesday night as MacArthur took both games in the first city rivalry game of the year between Lawton schools. The Mac girls applied pressure and got 24 points from Natalie Smith in a runaway 66-45 win over Ike.

The No. 3 Mac boys withstood a warp-speed first quarter and outran, outgunned and outplayed Eisenhower the rest of the way in a 96-69 win.

“We have a good shout as a team before the game, get the nerves out,” Gentry said.

It certainly seemed to work on Tuesday, as the Highlanders didn’t look the slightest bit nervous.

In what was supposed to be a matchup between two potential state tournament teams in Class 5A, No. 5 MacArthur appeared locked in from the opening tip. MacArthur’s defensive pressure — epitomized by its full-court press caused problems for Eisenhower. McKenzie Washington had three steals in the first quarter alone. Ike began to get frustrated. With three minutes left in the first quarter, a technical foul was called on Eisenhower.

Natalie Smith punctuated the first quarter with a turnaround jumper that hit nothing but net, making it 17-8 Highlanders at the break.

The senior did herself one better at the end of the second quarter, intercepting a Ike pass and throwing up a shot from behind the arc in the final seconds. In a battle against the clock, Smith was judged by the officials to have gotten the ball off in time and once again swished the net, sending Mac to halftime with a 16-point lead.

She finished with 24 points, a performance that came as no surprise to Gentry, who also coaches her in the summer.

“Every year, her game is improving,” Gentry said. “Tonight, she showed herself to be one of the best players in 5A.”

Smith drilled four of the team’s five 3-pointers on the night. It’s an aspect that Mac struggled with at times in the weekend’s MidFirst Warrior Classic in Anadarko. But it’s also an area the team works on constantly.

“I think we’re getting better at shooting 3-pointers,” Gentry said. “It depends on what type of defense the opponent plays. In practice, we shoot a lot of 3’s and they come in on their own and shoot 3’s.”

After trailing by 20 at one point, the Eagles cut the lead to 10 late in the third quarter. But the Highlanders didn’t let up. Washington, also a senior, had 20 points on the night, while fellow seniors Tamera Thomas and Naomi Smith each added 7.

The Highlanders (7-4) host No. 7 El Reno on Thursday and Duncan on Friday.

In the first quarter, the Eagles attempted to do what few teams have been able to do this season: run with the Highlanders. With their quick guards like Cory McClelland, Eisenhower had some success, trailing by just 2 with 2:30 left in the quarter. Ike also had an advantage in the paint with 6’7 Jamel Graves, who took control of the paint early.

Arzhonte Dallas’ 3-pointer and fast-break basket with just over 3 minutes left in the first half put the Highlanders up 18.