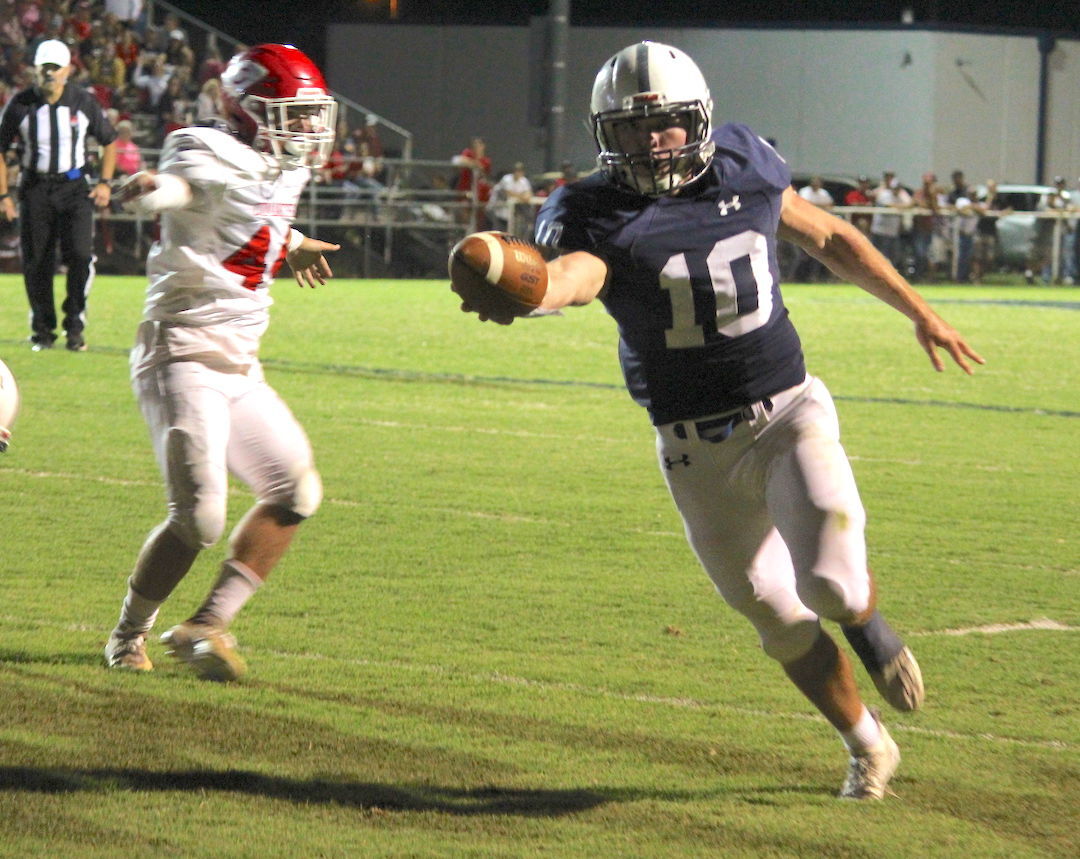 Marlow quarterback Jace Gilbert scores on a 6-yard run in the second quarter of Friday's 36-0 win over Comanche. 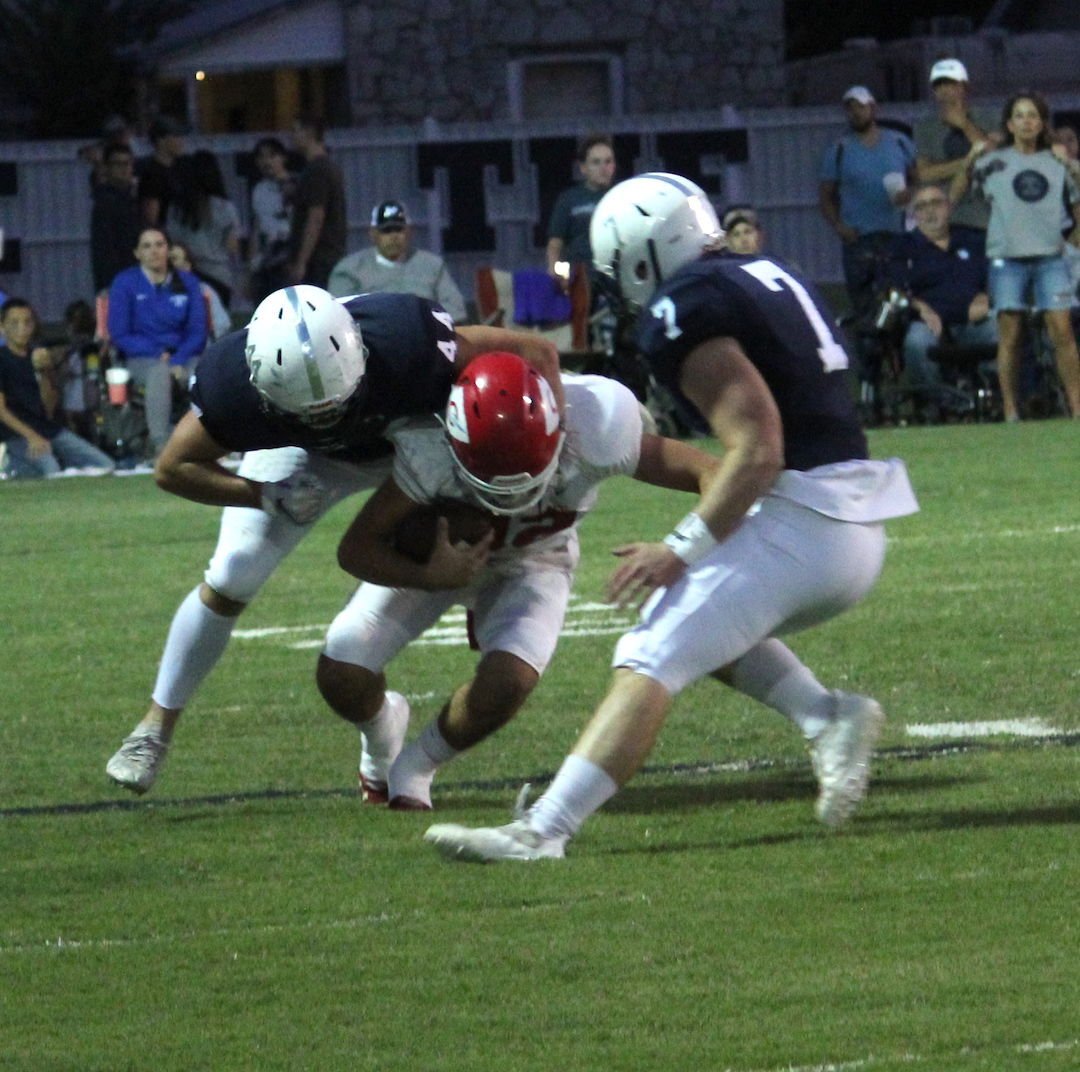 Comanche quarterback Kooper Doucet (center) is brought down by Marlow defensive end Brennan Morgan (44) and linebacker Kyle Wilson during the early stages of Friday's game in Marlow. The Outlaws' defense harassed Doucet for most of the night as No. 3 Marlow won, 36-0. 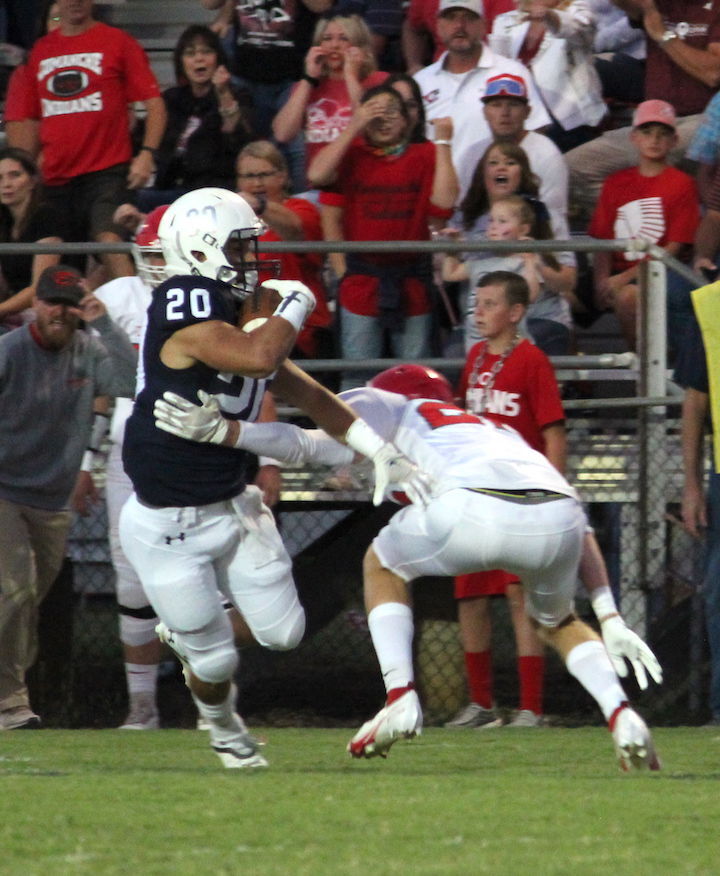 Marlow running back Julian Marroquin evades a Comanche defender on his way to a 37-yard touchdown run in the first quarter of Friday's game.

Marlow quarterback Jace Gilbert scores on a 6-yard run in the second quarter of Friday's 36-0 win over Comanche.

Comanche quarterback Kooper Doucet (center) is brought down by Marlow defensive end Brennan Morgan (44) and linebacker Kyle Wilson during the early stages of Friday's game in Marlow. The Outlaws' defense harassed Doucet for most of the night as No. 3 Marlow won, 36-0.

Marlow running back Julian Marroquin evades a Comanche defender on his way to a 37-yard touchdown run in the first quarter of Friday's game.

MARLOW — If Marlow was going to prove It deserved to be considered among the elite in Class 2A this season, Friday night was said to be the Outlaws’ first real chance.

Comanche was seen as a possible step up from some of the competition Marlow had faced through the first three weeks. Add in a passionate rivalry, plus the fact that Comanche was seeking its first 4-0 start (and first win over Marlow) since 2011, and there was plenty at stake in this district opener.

But whatever motivating factors Comanche had coming in made little difference, as Marlow’s defense suffocated the Comanche attack and Jace Gilbert accounted for three touchdowns as the Outlaws dominated in a 36-0 rout in front of a charged atmosphere at Outlaw Stadium.

The Outlaws, ranked as 2A’s No. 3 team in the latest AP poll, started by relying on their steady ground game. After three run plays, coupled with a penalty against Comanche, placed the Outlaws at the Comanche 37 yard line. The next play, running back Julian Marroquin found a crease, escaped multiple would-be tacklers on his way to the game’s opening touchdown.

Comanche’s first offensive drive appeared to be in reasonable shape after a pass from Kooper Doucet to Mason Kulbeth set up a manageable 3rd-and-4. But in a harbinger of things to come, negative plays would doom the Indians’ momentum. Doucet was sacked by Brennan Morgan and Kyle Wilson, and the ensuing punt was pushed back due to a penalty.

Marlow head coach Matt Weber reached into his bag of tricks on the very next play from scrimmage. Quarterback Jace Gilbert lined up as a receiver, and came around end on a reverse, where he received the ball in pocket. Once he did, he spotted his favorite target, Will Bergner, wide open downfield. Bergner turned the play into a 47-yard touchdown.

“We always have one or two gadget plays for every game, just ones that we expect to get big gains or touchdowns on,” Weber said. “That just happened to be the one tonight.”

Comanche continued to fight valiantly. Doucet, who struggled at times against Marlow last season, was 16 of 22 for 184 yards. However, facing constant pressure from the likes of Brennan Morgan, Josiah Johnson, Gus Morgan, Cody Huber and Kyle Wilson, it was hard for Doucet to find time to throw. But as Weber pointed out, many of the sacks were a result of nobody downfield being open.

“A lot of those were coverage sacks,” Weber said. “We stayed in our coverage, our guys just happened to get after him a few times.”

Comanche had a couple of potential big plays go against them, both in somewhat contentious fashion. In the final minute of the first quarter, Gilbert lobbed a pass down the sideline for Bergner, who was draped by Kulbeth and Devon McCarty. McCarty and Bergner both had hands on the ball and both claimed to have possession. But the officials ruled Bergner maintained possession and Gilbert tacked on a rushing touchdown just a few plays later.

The other big blow came early in the third quarter. Desperate to find some sort of spark, Comanche moved the ball down within the Marlow 2 yard line. Doucet attempted a quarterback sneak and looked primed to score. But just as Doucet appeared to be extending the ball past the goal line, the ball was instead punched out. Bergner picked up the ball and returned it past midfield. Marlow then responded by scoring on a two-play drive, both run plays by Cole Hayes, who scored from 20 yards out. Avery Payne added the game’s final score on a 60-yard catch-and-run from Gilbert.

Gilbert finished 6 of 8 for 162 yards and 2 touchdowns passing, while adding 48 yards and a score on the ground. But per usual, the x-factor was Gilbert’s foot. Regarded as one of the best specialists in Oklahoma, Gilbert’s kickoffs and punts forced Comanche to start at its own 19 on average, while Marlow was usually starting drives at its own 40.

Although Marlow may have made parts of the game look easy at times, Weber said the final score wasn’t necessarily indicative of the two squads.

“That’s a pretty good football team we held to zero points, a really talented football team,” Weber said. “I just think we’re getting better every week and that’s our goal.”