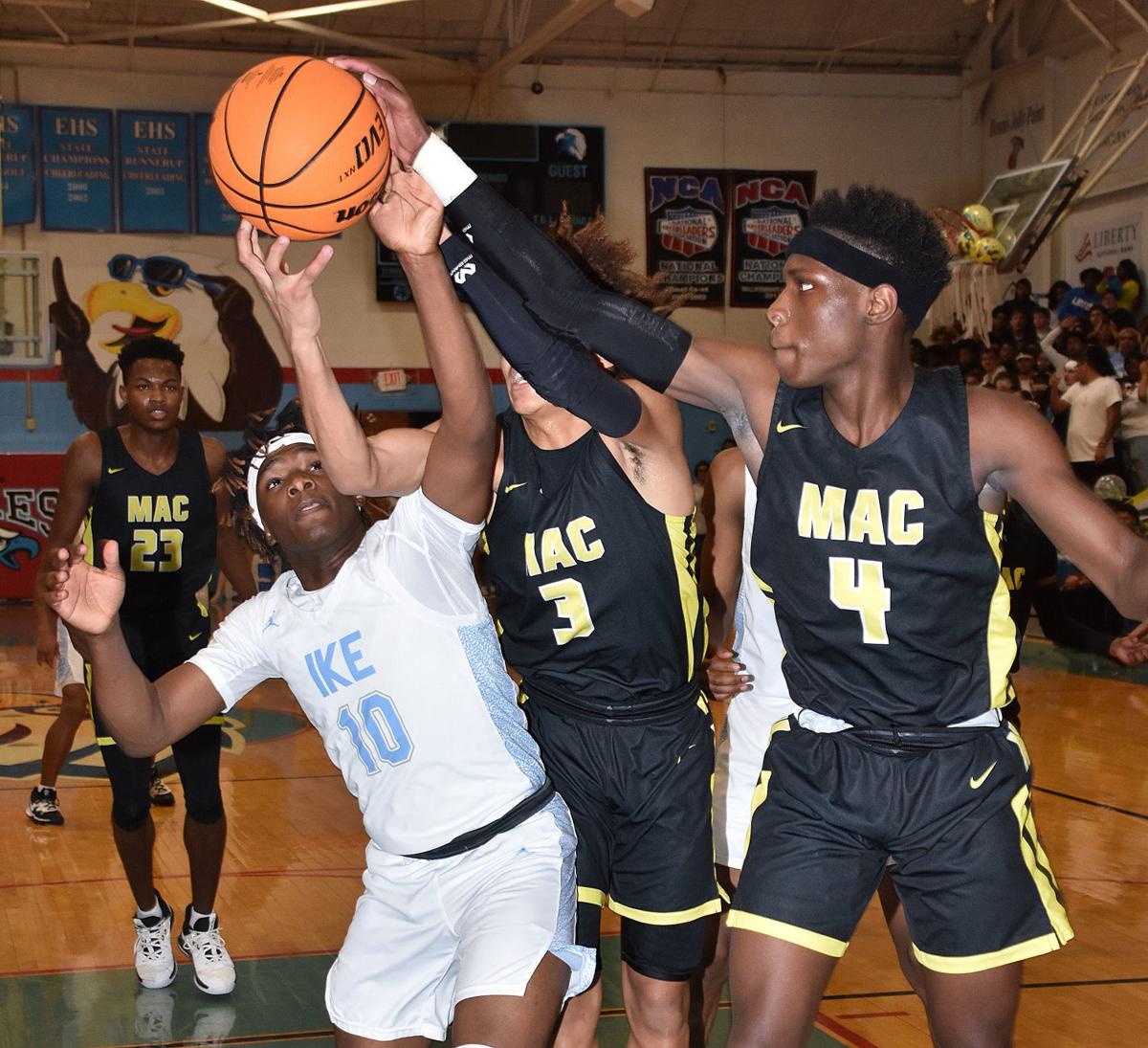 Dwan McNeil finds the going tough inside the paint as MacArthur defenders Danquez Dawsey and Arzhonte Dallas combine to take the ball away during the first half of Tuesday’s game at the Ike Gym. The Mac boys earned a 77-55 victory. 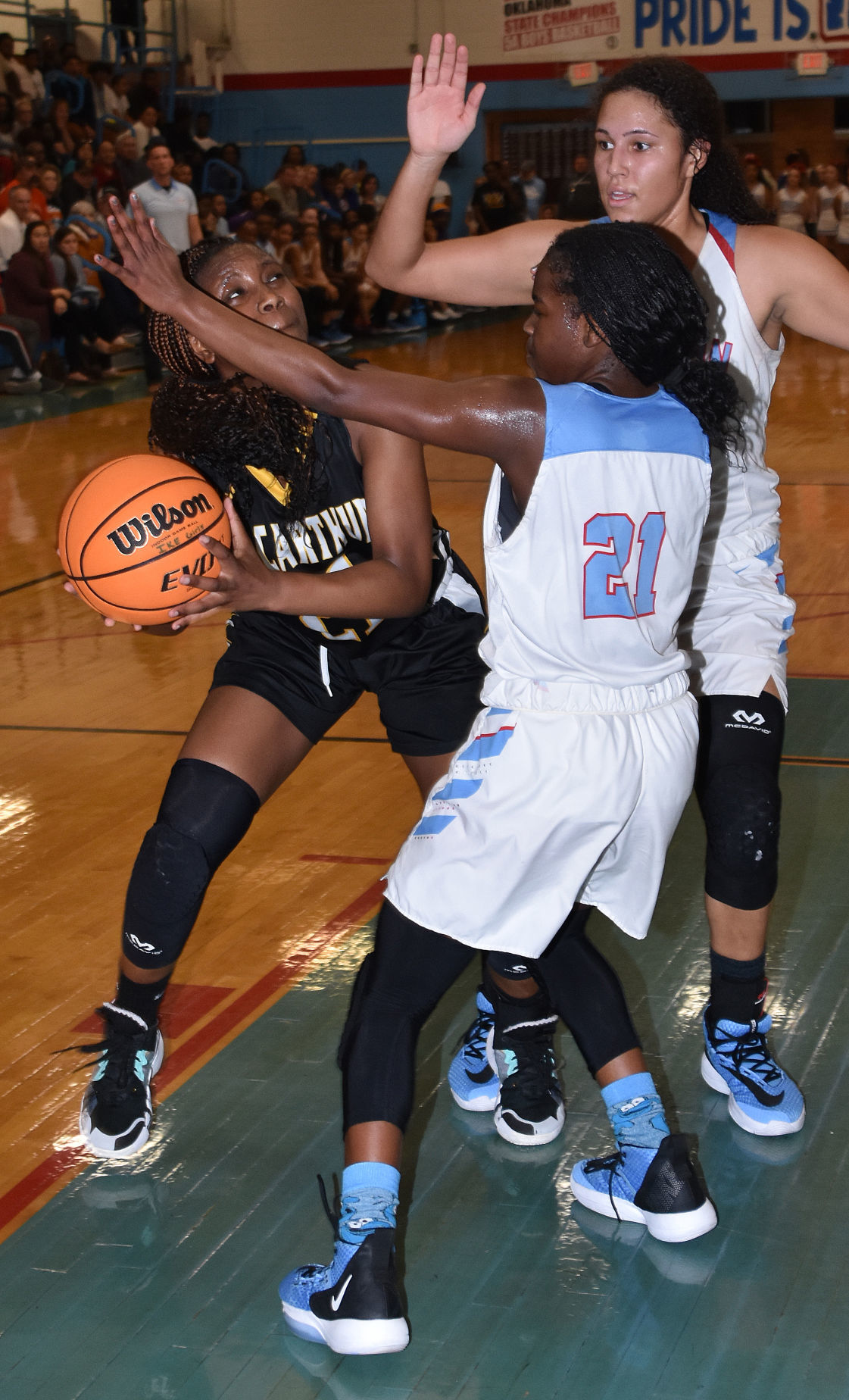 MacArthur’s Tamera Thomas tries to find a path to the bucket under fierce defensive pressure from Eisenhower’s Ky’Lan Seaton and Mikaela Hall during Tuesday’s game at the Ike Gym. The Mac girls pulled out a tense 50-47 victory.

Dwan McNeil finds the going tough inside the paint as MacArthur defenders Danquez Dawsey and Arzhonte Dallas combine to take the ball away during the first half of Tuesday’s game at the Ike Gym. The Mac boys earned a 77-55 victory.

MacArthur’s Tamera Thomas tries to find a path to the bucket under fierce defensive pressure from Eisenhower’s Ky’Lan Seaton and Mikaela Hall during Tuesday’s game at the Ike Gym. The Mac girls pulled out a tense 50-47 victory.

In front of a packed house at the Eagles’ Nest, the city’s two 5A teams clashed in their first meeting of the basketball season.

The highly-anticipated girls game between top-10 teams didn’t disappoint. With five seconds left and trailing by three, Ike inbounded the ball beneath the Mac goal. Kelvianna Sanders, one of the Eagles’ top 3-point shooters, received a pass deep behind the 3-point line. However, her shot was too strong and MacArthur came with a 50-47 win.

The boys game was closer than many expected, for the first half, at least. A week after being throttled by more than 50 at the hands of Lawton High, Eisenhower entered halftime trailing MacArthur by a score of 27-21. But the Highlanders got rolling in the second half, with takeaways leading to easy points in a 77-55 win.

Mac girls survive thanks to ‘next one up’ mentality

MacArthur not only had to survive a late offensive attack from Eisenhower to get a win, it had to survive the absence of its three-year starter at point guard near the end of the game.

Mac’s McKenzie Washington got into foul trouble early, picking up her third personal with more than two minutes left in the first half. As she continued to play, even after getting saddled with a fourth foul, it felt like more of a “when” than an “if” regarding whether the junior guard would foul out.

When she did, it was in possibly the worst way possible, as Washington picked up her fifth foul on a technical for slamming the basketball in response to a traveling call.

While this series of events could unnerve and deflate a team, MacArthur coach Otis Gentry said his girls faced the challenge and took it in stride.

“They’re used to playing where the next man has to step up,” Gentry said. “When she fouled out, I told them, ‘Next man step up, take care of the basketball and just stay focused.’”

But even with one of Mac’s top scorers out, the Eagles weren’t able to capitalize in the second quarter, as baskets by Alayna Vines and Erin Henry built the Highlander lead up to 10. But Ike coach Daniel Wall opted to play for the last basket of the half, which paid off as Ky’lan Seaton’s 3-pointer just before the end of the half made it 26-19 at the intermission.

The Eagles started the second half on a roll, tying the game twice, led by 3-pointers by Kelvianna Sanders and Anjoley Clayton. In the quarter, the pair combined for 13 of the team’s 18 points. Ike started the fourth quarter on an even more impressive run, with back-to-back steals caused by half-court traps leading to a 43-39 Ike advantage just a few possessions into the quarter.

Things got even worse for the black, green and gold as Thomas fouled out with the technical soon after. Mac called timeout. Momentum was decidedly with the home team.

But following the timeout, Mac’s defense forced several Ike turnovers, allowing the Highlanders to climb back into the game.

“We had ‘em shook, end of the third, beginning of that fourth,” Ike coach Daniel Wall said. “Coming out of that timeout, they went man, we turned it over in the halfcourt and you just can’t turn it over three or four times in a row.”

A pair of key plays signified the focus with which Mac played late. With 1:22 left, and with Mac holding a 3-point lead, Natalie Smith drew a charge call on Eisenhower’s Clayton. Smith finished the game with eight points and six rebounds.

In the game’s final minute and the game tied, freshman Tajanah Mardenborough made the first of two free throws, but missed the second. But as Ike’s Mikaela Hall came down with the rebound and looked for an outlet, Mardenborough had the presence of mind to dart into the passing lane, steal the ball and lay it in to give Mac the game’s final margin of victory.

Tamera Thomas was MacArthur’s star on the night, providing 10 points, seven rebounds and boundless energy on the defensive end. For Eisenhower, Mikaela Hall had 19 points and eight boards. Naomi Smith had nine rebounds.

MacArthur plays Duncan at the home of the Oklahoma City Thunder on Friday, while Ike hosts Choctaw next Tuesday.

Similar to the girls’ game, the boys’ game started with a flurry of missed shots. But the second half was a different story, especially for MacArthur, as great defense led to easy offense.

Brandon Cowan and Arzhonte Dallas each had at least four steals on the night as the Highlanders forced 25 turnovers. Cowan, who had already made three baskets from 3-point land in the first half, showed off his midrange game with six baskets from inside the arc in the third fourth quarters. Cowan finished with a game-high 21 points.

Dallas had five steals on the night, leading to many of his 13 points. When Ike did get shots off, Leontaye McClennon was there to clean the glass, finishing with 10 rebounds. Dallas, McClennon and Cowan were part of a quartet of Mac players who scored 13 or more points, with Earl Moseby pitching in 19.

“We turned up the defensive energy and execution,” Gagliardi said. In the first half, we had no execution defensively. Second half, we got back to the way we play.”