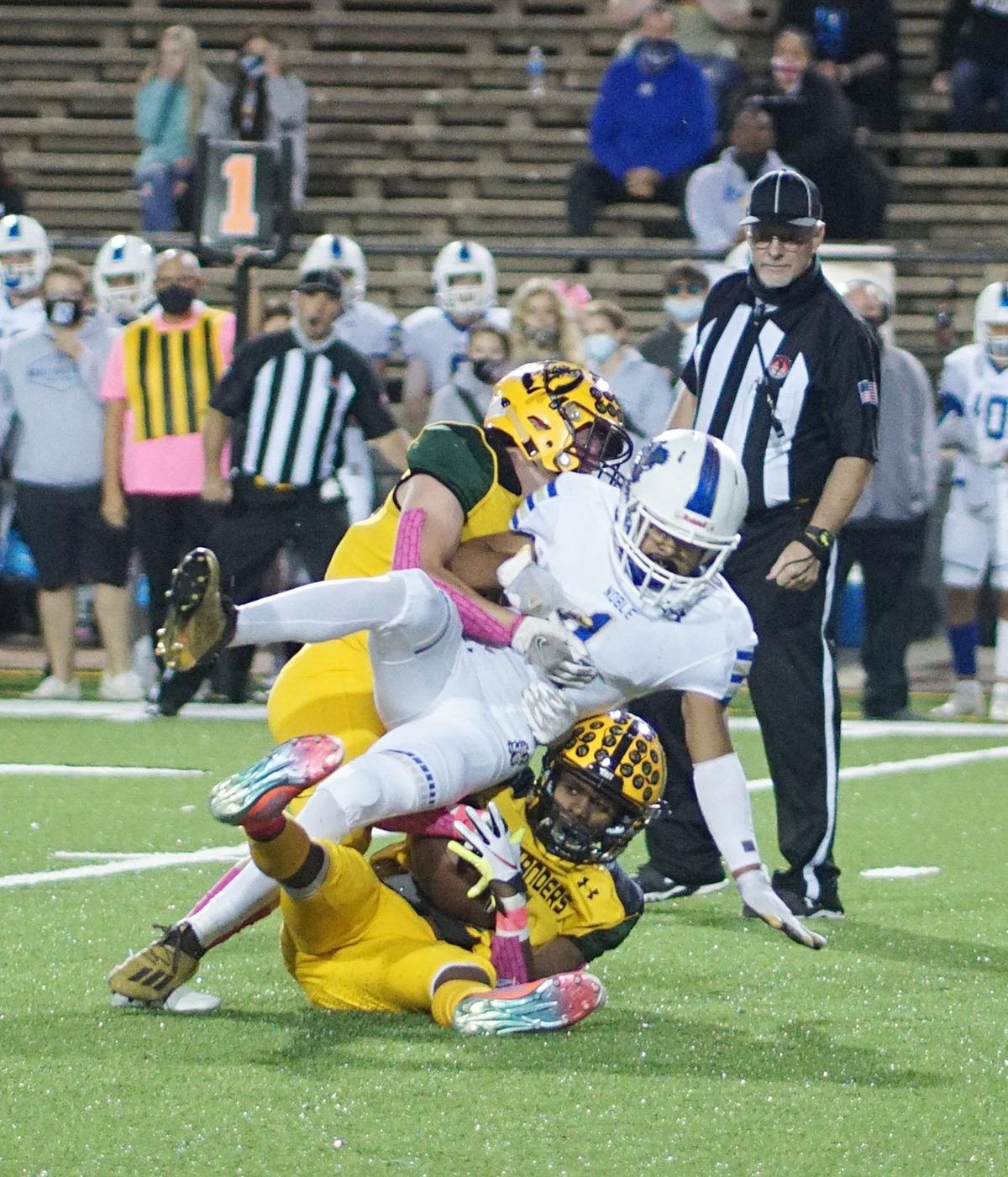 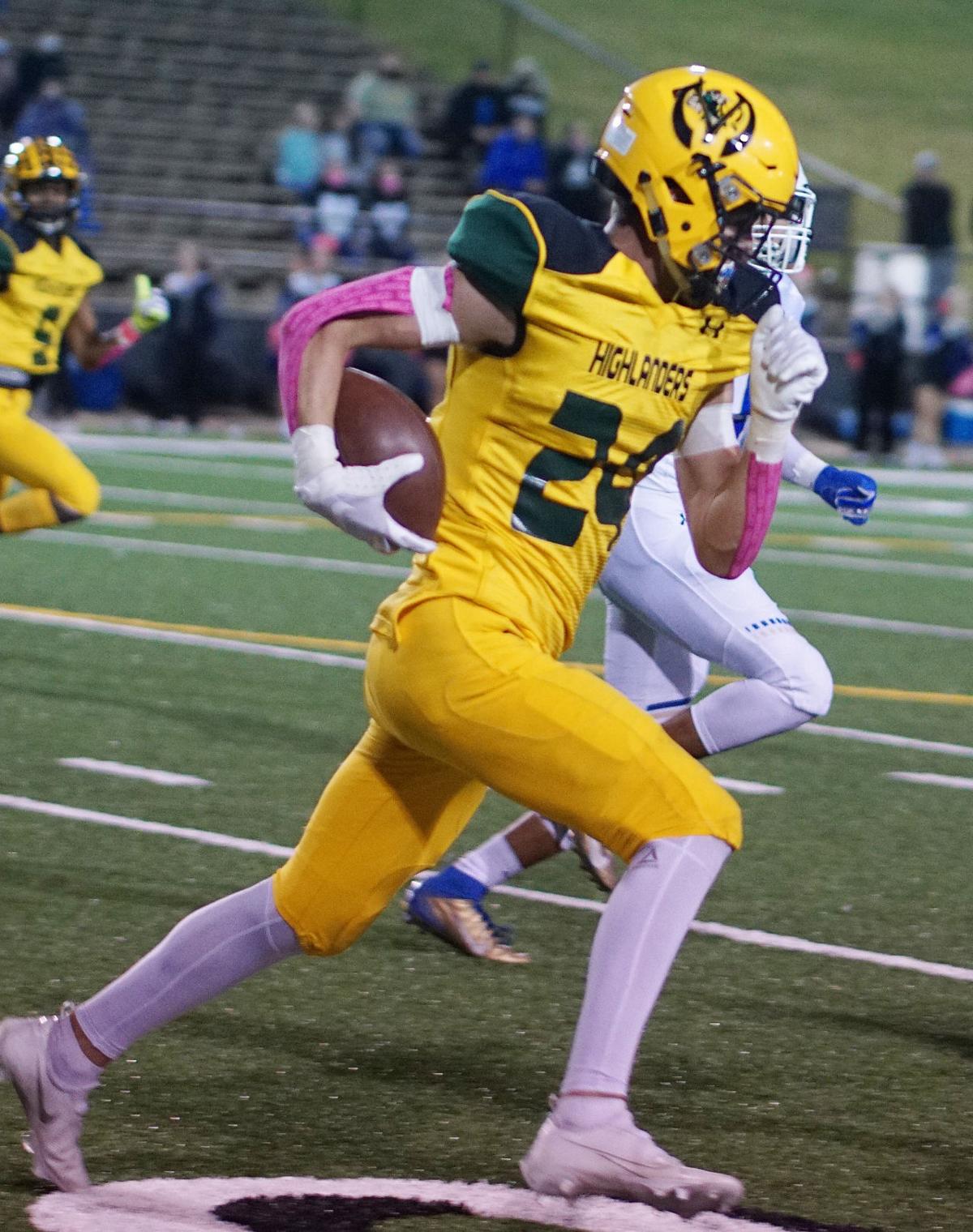 MacArthur's Vaughn Poppe finds daylight to run during the first half of Thursday's game. 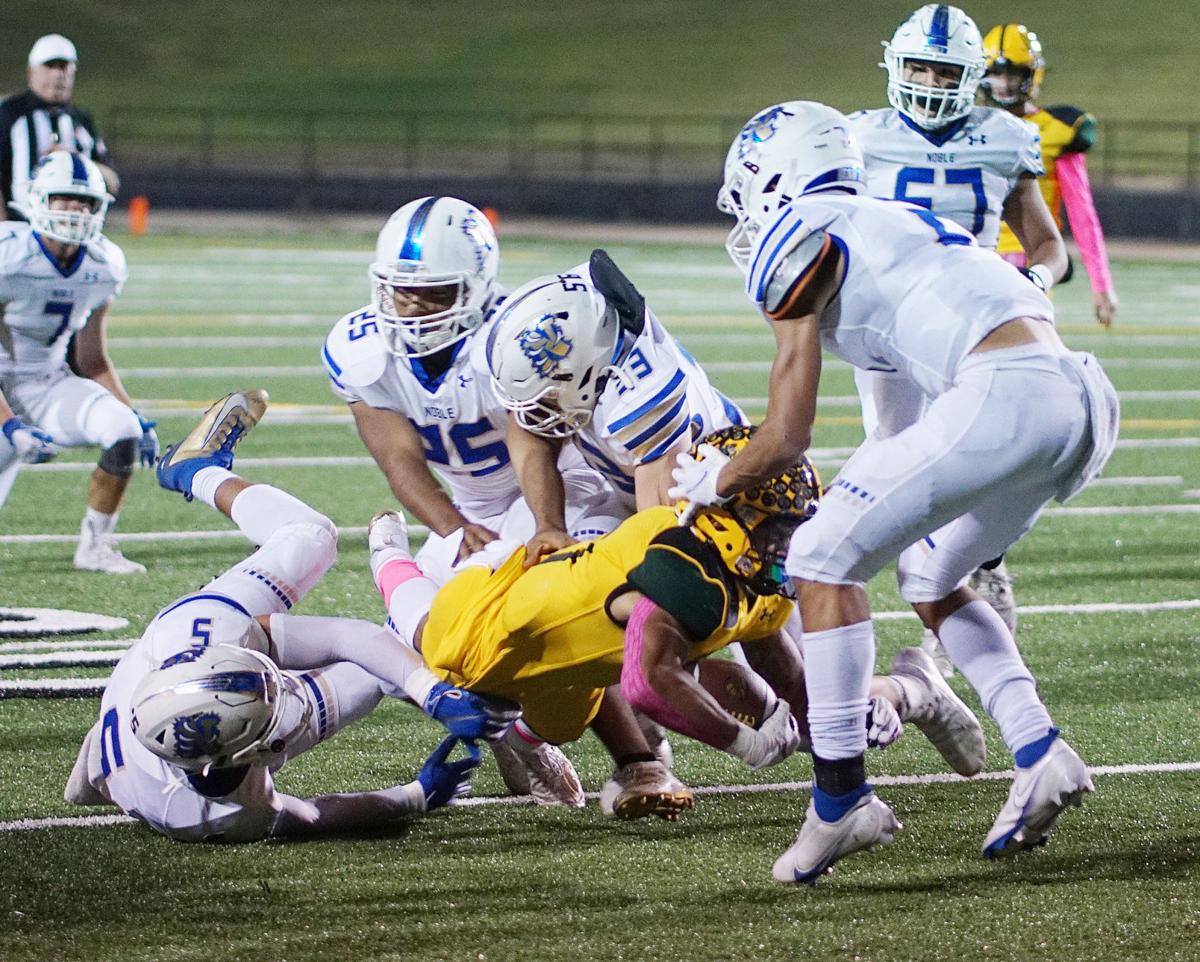 MacArthur's Nasir Kemper is brought down by a group of Noble defenders. 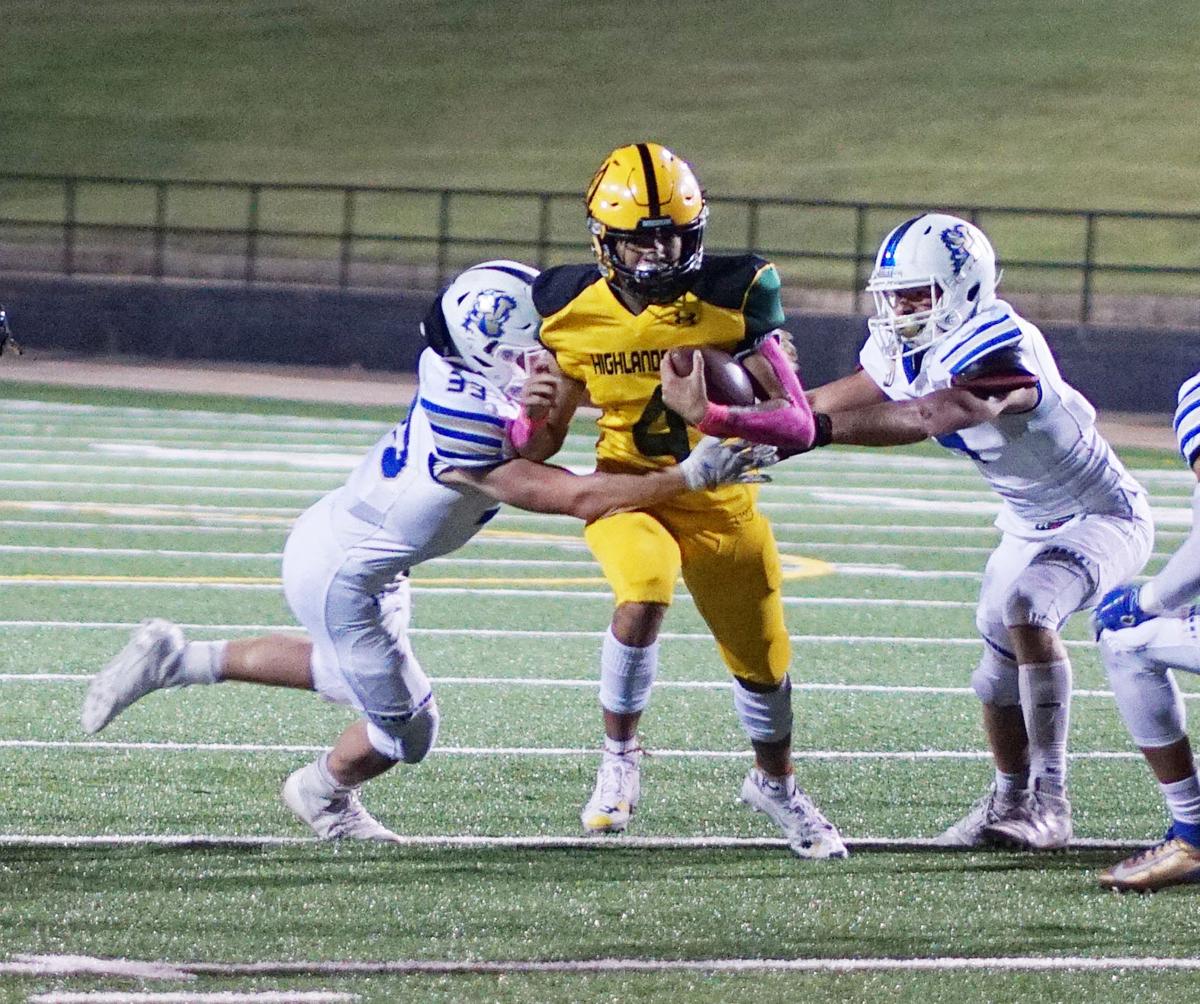 MacArthur running back Isaiah Gray runs through a pair of would-be tacklers for Noble on Thursday. Gray led all rushers with 108 rushing yards and three touchdowns. 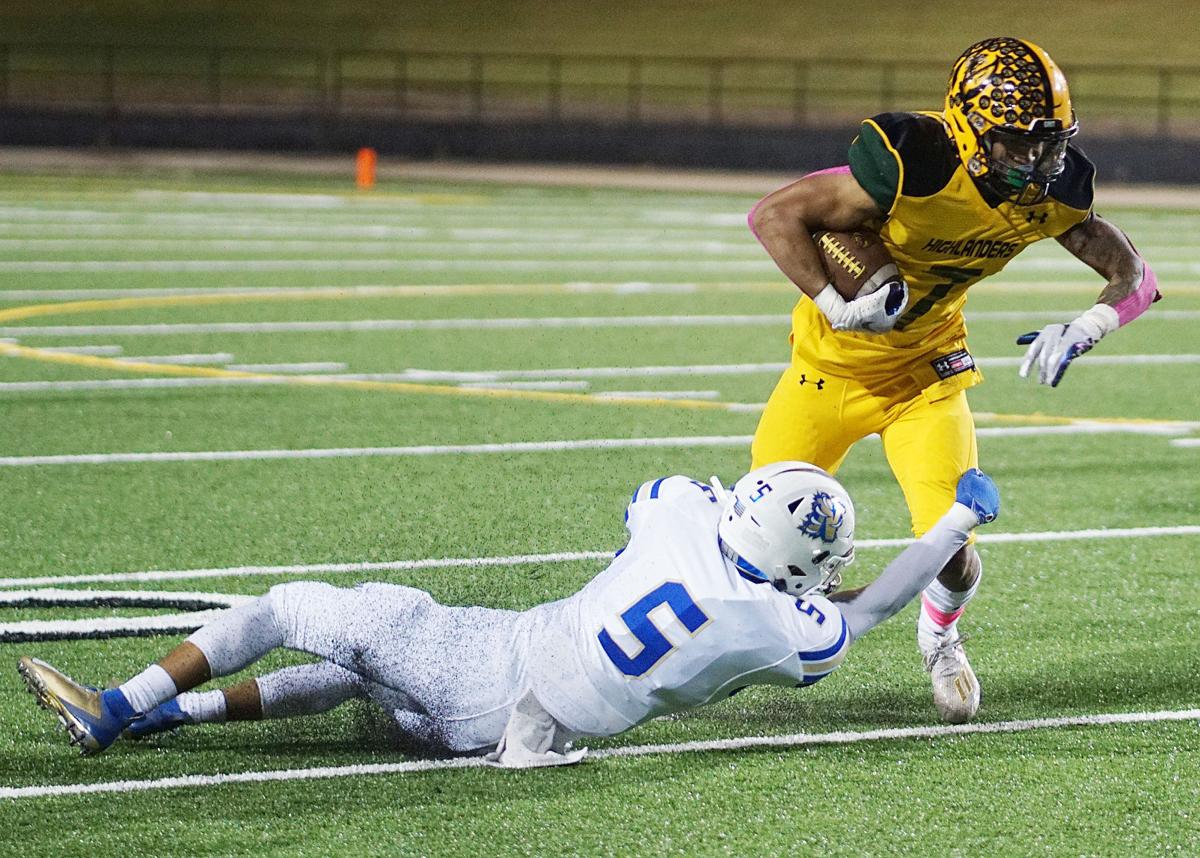 MacArthur's Nasir Kemper tries to escape the grasp of Noble's Gabe Hudson during Thursday's game. Kemper finished the game with more than 100 rushing yards and a 78-kickoff return for a touchdown as well.

MacArthur's Vaughn Poppe finds daylight to run during the first half of Thursday's game.

MacArthur's Nasir Kemper is brought down by a group of Noble defenders.

MacArthur running back Isaiah Gray runs through a pair of would-be tacklers for Noble on Thursday. Gray led all rushers with 108 rushing yards and three touchdowns.

MacArthur's Nasir Kemper tries to escape the grasp of Noble's Gabe Hudson during Thursday's game. Kemper finished the game with more than 100 rushing yards and a 78-kickoff return for a touchdown as well.

In a game dominated by offense, Thursday’s game between MacArthur and Noble was ultimately sealed by a defensive play, an interception that was the second of the night for a player who wasn’t even playing football a year ago.

With his team leading by 6, the ball in his team’s red zone and less than 30 seconds remaining on the clock, MacArthur cornerback Arzhonte Dallas jumped in front of Colin Fisher’s fade route intended for Trevor Lorenz, ending an exciting District 5A-1 shootout and capping a crucial 46-40 win for MacArthur at Cameron Stadium on Thursday night.

It was Dallas’ second pick of the game, and the Highlanders’ third interception of Fisher on the night. But other than those plays, it was truly an offensive shootout all night, with the teams leaning heavily on their bread and butter. For Mac, it was a run game that racked up 324 yards and saw three different backs either eclipse or approach the 100-yard mark on the night. Leading the way was junior Isaiah Gray, who was a backup quarterback a year ago. On Thursday, he ran for 108 yards on 18 carries and scored 3 touchdowns.

“It’s important to be able to run the ball and I thought we did that tonight,” MacArthur head coach Brett Manning said. “I think we’re a good running team and I hoped to establish the run.”

For Noble, it was the passing game that was seemingly impossible for Mac to stop for most of the night. Colin Fisher threw for 401 yards and had eight completions of 20 or more yards, including two 60-yarders.

But buoyed by two first-half interceptions of Fisher, MacArthur was seemingly in control heading into halftime. able to take a 27-12 lead at halftime. Devin Bush opened the scoring with a 5-yard touchdown plunge. After Noble answered to cut the lead to 7-6, Nasir Kemper received the ensuing kickoff at the 22 yard line, escaped what appeared to be a surefire tackle, then ran through the Noble kick coverage team as no fewer than 6 Bears got a hand on Kemper, who never-the-less took the return 78 yards to the house.

A recent commit to North Texas, Kemper also had a fine night on the ground, running for 102 yards, with his stats helped tremendously by a zig-zagging, 59-yard TD run in the third quarter to put the Highlanders up 9.

But mistakes prevented Mac from putting the game away. Up by a point early in the 4th quarter, the Highlanders drove down to the Noble 1-yard-line. But Montez Edwards was not only stopped, but fumbled, giving the Bears the ball. And thanks to two long gains and a pass interference penalty, Noble marched down to the Mac 7, before a pass deflection by Gray ended the threat.

Even then, MacArthur wasn’t out of the woods, as Kemper fumbled on the following possession, giving Noble the ball at the Mac 12-yard-line. Four plays later, the Bears punched it in to take a 40-33 lead.

“Obviously, we made a ton of mistakes in the second half, and just kept giving them the ball in various ways. I really wished we would not have played so sloppy in the second half, but when it was time to buckle down, get some stops and go score, we were able to do it.”

A 49-yard TD run by Bush tied it and Gray put Mac ahead for good with 1:05 left. But it was Dallas, who joined the football team this year after helping the Mac basketball team reach the state tournament 2 years in a row, who made the play that ended it.

“We’re glad we have him,” Manning said.