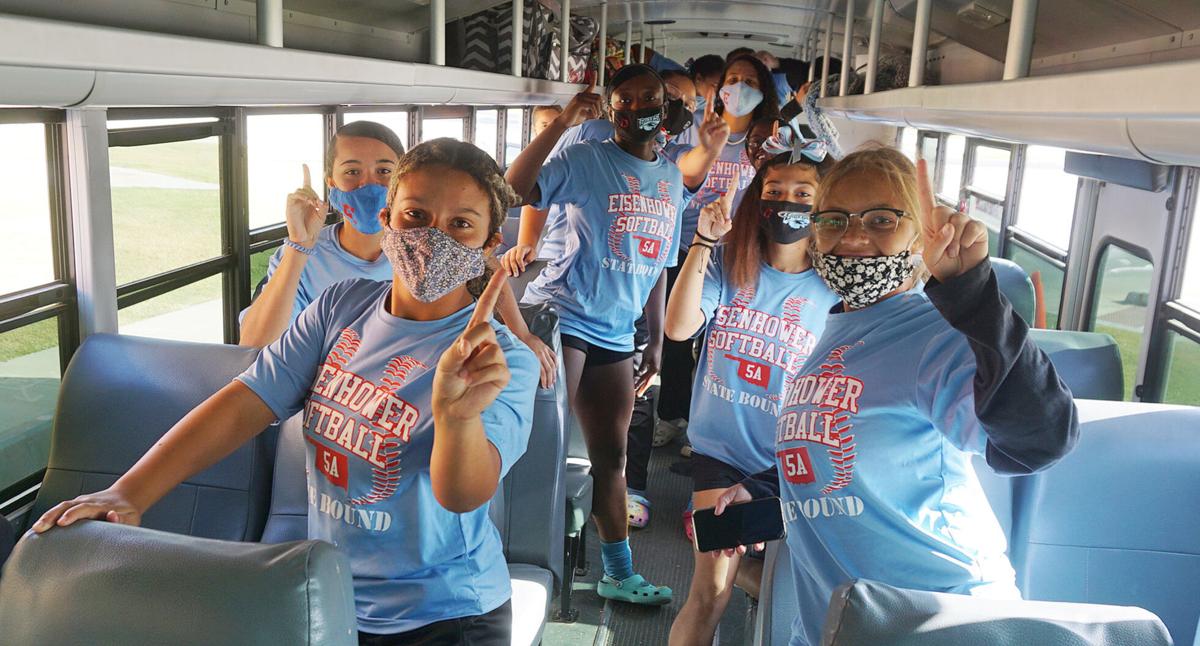 Members of the Eisenhower softball team head out to Oklahoma City for the state tournament on Thursday. Ike defeated Durant, 4-3, and advance to the semifinals starting today. 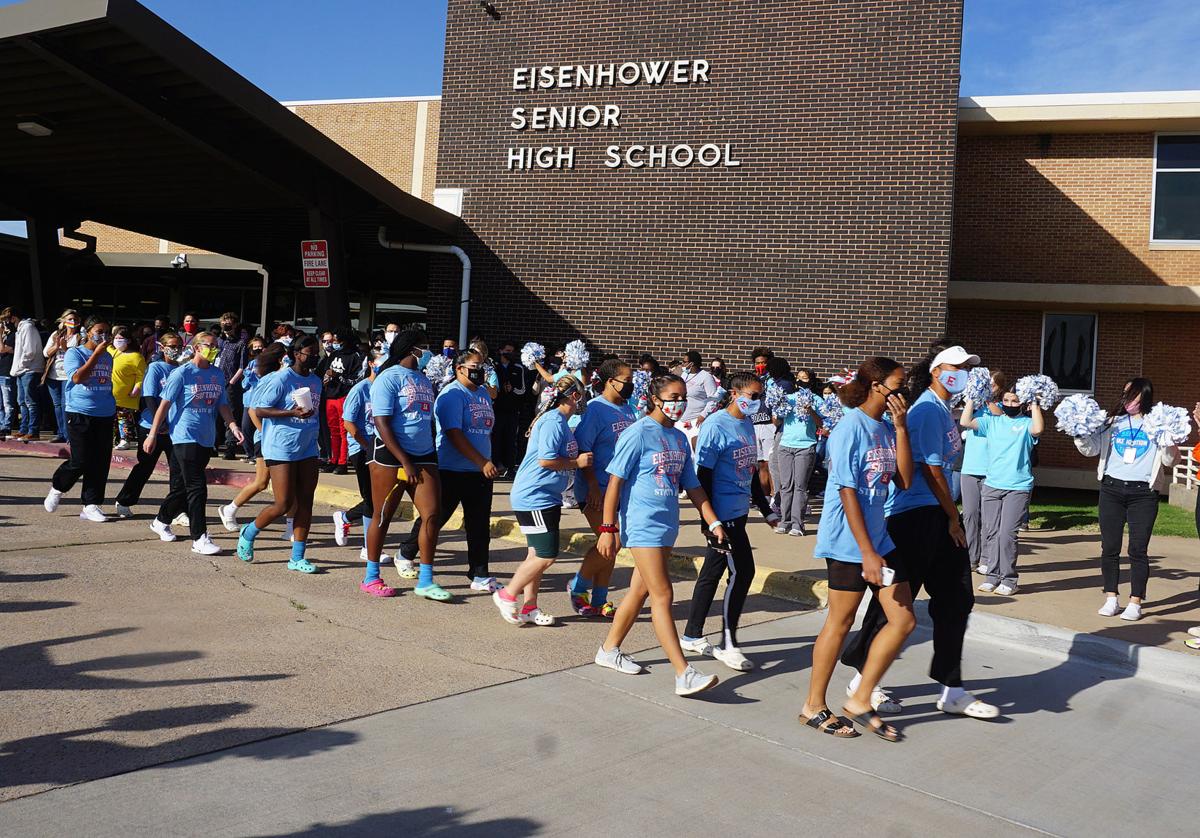 The Eisenhower High School softball team walks through a line of cheering students as they board the bus for the state quarterfinals. 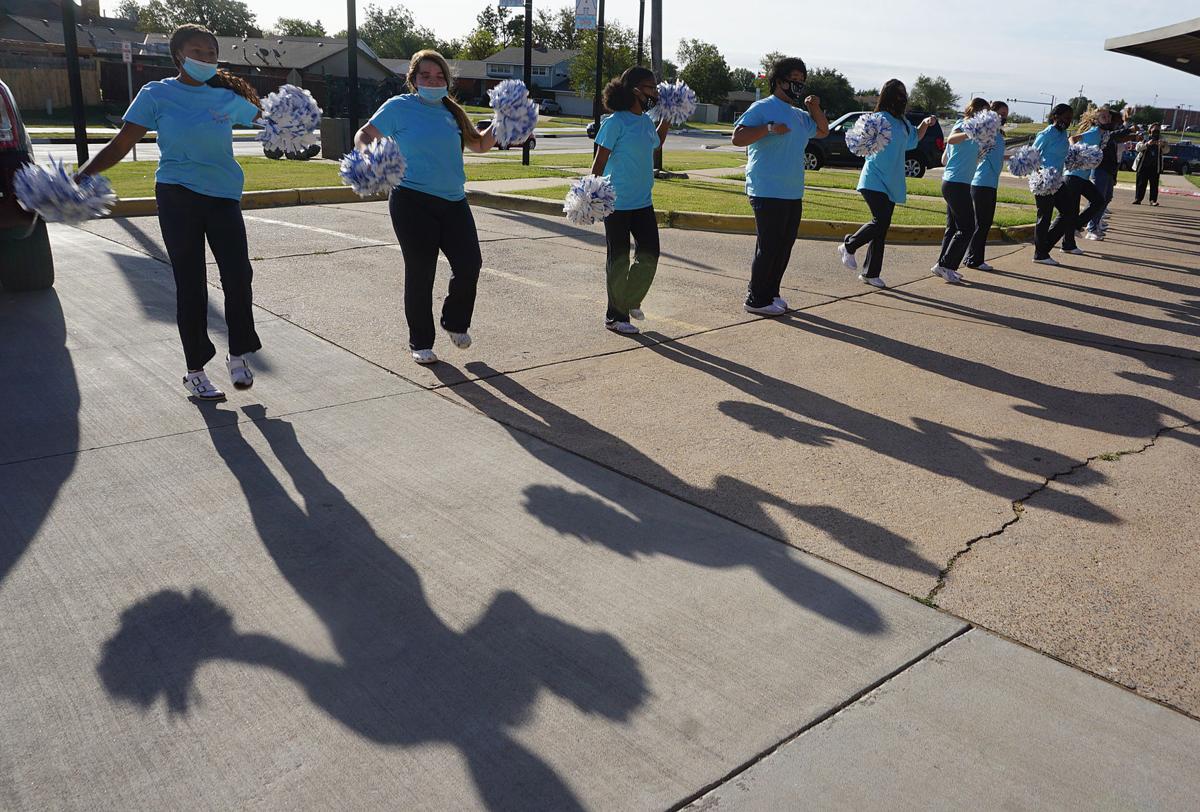 Members of the Eisenhower cheer and drill teams send the softball team off to the state tournament on Thursday.

Members of the Eisenhower softball team head out to Oklahoma City for the state tournament on Thursday. Ike defeated Durant, 4-3, and advance to the semifinals starting today.

The Eisenhower High School softball team walks through a line of cheering students as they board the bus for the state quarterfinals.

Members of the Eisenhower cheer and drill teams send the softball team off to the state tournament on Thursday.

OKLAHOMA CITY—Jennaye Williams may be a sophomore but she showed maturity seldom seen in an underclassman Thursday, driving in two runs and pitching a five-hitter to lead Eisenhower to a 4-3 victory over Durant in the first round of the Class 5A State Fastpitch Tournament.

Leading up to Ike’s first state tournament in history, much was being made about the young Ike lineup and how the Eagles might react under the pressure that comes with being on the big stage.

What was missed in that leadup hype, though, was that one of the three seniors on the team is about as good as they come and Thursday Jamiya Morgan proved her value by ripping three hits and making several huge defensive plays.

The Eagles return this morning at 11 a.m. to face No. 1-ranked Coweta on Field No. 3 at the Hall of Fame Complex in northeast Oklahoma City. Coweta beat Del City, 4-1, in Thursday’s first game.

“I thought that Jamiya had a huge game for us,” head coach Terry Brierton said. “She goes 3-for-4 at the plate and makes some huge defensive plays for us that saved runs. She came up big for us.”

The Eagles won on a day where Williams wasn’t as sharp as she’s been at times but she got the job done.

“I thought JJ did a good job getting outs when she wasn’t at her best,” Brierton said. “The wind was making it tough so we just stuck pretty much with the rise and drop. She didn’t have her best stuff but she still found a way to battle with them and make good pitches when she most needed them. And the defense really helped her out.”

Williams walked two in the bottom of the first but Williams grabbed a ground ball and turned it into a double play to end that inning.

Williams issued two more walked in the bottom of the second but catcher Aamiyah Roberson fielded a bunt in front of home and threw out a runner heading to second for a big out and Williams got the third out with a strikeout.

The third and fourth innings had some excitement but neither team could get a run home even though both had good chances at breaking the drought. Morgan singled and stole second in the top of the third but the next two Eagles struck out.

In the bottom of the third Williams gave up a leadoff single but she got the next batter to hit a weak dribbler back to her in the circle, Morgan made another good play on a ball hit up the middle and Willliams got the last out on a strikeout.

Williams got Ike going with a one-out single in the top of the fourth and Hailey Isom reached base when her ground ball was thrown high at first. But the next two Eagles went down swinging and the Lions went down in order to wrap up the first four innings with still no runs on the board.

But, the fifth proved to be Ike’s inning as the Eagles scored four runs to take command.

“I think we got to see her twice and when we started getting that third look our girls started to get a better feeling about what to expect and we made some good swings,” Brierton said.

Kaya Horton started the inning by earning a walk and Morgan put down a good bunt that turned into a single. Durant got a strikeout but Kennedy Huskey got an infield hit to load the bases.

Senior Mikayla Hall earned a bases-loaded walk for an easy RBI and Morgan raced home on a wild pitch. Williams then really aided her own cause, ripping a double to the gap in right-center, bring home two more runs for a 4-0 lead.

With the large Ike crowd bringing out the cowbells, Durant failed to score after a leadoff single as Williams fanned two straight as she seemed to get stronger as the win came within sight.

She was right back in the circle in the bottom of the sixth, getting a quick out on a nice grab by Isom at second. But Williams walked the next batter and then hit another to get into a big jam. The Lions got a run home but Morgan fielded a ball nearly behind third to get the second out, then she snagged another grounder near third and was able to dive to the bag on a bang-bang play for the third out.

Ike tried to get some insurance in the top of the seventh as Madison Dutil and Huskey hit singles to open the inning but the Lions were able to escape further damage, leaving the score at 4-1.

Williams had little trouble getting the first two outs in the seventh, one on a ground ball back to the Ike hurler and the second on a strikeout as the Ike fans came to their feet.

But the Lions got a single from Abi Gregory and a double from Hannah Kaler to get their second run. Sawyer Strange followed with another RBI single to cut the Ike lead to just a single run at 4-3. Williams wasted little time, getting the next batter to hit a sharp grounder back to the circle. She missed gloving it for a moment but tucked it away and fired a strike to first to end the game and start the celebration.

“This was a big game for these girls,” Brierton said. “But we’re already thinking about tomorrow. Coach (Jay) Vermillion came up early and scouted Coweta, so we’re going to go back and start planning for that game. I think this thing is wide open. We know they will be tough but we think we’re playing well right now and we have confidence that we can play with anyone.”