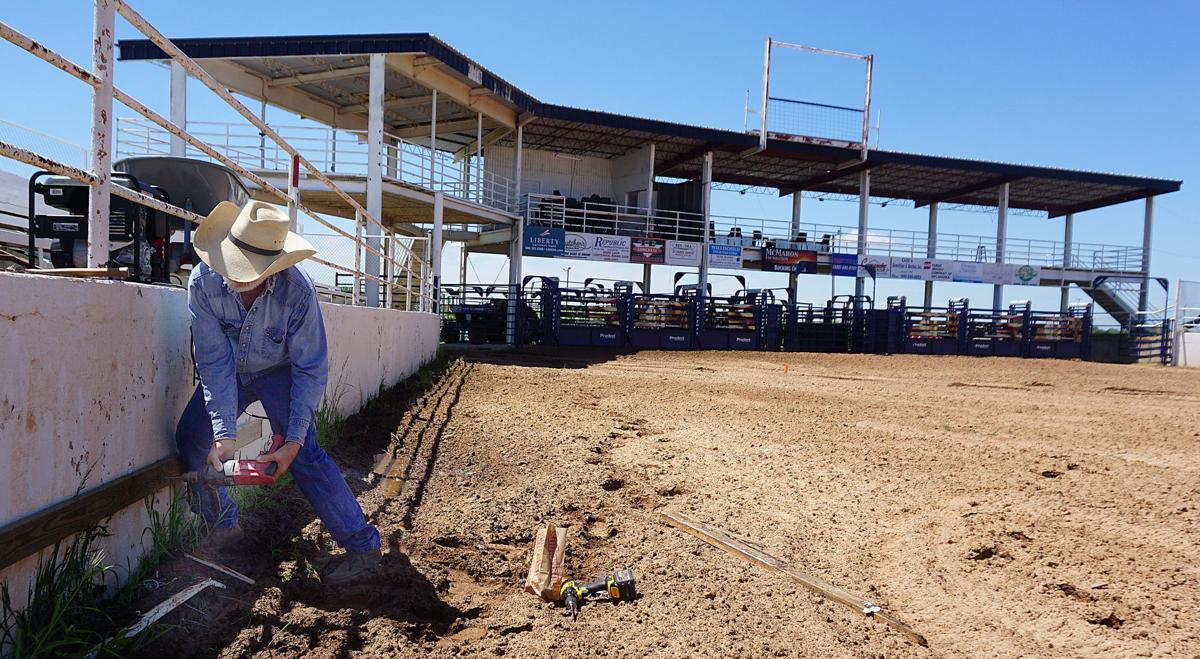 Roy Phillips, a member of the Lawton Rangers, repairs a step up on the insides of the LO Ranch Arena before the start of the annual Lawton Rangers Rodeo, which starts this week. 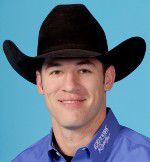 Hunter Herrin has always loved sports. And whether it was as a talented basketball shooting guard at Apache High or as a professional tie-down roper, he’s always loved getting to take that last shot.

On Saturday, he will get that chance when he competes in the final performance of the 82nd Annual Lawton Rangers Rodeo with a possible berth in the Wrangler National Finals Rodeo on the line.

The Rangers Rodeo will “officially” open on Wednesday and run for four nights at the LO Ranch Arena, just east of Lawton. Performances begin at 7:30 p.m. each night.

Tickets for the 82nd Annual Lawton Rangers Rodeo are available at several local businesses and fans are urged to purchase advance tickets to save money and enjoy one of the nation’s biggest professional rodeos.

Of course, it all begins Wednesday with the $5 car-load Special where an entire family can attend for that one low price.

Advance tickets for the other three nights can be purchased at any EZ-GO Store, Crutcher’s for the West, Atwood’s and from any Lawton Ranger.

And to make that night even more special, Sterling’s Chauk Dees, who won the 2019 Rangers Rodeo bull riding title with an amazing 91.5 aboard National Finals bull Shootin Stars as the last rider out of the chutes, will make his ride before what is expected to be a big crowd.

Herrin is staking his claim as the comeback story of the year in the PRCA. After missing almost three seasons and enduring two hip surgeries, Herrin is back competing in the tie-down roping and he’s climbed to 19th in the world standings after winning Prescott (Ariz.) and Weatherford (Texas) rodeos in the past three weeks.

Herrin has competed in the Finals nine times, missing the title by a mere $1,200 in 2008 when Stran Smith edged him during the final performance.

Herrin’s success has come aboard Rambo, a horse he rode before the injury and had plenty of success aboard. This year he got the opportunity to haul Rambo again and it’s paying off.

“Rambo always gives me a lot of confidence,” Herrin said. “The hip is feeling better all the time. The doctors told me it would take a year to really heal and in June we passed that point and it’s sure making a difference. The other thing is I’ve been drawing good calves.”

Herrin has had some great success on Saturday night at past Rangers Rodeos, including one of the most amazing runs in Rangers Rodeo history on Aug. 8, 2005, in a muddy LO Ranch Arena.

The legendary Trevor Brazile had made his run two days earlier, on a dry surface, posting a time of 7.6. Most everyone thought when the rain hit right before the final performance that Herrin and others like Cody Ohl, Clint Cooper and Jerome Schneeberger would struggle and most of them did.

Seven straight ropers failed to post a qualified run before Herrin backed into the roping chute at the north end of the stadium, surrounded by many family and friends from Southwest Oklahoma.

He got a great jump out of the chute, roped and tied his calf in 7.6 to share first with Brazile. He wound up winning $4,360.67 for that effort and it helped him complete another trip to the National Finals Rodeo.

“Yes, I’ve had some really good runs there in Lawton and several of them came on Saturday, so I’m excited about that opportunity,” he said. “I kinda like it where I know exactly what I have to do to win. It’s been good to me in the past and I hope it will be again this year.”

His other Saturday success stories came in 2011 when he posted an 8.3 on the final night to claim a share of third, and in 2015 Herrin was the next-to-last cowboy when he roped and tied his calf in 8.4 to jump into second and pocket more than $4,100 en route to another National Finals Rodeo.

Herrin knows the importance of this next couple of weeks.

“We had Phillipsburg and Dodge City this past week and now we have a bunch of big one-headers coming next week including Lawton,” Herrin said. “It’s going to be important for all of us with so few rodeos left.

“That’s why you are seeing rodeos that normally draw 70 ropers with more than a 100 this year. You just have to work as many as you can because of the cancellations.”

Herrin said the COVID-19 pandemic is definitely serious but he’s seeing big crowds at most rodeos.

“I think it’s become a thing where people are just tired of staying home and they want to get on with their lives and do the things they enjoy,” he said. “We’ve seen big crowds everywhere we’ve been. In South Dakota everything seemed normal but people still need to be careful.”

Lawton has drawn six reigning world champions and 94 qualifiers from the 2019 Wrangler National Finals Rodeo and the added money of $10,000 per event is why Lawton set a record this year with 710 entries, including a host of former world champions. In addition to the added money, 95 percent of the entry fees goes into the purse, which could reach the $200,000 mark if all those who entered show up and compete.

At the top of the list of returning world champions entered in Lawton is Sage Kimzey, the six-time PRCA bull riding world champion who will make his ride on Friday. He is one of 13 contestants who competed in the National Finals bull riding last December and there are ranked bull riders scheduled during each of the four performances at the LO Ranch this year.

Zeke Thurston survived a tough field to win the world title in saddle bronc riding and he will make his appearance in Lawton on opening night. In fact, there are six NFR qualifiers from 2019 scheduled to compete in the saddle bronc riding that night including two from the famed Wright family – Rusty and Spencer.

Defending world champion steer wrestler Ty Erickson is among those competing on Friday, Aug. 7, as well and that performance could see some great times as there are five other NFR qualifiers entered that night.

Former world all-around champion Ryan Jarrett, of Comanche, is making some noise in tie-down roping as well and he will also be competing during the final performance in Lawton. Jarrett has earned more than $35,000 this year and has climbed to seventh in his bid to return to the National Finals.

The reigning world champion calf roper is Haven Meged and he will be one of the top contestants schedule to compete during the “slack” on Tuesday at 4 p.m.

Because of the large number of entries, there is not enough time during the regular performances to get all the contestant into the arena, so the PRCA computers pick out certain contestants to compete in the slack.

Fans are invited to watch the slack free and that will include barrel racing, steer wrestling, team roping and tie-down roping. There will be additional slack in the barrel racing at 8 a.m. Thursday.