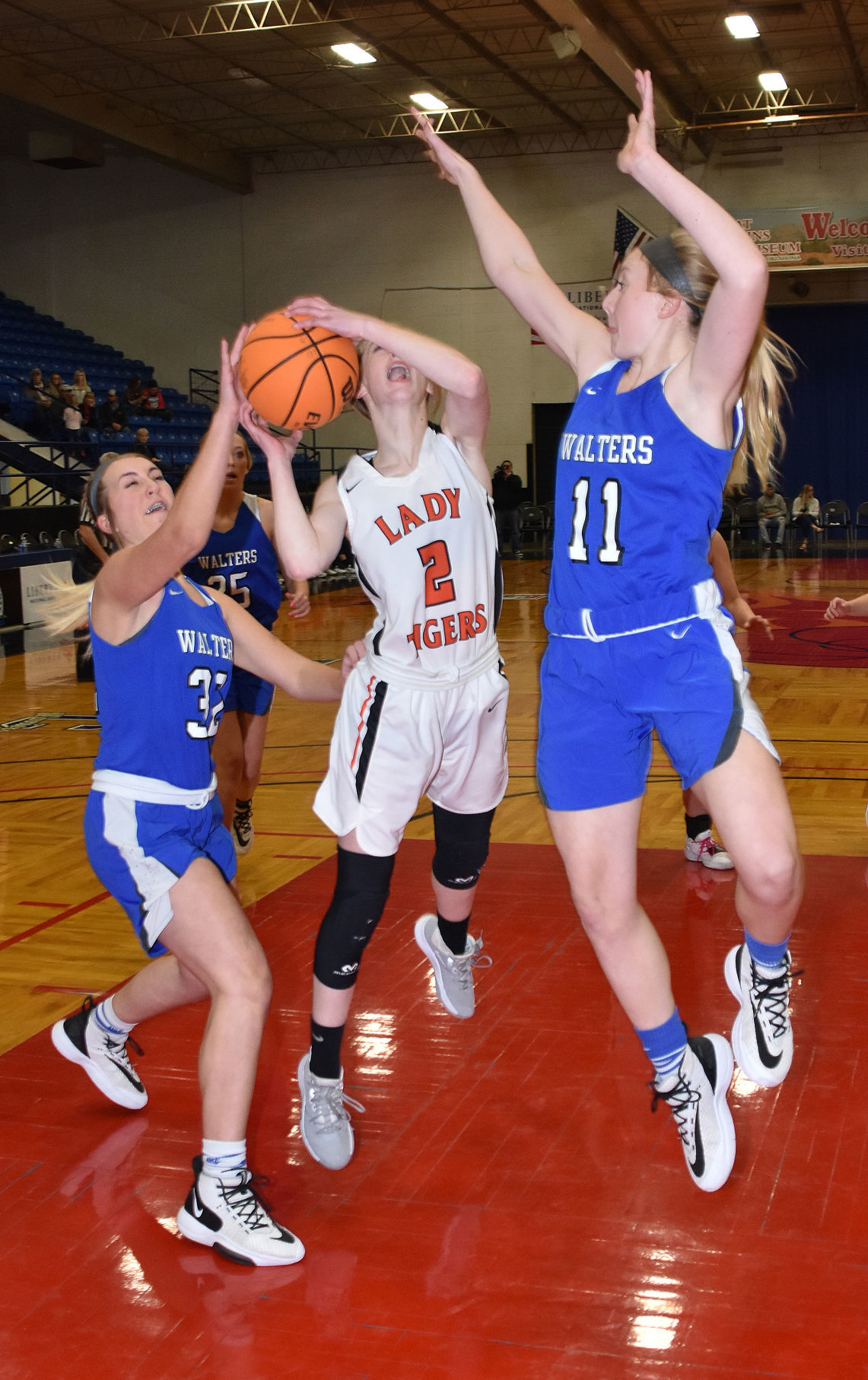 Sterling guard Emma Nunley drives between Walters’ Emily Robinson, left, and Trista Ford during the semifinals of the Comanche County Tournament on Thursday. 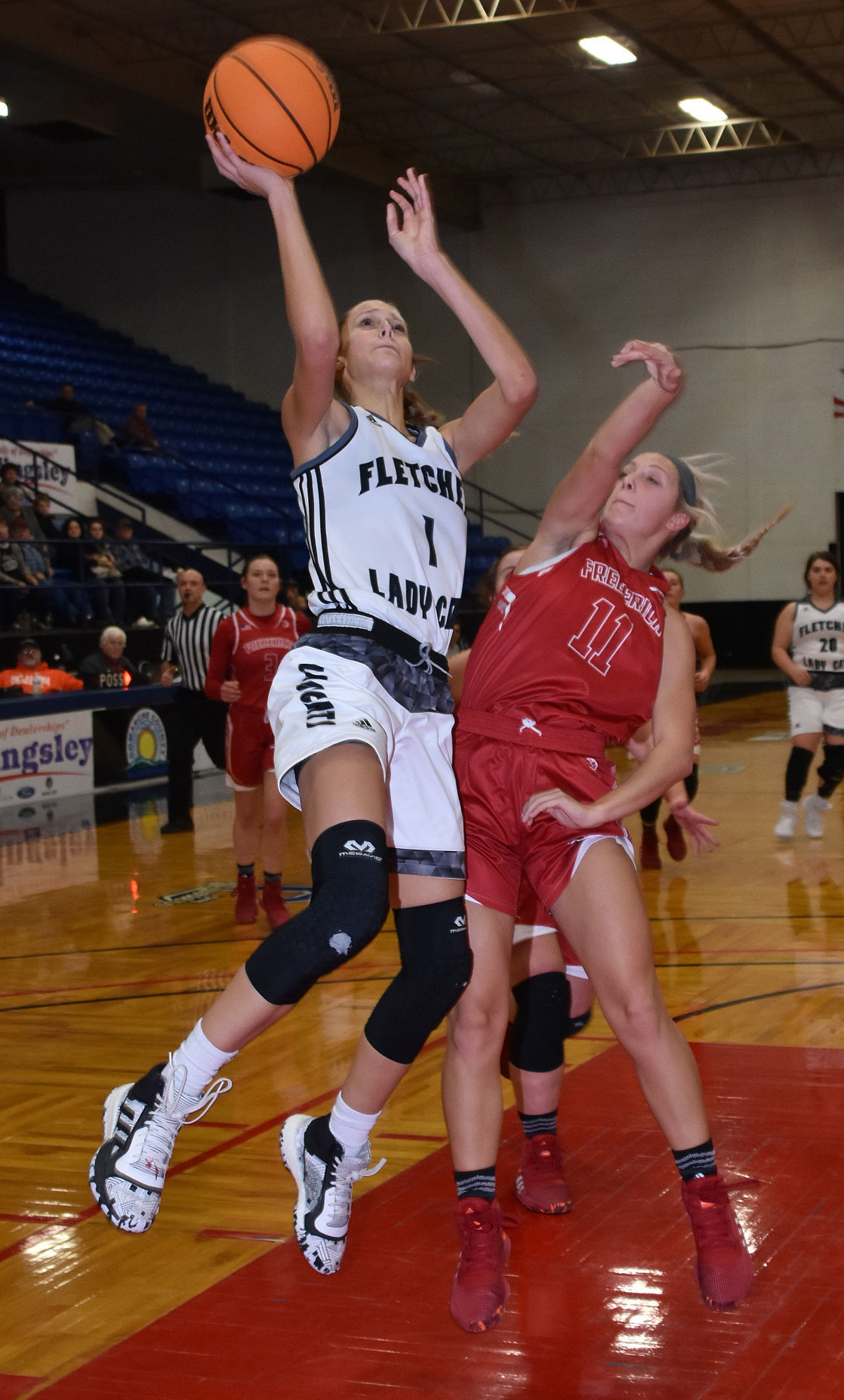 Sterling guard Emma Nunley drives between Walters’ Emily Robinson, left, and Trista Ford during the semifinals of the Comanche County Tournament on Thursday.

There will be no threepeat for Fletcher girls but there could be the start of a winning streak for Frederick after the young, quick Bombers beat the defending champion Wildcats, 58-48, to advance to Saturday’s championship game in the Comanche County Tournament.

The Wildcats had earned titles in 2018 and 2019 and with talented Jordyn Bloomfield returning, they wound up being the top seed while the Bombers came in as the fourth seed.

Throw out those seedings, though, because on this night the Bombers were just better.

“I thought our quickness was the difference, especially there on the press,” Frederick coach Terry Collins said. “Our girls just got to their spots and were able to force some things. Like I told them, it’s not about forcing turnovers, it’s about speeding them up and making them take bad shots.”

The opponent for Saturday’s title game will be Sterling, which edged Walters, 23-19. That title game starts at 6:30 p.m. at the Great Plains Coliseum.

That means that Geronimo and Big Pasture will meet in the girls consolation game at 11 a.m., then Fletcher and Walters tangle for third at 2 p.m.

Tonight the boys schedule will be determined with two consolation games, then the semifinals. Walters and Indiahoma boys start the schedule at 4:30, then Sterling faces Geronimo at 5:50.

The semifinals feature Big Pasture and Fletcher at 7:10 and then Chattanooga and Frderick at 8:30.

Oddly enough the Bombers had won just eight games coming in but that might be expected with a team loaded with underclassmen.

There are just two seniors who play and they produced just five of the Bombers’ points last night.

The quickness evident from the outset.

“Frederick had the gold medal 400 relay last spring and I keep telling the girls to try and make it impossible for people to understand just which four were on that unit,” the veteran coach with years of Texas experience said with a big grin.

His opposing coach, Fletcher’s Kyle Williams knew it would be a challenge after seeing the Bombers play Monday.

“They were just more athletic,” Williams said. “They forced us to rush things in the first half and that really forced us to scramble them rest of the way. We had some other things that killed mus, like rebounding.

“Twice there late we foul them and they miss the front end of a 1-and-1 and get their own rebound. We score on those two and it’s a one possession game. But that’s what happens when you don’t react quick enough. They just beat us to those rebounds.”

The score entering that key sequence was 50-43 and when the Bombers got both those key rebounds, the clock was down to 1:39 and the Wildcats were in trouble.

Frederick did a good job slowing down Bloomfield as she was hounded most of the night but was still able to score 18 points, including hitting four threes. However, she missed most of her late threes as the pressure of guarding Frederick freshman Danni McClung showed on the face of the talented senior.

McClung wound up with 18 herself to share scoring honors with teammate Jenna Thornton.

“Jenna really had a good game,” Coach Collins said. “She just is always there when you need her. She’s really dependable.”

Deuna Miller, a cat-quick junior guard, and McClung both spent time guarding Bloomfield and while she drilled three early treys, she hit just 1 of 5 down the stretch.

This one was a tussle from the first whistle but it was physical and neither team could get much offense going.

Both teams had their chances late but Walters was unable to convert from close range and after missing the shot, a foul was called sending Aubree Smith to the foul line with 24 seconds left and she made both to arrange a 23-19 lead that iced it away.

Walters tried a late trey but it missed, but Sterling was unable to convert at the other end and Walters had just 1.5 seconds left when it finally got the rebound after the free throw miss.

“Give credit to Walters, Coach (Clint) Meason did a great job with their defense,” Sterling coach Darrell Stanley said. “That sat back in that zone and still did a good job of keeping our shooters from getting any room.

“We needed to do a better job of penetrating and kicking it out but they were right with us most of the time. We just had to fight for everything we got tonight.”

Smith only scored two points but her late free throws were huge. Emma Nunley led Sterling with 10 but she was the only Tiger to reach double figures. Sister Jaydn was smothered most of the night and scored just one free throw as the Blue Devils made sure she didn’t get open allo night for a trey after hitting four in the first round.

In this game the smallest player on the court, Elizabeth McCarthy of Geronimo, sparked the Blue Jays by hitting four treys en route to a 21-point outburst that almost topped the entire Indiahoma total.

The Jays were up 15-3 after one quarter and then pushed the lead to 17 at 30-13, at halftime and after that the outcome was never in doubt.

McCarthy was one of nine Blue Jays to score but none of the other eight scored more than six.

Indiahoma was plagued again by poor shooting as the Warriors missed a large number of point-blank attempts and also hit just 8 of 19 free throws, also a sup-par effort that kept them from getting any closer.

This was a game without a lot of flow but plenty of scrappy play on both sides.

It was obvious that playing in the consolation bracket was not exactly what the No. 2 seeded Lady Rangers wanted but when the chips were down they made some big plays.

The first bucket in the game didn’t come until the 2:36 mark of the first quarter and at the end of that frame Chatty owned a 3-2 margin.

BP bounced back to assume a 10-6 halftime lead and the Rangers missed enough shots to allow Chatty to hang around.

Then the Warriors did just that as Lexi Baggett tossed in a three-pointer with 2:30 left in the game, and when Hannah Givens made a layup after a BP turnover, it was 24-23 BP, forcing Rangers’ coach Trevor Smith to call time.

From there BP used two free throws from Abbey Smith and then two more from Amber Glover sank two more charities with 30 seconds left to arrange the final score.