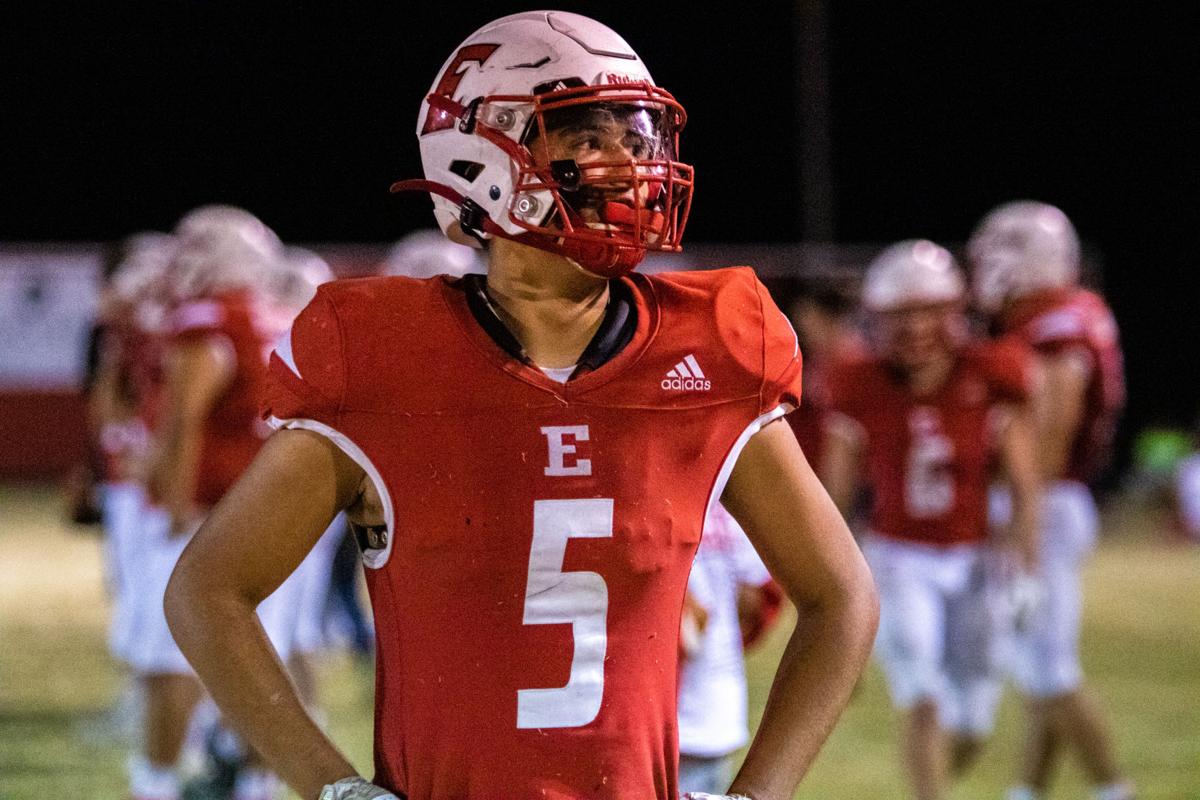 After a 9-1 regular season, Friday night’s playoff loss was a tough pill to swallow for Empire and junior tight end Santos Benitez. 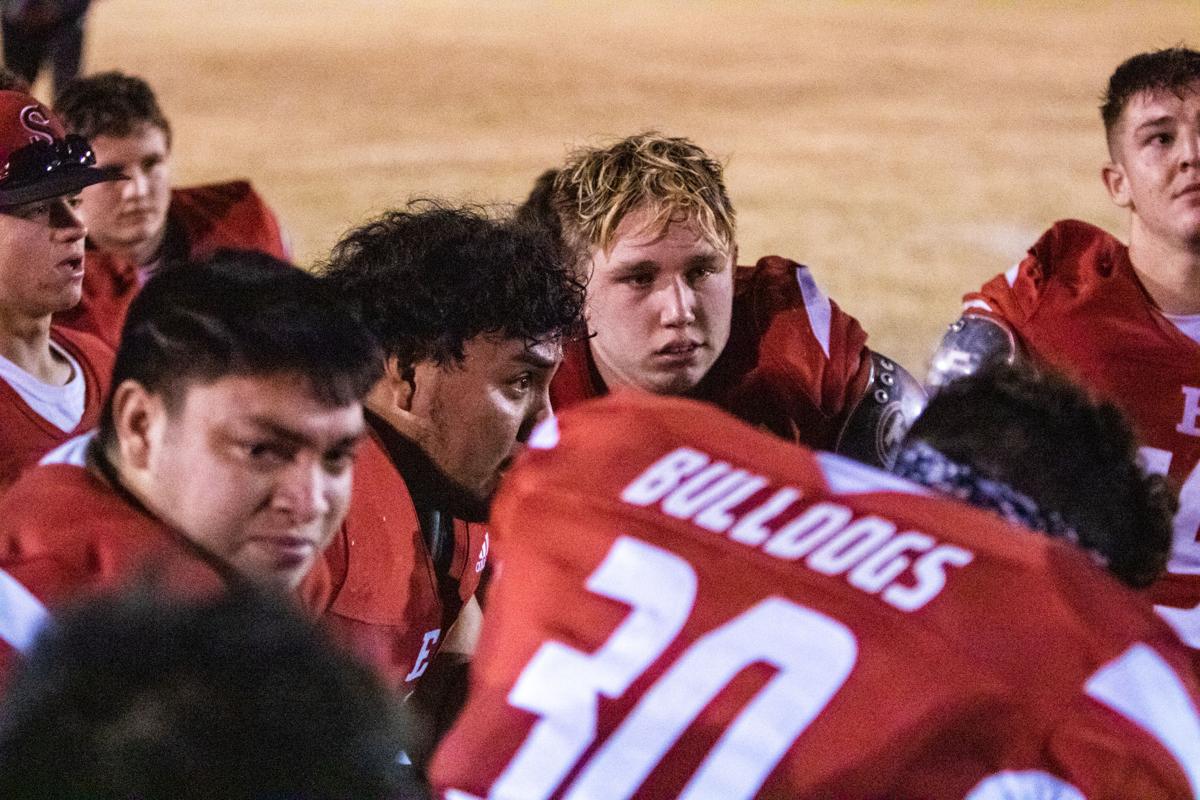 For many Bulldogs, this will be the last postgame huddle of their careers 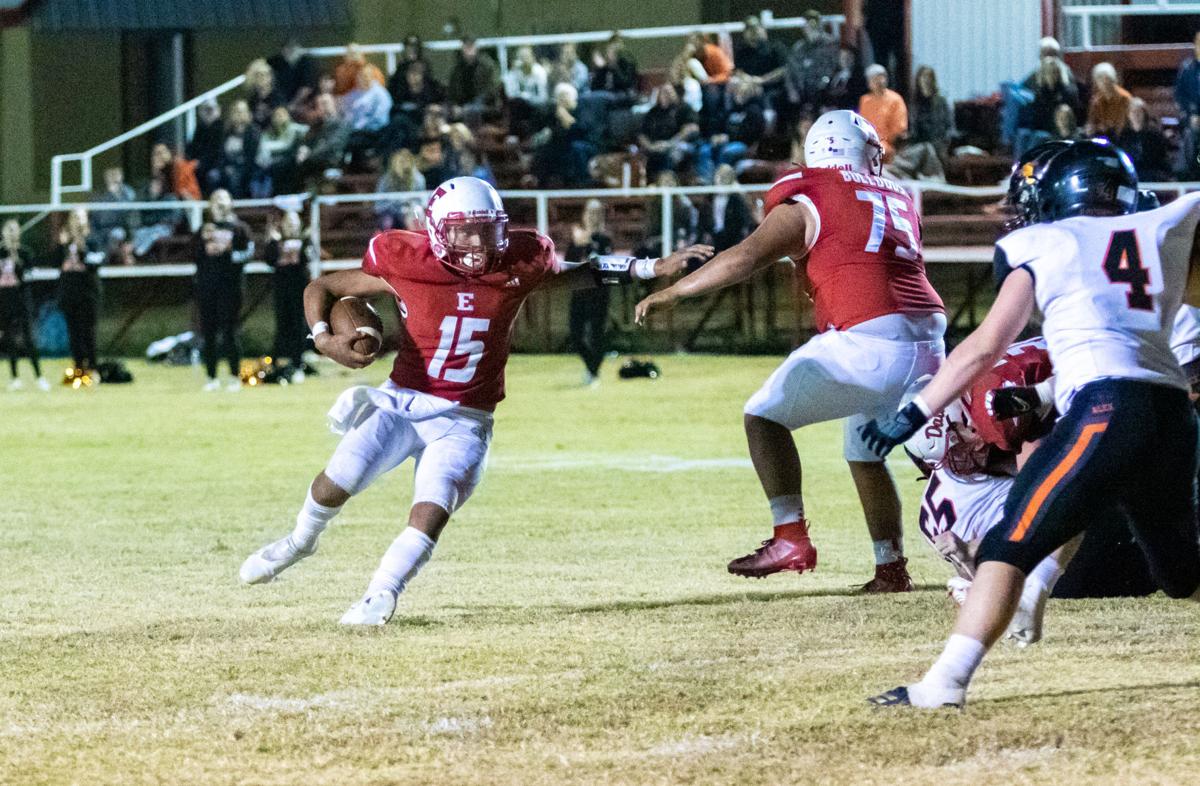 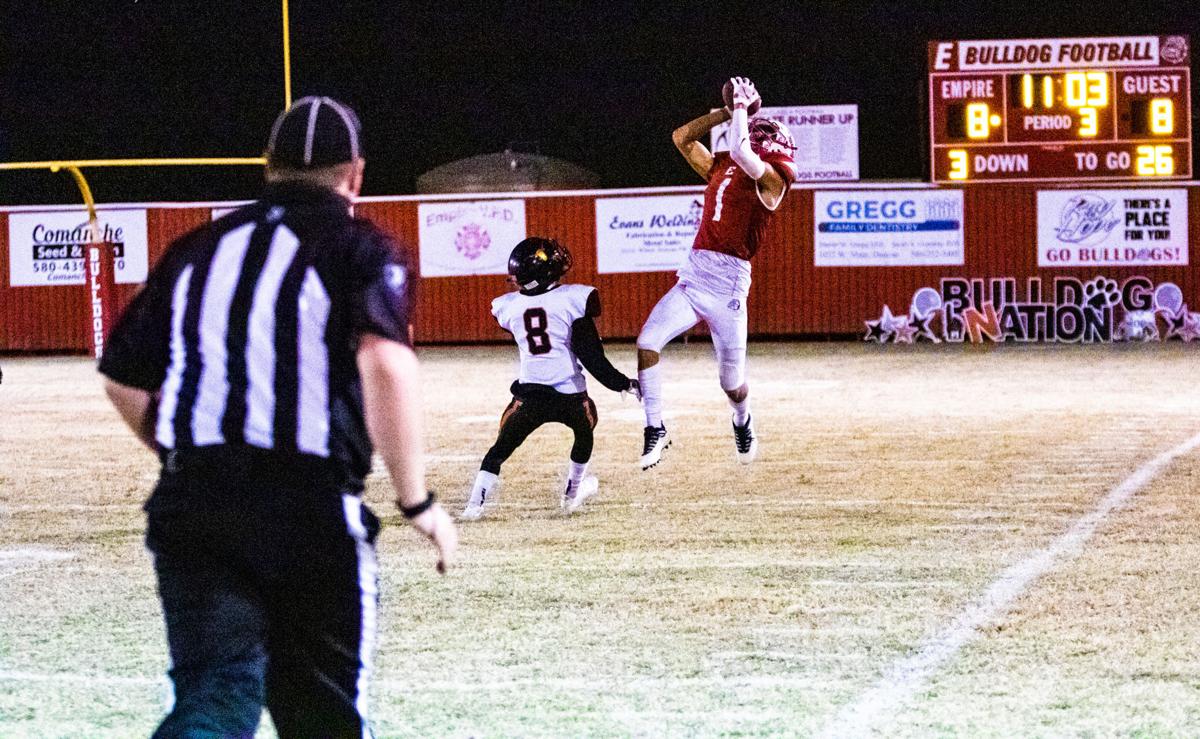 Empire's Daniel Alvarez catches a 35-yard pass from quarterback Mitchell Monteith for a first down. 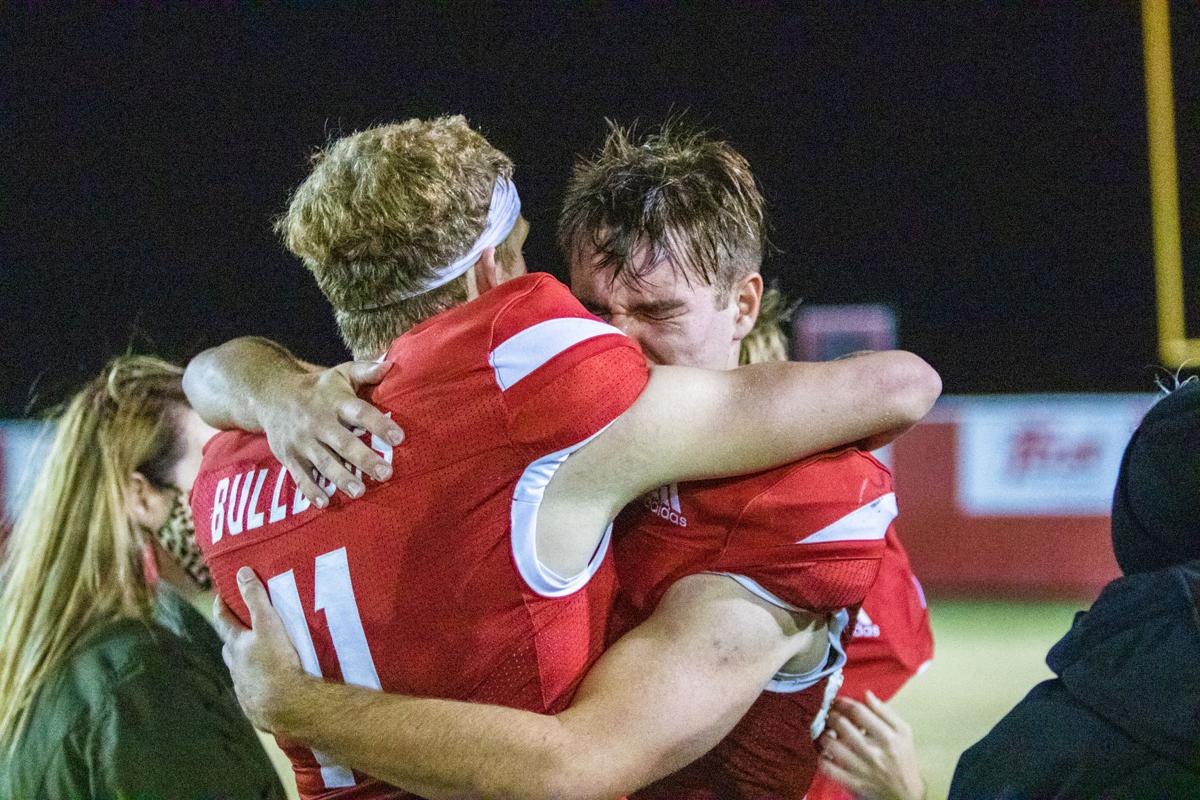 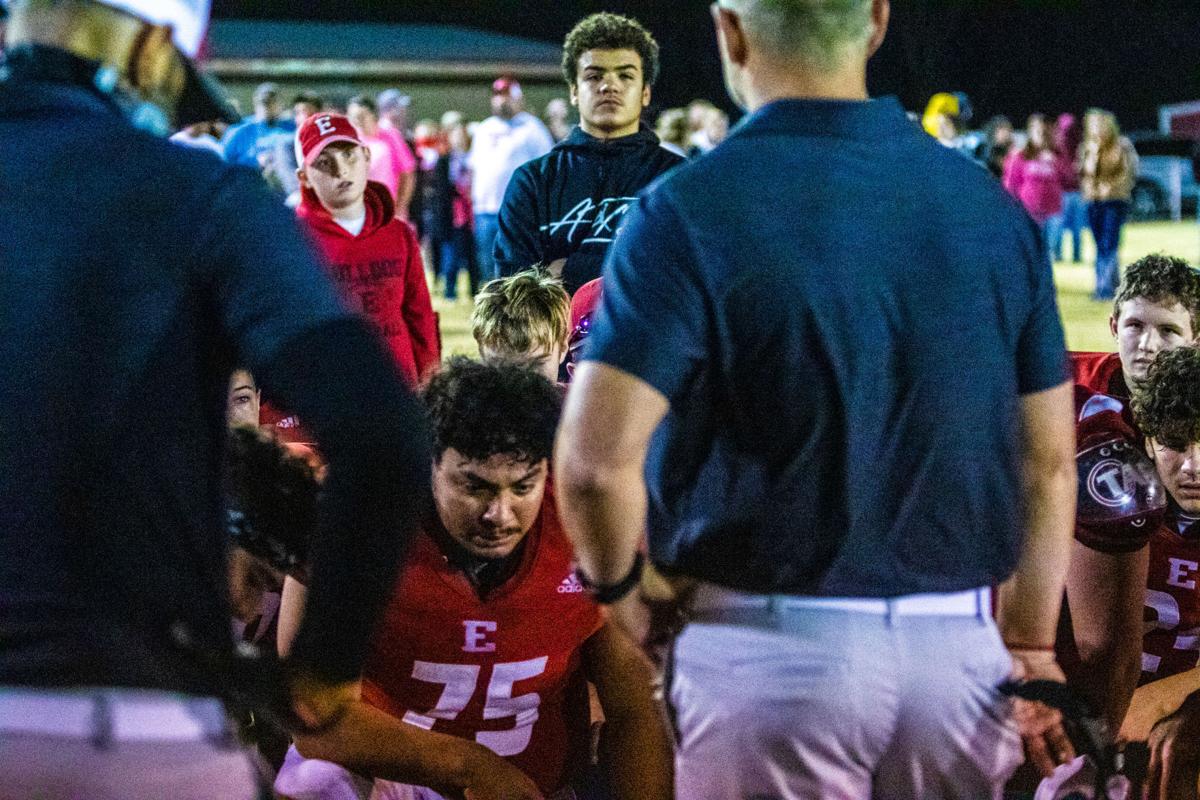 After a 9-1 regular season, Friday night’s playoff loss was a tough pill to swallow for Empire and junior tight end Santos Benitez.

For many Bulldogs, this will be the last postgame huddle of their careers

Empire's Daniel Alvarez catches a 35-yard pass from quarterback Mitchell Monteith for a first down.

EMPIRE — Emotions were high and the tears flowed freely in Empire when the Bulldogs finished their playoff run Friday night, falling to Alex 38-20.

Even with the loss and his team’s historical playoff run cut short, senior quarterback Mitchell Monteith feels the season ended on a high note.

“I feel like we finished on a great note,” Monteith said. “We changed everything. This was the best record for our team in over 30 years and our playoff shirts, they say, ‘legends in the making’ and we feel like we have become legends.”

“It’s real hard.” Monteith said. “Some of us are never going to see another down on any field again. Some of us are going places, but it’s over for a lot of us. It’s going to be really hard, but we have to accept it now.”

In the post-game huddle, Head Coach Brant Hayes made no excuses to his team for their loss. He pointed out their deficiencies during the game and then highlighted how far he has seen the team come since last season, all while holding tears of his own back as he said goodbye to his seniors and encouraged the juniors to follow their example next season.

“Juniors, you’ve seen how hard these seniors worked,” Hayes said. “Now it’s your turn to work that hard. Remember, I love every one of ya, more than you’ll ever know, I promise you.”

The Bulldogs took the lead late in the first when freshman running back Gabe Diaz battled through the Longhorn defense to score a 2-yard touchdown. Then with a pass from Monteith to senior wide receiver Daniel Alvarez for the two point conversion, the team had 8 points on the board with 2:31 left in the first.

Empire maintained that lead going into the second, but with 3:15 gone, Alex scored and took the two point conversion, leaving the game tied through the remainder of the half.

Empire regained their lead early in the third with a 15-yard rush from Diaz, but were unable to get the conversion making the score 8-14. Minutes later, the Longhorns scored a touchdown of their own and with the two-point conversion, pulled ahead for the first time in the game 16-14 Alex.

Empire would not come back and only scored once more, but allowed Alex to score three more runs to end the game 38-20.

“They just hit us early,” Bryant said. “I thought we were prepared but I just didn’t I think maybe they were a little bit faster than what we showed in practice. I think we thought we could just come out and hit them in the mouth and we couldn’t. We didn’t respond like we have all year and it hurt us.”