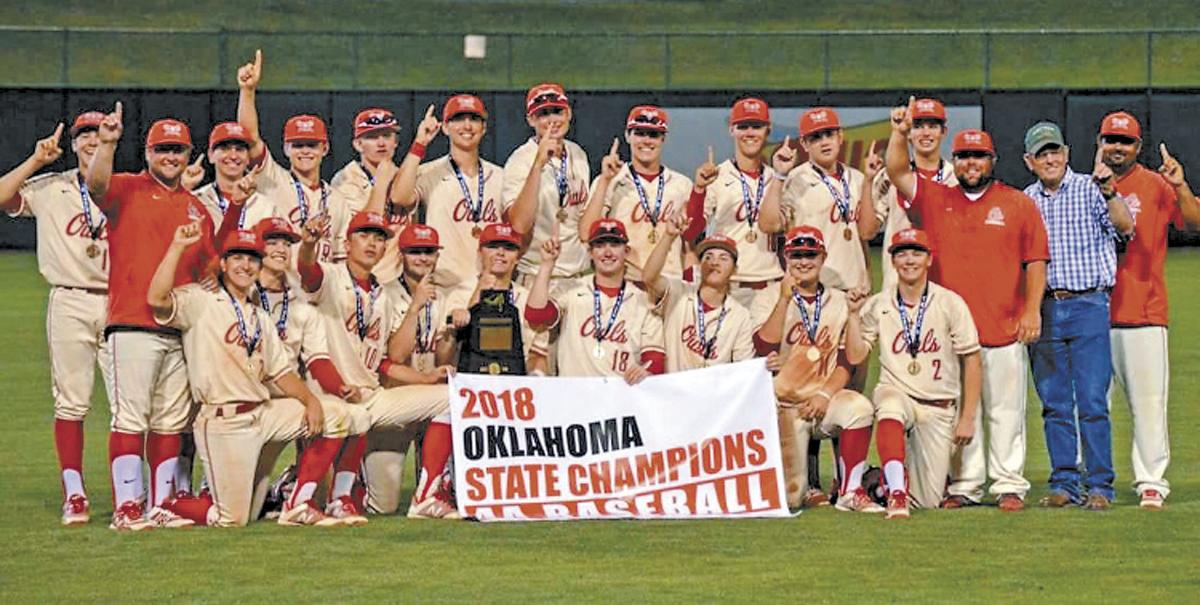 The Elgin Owls beat the odds — and powerhouse Blanchard — to win the 2018 state baseball championship. 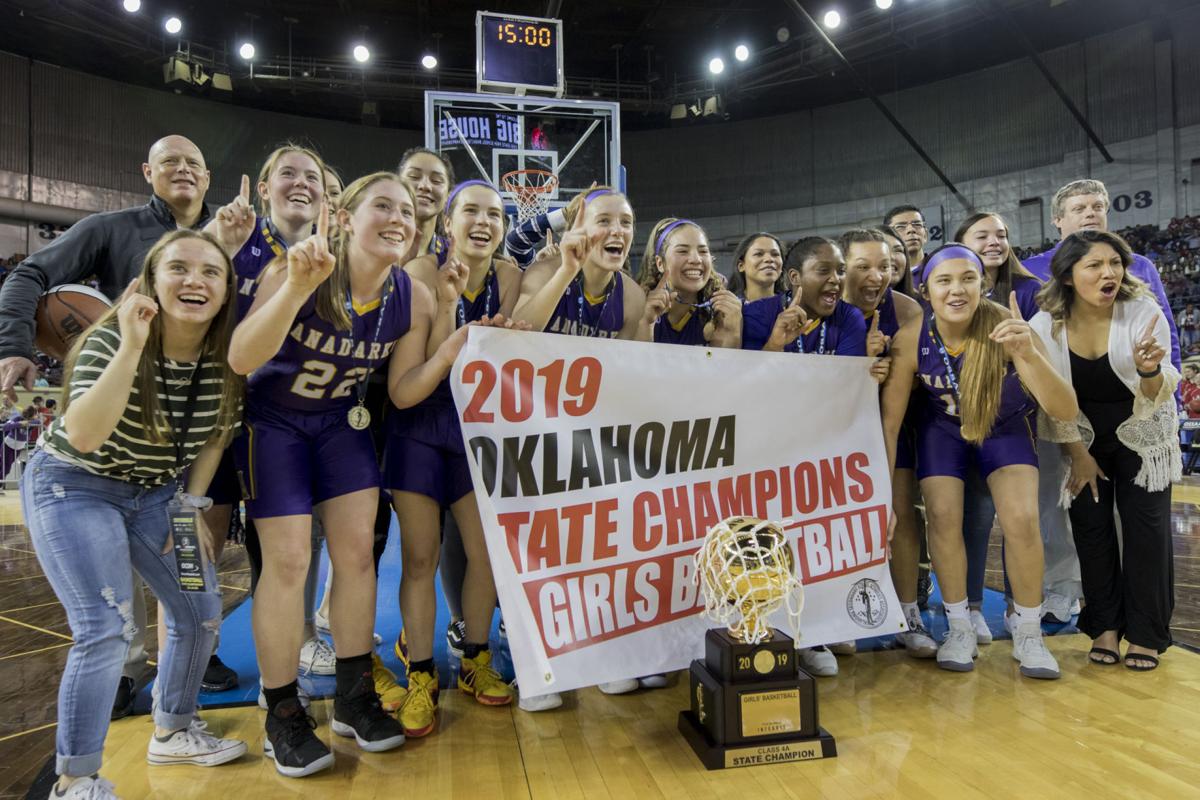 With stifling defense, the Anadarko girls went 26-3 in 2019, winning the program's second championship of the decade. 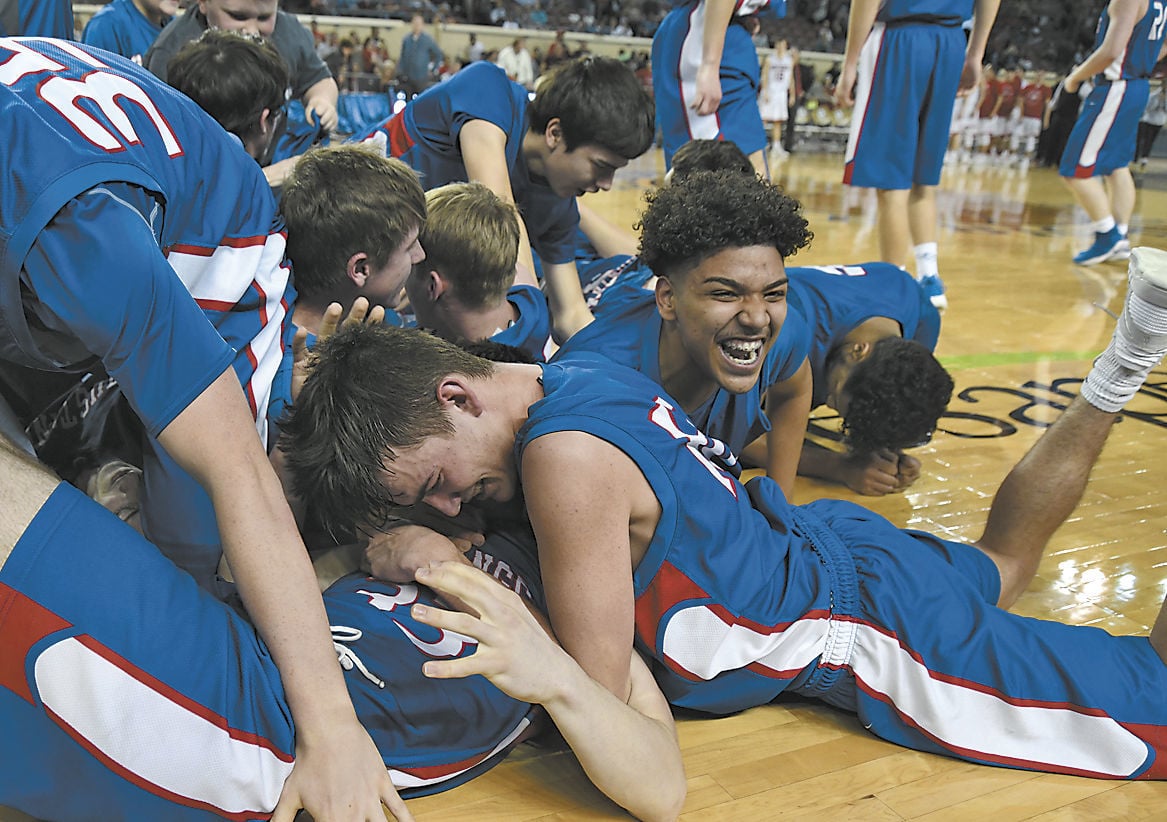 Fort Cobb-Broxton basketball established one of the most powerful dynasties in the entire state, winning four Class A state championships in a row from 2015-18. 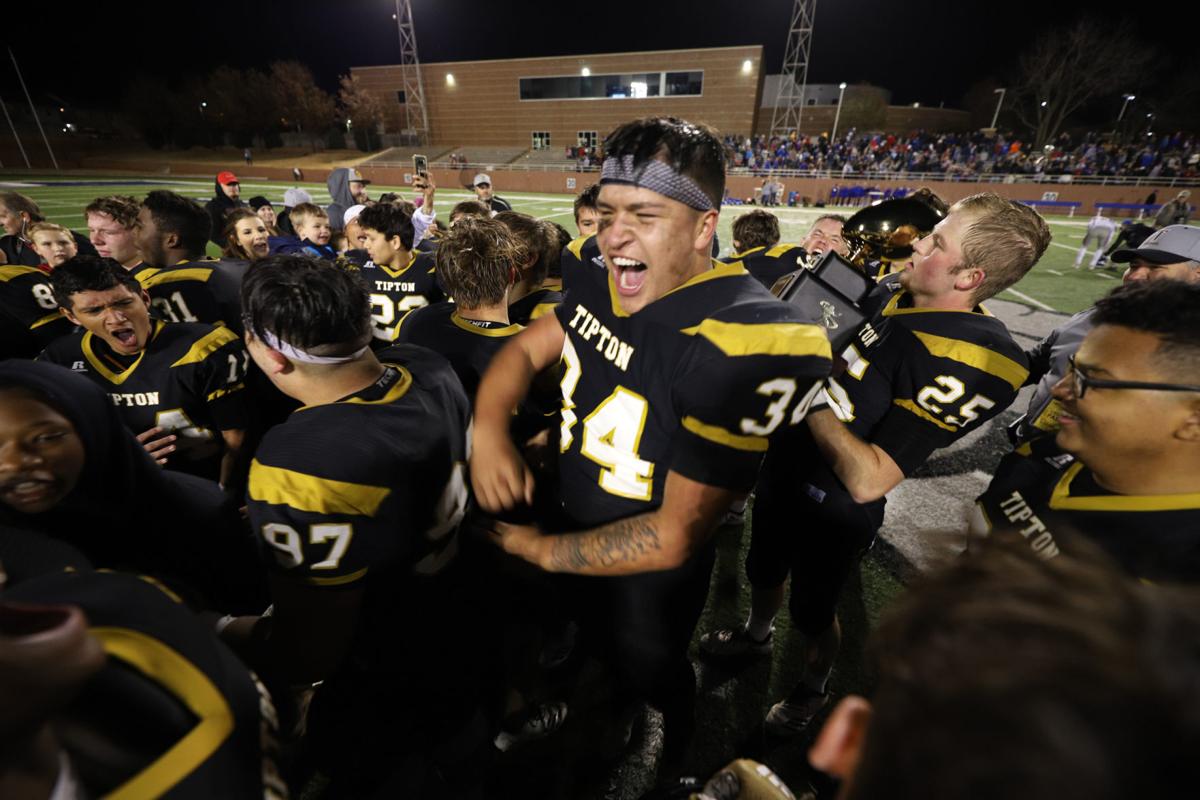 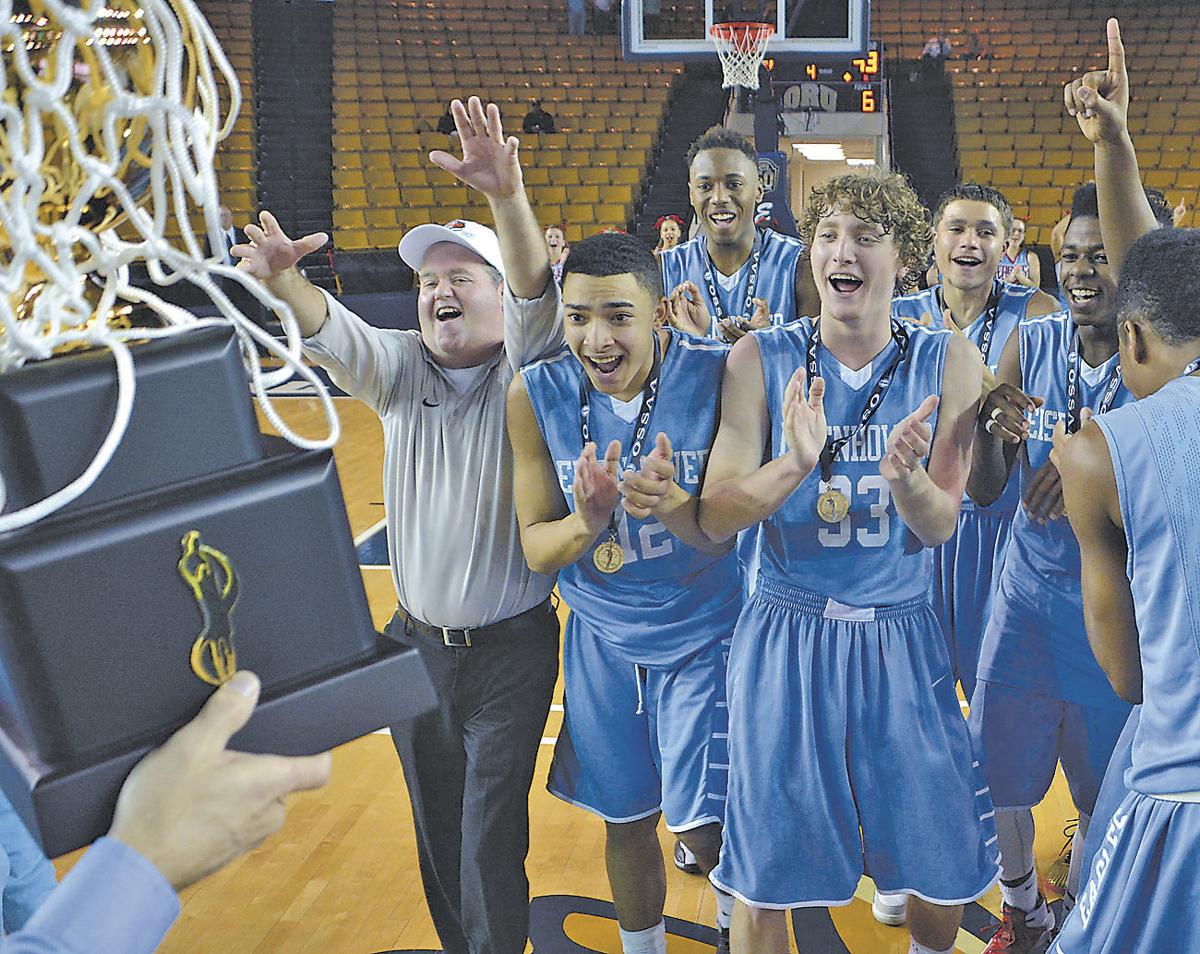 The Eisenhower boys basketball team reached the state tournament seven times in the decade, winning the Class 5A state championship in 2015. 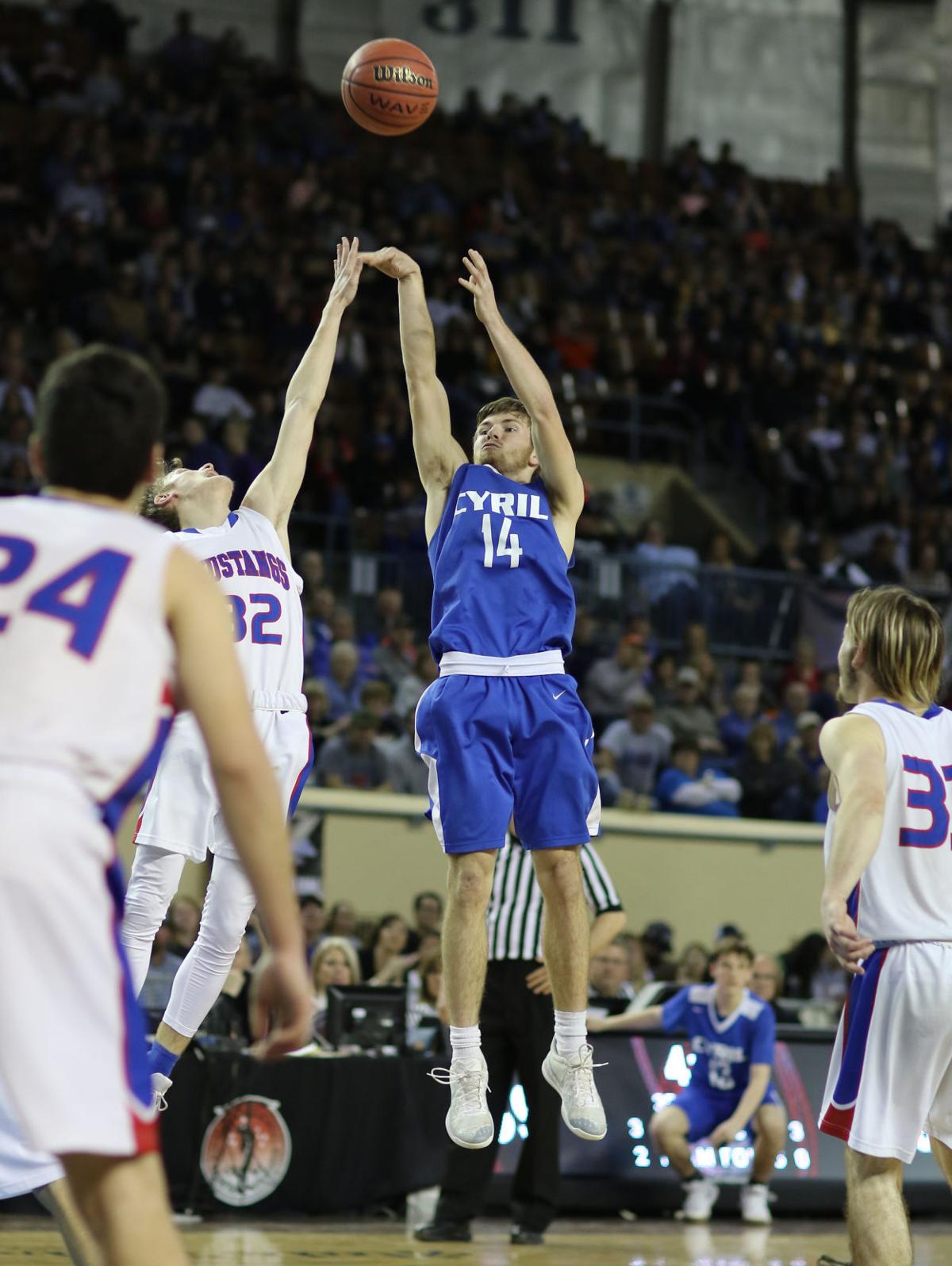 The Elgin Owls beat the odds — and powerhouse Blanchard — to win the 2018 state baseball championship.

With stifling defense, the Anadarko girls went 26-3 in 2019, winning the program's second championship of the decade.

Fort Cobb-Broxton basketball established one of the most powerful dynasties in the entire state, winning four Class A state championships in a row from 2015-18.

The Eisenhower boys basketball team reached the state tournament seven times in the decade, winning the Class 5A state championship in 2015.

As we close out the 2010s, we are looking at some of the most memorable sports moments produced by Southwest Oklahoma schools and athletes. Yesterday, we recapped 2010-2014. Today, we look at the past five years.

After the 6A split, Eisenhower moved down to 5A for the 2014-15 athletic season. And after being ousted in the Class 6A semifinals two of the previous three seasons, Bruce Harrington’s Ike boys basketball team was determined to make amends in 2015. With a mix of experience (Darius Roy, Douglass Moore, Jamey Woods and Bentley Bross) and youth (RJ Fisher, Mookie Douglas and Romio Harvey) and playing a schedule that still largely consisted of 6A powers, the Eagles lost only four games all year, all to 6A teams and all by a total of 18 points. Three of the losses came to ¾ of the Class 6A semifinals, including a five-point loss eventual state champ, unbeaten Mustang.

In their first three playoff games, Ike decimated the competition, winning by an average of 38 points. Upon arriving at the state tournament, the Eagles beat Pryor and Edmond Deer Creek to advance to the championship against a Carl Albert team with no fewer than three future Division 1 players on its roster. In a low-scoring affair, freshman Fisher scored the go-ahead basket with under a minute left. The Titans’ last chances fell short and Eisenhower lifted its first Gold Ball in boys basketball. Just as meaningful, Bruce Harrington won the title that had long eluded his father, Altus legend Clester Harrington.

Speaking of Altus, the Bulldogs enjoyed a nice year in 2015, too. The boys swim team took home a state title, and in the fall, the football team took the community on a magic carpet ride. Under the direction of coach Jeremy Reed and fueled by the running of Taven Birdow, the Bulldogs lost just once and advanced to the state championship game against Collinsville. After a seesaw second half, the game was tied with just seconds left. Reed called on kicker Gabe Barton to boot a 40-yard field goal, which helped Altus lift its first championship trophy in football since 1971.

It was a banner basketball season for the people of Chattanooga, as both the boys and girls made the Class B state tournament. However, their seasons would both end in the quarterfinals, the girls falling to Erick, while the boys were bested by eventual state champion Fort Cobb-Broxton. But as we soon found out, Scott Hines’ team was just getting started.

Call it a year of déjà vu and a little something new.

Again, Altus won the boys swimming championship. Again, Fort Cobb took home the boys basketball title. And once again, the Lawton High football team played Bixby in the state title game, only to be beaten by the Bixby Spartans.

And for the third year running, Bruce Harrington’s Eisenhower team made it to the state tournament, only to be defeated by Tulsa Memorial in the semis. But while things seemed to be going to form, what happened that offseason was anything but everyday stuff. Harrington announced he and his brother Kevin, the head basketball coach at MacArthur, would be stepping down to take jobs at North Side High School in Fort Worth, Texas, a program fresh off a 3-win season. Although the decision seemed strange, the programs were nonetheless left to people the Harringtons trusted, former players-turned-assistants. Marco Gagliardi took over at Mac, leading the Highlanders to the state tournament in his third season.

Meanwhile, at Ike, Todd Millwee kept the Ike train rolling, leading the Eagles to three more state tournaments (extending the streak to six) before leaving for Westmoore in the summer of 2019.

Now I can finally get to talking from personal experience, having joined the Constitution in December 2016. That first basketball season was crazy for many reasons. After years of dominating, Cache and Elgin backed out of the Comanche County Tournament. Meanwhile, in Caddo County, the tournament final between the Fort Cobb boys and Cyril was marred by heated emotions that led to players being separated in the postgame handshake line, fans trying to jump onto the court and the teams’ regular-season matchup being canceled. The teams would play each other in an area round game at Cache in front of an electric crowd. Fort Cobb won, though Cyril would advance to the state tournament through the consolation bracket. However, they were ousted in the quarters, while the Mustangs ¬¬¬— a team that featured three of the top 60 all-time scorers in state history in Greydon Steinmetz and the Hines brothers, Cameron and Kellen ¬— would win its third consecutive title.

Eisenhower boys made it back to state yet again, though they lost to Tulsa Memorial once again. But it was the Ike girls, under head coach Daniel Wall, who really turned heads. Despite just six regular-season wins, the Eagles beat Altus in regionals and faced rival MacArthur for a shot to go to state. A 53-41 win propelled the underdogs with 18 losses to the state tournament, where they would lose in the quarterfinals. But it did set a tone, as Ike became a power the next couple of seasons, and made it to the state tournament each time.

And in north Comanche County, the Elgin boys made history, as the Owls, just two years removed from a three-win season, made it to the state tournament for the first time in 54 years.

Basketball wasn’t the only sport that was bringing attention, as Tipton won yet another title in football. But we’ll talk more on that in a bit.

Baseball has often had to play third fiddle (at best) behind football and basketball, though some of the smaller schools (Fletcher took home the 2010 title, which I forgot to mention yesterday) had made noise. But in 2018, there was plenty to be excited about regarding baseball in Southwest Oklahoma.

While Fletcher and Fort Cobb-Broxton both lost in the Class A quarterfinals, Marlow enjoyed a successful season, making it to the Class 3A tournament, but also falling in the quarters.

Class 5A featured two local representatives. MacArthur, in the second season under Rodney DeLong, was in its second consecutive state tournament. The Highlanders were only denied a district title by a Duncan team led by Oklahoma Player of the Year Tyler Polk, who would sign with Oklahoma State. Sadly, both teams got knocked out in the quarterfinals.

But the big baseball story of 2018 involved a program that had little history in baseball. Sure, Elgin had made it to state in 2014, but it was just the Owls’ second state appearance, the other coming 63 years before. But in 2018, it all clicked. Led by Jaken Snider and a plethora of gamer-type players ready to do anything to win, the Owls marched all the way to the state title game, destroying Verdigris 16-1 in the semis along the way.

In the championship, Elgin faced a favored Blanchard team. But in a dramatic game, the Owls held on late to secure a 7-6 win and the school’s first-ever championship in baseball.

While Elgin baseball was in uncharted territory, the Fort Cobb-Broxton Mustangs were right were again in the state tournament for basketball. In the semifinals, they faced their local rivals, the Cyril Pirates. In a closely-contested game, Kesston Mowdy hit a go-ahead shot for Fort Cobb with 38 seconds left to send the Mustangs back to the title game and the Pirates home in frustration. The next day, the Mustangs won their fourth straight championship.

While the Fort Cobb dynasty was growing, so was the one in Tipton, as the Tigers won state football a third consecutive year. Behind players like SemaJ McBride, Jeremiah Smith, Lane Chandler and Bryce Waugh, the Tigers topped Southwest Covenant to 3-peat.

It was again a headline-making year for basketball. The Ike and Mac boys made it to the state tournament, one year after the girls achieved the same feat. Unfortunately, the boys saw the same fate as their female counterparts, falling in the quarterfinals.

The Eisenhower girls made it to the state semifinals, matched up against a formidable El Reno team. Holding onto a mere one-point lead, Ike just had to hold off a last-second effort from El Reno. But a buzzer-beating shot by the Indians sent Ike home in tears.

For other local teams, it was an historic year on the hardwood for more positive reasons. Behind a suffocating defense, Jeff Zinn’s Anadarko girls made it to the finals against a Muldrow team fresh off a win over ‘Darko’s foe for most of the season, Elgin. In the title game, the Warriors held off the Bulldogs to secure the program’s third state title.

But perhaps the biggest drama came on the boys’ side of things in Class A. Once again, Fort Cobb-Broxton and Cyril were in the state tournament. However, they would be on different sides of the bracket this time. And with each team led by the coach’s son (the Mustangs led by Scott Hines’ son Kellen and Cyril by Shane McLemore’s Cason, both of them seniors), it was highly-anticipated that the rivals would meet in the final.

Well, the world got its wish. But mostly, the Pirates got their wish. Everyone in blue and white knew it would only feel right if they faced the Mustangs in the final. And Cyril proved it was worth when the Pirates raced out to a 17-10 lead. The game tightened up though, going down to the wire. With Cason McLemore scoring 25 and freshman Ryan Hart’s three second-half 3-pointers, the Pirates denied the Mustangs a five-peat and brought Cyril its first boys basketball title in 71 years.

What a decade it was. Here’s to another one!