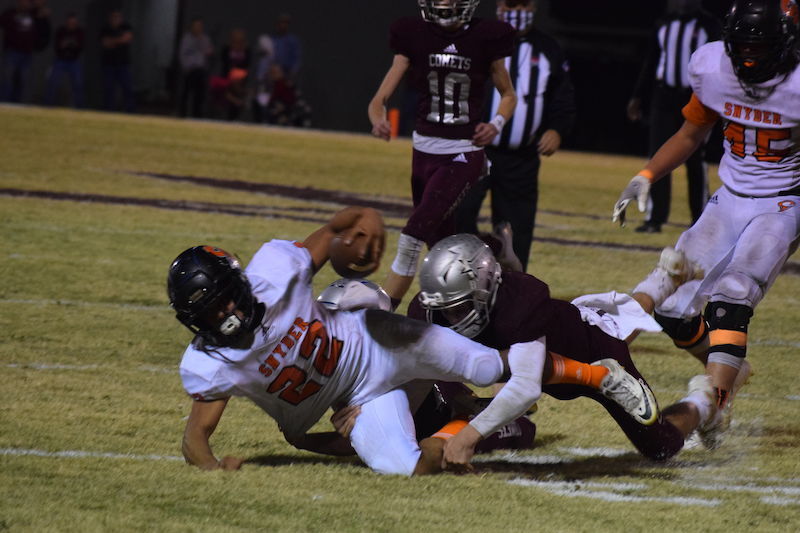 Snyder running back Jarred Galvan gets brought down by a Velma-Alma defender during Friday night’s Class B playoff game. 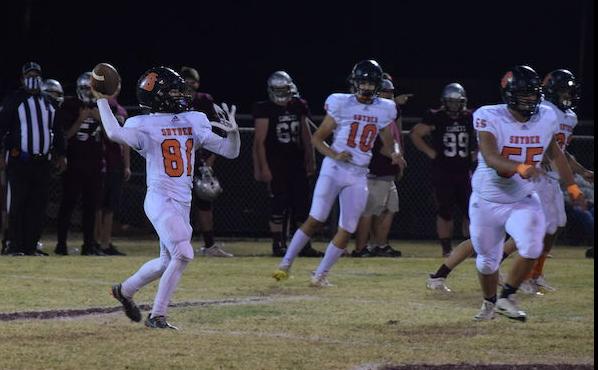 Snyder running back Jarred Galvan gets brought down by a Velma-Alma defender during Friday night’s Class B playoff game.

VELMA — Following a first-round playoff win over Strother, Snyder traveled to Velma, where, in September, the Cyclones handed Velma-Alma what turned out to be the only loss on the Comets’ resume through the regular season.

Snyder came close to making it two losses, but lost in a heartbreaker, 58-56 in overtime against Velma on Friday.

Snyder’s Kyson Lile started the overtime scoring with a nine-yard touchdown run. But the Cyclones would fail to convert ensuing two-point play, leaving room for the Comets.

Velma would take their turn to score, as Lane Jones would take it in for the touchdown from eight yards out. On the following play, backup quarterback Crue Garrett would get the carry to the outside, converting the two-point play for the win.

Snyder would take a 28-22 lead as both teams entered the break.

Following halftime, the Comets came out looking strong as Jones and Quarterback Tristian Wainscott would get Velma in scoring position. Wainscott would end the drive from the one-yard line, scoring his second rushing score of the evening and tacked on the 2-point conversion.

Both schools would trade four-and-outs as the offenses cooled off after rocket firing first half. Velma would break the spell, recovering a Snyder fumble.

Wainscott would find room and take off 25 yards, setting up the Comet offense in scoring position. Wainscott would get his hat trick on the ground, getting his third score of the night as Velma extended the lead with a 2-point conversion.

As Snyder looked desperate to score, the Cyclones turned to the duo of Tristan Anderson and Kyson Lile for a big play and they would deliver a 20-yard pass, getting into Velma territory as the third quarter ended. Snyder dug deep into the bag of tricks, running a double pass as Lile would find Ryan Kopp for a huge gain, giving the Cyclones the ball at the 5-yard line, where Anderson would fire in his fourth touchdown pass of the game, finding Kopp for the score.

With another unsuccessful two-point play, Snyder took a big bite out of the Velma lead, 38-34.

But Velma would build the lead back to 10, before it was 50-42 as the time slowly faded off the clock.

Snyder made the most of the possible last drive of the season as Anderson threw another passing touchdown to Kopp.

On a much needed two-point conversion, Snyder would answer the bell as Anderson would find Lile for the conversion, tying the game at 50 apiece.