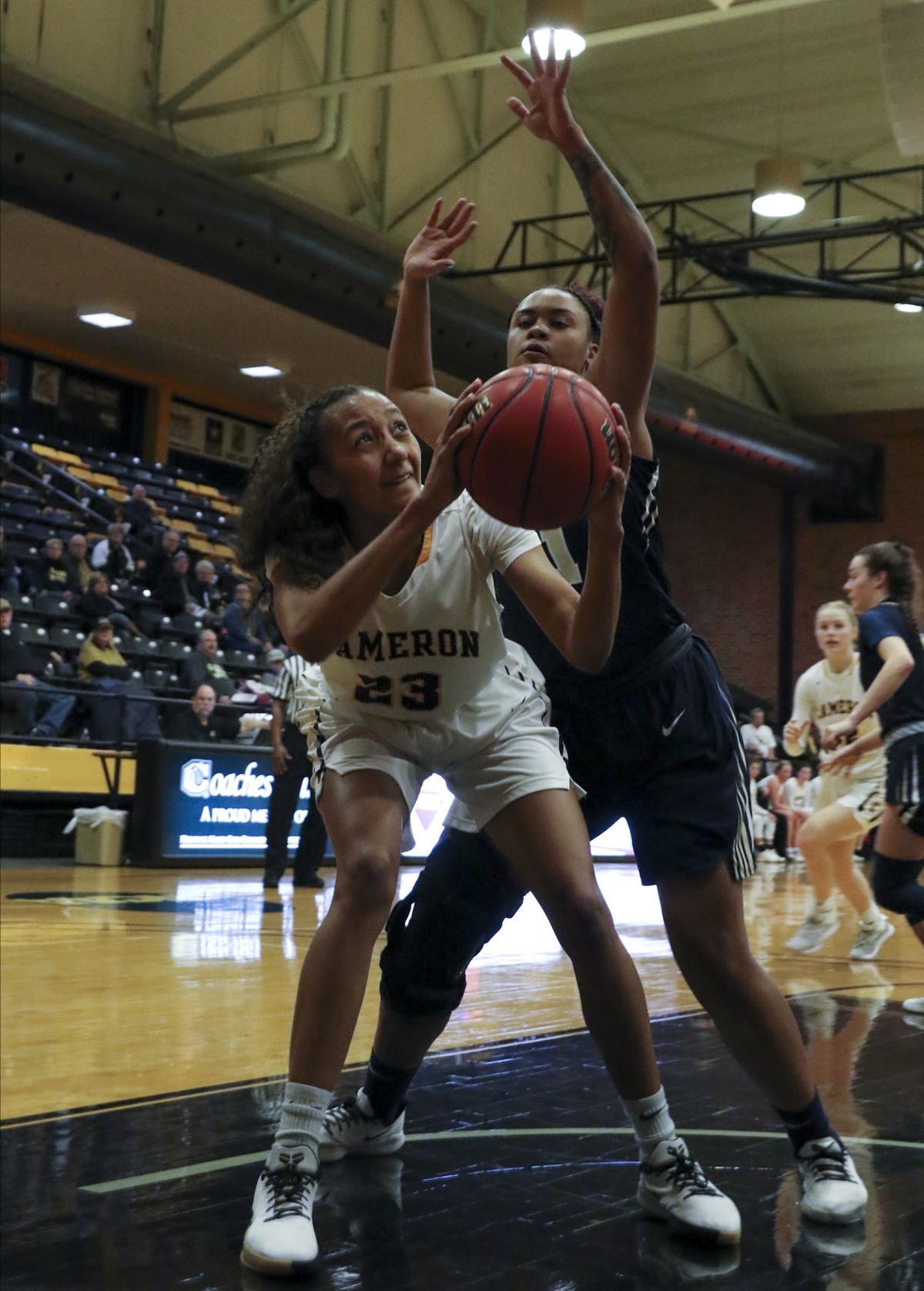 Cameron's Jazmin Luster tries to get a shot up against a St. Edward's defender during Saturday's game at Aggie Gym. 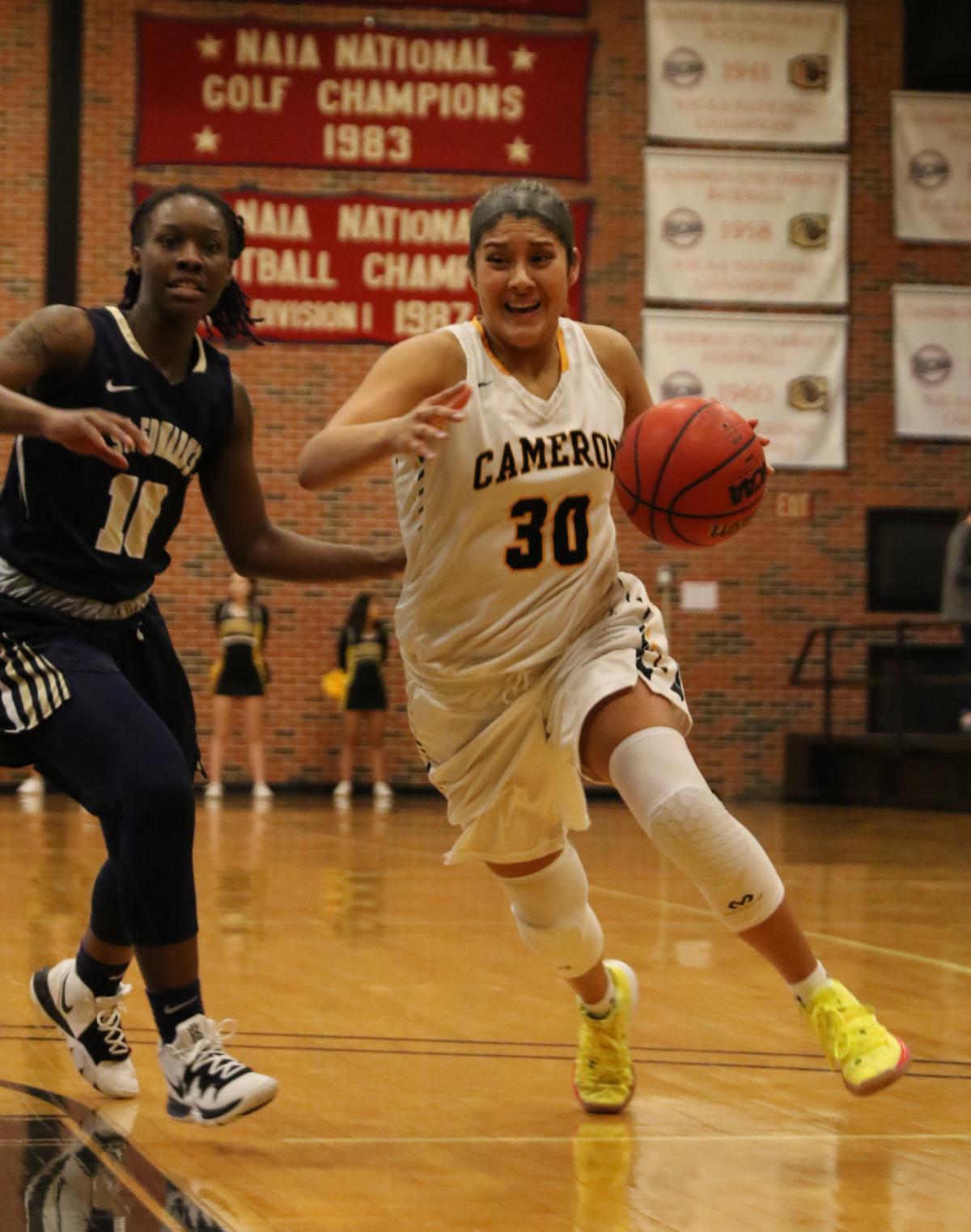 Cameron's Jazmin Luster tries to get a shot up against a St. Edward's defender during Saturday's game at Aggie Gym.

Help from unexpected places and thorough domination in the rebounding department told the story Saturday as the Cameron University women rallied for an 81-73 Lone Star Conference basketball victory over St. Edward’s University in the CU gym.

Aggie sophomore Maighan Hedge scored inside and out for a career-high 30 points. Junior Jazmin Luster added a career high with 16 points, and her 8 rebounds led the Aggies to an overwhelming 51-30 advantage on the boards.

The Ags and Hilltoppers battled through 8 ties and 10 lead exchanges before a quick 7-point burst by the 5-foot-11 Luster gave Cameron a 75-71 lead with 2:38 to play. Two drives and a follow shot accounted for 3 field goals and she capped the spree with a free throw.

St. Ed’s closed to 75-73 on a jumper by Deijah Banks, the Hilltoppers’ leading scorer with 20 points. They had one chance to tie, but a turnover led to a driving layup and a pair of free throws by Ava Battese, who finished with 14 points.

Andrews used 10 players and 9 scored. All 10 gathered rebounds, with McKenna Spikes pulling down 7 and Battese and Stephanie Peterson grabbing 6 each. Twenty-four of the 51 came on the offensive end.

“I thought this was the first time in a while we all played as a team together for a whole game, offensively and defensively,” Andrews said. “St. Ed’s is very good. They beat West Texas and Eastern New Mexico.”

“She was out for a little while,” Andrews said. “She’s getting back into it. She’s one of those kids that no matter if she plays two minutes a game or 22 minutes a game, she’ll give you everything she’s got. I think today they didn’t have an answer for her and she was aggressive at the rim.”

Hedge carried the first-quarter load for the Ags with 13 points. Luster’s 9 points in the second quarter helped the Aggies earn a 39-34 halftime lead. There were four ties and one lead exchange before a Luster free throw made it 35-34. The Wichita Falls product added a layup and Peterson drove for a bucket just ahead of the buzzer.

The Ags shot 41.7 percent from the field and drilled 7 of 8 free throws before intermission; they also battled for a 26-15 rebound advantage.

Charli Becker helped the Hilltoppers overcome a 9-point deficit in the fourth quarter when she produced a dozen points. Jazmine Jackson came off the bench to net 10.

The Aggies have a pair of jousts with Midwestern State this week, visiting the Mustangs on Wednesday and hosting the Red River Rivalry on Saturday.

“I’m really excited for these games,” Andrews said. “It’s always fun. We always get fans and they do too.

“We need to come away with two wins.”