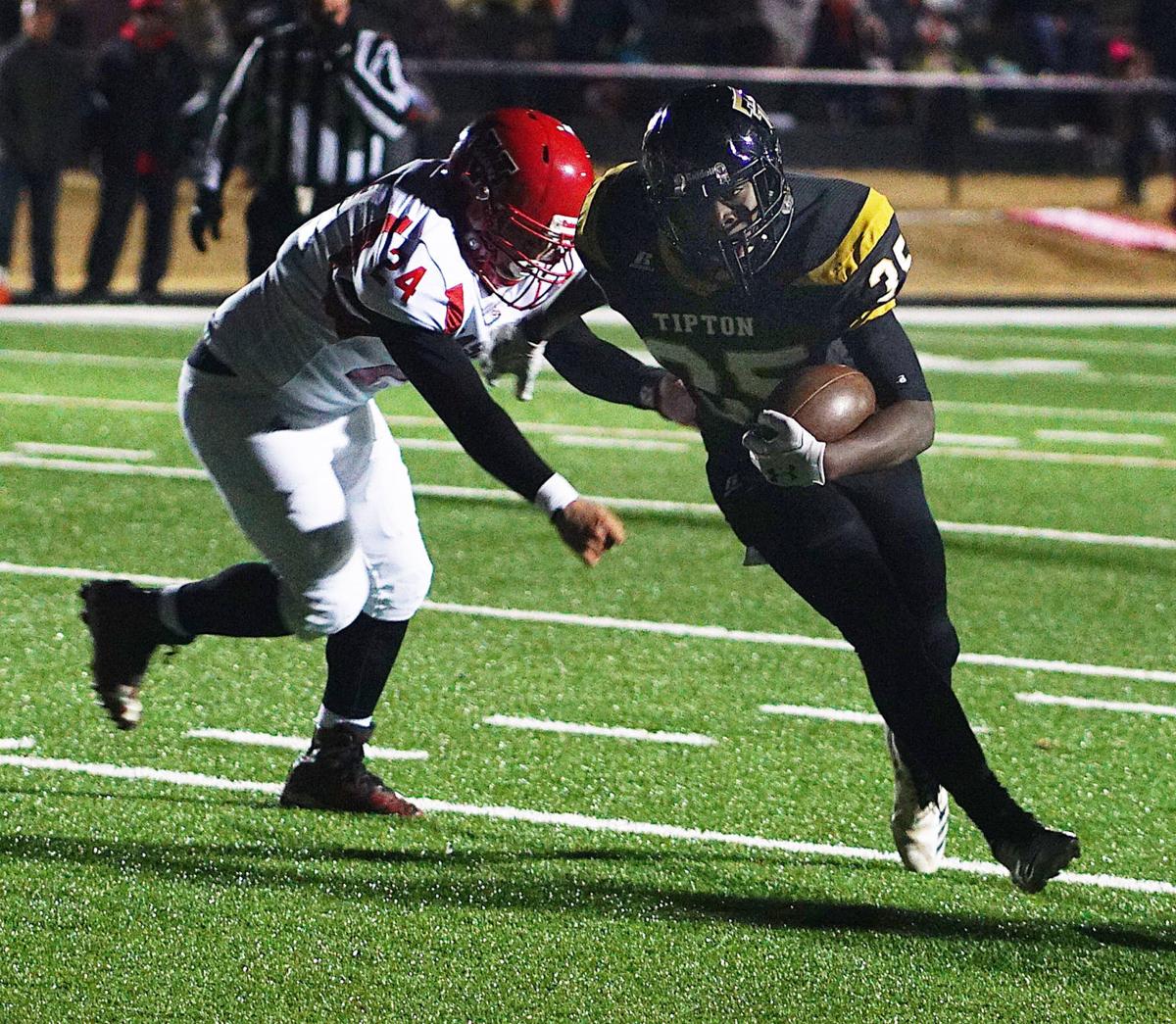 Tipton running back Prince Dweh gets around a Sasakwa defender en route to a nice gain during the first half of Friday’s Class C playoff game at Don Royal Stadium in Tipton. The Tigers pulled away in the second half to reach the state semifinals 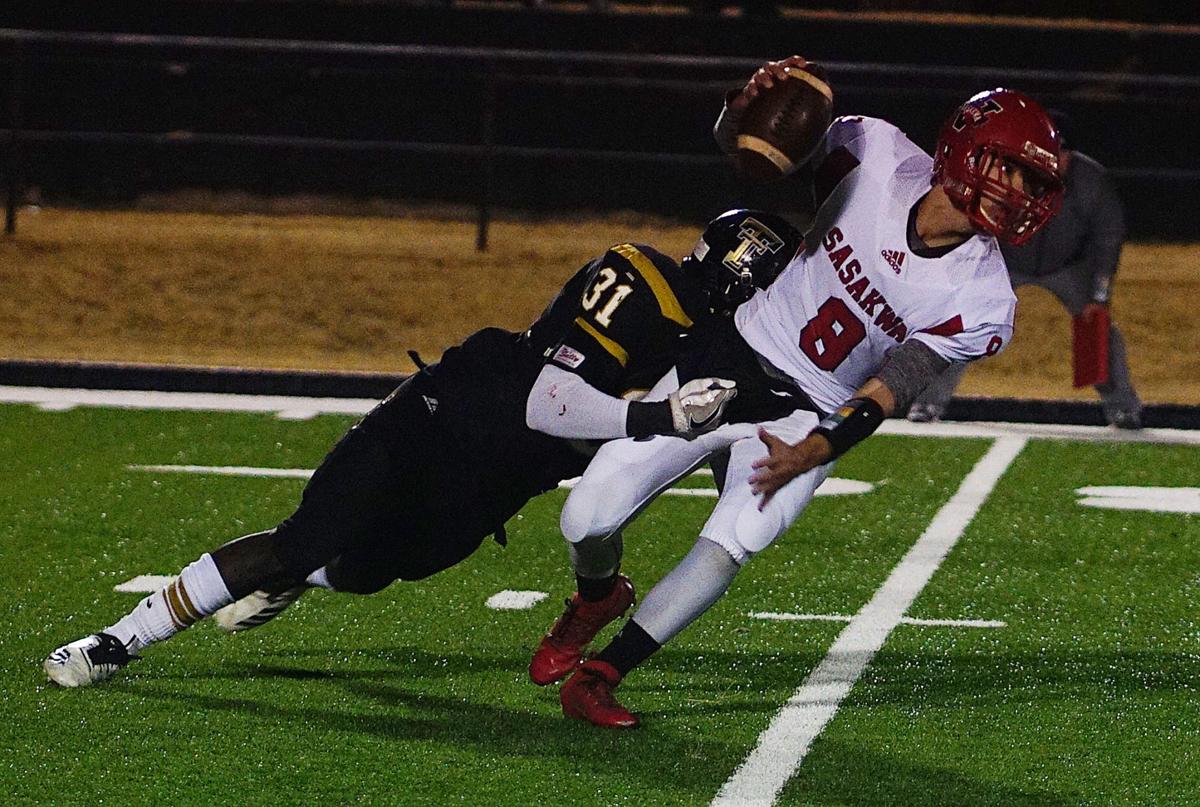 Tipton’s Jeremiah Smith, left, gets a big sack against Sasakwa quarterback Tyler Stalnaker during the first half of Friday’s Class C playoff game in Tipton. Tipton was able to pull away down the stretch to advance to the state semifinals as the Tigers continue their drive to four straight state titles.

Tipton running back Prince Dweh gets around a Sasakwa defender en route to a nice gain during the first half of Friday’s Class C playoff game at Don Royal Stadium in Tipton. The Tigers pulled away in the second half to reach the state semifinals

Tipton’s Jeremiah Smith, left, gets a big sack against Sasakwa quarterback Tyler Stalnaker during the first half of Friday’s Class C playoff game in Tipton. Tipton was able to pull away down the stretch to advance to the state semifinals as the Tigers continue their drive to four straight state titles.

TIPTON — For the second consecutive week, Tipton was engaged in an offensive shootout.

And for the second consecutive week, the Tigers were able to stave off their opponent for a playoff win. This time, it was Sasakwa who pushed the three-time defending Class C champions to the brink, getting within two points with just over three minutes left in the third quarter of Friday’s quarterfinal game at Don Royal Stadium.

But it was at that point the defense stiffened, forcing five turnovers in the final 15 minutes of play as the Tigers outscored their visitors 32-0 the rest of the way en route a 76-42 win, sending the Tigers to the state semifinals for the eighth time in nine years.

Tipton will face Waynoka in the state semifinals at a location and date to be determined in the next few days.

The Tigers were led by the senior duo of Lane Chandler and Jeremiah Smith, both of whom missed time during the season. For Chandler, it was just the fourth game he had seen the field as a knee injury sidelined him much of the season. And yet, the quarterback (who also lined up at running back much of the night), showed little signs of rust and was arguably the player of the game, accounting for 378 yards of offense and six total touchdowns.

As good as Chandler was, Smith was perhaps just as valuable. On defense, he wreaked havoc all night, along with freshman Prince Dweh. Smith accounted for 194 yards of offense and five offensive scores, and returned an interception 78 yards for the game’s final touchdown.

Early on, however, the game appeared to be a shootout. Shortly after the Vikings scored the game’s first points on a 19-yard run by Thomas Rompf, Chandler answered right back on a 54-yard touchdown run. On the following Sasakwa possession, a third-down sack by Smith forced a punt. Smith — who was the defensive stalwart for Tipton — would make his presence felt on offense on the ensuing possession, getting free for a 32-yard run to paydirt.

But less than two minutes later, Sasakwa quarterback Tyler Stalnaker found Gaylen Leetka for a 39 touchdown pass as the first quarter expired. And even though Tipton was able to match Sasakwa score-for-score in the first half, the defense had trouble containing Stalnaker and especially Rompf, who rushed for nearly 150 yards in the first half alone. Missed tackles and blown assignments continually hurt the Tigers early, and coach Travis White attributed some of that to being a byproduct of the team’s emotional win over Sharon-Mutual.

“There might have been a little bit of a hangover from that. I don’t think I can emphasize how mentally and physically draining that game was last week,” White said. “But we’ve got to get better defensively. I don’t think it’s lack of effort, it could be scheme, it could be preparation, and that falls on us coaches.”

With Tipton holding a slim 38-36 lead with about 7-and-a-half minutes left in the 3rd quarter, Tyler Waugh — who has been Tipton’s quarterback for much of the season while Chandler was out, but hadn’t thrown a pass all night — ran a play action fake and tossed a deep ball into the hands of a wide-open Jeremiah Smith, who jogged into the end zone. The 2-point attempt was no good, giving the Tigers a 44-36 lead.

Tipton appeared to stop Sasakwa on third down, but a pass interference call against the Tigers kept the Viking drive alive. Four plays later, Rompf broke a tackle and scored from 7 yards out. The conversion failed, keeping the score at 44-42.

That lasted all of 16 seconds.

On the next play from scrimmage, Chandler nimbly eluded a defender and galloped 48 yards for the touchdown. The 2-point pass made it a 10-point game. Two plays later, the Vikings coughed up the ball for the game’s first turnover. On 3rd-and-10, Chandler found running room again, going 52 yards this time.

From there, the avalanche was in motion.

Chandler finished the night with 258 yards rushing on just 15 carries. It was the type of performance that his coach has come to expect, though not necessarily in just his third game back from injury.

“I’ll tell you what about that kid, when the chips are down, he makes a play. He was not going to let his team lose,” White said.

Chandler would also intercept two passes on defense in the fourth quarter. After spending most of his senior season watching from the sidelines, Chandler was looking like his usual self. But more importantly, he was back on the field with his brothers.

“The beginning of the season was really tough, not getting to play. With it being my 12th year playing (football) and my senior season, I don’t get to play half the season,” Chandler said. “We graduated about six seniors who started last year, and I had little time to mesh with these guys, but we’re trusting each other and leaning on each other.”

It will be the fourth consecutive year the Tigers will have made it to the state semifinals, and have played on Thanksgiving weekend. And while some families will begin Thursday by watching the Macy’s Parade, the Tigers have another Thanksgiving Day tradition in mind.

“That’s the goal, to practice on Thanksgiving, and we accomplished that,” Chandler said. “But we have bigger goals, and that’s to win a state championship.”