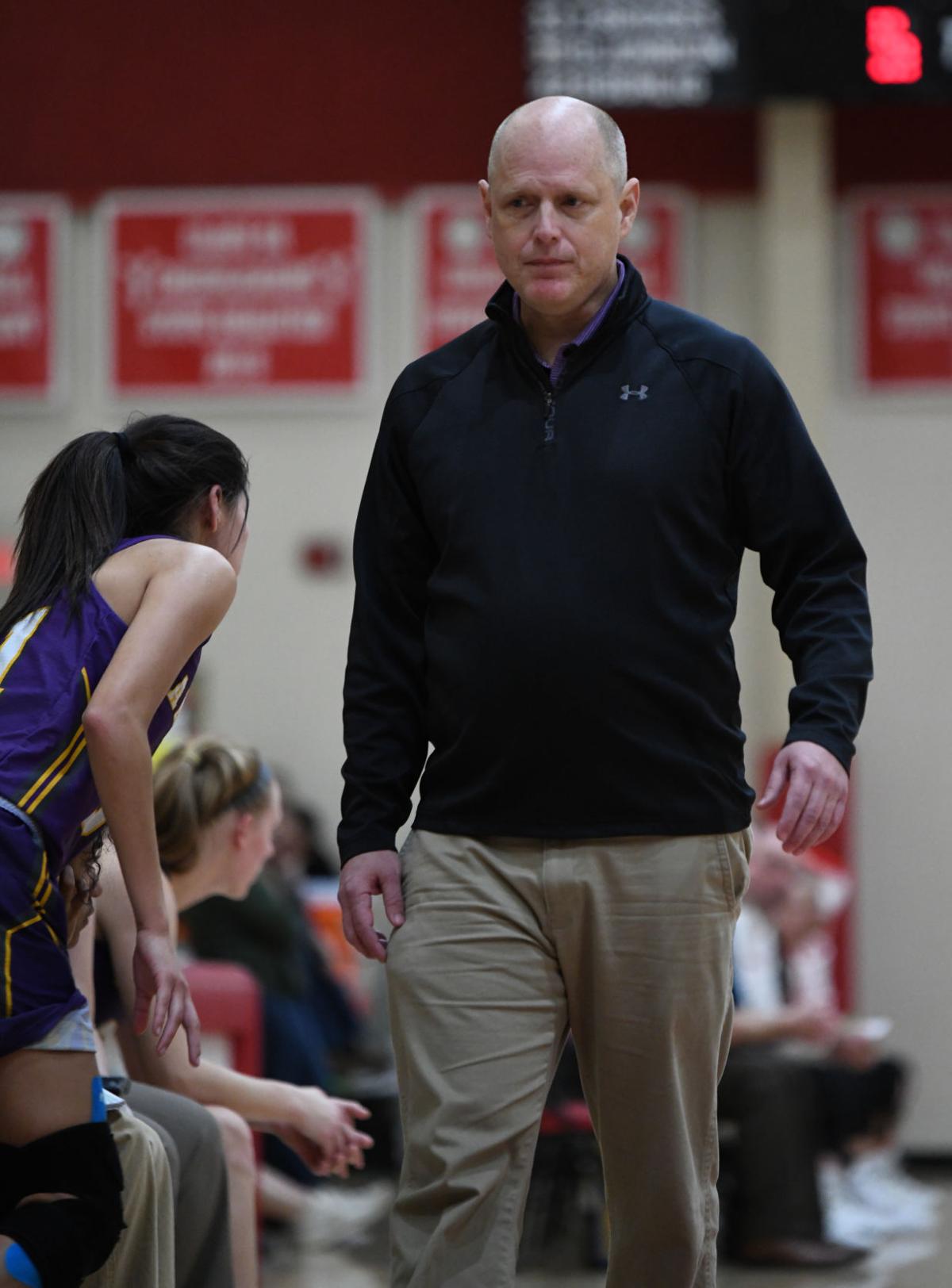 Anadarko girls basketball coach Jeff Zinn announced his retirement last week, after leading the Warriors to 540 wins and two state championships in his time there. 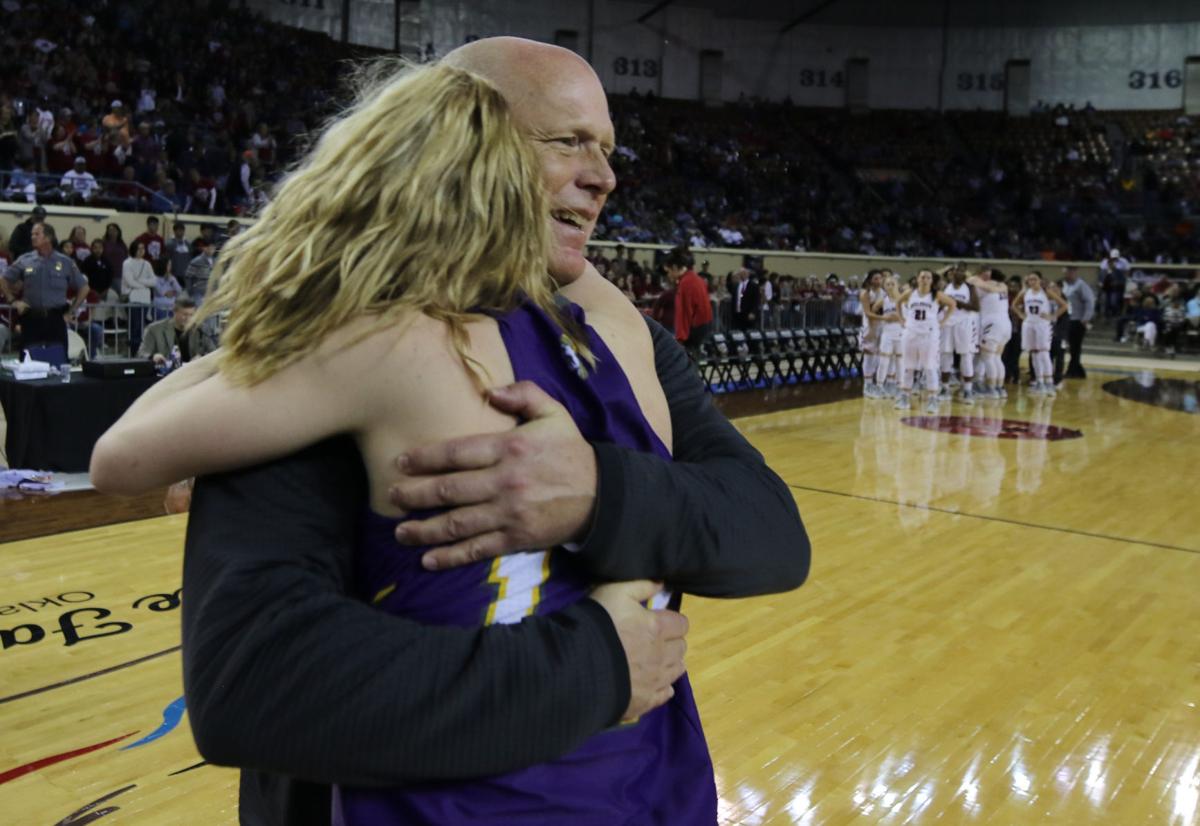 Moments after the buzzer sounds, Averi Zinn jumps into the arms of her father, Anadarko coach Jeff Zinn, for a hug following the Warriors’ 54-49 state championship victory over Muldrow in 2019.

Anadarko girls basketball coach Jeff Zinn announced his retirement last week, after leading the Warriors to 540 wins and two state championships in his time there.

Moments after the buzzer sounds, Averi Zinn jumps into the arms of her father, Anadarko coach Jeff Zinn, for a hug following the Warriors’ 54-49 state championship victory over Muldrow in 2019.

ANADARKO — After 30 years in coaching and 540 wins, Jeff Zinn has decided the time was right to stop.

For now, at least.

Zinn spent the last 10 years as the head girls basketball coach at Anadarko High School, raising the already-stout program’s status and winning two state championships in the process. He has coached Division I players, he’s coached his daughters and he’s coached defense better than most can even dream of.

But there comes a point for everyone when a change is needed. And while his teams were on a dominant run over the past three seasons that included a 76-7 record and a state championship in 2019, Zinn was beginning to think about the next step.

“Believe it or not, it was probably a couple years ago or middle of last year. Mentally and physically, I just figured I need to take better care of myself and take a break,” Zinn said. “Everybody thinks it’s all fun and games, running out there, winning games, but it wears on you.

“I looked down deep and realized, ‘I’m stressing so much about the next one and the next one that I’m not able to enjoy this one.’”

Zinn was the head coach at Newkirk for 4 years and Blanchard for 13 years. Zinn took over the Anadarko program before the 2011-12 season. The Warriors had won a state championship in 2005 and made the semis in ‘06. But since then, it had been nothing beyond the quarterfinals. Zinn wanted to change that.

“I was able to come in and put in a new defensive system and I knew the talent was there that we could put pictures on the wall, not just pictures,” Zinn said.

The transition period was quick and painless, as the Warriors won a state title in his first season, led by future Oklahoma State player Lakota Beatty. The Warriors proceeded to make it to the state tournament every season And while the past three years may have been the best teams Zinn has coached, they were thwarted by COVID-19 last season and Tuttle in this year’s Class 4A state semifinals.

“I wanted a title this year more badly than any I’ve ever wanted, it was almost unhealthy. Sometimes you’ve got to realize, ‘I’m human too’. Nobody wanted it worse for those kids than I did.”

Despite a disappointing end to his season and career, Zinn said the idea of coming back for a potentially happier ending hardly crossed his mind. He was done, period.

“I felt like I gave everything I had left in my tank. The Anadarko program was great before I got there and there might be a little bit of a rebuild, but it won’t be like other people’s rebuilds,” Zinn said. “They’ll be back, soon.”

His second title team was led by his daughter Averi Zinn, while his twins Libbi and Layni were seniors this season. All his players became like daughters, but blood remained thicker than anything.

“I think coaching my daughters is a blessing I’m appreciate more as the years go by. Everybody thinks that when you coach your daughters, it’s tough because of the team chemistry. That was never a factor,” Zinn said. “But when your own kids are playing, that pressure is kind of magnified.”

Zinn said he would like to still be around basketball and won’t rule out a future comeback, just not this season.

“First, I’ve got to figure out what retirement is going to be for me,” Zinn said. “For a lot of people, that means they’ve got a lot of money saved up and they can relax.”

Zinn said he’s never been one for moving. He likes to stay at one place for a while and soak things in. By staying in Caddo County for a decade, he and the Anadarko community became intertwined. Yet he says he knows it will continue to be a power, regardless of who steps in.