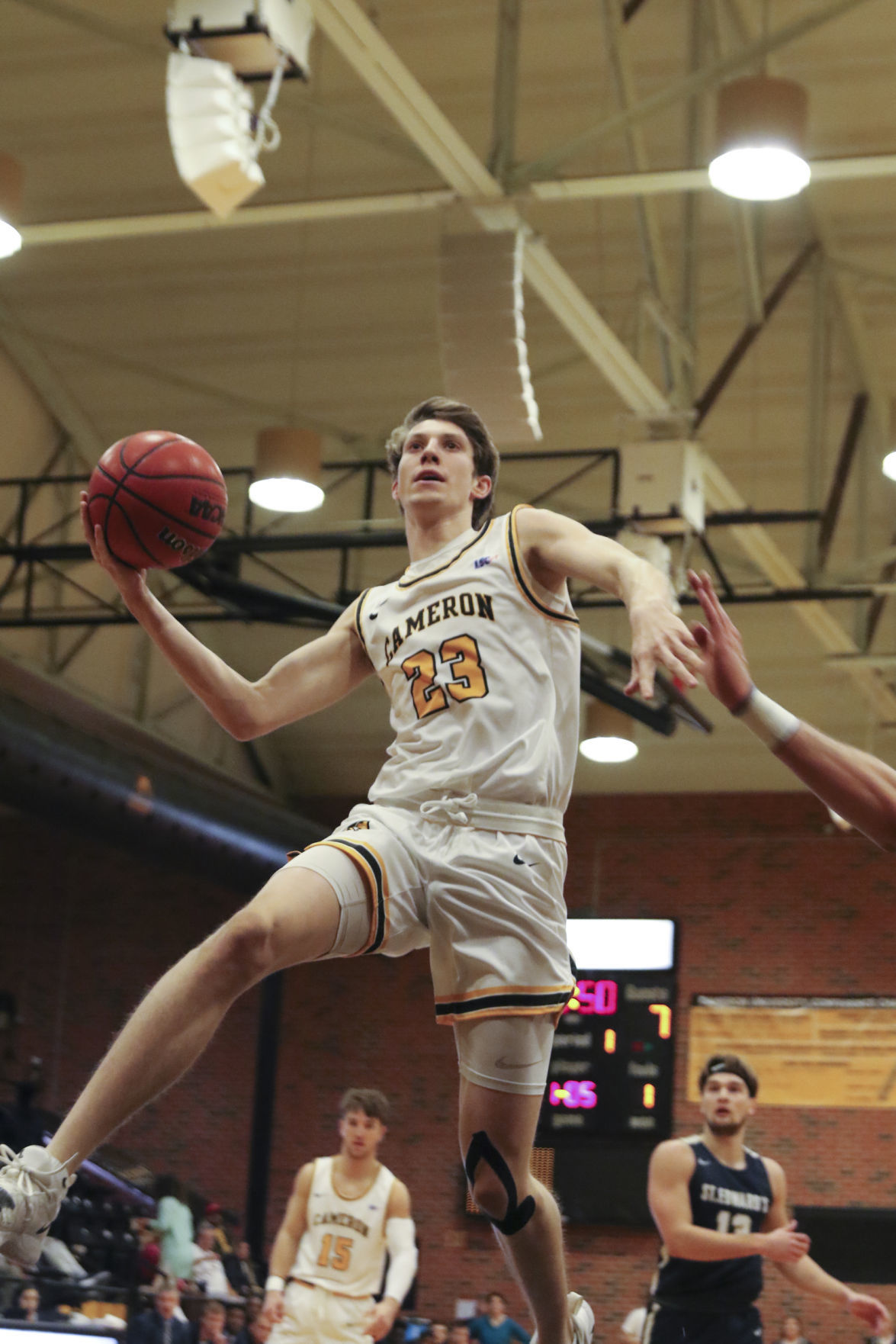 Cameron’s Conner Slater glides to the basket against St. Edward’s during Saturday’s game at the Aggie Gym. 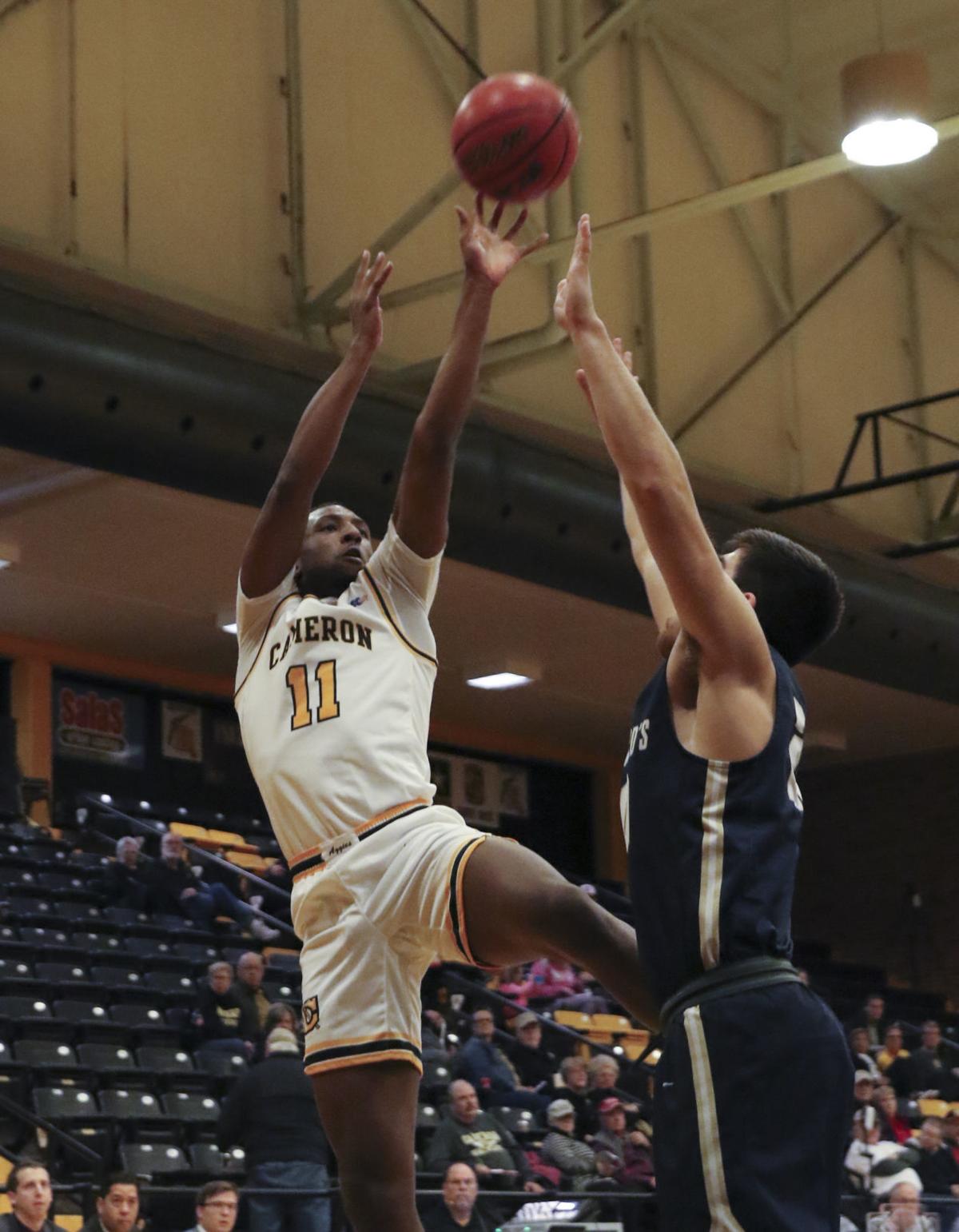 Darius Green shoots a fadeaway over a St. Edward's defender on Saturday night.

Cameron’s Conner Slater glides to the basket against St. Edward’s during Saturday’s game at the Aggie Gym.

Darius Green shoots a fadeaway over a St. Edward's defender on Saturday night.

St. Edward’s University flexed its muscle and added a touch of finesse Saturday en route to an 88-76 Lone Star Conference men’s basketball victory over Cameron University in the CU gym.

The Hilltoppers, ranked No. 7 in NCAA Division II, pounded the ball inside to score 36 points. That power approach drew 25 personal fouls that resulted in a whopping 28-9 margin at the free throw line.

Balance was a factor as six Hilltoppers scored in double figures. Ashton Spears hit his average with 18, August Haas added 17 and pitched in 10 assists, while Dorian Lopez had 16 points and 14 rebounds to lead the charge.

Cameron countered with 55 points off its bench. Redshirt freshman Kinyon Parker, a Lawton Eisenhower grad, made the most of his first extended appearance by popping 17 points. The 6-2 guard hit 5 of his 6 3-point attempts.

Sophomore Andrew Nguyen matched that 17-point output, going 3 of 4 from the perimeter and swishing 6 of Cameron’s 9 free throws. Sophomore forward Kendall Scott added 10 points, completing his chores with a slam-dunk.

“Andrew Nguyen played well,” CU Coach Andrew Brown said. “I though (freshman) JeMarcus Caldwell came in and played well the second half too. He had 3 quick assists finding the open guys.

“Obviously Kinyon shot the ball extremely well. He’s a very, very good shooter. I was proud to see him get an opportunity and to take advantage of it.”

Brown was disappointed with the slow start.

“I thought the last 10 minutes, we played really unselfish,” he said. “We created open shots for each other and that’s when you saw us hit 5 or 6 threes down the stretch.

“Honestly, going into the game, that was the game plan all along was to attack their trapping and get it into the corners for open shots. We were not able to get into that and execute that for the first 25 or 30 minutes.

“Down the stretch, we did and I think you can see where it could have been a lot different if we had trusted our ability to see what we see on film and to carry it over into a game.”

St. Edward’s allows just 66.6 points per game and 42-percent shooting with its trapping defense. The Ags scored 76 and hit 46.7 percent.

“For the most part, when we attacked that trap and kicked it, we got wide-open shots,” Brown said.

“I thought our kids kept playing hard. We kept battling. A lot of times when they get teams down 15 or 20, they end up beating them by 30 or 40. Our guys kept up and didn’t allow that game to get worse. We competed and we fought.”

Cameron refused to go away, fighting back from a 15-point deficit to get within 6 (28-22) when Jordan Lewis drilled a trey to cap a 6-0 run. Then the Ags hit a 3-minute drought and the Hilltoppers opened a 35-22 advantage as Haas added 4 more points.

The margin was 43-34 at intermission when Nguyen converted a pair of free throws off a Hilltopper technical after the buzzer.

Haas and Doria had 11 points each for the Texans; Nguyen led the Ags with 10.

St. Ed’s lived at the free throw line in the second half, converting 15 of 18 attempts to go with 12 field goals. Six were treys.

Cameron renews its old rivalry with Midwestern State this week. The clubs will play in Wichita Falls on Wednesday and in Lawton on Saturday.

“Now we get ready for Midwestern twice,” Brown said. “They have a good team. I feel like we match up very well with them, but we have to trust each other enough to execute a game plan and have five people on the same page.”