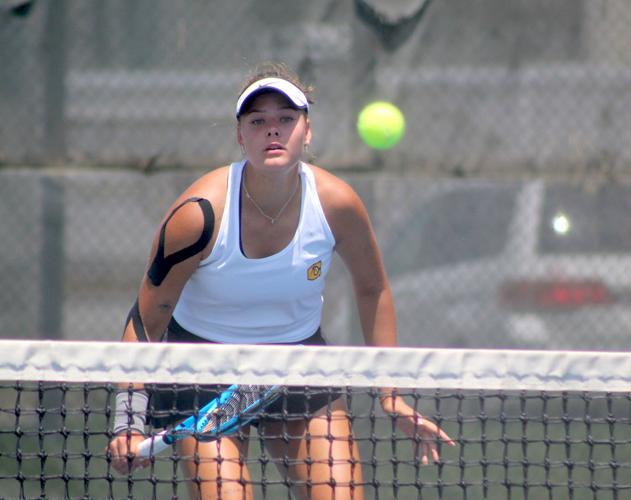 Anastasia Uspenskaia of Cameron returns a volley during Saturday’s regional. 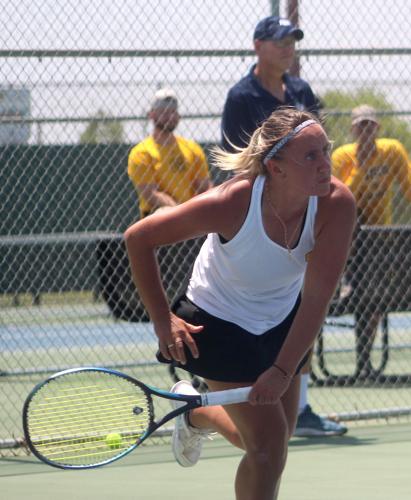 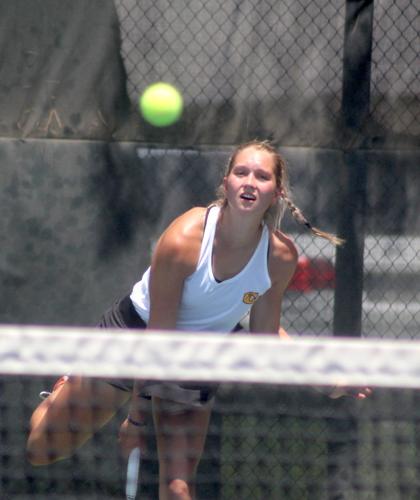 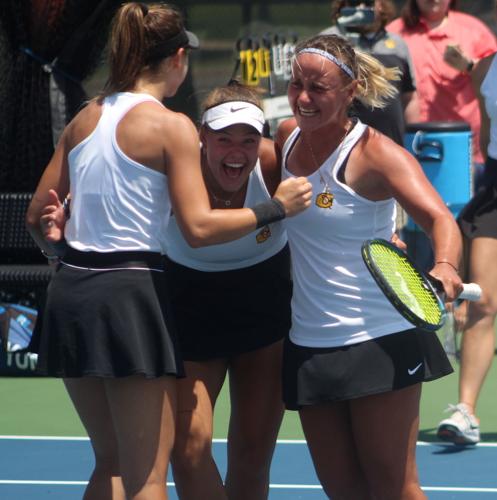 From left, Cameron teammates Vasilisa Polunova, Anastasia Uspenskaia and Karolina Glowinska celebrate after the doubles team of Polunova and Glowinska earned the Aggies a point by winning their match against Angelo State’s Ayda Guler and Ramitha Irrinki during the NCAA Division 2 South Central Regional on Saturday at the Streich-Henry Family Tennis Complex in Lawton. 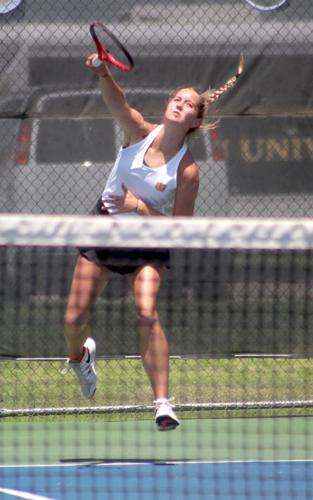 Anastasia Uspenskaia of Cameron returns a volley during Saturday’s regional.

From left, Cameron teammates Vasilisa Polunova, Anastasia Uspenskaia and Karolina Glowinska celebrate after the doubles team of Polunova and Glowinska earned the Aggies a point by winning their match against Angelo State’s Ayda Guler and Ramitha Irrinki during the NCAA Division 2 South Central Regional on Saturday at the Streich-Henry Family Tennis Complex in Lawton.

The 9th-ranked Aggie women’s tennis team punched their ticket to the NCAA Division II National Tournament on Saturday as they beat No. 22 Angelo State 4-1 in the South Central Regional.

Cameron, who entered the postseason as the two seed in the region, earned a chance to host the 3-seed Rambelles in a rematch of a Lone Star Conference contest that was won 5-2 by the Belles on CU’s home court.

Saturday at the Streich-Henry Tennis Complex, the Aggies had revenge on their mind, and it started in doubles play.

The two teams split the matches at one and three with CU’s Kateryna Rudenko and Lea Manga winning 6-1 at three and the 10th ranked Anastasia Uspenskaia and Magda Wawrowska losing 6-2 to another ranked duo. Karolina Glowinska and Vasilisa Polunova gave CU the 1-0 lead with a 6-4 win at two.

After batting in her opening set 7-5, the freshman Rudenko battled back to tie the second set at six and then won the tiebreak 7-4 for the win at four and give Cameron their first trip to the National Tournament since 2016.

Wawrowska was on the verge of earning the fourth point on five, as she was up 5-1 in the third set, while at one Polunova had just evened up her battle with the 13th ranked Dianela Rodriguez with a 6-4 set two victory before the match was called.

“I’m proud of the way our girls fought today,” said Cameron head coach and LSC Coach of the Year Josh Cobble. “They really wanted this win after losing to (ASU) during the regular season and they each came out and played hard to earn this win.”

Cameron now 21-5 this season will move on to compete at the National Tournament in Altamonte Springs, Fla. They await their seeding for the tournament which will be May 17-21.

“We are excited to be able to advance to the national finals. This is a special group of ladies that and they earned this opportunity. If we can take the energy and effort that we played with today to Florida, we have a good shot at making a run there.”

Should the federal government forgive all student loans?