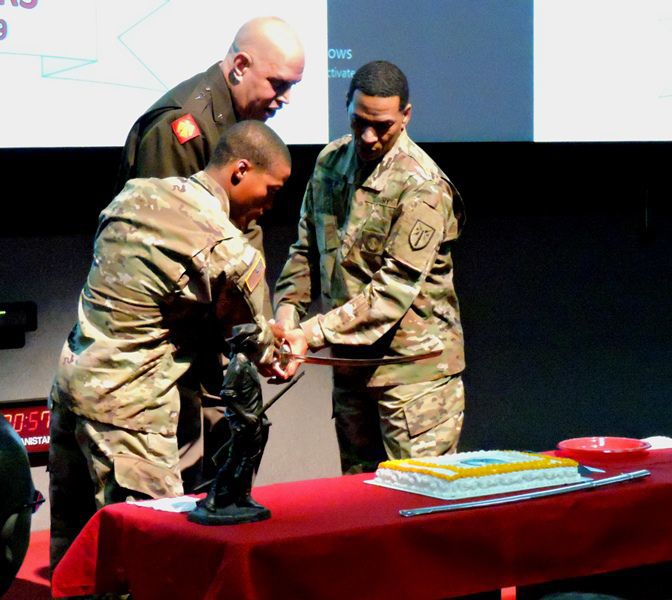 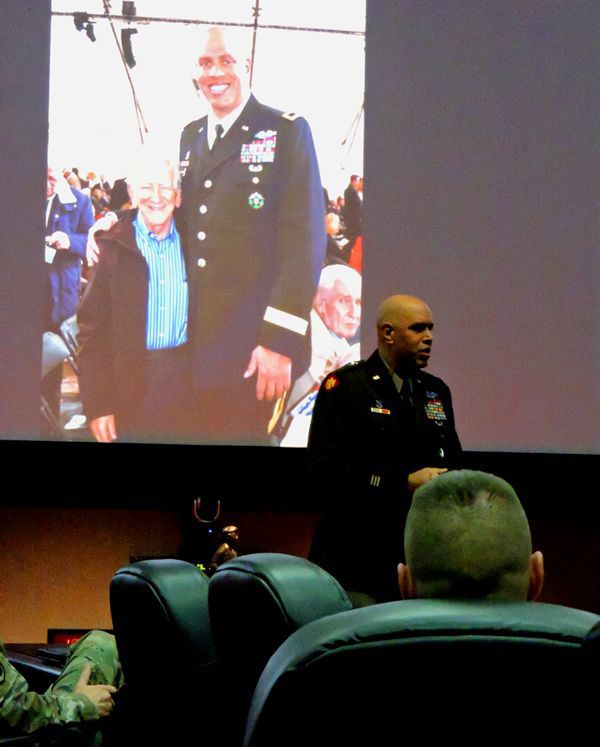 Maj. Gen. Michael C. Thompson, Oklahoma's adjutant general, talks about meeting a 94-year-old survivor of Dachau (seen with him on the slide) at the 70th anniversary of the concentration camp's liberation on April 29, 1945.

Maj. Gen. Michael C. Thompson, Oklahoma's adjutant general, talks about meeting a 94-year-old survivor of Dachau (seen with him on the slide) at the 70th anniversary of the concentration camp's liberation on April 29, 1945.

The Adjutant General of Oklahoma, Maj. Gen. Michael C. Thompson, put on the Army’s new retro uniform to make a point at a celebration of the National Guard’s 383rd birthday held Friday on Fort Sill.

Oklahoma National Guard units made a major contribution to the war effort during World War II, Thompson noted. Gen. George C. Patton called the 45th Infantry Division, composed of citizen-soldiers from Arizona, New Mexico, Colorado and Oklahoma, “among the best if not the best infantry division in the history of combat arms.” The Thunderbirds fought for more than 530 consecutive days.

Another Guard unit, the 29th Infantry Division, actually stormed the beaches at Normandy on D-Day.

Friday also marked a personal anniversary for Thompson, as he joined the National Guard 36 years ago, on Dec. 13, 1983.

Thompson served in the Oklahoma Highway Patrol for 28 years, having retired in 2017. In 2005,.. he was proud to have been one of the very few to make it to OHP captain. His job was to train young men and women to be highway patrolmen. He was also a battalion commander at the time, and on Aug. 31, 2005, he got a call from his executive officer informing him that they had orders to deploy immediately to New Orleans for a post-Hurricane Katrina humanitarian assistance mission.

Although the OHP job he had spent 5 to 6 months preparing for was to start that same day, Thompson had to go tell his boss he was leaving. He went home to pack, and recalled that his wife had tears in her eyes because she didn’t know how long he would be gone or where he was going. Two days later he was in New Orleans, where he lived in an abandoned restaurant for almost eight weeks.

“My experience is just like the rest of the National Guard. It wasn’t unique, because 50,000 citizen-soldiers responded to New Orleans, which I think is incredible,” Thompson said.

The adjutant general said he thinks World War II was the Guard’s finest moment, because the nation really was at a crossroads — whether to sit on the sidelines or confront the threat posed by Adolf Hitler and his quest for world domination.

“We did the right thing,” Thompson said. “In World War II the president activated four infantry divisions, and I’m very proud to say that the 45th Infantry Division was one of those divisions that was activated.”

Thompson also described the 45th’s occupation of Munich, the Nazi Party’s base camp, where the Guardsmen planted a U.S. flag right in the center of the city on April 30, 1945. Before the day was over, Hitler took his own life. Eight days later Nazi Germany unconditionally surrendered.

The liberation of Dachau came on April 29. The allies found people broken, barely clothed, expecting to die. They found railcars full of dead Jewish people because the Nazis didn’t have the resources to burn them any more.

“There were 28,000 people that they liberated that day. If you’re from Oklahoma, that’s basically Shawnee,” Thompson said.

In 2015, a 94-year-old survivor of Dachau introduced himself to Thompson at a ceremony to mark the 70-year anniversary of that liberation. The man told Thompson that April 29, 1945, was the day he was supposed to die. He was only 24. Instead, he heard the gunshots, he saw the Americans and he saw his tormentors flee. He dropped to his knees and thanked God. Because of the Americans, he married the love of his life and lived to watch his children grow up and give him grandchildren and great-grandchildren.

At the conclusion of the ceremony, Thompson joined the oldest and youngest Guard members on post — Sgt. Maj. Gerald James and Pvt. Elias Zeller, respectively — in cutting the National Guard’s birthday cake.

James, 58, is with Headquarters and Headquarters Detachment at the Fires Center of Excellence and as of Jan. 1, 2021, he will have had 30 years of active federal service. Zeller, 17, just finished week five of basic training with C Battery, 1st Battalion, 40th Field Artillery and expects to graduate Jan. 31, 2020.

“I was extremely honored to be here today. I’ve been the youngest at a lot of things. I skipped some grades in high school,” said Zeller, who was home-schooled and graduated early, on May 8, 2019. He’s from Westcliffe, Colo.

Zeller said his enlistment in the National Guard will make him fourth-generation military. His father, retired Army Lt. Col. Andrew Zeller, was in the military for 27 years, and his grandfather served 20 years in the Navy.

Zeller said his father motivated him to serve in the military, and he encouraged joining the Army because of his own experience there.

More specifically, he wants to attend the University of Colorado at Colorado Springs. His biggest goal is to become an athletic trainer/physical therapist for the U.S. soccer team. He loves sports and played almost every sport possible in high school.

“I played three years of soccer, and it just seems like that’s the real sport. You have to be a very tough athlete to perform well in that sport,” he said.

The military occupational specialty (MOS) he’ll be pursuing is 68 Whiskey, or combat medic. Zeller’s father spent hours researching it with him, watching YouTube videos about basic training and making sure he got into the right MOS.

At the other end of the career ladder, James said he grew up watching commercials for the Army Air Force and his uncle was a drill sergeant at Fort Jackson, S.C. He decided at an early age that’s what he wanted to be.

“I’ve been to Germany, Bosnia, a lot of different installations in the United States,” James said.

He said it’s a good feeling to be a Guardsman on the National Guard birthday. He originally enlisted in the active Army in 1979 and got out in 1985, then decided to get into the Guard in 1989.

He admits he tried to retire five times, but each time he was told, “Hey, we still need you.” So he just continued to serve.