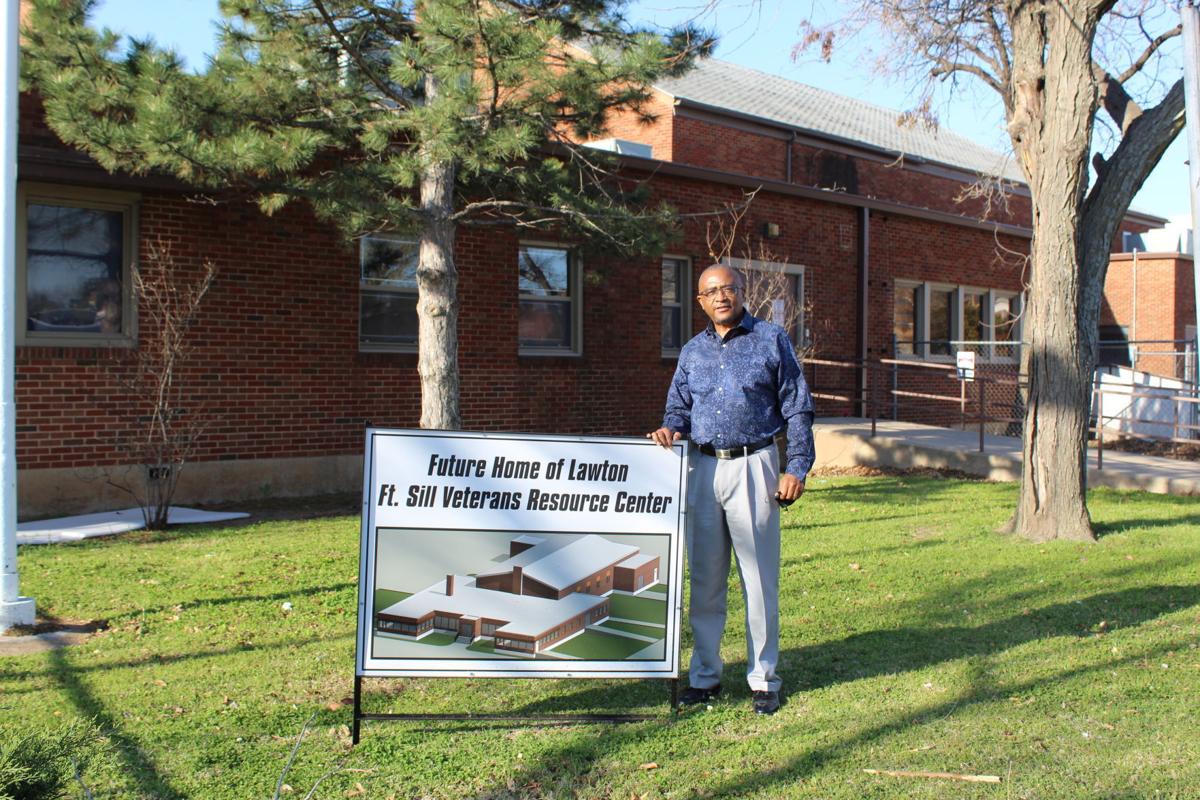 Jervis Jackson, director of the Continnum of Care for the Lawton Housing Authority, shows off the sign that designates the old Armed Services YMCA as the new Veterans Resource Center. Work to convert that structure will begin later this month, now that funding is formally available, Jackson and City of Lawton officials said. 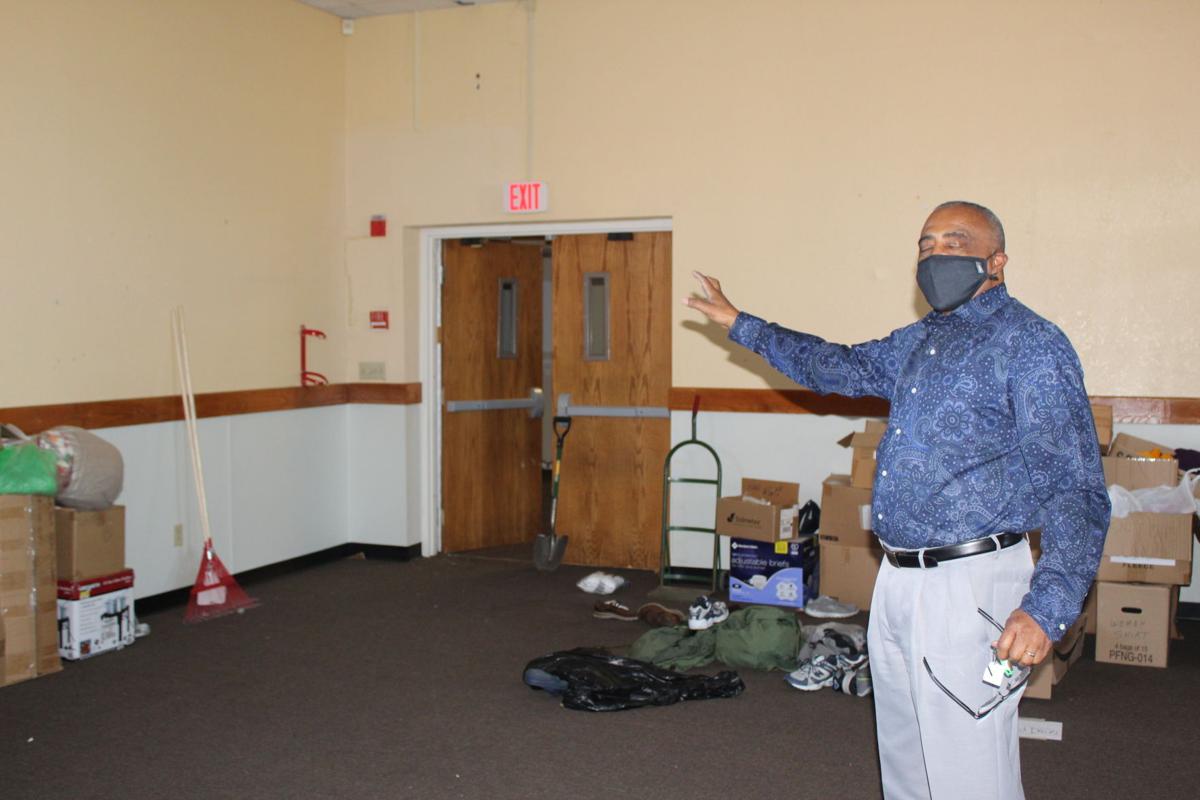 Jervis Jackson shows off some of the items being stored in the old Armed Services YMCA, which will begin its conversion to the new Veterans Resource Center by April 22. 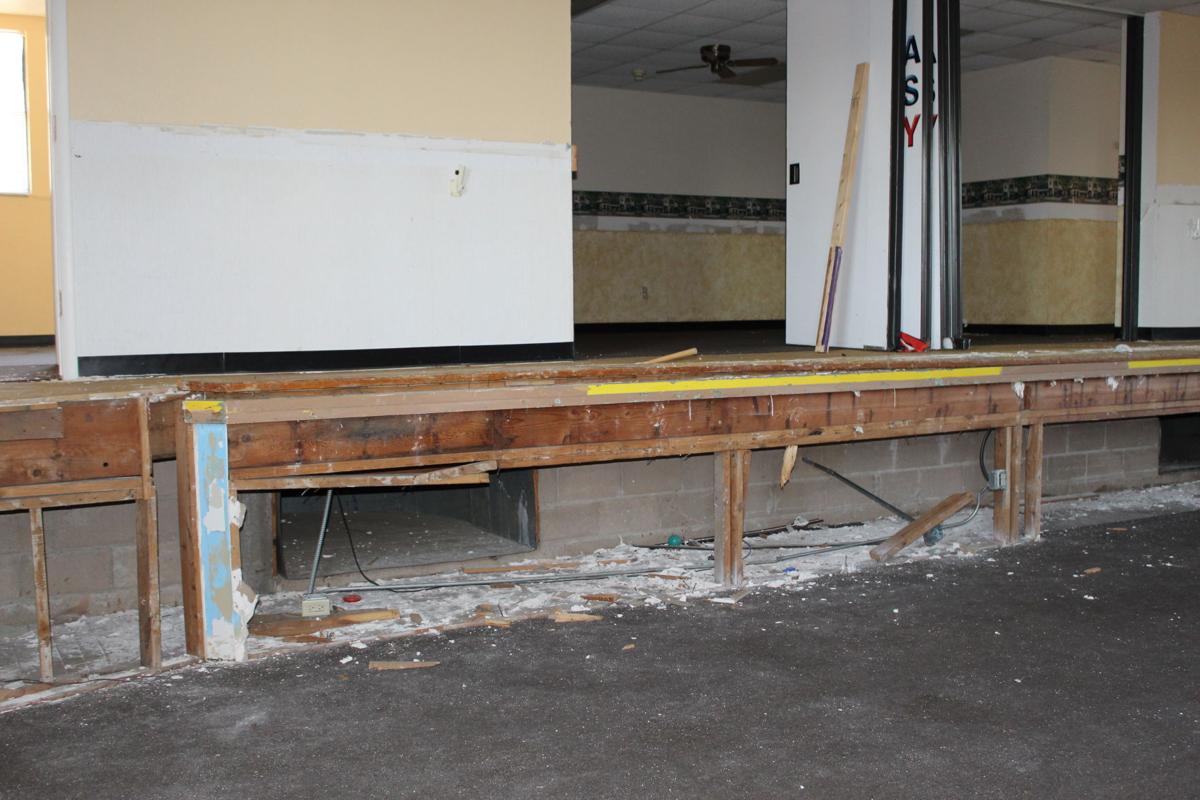 Debris from the old stage marks the beginning of a conversation that will transform the space into a two-bedroom unit for a homeless veteran family.

Jervis Jackson, director of the Continnum of Care for the Lawton Housing Authority, shows off the sign that designates the old Armed Services YMCA as the new Veterans Resource Center. Work to convert that structure will begin later this month, now that funding is formally available, Jackson and City of Lawton officials said.

Jervis Jackson shows off some of the items being stored in the old Armed Services YMCA, which will begin its conversion to the new Veterans Resource Center by April 22.

Debris from the old stage marks the beginning of a conversation that will transform the space into a two-bedroom unit for a homeless veteran family.

A vision that dates back almost 10 years is moving into reality this month.

CDBL is preparing to launch renovations of the old Armed Services YMCA on Southwest 4th Street. The goal is to begin those renovations by April 22 so the new Veterans Resource Center is functional by September, said Jervis Jackson, Lawton Housing Authority’s director of continuum of care who also has been an integral part of the process to create the resource center.

The final pieces of the puzzle came together in late March when the City Planning Commission formally added $400,000 in Community Development Block Grant funds and $150,000 in HOME Program funds to the One-Year Action Plan that designates how the City of Lawton will spend its federal allocations each year. While commissioners and staff in the City of Lawton’s housing and community development division approved use of a surplus of CDBG and HOME funding for that Veterans Resource Center project, the official allocation couldn’t be done until the entity had ownership of the old Armed Services YMCA.

Christine James, housing and community development supervisor for the City of Lawton, said that was done, so commissioners could formally set the funding. Matched with $350,000 provided by the McMahon Foundation, there is enough to renovate the interior of the Armed Services Y for the Veterans Resource Center. Jackson said the front (east) half of the structure, which contains classrooms and office space, will be renovated to house entities providing resources that homeless veterans might need.

The west half of the building, a mostly open area that contains a stage, will be transformed into housing for up to 13 homeless veterans: five individual units for men, four for women and a two-bedroom area on what is now the stage for a family of four. That housing can be provided for up to 30 days, time that will be spent linking veterans to the help they need to secure permanent housing.

“The facility is one piece,” Jackson said of a process designed to make it as easy as possible for homeless veterans to get what they need to get them off the street and into housing.

Discussions for the project began in 2012.

“We knew we had problems with veterans experiencing homelessness within the community,” Jackson said, explaining the problem was confirmed by the volunteers working I Count, a count of the city’s homeless.

Even those familiar with the problem were surprised by the results of that first count: 105 homeless veterans “just in Lawton.” That number fell significantly in the following years, but an average of 10-15 veterans (out of about 75-80 total homeless) still are found homeless every year.

It’s not that there aren’t resources available. The bigger issue is linking veterans to the services and benefits they need and deserve. It may be as simple as providing vouchers for housing; it may be ensuring they are enrolled in the VA system. But some veterans don’t want to be taken out of their comfort zone and others may not want help.

Supporters of the project followed a specific process in the early years, identifying the issue (meaning, determining just how many homeless veterans there are in Lawton), then bringing together a coalition of support entities. The goal was to link those services so they could be “attached” to veterans in need. It’s a concept best illustrated by Stand Down, an annual event held at Centenary United Methodist Church where service providers offer things as varied as clothing, haircuts, legal aid and meals.

“It’s the next step,” Jackson said, of the evolution to a Veterans Resource Center.

The biggest argument for the center is that it brings all the resources a homeless veteran could need to one spot, and that spot is the same place he is living.

The Armed Services YMCA, vacant since the “new” Y opened at today’s site in 2013, provides an ideal location. It also is linked to military history: Fort Sill built the structure in 1942 as a USO, closing it when World War II ended and allowing its conversion to an Armed Services Y. Because the building supported soldiers and their families, it already had offices, classrooms and a large recreation area that has room for conversion to living quarters.

There is room to give veterans their own living space (individual units rather than dormitory-style living), with resources literally across the hall. Those services will be varied, from housing and medical services, to things such as learning to write resumes and preparing for job interviews.

What was slowing the process was funding, and that has been taken care of, James said. And CDBL is ready to begin work, Jackson said.

The ultimate goal of those supporting the resource center is achieving “functional zero,” meaning Lawton knows exactly how many homeless veterans it has and the ability to house them for up to 30 days.

“The Veterans Resource Center will give us the ability to do that,” Jackson said, of a distinction held by only one other Oklahoma city (Norman). When Lawton achieves that goal it will give Oklahoma a distinction: the only state with two functional zero cities.

“Great is not the word,” he said, adding it isn’t strong enough.