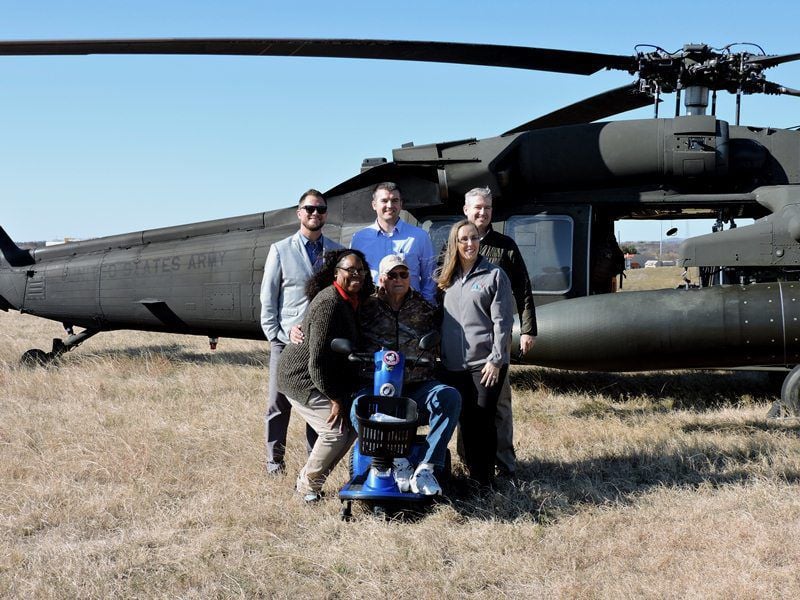 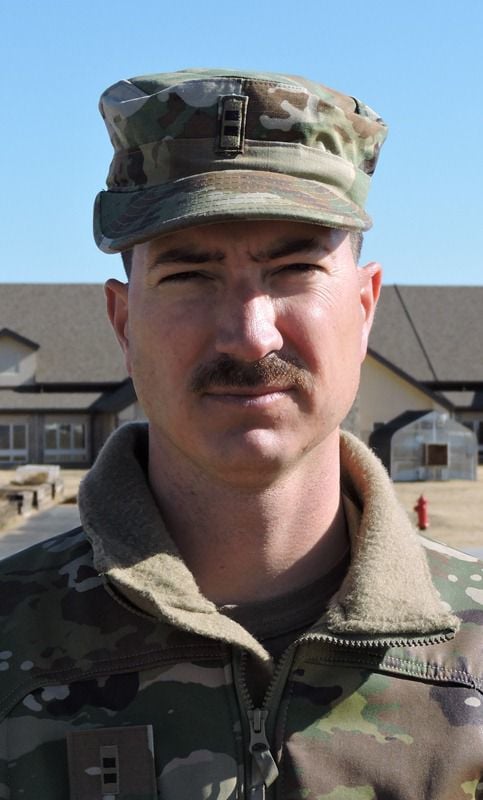 Not everyone would be pleased to have two helicopters sit down in their backyard, but for residents of the Lawton-Fort Sill Veterans Center it was a welcome diversion from everyday life.

“I think it’s neat,” center resident June Moyes said. “It shows some of the guys something that they’ve never seen.”

“I’ve been on one before, yes,” said Moyes, recalling a similar visit a year or so ago, when he and other residents got to ride in one of the twin-turreted CH-47 Chinooks. He got to go inside one Thursday, but this time there were no rides — it was too cold.

The 90-year-old Moyes said he served 20 years and three days in the Air Force. He was a staff sergeant when he retired from service at Scott Air Force Base, Ill.

“I stepped on some toes,” he said by way of explanation. “You know what toes are? Big guys.”

Don’t ask him how long ago that was — it was too far back to remember. Moyes said he grew up in Arkansas, but calls Hayti, Mo., his hometown.

The Air Force quickly found out what to do with him.

“I was in basic training. I broke up about four guys who were fighting. I put ’em on the ground. From right then, they made me an MP,” he said. “When you’re a poor boy in a small town, somebody’s gonna kick your ass. They didn’t kick my ass.”

He was an MP from that point on. Moyes said he’s lived at the center about four years now.

The National Guardsmen who flew in the helicopters were with the Montana-based 1st Battalion, 189th General Support Aviation Battalion, 34th Combat Aviation Brigade (CAB). They’re at Fort Sill doing pre-deployment training for a nine-month rotation to the Middle East. They’ve completed two weeks of training at Fort Hood, Texas, and now they’re here for a month and a half.

“The 34th CAB pulls from 15 different units for this mobilization. We’re about ready to go overseas,” explained Chief Warrant Officer 2 Russell Reinemer, pilot for the UH-60L Black Hawk helicopter that accompanied the Chinook to the Lawton-Fort Sill Veterans Center.

Reinemer said there were three Guardsmen on his chopper, and the Chinook had four. In addition, there were six Marines aboard each helo and one soldier from the 66th Aviation Brigade, which provides evaluators for the pre-mobilization training. States represented in the train-up here include Montana, Minnesota, Iowa and possibly a couple more.

Reinemer said they flew to the center “to support the community and it’s a good opportunity for veterans who served previously to see today’s forces and to be able to see today’s Army, so they know what’s going on here at Fort Sill.”