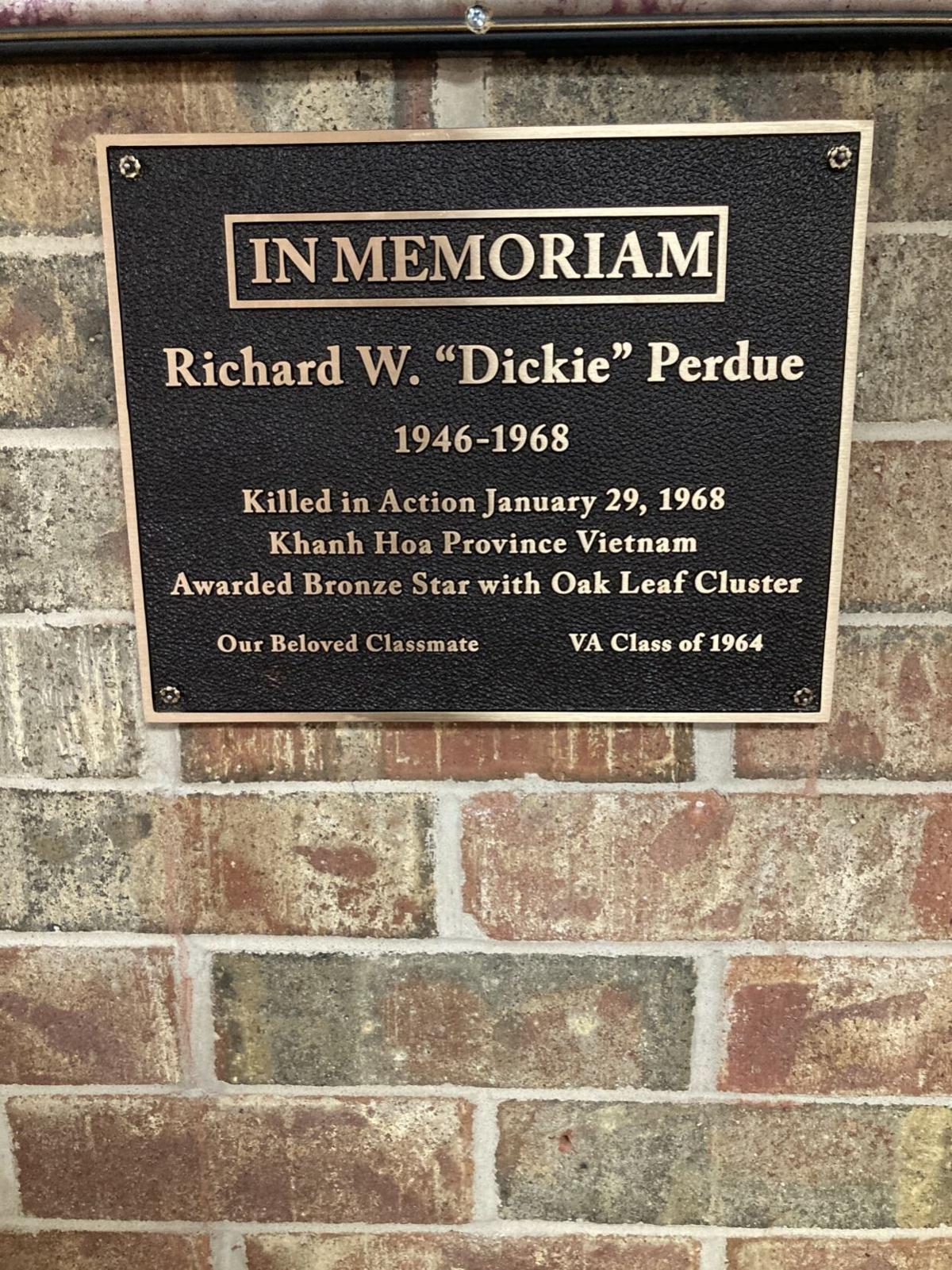 Richard W. “Dickie” Perdue, a 1964 graduate of Velma-Alma High School was killed during the opening hours of the Tet Offensive on Jan. 30, 1968 in the city of Nha Trang, South Vietnam. A plaque in his honor has been hung the plaque is hung in the Velma-Alma high school gymnasium 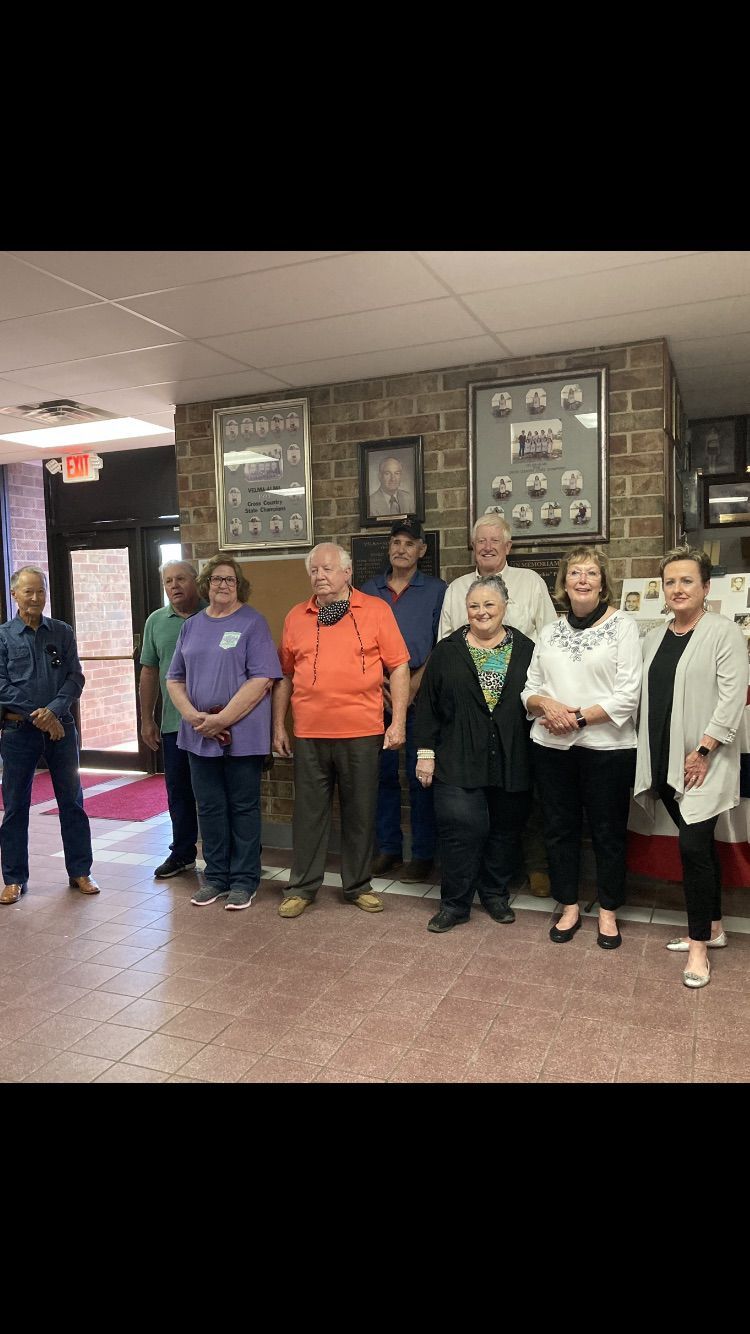 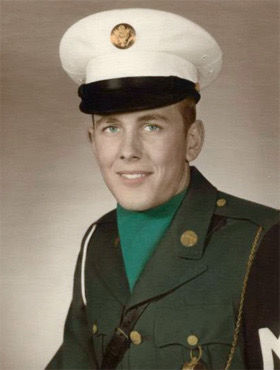 Richard W. “Dickie” Perdue, a 1964 graduate of Velma-Alma High School was killed during the opening hours of the Tet Offensive on Jan. 30, 1968 in the city of Nha Trang, South Vietnam. A plaque in his honor has been hung the plaque is hung in the Velma-Alma high school gymnasium

The Velma-Alma class of 1964 honored classmate Richard W. “Dickie” Perdue, Friday. Perdue was killed in action January 30, 1968, while serving as a military policeman in Vietnam during the opening hours of the 1968 Tet Offensive.

“We want to continue to remember our service men and woman who gave their lives for our country and Dickie was a close friend of ours,” said Chuck Murdock, classmate and friend of Perdue. “We’ve been saying for years that we needed to do something for Dickie and finally about four of us decided we were going to do it. We felt like we needed to honor him, and we all agreed that it was a testament to the fact that we’re not going to forget him.”

Specialist 4 Perdue was an MP serving with the 272 MP Company in the city of Nha Trang when the North Vietnamese Army launched a surprise attack on South Vietnam during the Tet holiday truce. These attacks, known as the Tet Offensive, officially began shortly after midnight Jan. 30, 1968 in Nha Trang, the headquarters of the U.S. I Field Force.

Perdue was off duty at the time but volunteered to assist with pushing the NVA forces out of the city and helping rescue and evacuate a team of American civilian nurses and doctors. Around 9 a.m., that morning, Perdue was killed by small arms fire while on a building roof providing overwatch for U.S. forces clearing a U.S. civil operations compound.

For their actions, which saved seven U.S. civilians, the 272 Military Police Company was awarded the Valorous Unit Award by the United States Army. The citation reads in part “The men of the 272nd Military Police Company displayed extraordinary heroism and devotion to duty which in keeping with the highest traditions of military service and reflect distinct credit upon themselves and the Armed Forces of the United States.”

Many years after the battle, at a 272 MP Co. reunion, Perdue’s sister, Beverly Johnson met one of the nurses rescued that day. Johnson said the nurse recalled the day clearly and credited the unit with making it home from Vietnam.

“Until I met that nurse, I never knew exactly what happened to my brother,” Johnson said. “It was hard for that nurse to talk about it and I think she truly believed she was going to die that day. While my brother wasn’t a sports player or anything like that, on that day he and those other men were heroes and I’m so proud that his plaque is going to be seen by so many.”

Like many Americans during the time, Perdue volunteered for service rather than waiting to get drafted, unlike so many though, Perdue, who was 22 years old at the time, left behind a wife and a daughter. Robin Perdue never met her father. Robin was born August 1967, just five months before her father was killed in action.

“The people of Velma I have nothing but respect for them,” Perdue’s daughter Robin Perdue said. “For his classmates to do this is just beyond words. I can’t express my and my family’s words for how much gratitude we have what they have done for my dad.”

“Dickie had a wife and a daughter at home waiting on him,” Johnson said. “He never saw his daughter in person. She never knew the dad she was honored to have; never had those father and daughter moments she should have had; only memories from photographs. Years after 1968 his daughter and I were contacted by those civilians he saved and they express their gratitude every July 4th, Veterans Day, Memorial Day and Christmas.”

The Lawton Constitution was unable to verify Perdue’s award of the Bronze Star with Oak Leaf Cluster; however, the Vietnam War was a chaotic time and records could have been lost or misplaced. Perdue’s name can be found on panel 35E, line 78 of The Wall at Vietnam Veterans’ Memorial.