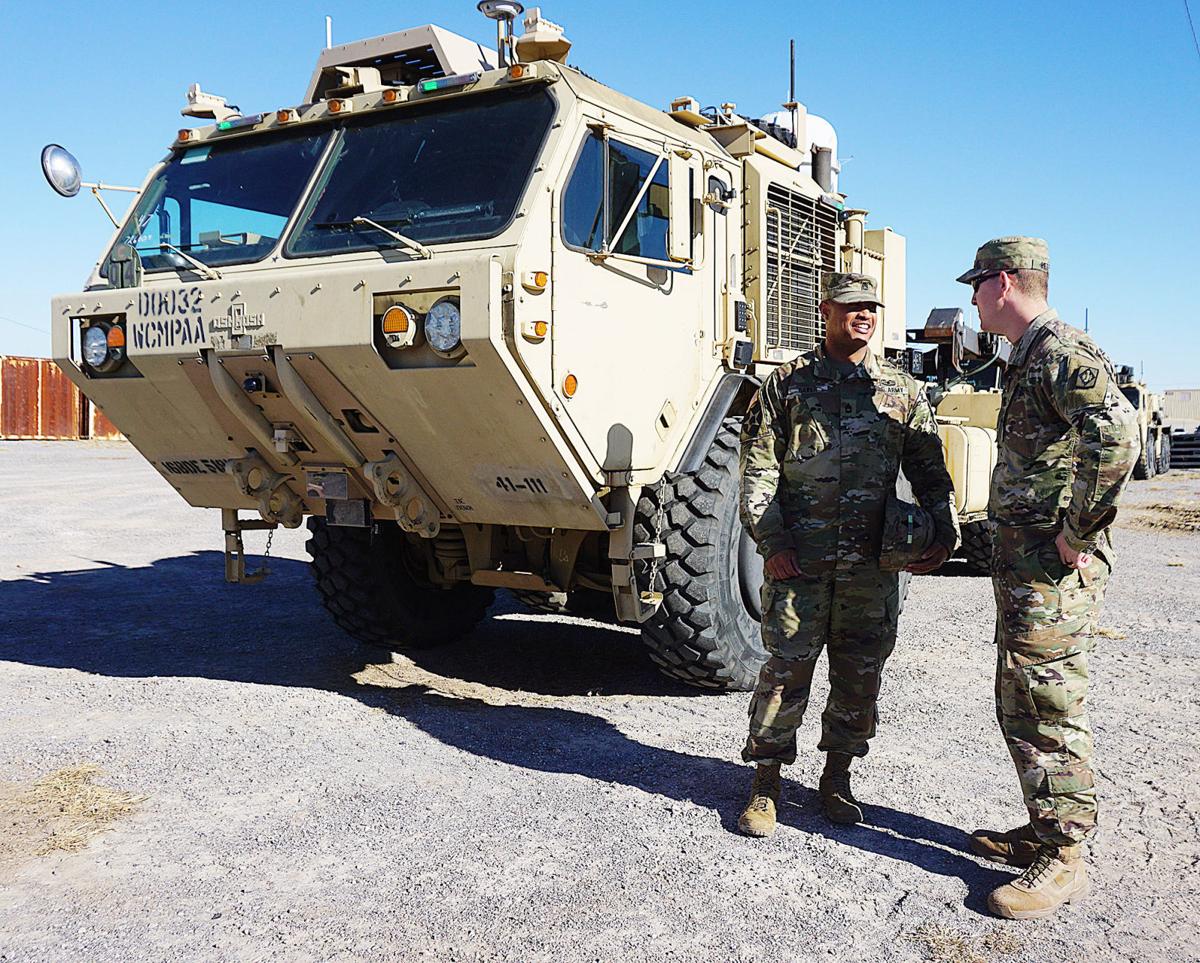 Sgt. 1st Class Reginald Baker, left, senior truckmaster for 15th Transportation Company, talks with company commander Capt. John Petty about the three new self-driving convoy vehicles that the company will test for the Army in the year to come. 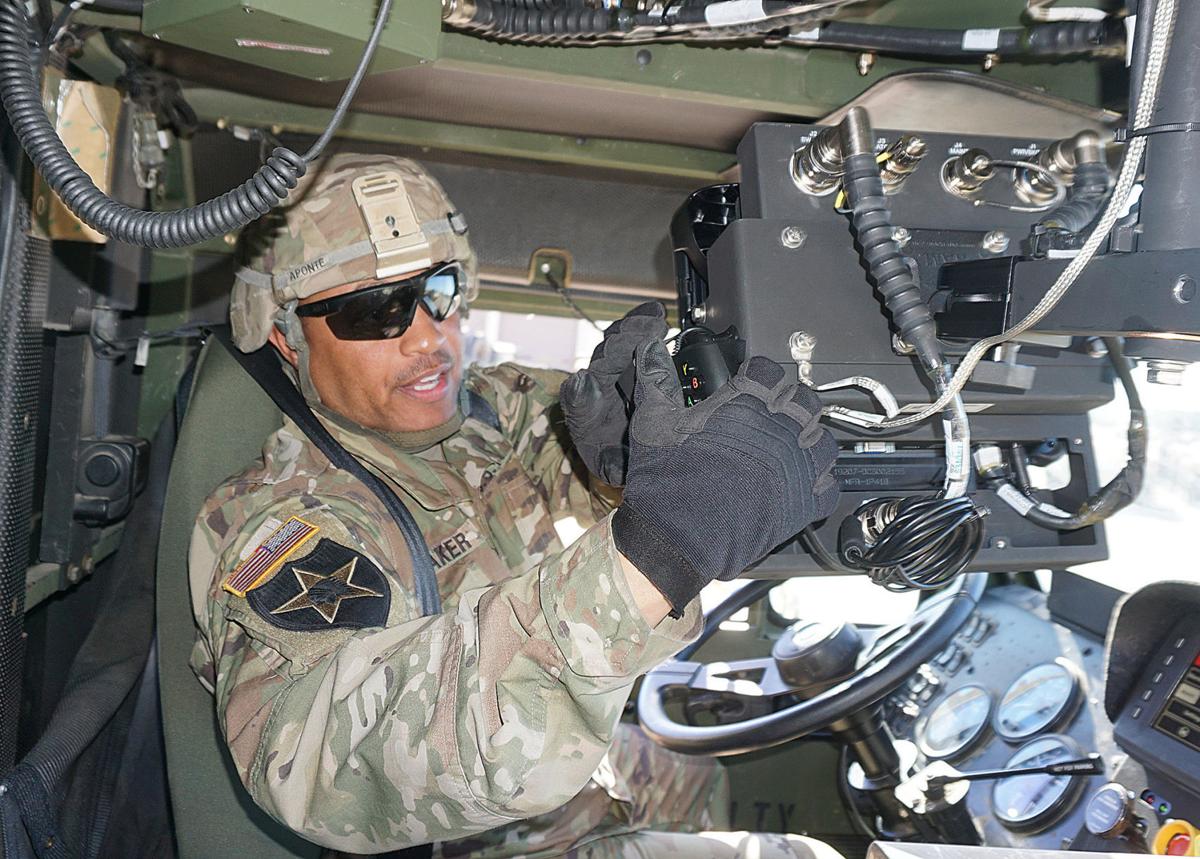 The best part of the new M1075A1 that 15th Transportation Company will test during the next year is what the company's senior truckmaster, Sgt. 1st Class Reginald Baker, is doing here — sitting back and watch it do the driving for you.

Sgt. 1st Class Reginald Baker, left, senior truckmaster for 15th Transportation Company, talks with company commander Capt. John Petty about the three new self-driving convoy vehicles that the company will test for the Army in the year to come.

The best part of the new M1075A1 that 15th Transportation Company will test during the next year is what the company's senior truckmaster, Sgt. 1st Class Reginald Baker, is doing here — sitting back and watch it do the driving for you.

Army modernization has arrived at the motor pool of one Fort Sill unit in the form of semi-autonomous convoy vehicles.

The 15th Transportation Company, an element of 75th Field Artillery Brigade, is one of only two companies in the Army that have been tasked with testing the self-driving vehicles over the next year, according to company commander Capt. John Petty.

Petty said they’ve known for more than a year the vehicles were coming. Multiple agencies have been working with these systems, especially CASCOM (U.S. Army Combined Arms Support Command) from Fort Lee, Va., which came here multiple times to make sure that this was the right setting for the training they were looking for and that 15th Trans was the right company to be able to host it.

“It’s an honor to receive these vehicles. Behind me are the first three out of eventually 30 that we will be receiving so we can start testing these at the platoon level,” Petty said.

The 41st Transportation Company at Fort Polk, La., is the other company that will test these revolutionary convoy vehicles. Both companies are waiting on the Army to publish a safety message setting forth limitations on how the self-driving vehicles can be used. As an example, for now the companies can only use the capabilities on the installations – they can’t go out onto public highways.

“This is a one-year, limited technical demonstration. It’s going to be broken down pretty much into three phases, essentially crawl, walk, run phases,” he said.

Phase one will be instructional — classroom followed by hands-on training with the vehicles.

Phase two will be squad collective training, starting in the summer of 2021.

Phase three will be platoon collective training, culminating in a training event that will be a demonstration to Army Futures Command at Fort Hood, Texas.

In addition, they’ll be going to the National Training Center at Fort Irwin, Calif., in January 2021 where soldiers of 15th Trans hope to test them at another culminating training exercise.

Since the convoy vehicles can’t drive themselves on public highways to California and back, they will be taken either by Heavy Equipment Transporters (HET) or by rail. HET is what was used to bring them to Fort Sill.

“We hope to use these capabilities to see how they are in a realistic combat environment,” the captain said.

The mission of 15th Transportation Company is to transport multiple classes of supplies — bulk food, bulk water, bulk ammunition and so on. The mission won’t change. The new convoy vehicles use the same palletized loading system (PLS) that the old ones did, and soldiers will still have a job loading supplies onto the vehicles.

Petty said the company will use the semi-autonomous convoy vehicles to increase their readiness by adding them to their mission-essential tasks.

“We’re going to implement these capabilities into what our mission is and our mission-essential tasks, and then provide feedback to the Army to see how these can be improved,” he said.

Petty said only one platoon will have the vehicles but he would like to get all 173 soldiers in the company trained on them so he will be able to switch personnel in and out. He doesn’t anticipate the new vehicles to affect the company’s manpower level, because 88 Mikes (motor transporters) will still be needed to load and unload supplies as well as provide protection for the convoys via gun trucks.

The semi-autonomous convoy vehicles serve two purposes, he noted. One is to increase survivability of the 88 Mikes, and the other is to increase the amount of goods that can be delivered to the field, and ultimately to combat environments.

“What we have here is the ‘Leader-Follower’ system. These trucks are designed and they’re fit with autonomous components and sensors that will enable the vehicle to operate unmanned or without a crew,” explained Sgt. 1st Class Reginald Baker, senior truckmaster for 15th Trans.

Soldiers will be able to digitally connect the convoy using minimum personnel, he noted. A lead vehicle driven by soldiers can have up to three driverless convoy vehicles linked to it, and the path the lead vehicle takes will create a digital picture that the others can follow.

“For us in the Trans world, that will enhance the warfighter safety while reducing the mission fatigue of putting so many personnel on the road at one time,” Baker said.

The truckmaster said “semi-autonomous” means you can drive the convoy vehicles manually if you need to.

The M1075A1 has safety features that aren’t on the M1075, such as a backup camera, 360-degree camera technology, automatic windshield wipers, lane assistance and sensors that go off if the vehicle crosses the white lines on the road, he noted.

The M1075A1 carries the same payload as the M1075. It runs on the same fuel and uses the same batteries, but it has electronic steering instead of power steering, which is much easier on turns of the steering wheel.

“When they first got here I was excited. I had an opportunity to go to Camp Grayling, Michigan, and work with the vehicles they have there, and it gave me an in-depth look into them. And I’m excited about it. I came in the Army in 1997 and started out with the base model, the first PLS system, so seeing it enhanced, what these will be able to do going forward, I am excited about it. I think that it is an enhancement that the Army will be able to use once we perfect it,” Baker said.

Her job is to watch over the maintenance of the vehicles.

“Coming right off the line, the autonomous vehicles are new and absolutely revolutionary,” she said.

She predicts they will create a demand for skilled mechanics who are as much electrical engineers as they are mechanical engineers.

“With new equipment comes new training and skills that will be on high demand,” Hardin said.

As new equipment is introduced into the Army, advanced individual training modules will definitely have to change for maintainers to be able to do their jobs, she said.

“With different sensors and vehicle motion sensors that are introduced into the new vehicles, the average mechanic will have to learn how to calibrate, how to diagnose issues that come up. So that’s going to be all part of it,” she said.

It would be beneficial for everybody in the company, not just maintainers, to learn a little bit about how to keep the vehicles in good running order, Hardin advised.

As for the January 2021 trip to Fort Irwin for the culminating exercise, Hardin said, “I’m looking forward to the challenges and the opportunities it holds.”