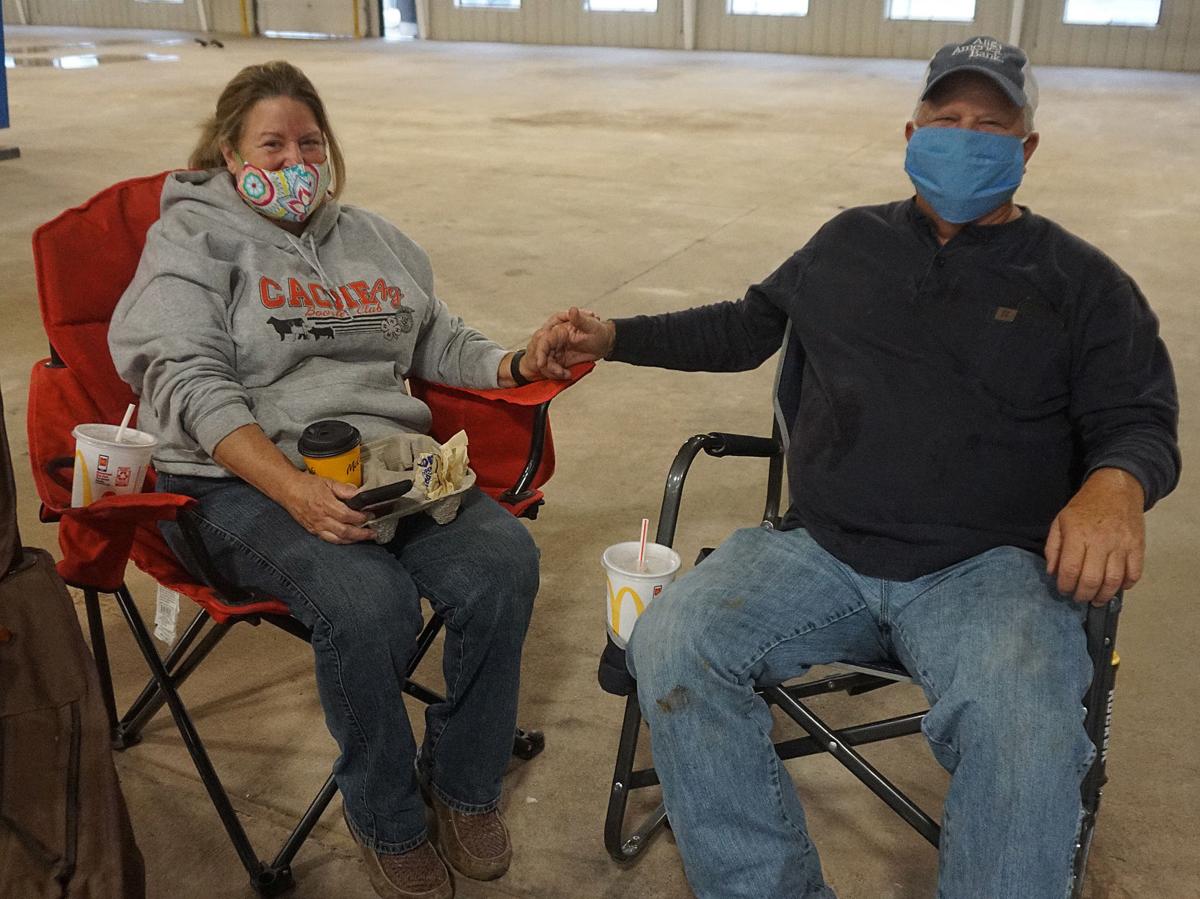 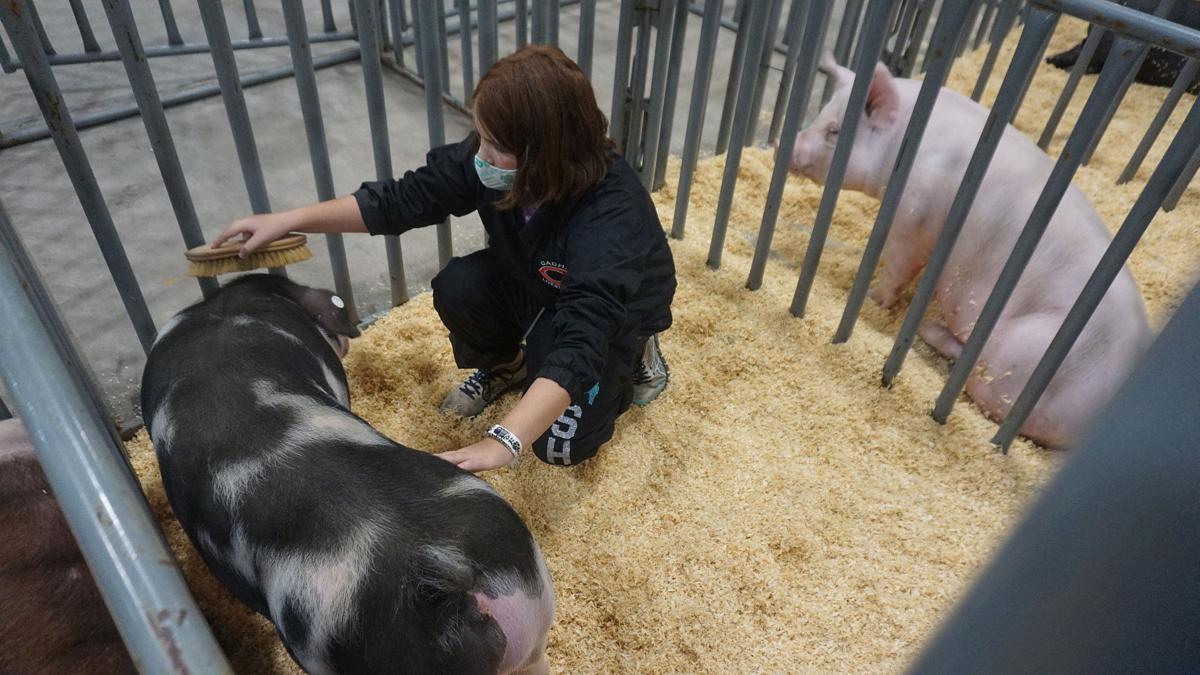 Cache fifth grader MacKenzie Milich, 10, grooms her pigs as they rest in their pen Wednesday inside the Expo Building. 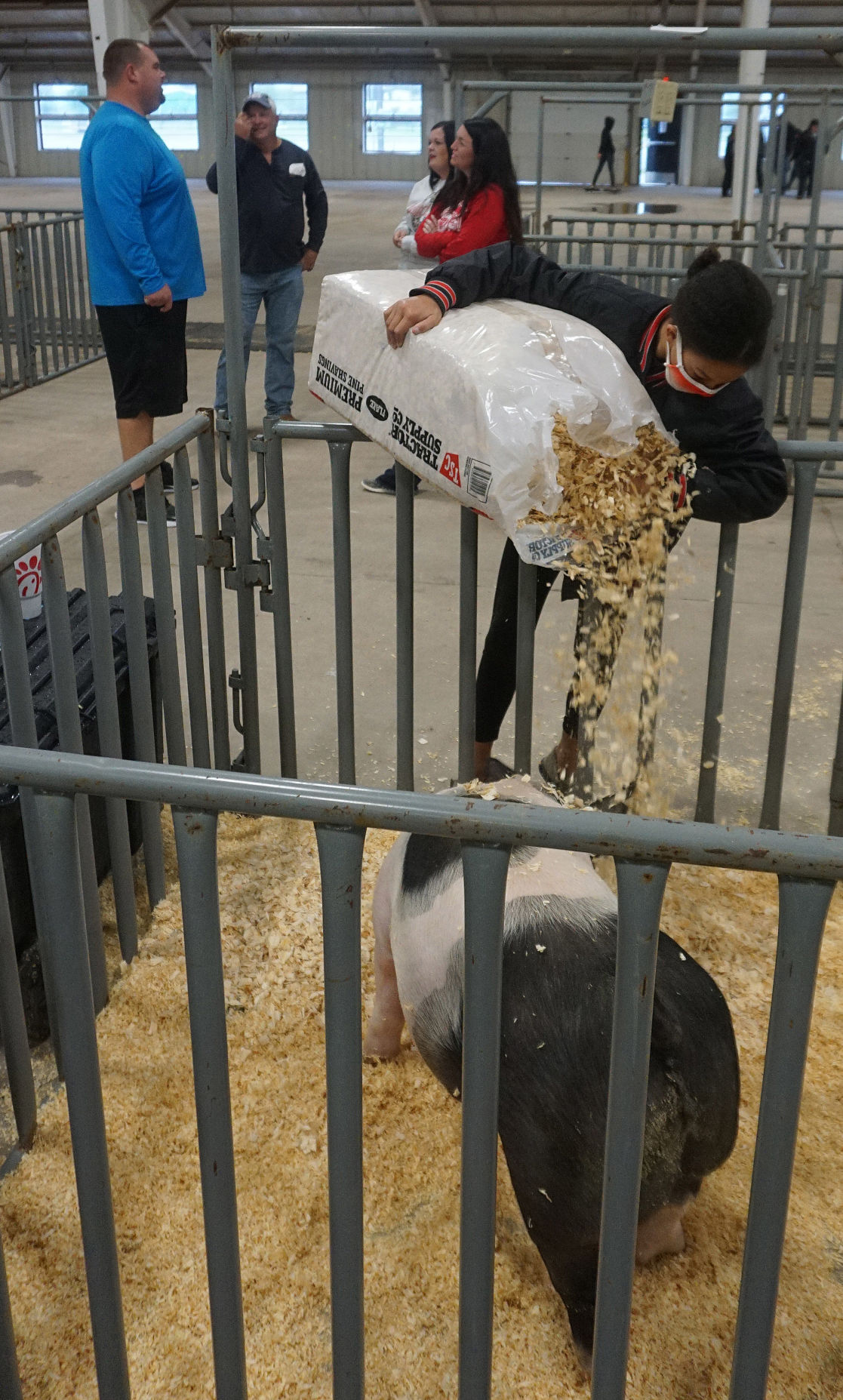 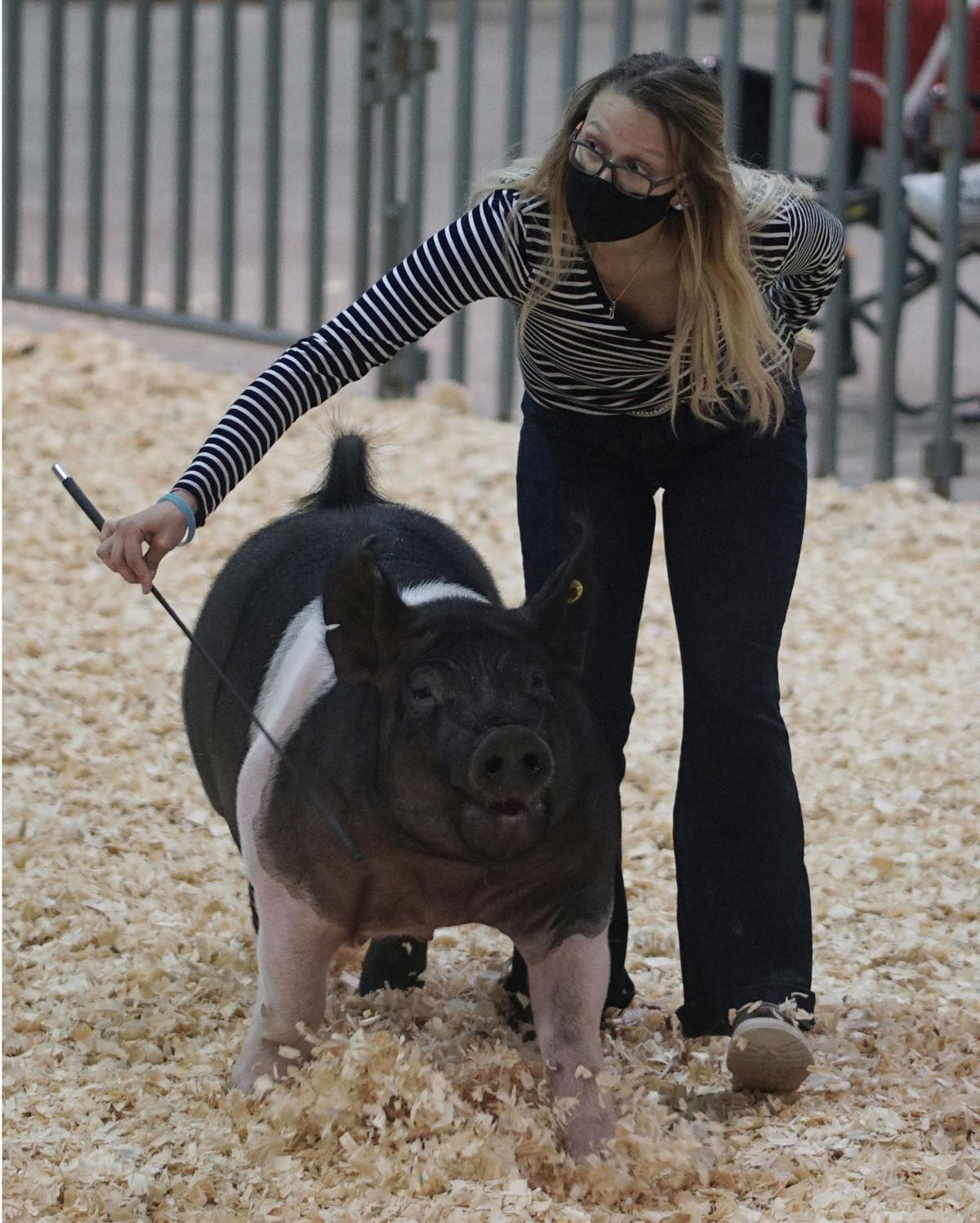 Madilynn Pierson, Indiahoma, gives the judge an intense stare as she walks her Crossbred gilt around the show ring during the Comanche County Free Fair on Wednesday.

Cache fifth grader MacKenzie Milich, 10, grooms her pigs as they rest in their pen Wednesday inside the Expo Building.

Madilynn Pierson, Indiahoma, gives the judge an intense stare as she walks her Crossbred gilt around the show ring during the Comanche County Free Fair on Wednesday.

Because of a certain microbe that’s much in the news, this year’s fair was scaled back to two days and consisted of stock shows only.

Organizers had entrants pre-register for the livestock shows so they could get an idea of what needed to be done in order to socially distance the exhibitors, according to Cache ag educator Pete Dempsey. Approximately 70 pigs were on the list.

Cache fifth grader Kinsley Deavours, 10, said she’s been looking forward to coming to the county fair for a long time. She’s had her pigs for a few months now. She’s raising four this year and brought three to the county show; the other one stayed home.

The three she selected to exhibit are a Crossbreed, a Poland China and a Yorkshire. She had no idea who was going to win, but said she feels like all three of her pigs deserve a blue ribbon.

To get them ready to show, she spent the morning brushing, blow-drying, unloading them from the trailer and walking them. Kinsley is the daughter of Megan and Chase Deavours, and they both came to watch her line up her pigs for the judge, Brandon Anderson of Texas.

This is her second year to compete at the county fair swine show. Last year she won breed champion for her Yorkshire and the junior showmanship trophy.

This is the second year for Cache High School sophomore Bella Cole, 15, to show pigs. Her mother, Julie Cole, showed when she was in high school, and she showed Bella the ropes. Her dad, Chad Cole, also showed livestock for a little bit.

Bella brought four animals to the swine show, a Crossbred gilt and three barrows, a Cross, a Duroc and a Hampshire. She got up at 6:15 a.m. Wednesday and had all four ready to show by 9 a.m., well in advance of the 11 a.m. start time.

“We woke up, went to the barn and fed,” she said. Then they loaded the pigs into the trailer.

She exercises her show animals every day, putting them outside and walking them around. They’re pretty well-behaved on the whole, but sometimes her Duroc will get scared because his ears are oversized and he can’t see what’s coming. If he hears a loud noise he takes off and takes Bella’s legs from underneath her.

“So he’ll knock me onto the ground sometimes,” she said.

The others don’t have that problem. She works with all of them a lot so that by the time they get into the arena with her they understand each other. Bella said she wants to go to state this year, and to do that she must first compete at the county level. She went last year.

“It was rough. It was my first year showing, so it was a scary experience,” she said. Now that she’s had one year under her belt, “I’m excited. I think it’ll be good. The pigs are better this year, too.”

The only difference she’s noticed about this year’s county fair is “just the masks, so far.” She likes having one because she thinks it’s fun, and she was looking forward to seeing more of her friends at the show later in the day.

Another Cache fifth grader, 10-year-old MacKenzie Milich, had her pigs tucked away in their pens inside the Expo Building and was busily brushing them before showtime. This is her second year to show. She learned about it from her dad, Michael Milich, a 2000 Eisenhower High School graduate who showed pigs for about five years.

“As soon as she got of age to join 4-H, I got her involved, and this is her fifth pig, these two, because they’re both hers,” he said.

MacKenzie introduced them as Molly, a 222-pound Hereford gilt, and Tonk, a 205-pound Spotted Poland China gilt. They were tiny piglets weighing 25-30 pounds when she got them about seven months ago, and she’s weighed them weekly to put down their gains in her record book. She feeds them twice a day, every day.

Tonk is an outdoor pig who doesn’t particularly want to go back to the barn.

They’ve both been in the show ring before, and MacKenzie said she’s pretty sure they know what’s going on.

“Molly just likes to run away,” she commented.

After this fair, she and her dad plan on taking her pigs to the show in Duncan and then to the Tulsa State Fair Sept. 17-21.

Here, in order of placement, are the results of the swine show as provided by Comanche County 4-H Educator Sharon Stuckey: