A ground crew made up of soldiers from C Battery, 5th Battalion, 5th Air Defense Artillery and other units keeps the battery commander's high-altitude balloon from touching the ground Friday at Dr. Charles E. Green Field. 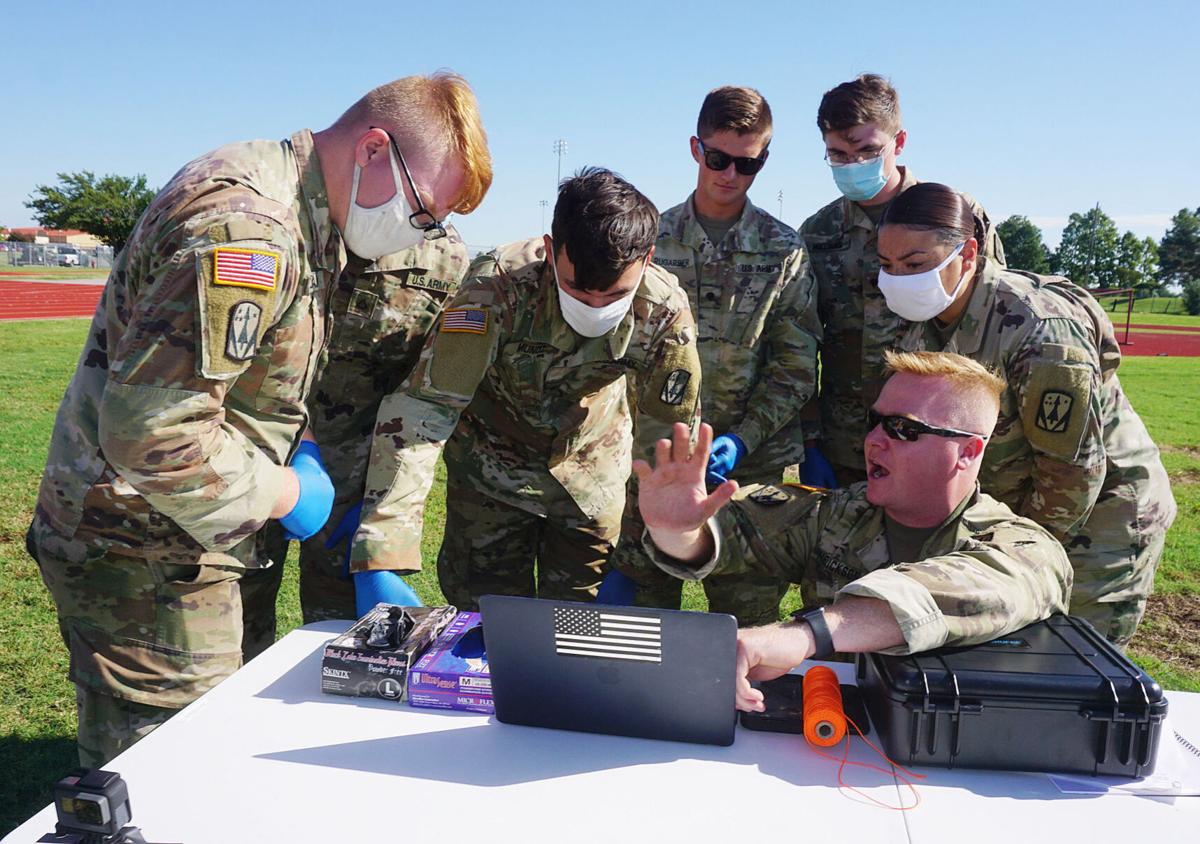 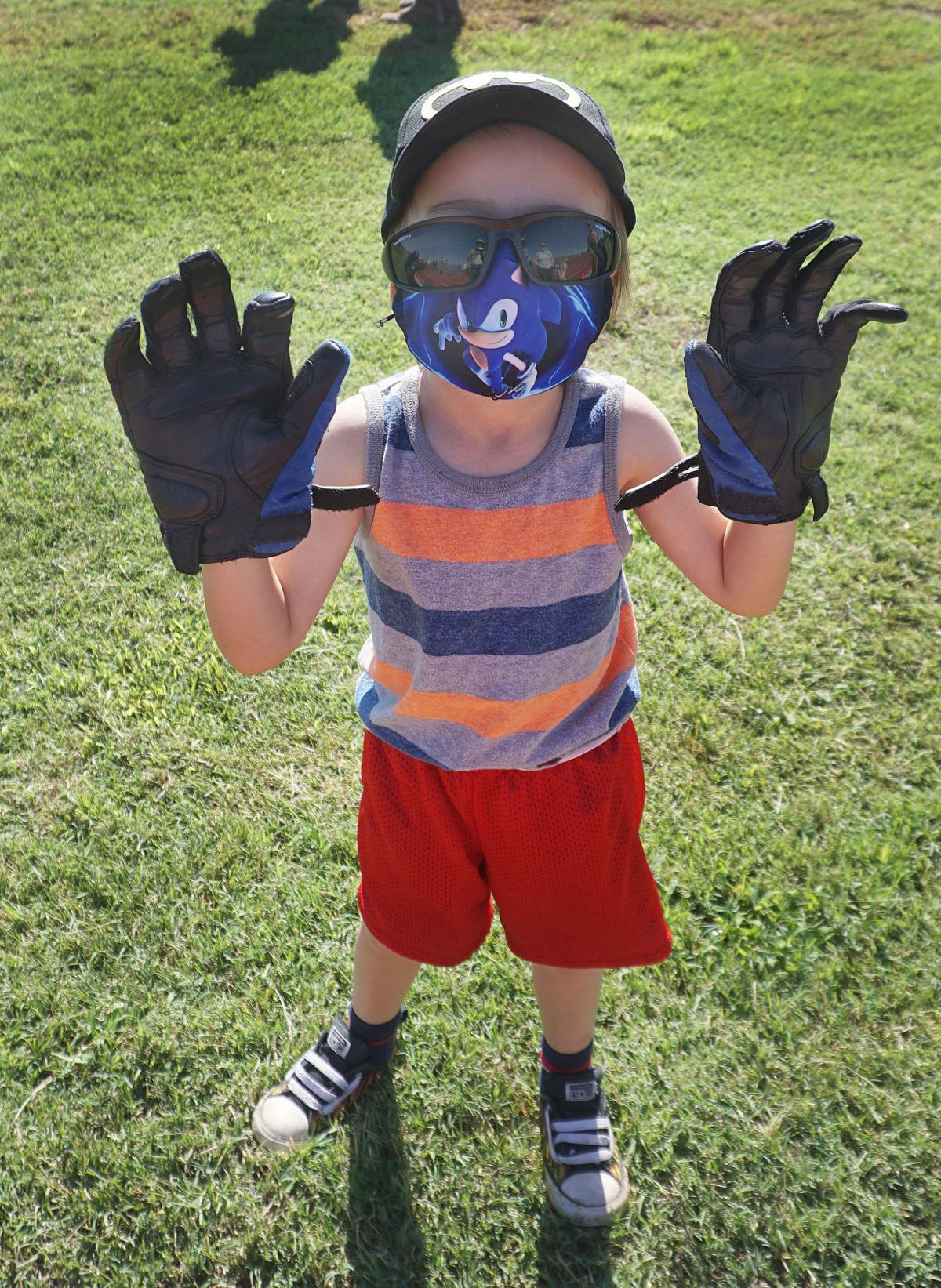 Andrew Torres has fun with his dad's motorbike gloves before the start of a high-altitude balloon launch by soldiers with the 31st Air Defense Artillery Brigade on Friday. 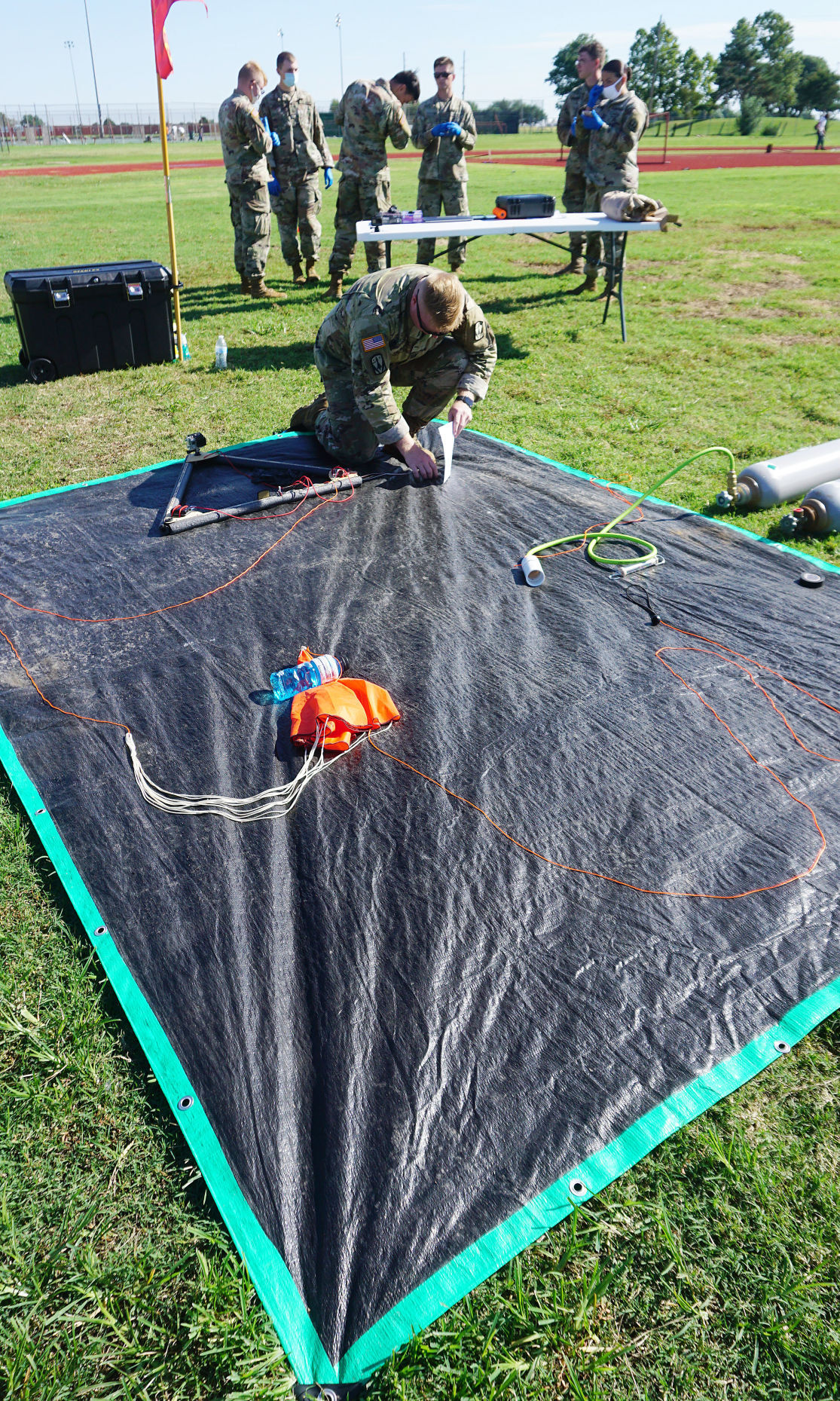 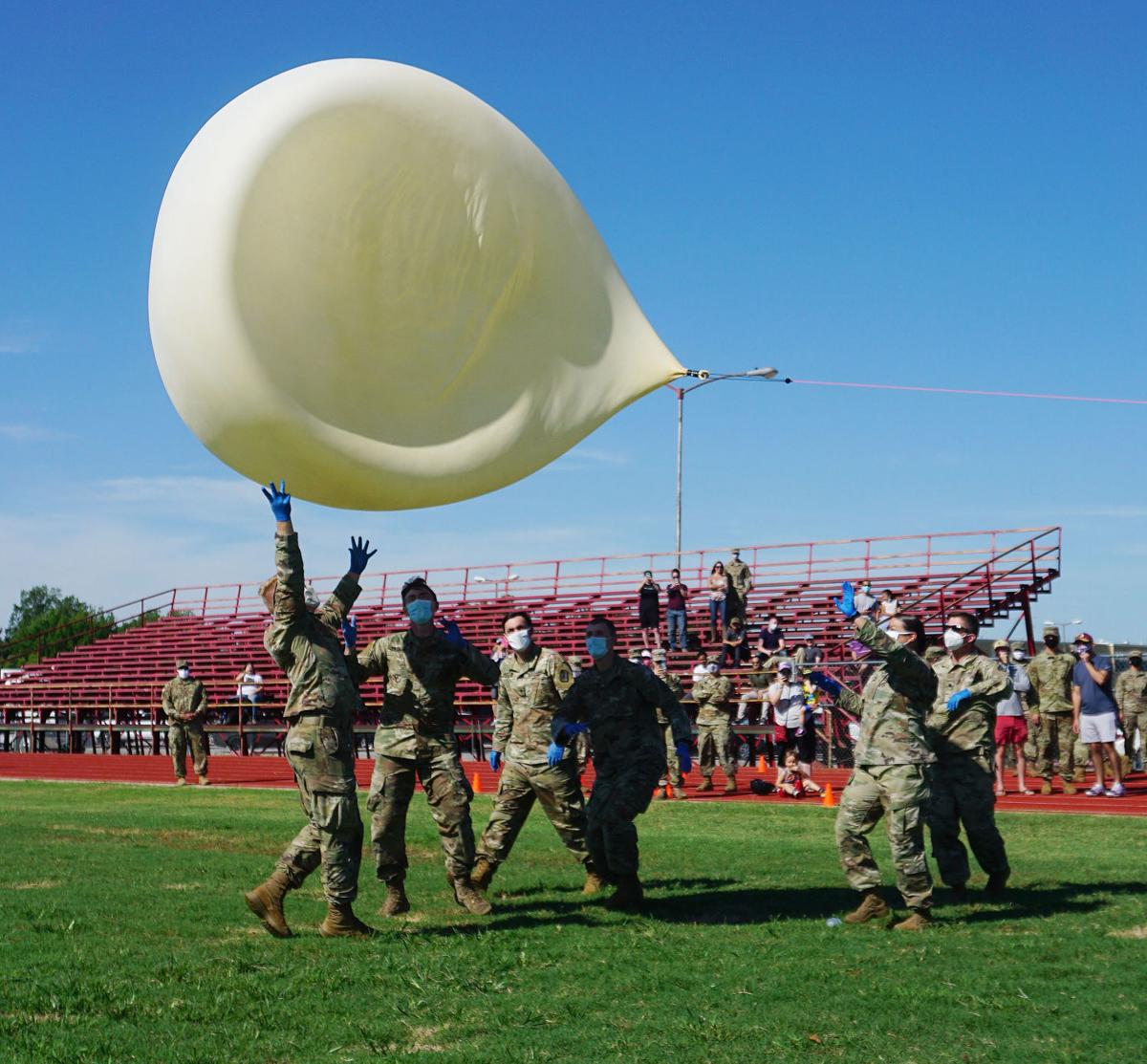 A ground crew made up of Fort Sill soldiers helps a high-altitude balloon get up, up and away at Friday’s launch from Dr. Charles E. Green Field east of Lawton High School.

A ground crew made up of soldiers from C Battery, 5th Battalion, 5th Air Defense Artillery and other units keeps the battery commander's high-altitude balloon from touching the ground Friday at Dr. Charles E. Green Field.

Andrew Torres has fun with his dad's motorbike gloves before the start of a high-altitude balloon launch by soldiers with the 31st Air Defense Artillery Brigade on Friday.

A ground crew made up of Fort Sill soldiers helps a high-altitude balloon get up, up and away at Friday’s launch from Dr. Charles E. Green Field east of Lawton High School.

High-altitude balloons are a personal hobby of Capt. Jordan Henrickson, commander of C Battery, 5th Battalion, 5th Air Defense Artillery, so he invited six soldiers from within and outside his battery to help him gas up the balloon and launch it.

“We selected soldiers that wanted to get some involvement with this. Some that want to branch out after the military into different hobbies like this, whether it’s college or launching their own balloons. So we took that handful and put them on the launch team so they’d get that experience,” the captain explained.

The last launch he did was in New Mexico while he was stationed at Fort Bliss, Texas, in 2018. He taught a science class made up of seventh and eighth graders for a week, and then the students helped him send up the balloon. The soldiers he served with at the time went with him to recover the payload.

Henrickson said he got into balloons while he was in college in 2013.

“I really just got bored, and started going on YouTube and procrastinating, and I stumbled across a video that showed the Earth’s curvature and the blackness of space. I thought that was really cool, and I thought that was maybe something from NASA and it wasn’t. It was from an amateur that put in the time, put in the funding, made their payload and then got a plan. They launched it and got that beautiful footage. And I said, ‘I want to do that.’ So three months later, on Veterans Day in 2013, I launched our first balloon from west-central Wisconsin.”

The payload he designed for Friday’s launch in Lawton mirrors that for the last five launches he’s done. It included a GoPro video camera, two Global Positioning System devices, a flight computer with sensors, two 31st ADA Brigade patches in honor of Col. Lisa Bartel’s Aug. 5 change of command, a U.S. flag and contact information for the battery commander so that if anyone found the balloon they could call Henrickson and let him know where to retrieve it.

The balloon that went up was one Henrickson bought himself for $480. It’s designed for one use only. It was filled with two tanks’ worth of helium – 160 cubic feet. As the balloon climbs higher and higher, the atmosphere grows thinner and thinner, and the diameter of the balloon expands to 60 feet. If the balloon hits an altitude of 130,000 feet it will burst, and then an orange parachute will deploy and bring the payload safely down to Earth.

Henrickson said they were going for 130,000 feet Friday. The highest he’s ever gotten on five previous launches was 116,000.

“So the goal was to get a bigger balloon, fill it with enough helium to get it to reach that altitude, burst and then come back down,” he said.

Henrickson’s team had to deal with a ground wind speed of 14-15 mph out of the north-northwest Friday. In scoping out the area beforehand, Henrickson was concerned about whether the balloon could clear the treetops on the south side of Ferris Avenue. So he decided to give the balloon a running start in hopes it would gain enough altitude to elude their branches.

With 20/20 hindsight, he wished he had moved the launching pad farther back, because the balloon snagged on a tree shortly after takeoff. For several long minutes the situation seemed doubtful, but the balloon did eventually manage to break free and continue its flight.

“We lost the GoPro and then one of the satellite trackers, but one is still on, so we’re able to track that and then go recover it,” said Henrickson. The still-functioning GoPro was recovered from a tree, so he expected to have footage of the balloon ascending into the tree.

The GPS tracker works up to 30,000 feet and then goes into blackout, but it will resume tracking when it descends below that altitude. The remaining tracker can go for up to 450 kilometers, so the team can see where the balloon is going minute by minute for that long.

An audio beacon powered by a 9-volt battery allows the recovery team to find the balloon by listening for its beeps. Henrickson said he expected the balloon to be aloft for approximately eight hours and land somewhere near Paducah, Texas, about 30-40 miles west of Wichita Falls. Somewhere in the vicinity of Geronimo he expected it to get into a jet stream above 100,000 feet and go east, then climb higher and get into a different jet stream that would take it west.

After it pops, the parachute’s descent rate should take the payload to the ground in about 45 minutes, so the recovery team should have been able to get it about 6:30-7 p.m. Friday.

Henrickson praised the six-soldier ground crew for doing a phenomenal job. The wind speed tossed the balloon around, and that’s why he asked for their help in stabilizing it.

“I’m extremely proud of them,” he said.

Crewmembers did a couple practice runs earlier in the week to learn what was expected of them.

“We just came out here to do something fun and build morale within the unit and the battery,” crewmember Sgt. Angelica Carona said.

She said her commander was hoping this balloon would attain the state record for the highest altitude ever reached by a balloon – “but we’ll see if it gets that high.”

“Yesterday we did a dry run. We practiced the majority of the day and then today we did it before everyone came out,” Carona said.

The NCO said she had never done anything like this before, and it felt “really cool, actually. I’m kind of a nerd in a way. I like to do things like this, just seeing things happen in science. So I was very proud to jump on the team with them.”

Spc. Blaise Harvilla said the launch meant a whole lot to him because he had never gotten to do anything like it.

“It was definitely something unique and amazing,” he said.

The photo captions that go with this story have been corrected to reflect the correct name of the Charles E. Green Field at Lawton High School.