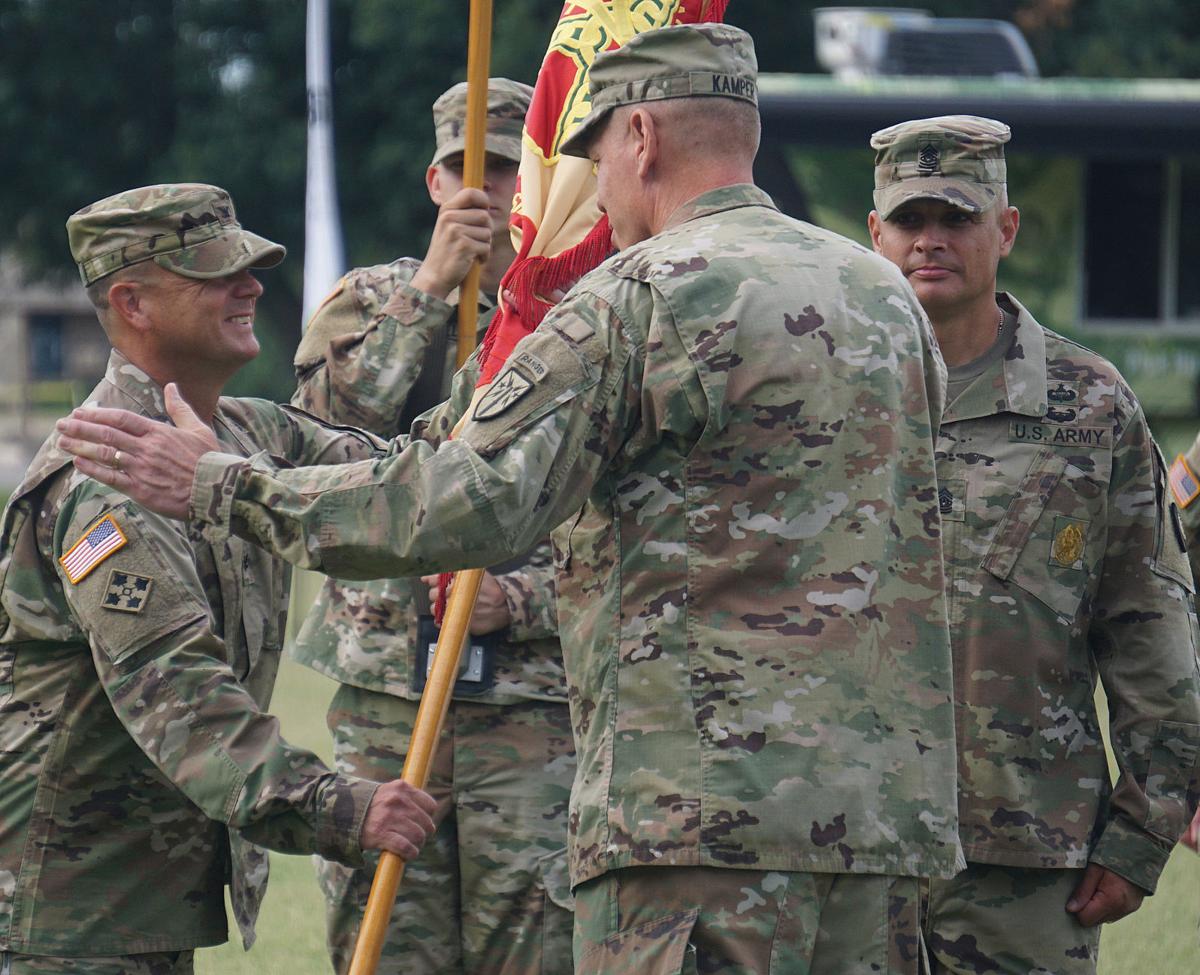 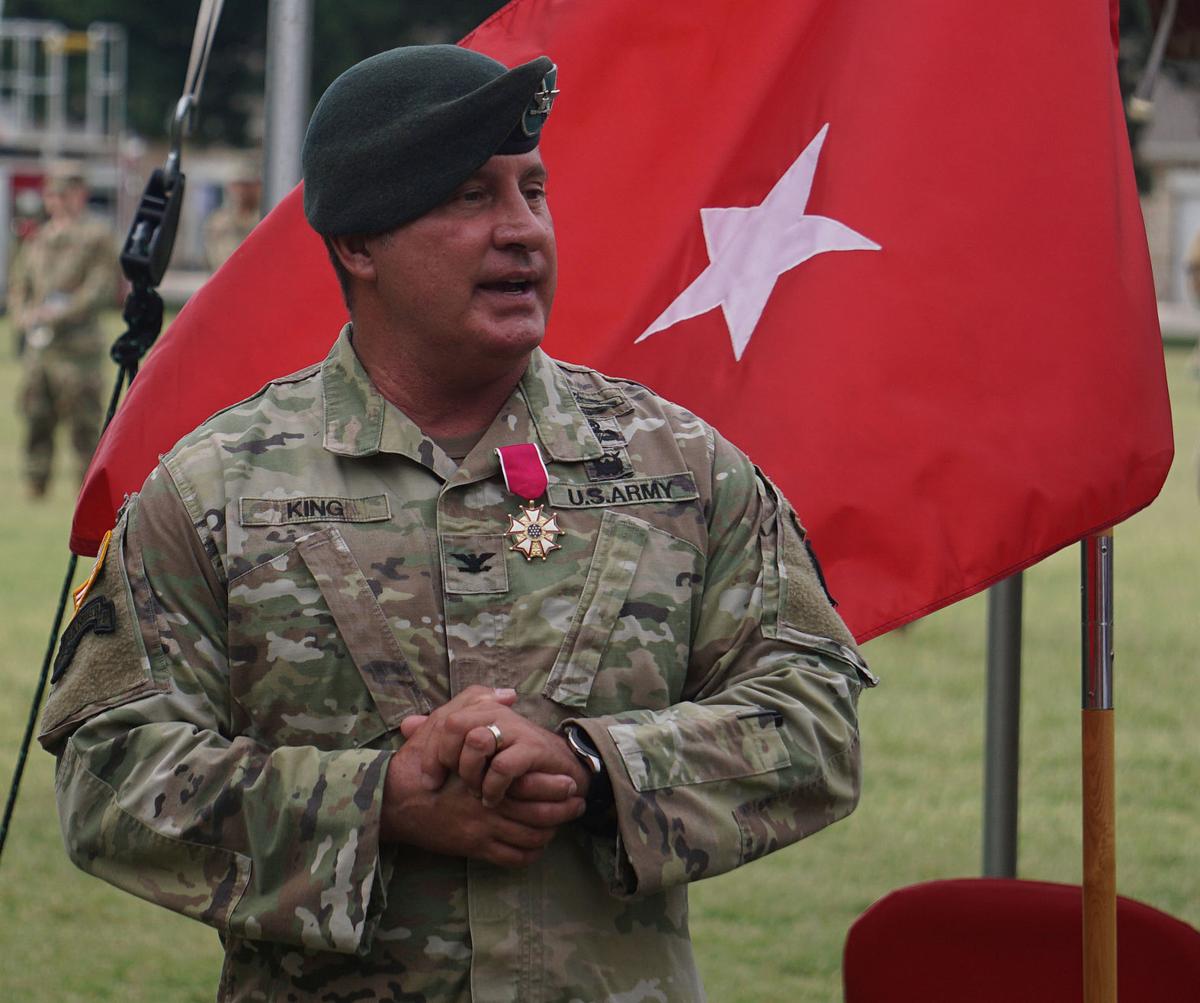 Col. Don King’s final act as Fort Sill Garrison Commander was to make sure someone sang “The Green Berets” at his change of command ceremony Monday.

At an awards presentation prior to the ceremony, Maj. Gen. Kenneth Kamper, commanding general of the Fires Center of Excellence and Fort Sill, presented King’s wife Rika with a Public Service Commendation Medal and the Order of the Red Legacy for her volunteerism and her watchful eye that made sure things ran smoothly. Among other things, she was the Patriot Spouses Club adviser for a year and active in Growing Spouses Army Strong, the Fort Sill USO Center and the Kindness Society. King himself was awarded the Legion of Merit for exceptionally meritorious service.

King said after the ceremony that he and his wife are “over the moon” about his next assignment as chief of staff for Special Operations Command – Europe in Stuttgart, Germany. While he has deployed before, this will be the first overseas duty station he’s had in an Army career of nearly 35 years.

He will take over on Aug. 21, and said he looks forward to getting out there with his family and getting back to the operational force. One of their sons, Dakota, is a first lieutenant in the 101st Airborne Division and their other son, Tyler, is currently living in Spain.

“My last two years here as garrison commander has been phenomenal,” King said. “It went much faster than I thought it would. I think the best part of this, the highlight of my time here, was the relationships not only with the organizations on the installation but the Lawton community ...

“I will tell you from day one the people that we met in Lawton made the difference. They were friendly, they were kind, and we’re going to be sad to leave here because of the community itself, because of how much they do reach out to service members here and really look after them,” King said.

The one thing that saddens him is that two mainstays of the garrison team, secretary Bev Hopkins and deputy garrison commander Audie Snodgrass, are retiring.

“I’m grateful that they stayed on with me for this year because a lot of the team members that I had have a lot of experience,” King said.

He noted that the garrison team has one of the toughest missions on the installation and that’s to make sure everything runs smoothly.

“My best memories will be with the garrison team and everything we were able to do, especially during a very tense time in our country, especially with COVID. We did everything we could to make our time here on Fort Sill enjoyable, even through the COVID environment. We really tried hard,” he said.

The new Fort Sill Garrison Commander, Col. Rhett Taylor, is a field artilleryman by trade. He enlisted in the Indiana National Guard in 1991 and earned his commission in 1997 through the Reserve Officers Training Corps.

He returned to Fort Sill in 2001 for the Captains Career Course and was then assigned to Headquarters, 214th Field Artillery Brigade here. As the brigade fire control officer he deployed with them in support of the initial invasion of Iraq during Operation Iraqi Freedom in 2003.

Upon his return he commanded B Battery, 1st Battalion, 14th Field Artillery from 2003 to 2005. He came back to Fort Sill about a year ago to serve as operations officer for the Fires Center of Excellence and Fort Sill. King said that job was good training for the garrison command, as he and Taylor worked together on the same projects.

“He got to see a lot of what I was doing and got to be a part of it,” King said. “He’s a great supporter, so it was nice to have him here pre-positioned. It gave him a good bird’s-eye view of what the garrison does, but it also gave him a great opportunity to see what was important to the installation and what he should focus on.”

Taylor said what he’s most looking forward to as garrison commander is “the people.”

“In my previous job I worked closely with the garrison. They’re just great people, and I’m excited to be part of that team and the Lawton-Fort Sill community,” he said.

Asked what he brings to the table as the city manager of Fort Sill, Taylor cited the skills to build a team, the ability to stay calm under pressure and his sense of humor.

“It’s not always how you sell the problem, it’s how you deal with the problem. I think the personality has a lot to do with that,” he said.

Taylor and his wife, Amy, have two daughters, Natalie, a senior studying recreational therapy at Central Michigan University, and Lauren, a freshman at Indiana University/Purdue University at Indianapolis.

Filling in for the 77th Army Band while its members are on annual leave was the 395th U.S. Army Reserve Band based in Mustang.