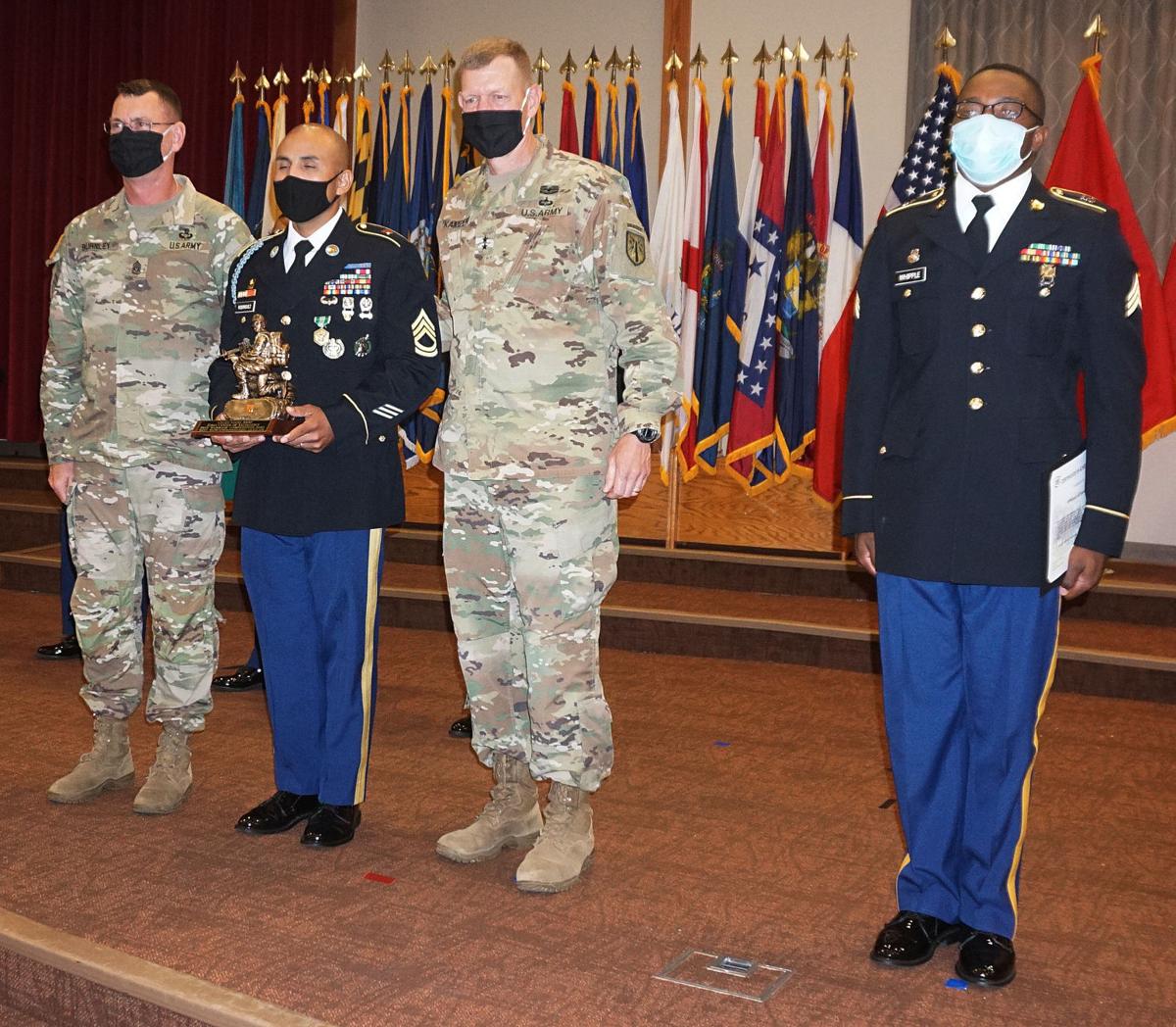 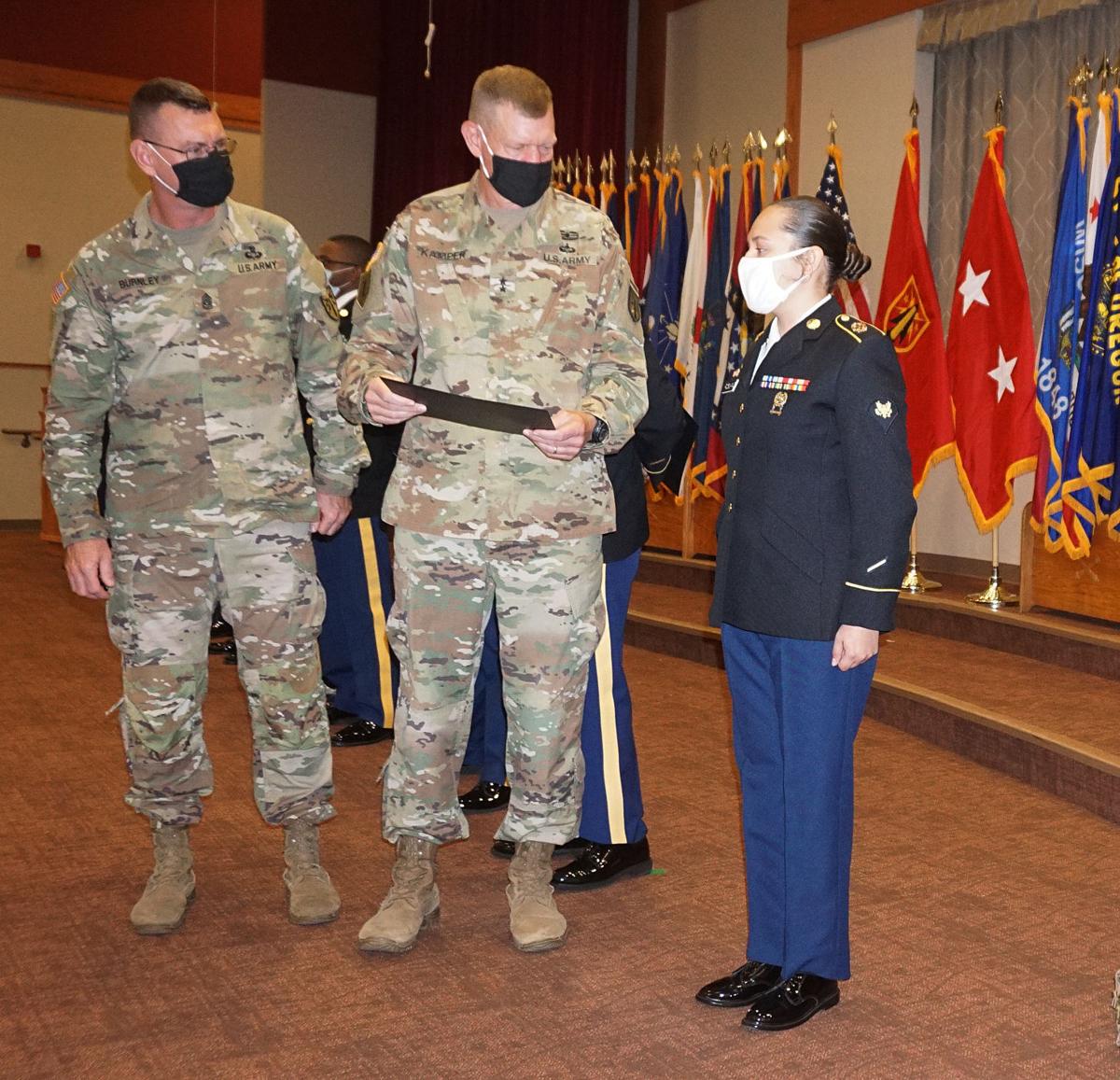 Maj. Gen. Ken Kamper, commanding general of the Fires Center of Excellence and Fort Sill, gets ready to hand a certificate of achievement to the only female soldier in this year’s Best Warrior Competition, Spc. Diana Mandujano-Poblano, as Command Sgt. Maj. Steven Burnley looks on.

Maj. Gen. Ken Kamper, commanding general of the Fires Center of Excellence and Fort Sill, gets ready to hand a certificate of achievement to the only female soldier in this year’s Best Warrior Competition, Spc. Diana Mandujano-Poblano, as Command Sgt. Maj. Steven Burnley looks on.

Sgt. Alton Whipple upheld the honor of junior enlisted soldiers from 95th Adjutant General (Reception) Battalion by besting all comers in both the 434th FA Brigade and FCoE Best Warrior Competitions. At Friday’s ceremony to announce the winners, his wife, Yeinna Kemp, and his whole battalion showed up to cheer him on.

The competition included such tasks as a 12-mile foot march carrying a load of 55 pounds, the six-event Army Combat Fitness Test, a rifle marksmanship event that included zeroing their weapon and a stressed qualification shoot, land navigation and a virtual board appearance where their technical and tactical knowledge was applied to situation questions.

“It shows that all my effort, my willingness and my drive is paying off,” he said.

He will remain here until the TRADOC Best Warrior Competition, and he’s awaiting guidance on when that will happen and what the format may be. Rodriguez has competed once before at the TRADOC level, when he represented Fort Sill at the next level of the 2019 Drill Sergeant of the Year competition.

Rodriguez said he believed the TRADOC DSoY competition was harder than the one here “because you have to be a lot better at remembering things, like an entire page with knowledge that you have to recite word by word, basically.”

Rodriguez said he “absolutely” prefers the physical aspect of these competitions – “any time of the week.”

Asked what it took to win FCoE and Fort Sill Best Warrior at the NCO level, Rodriguez said, “Focus, and not getting complacent. I’ve always done well in physical things, and not allowing for me to get into that mentality that I’m going to win regardless, always making sure that I continue to push myself.”

Rodriguez has served in the Army 11 years, and he’s still looking for new worlds to conquer. He was recently selected to be a warrant officer for the Field Artillery branch. Up to this point, his branch has been Infantry, where his only connection to field artillery was calling for fire. Now he’ll be learning about howitzers from the ground up. He will be attending Warrant Officer School in June 2021.

Making the switch gives him an opportunity and something new and exciting to learn, said Rodriguez, who’s eager to start learning and building his sphere of knowledge.

Whipple said he feels great about winning the trophy. He works in the personnel section of 95th AG.

What it took for him to win Best Warrior in the junior enlisted division was “a whole lot of training, studying for the board, having mental discipline, like pushing through especially with the ruck march. At the last two miles it becomes very hard, and it’s just, how bad do you want it?”

Whipple said the 12-mile ruck march was the toughest physical event for him. The toughest mentally was the virtual board exam, because it was a different environment.

Whipple felt challenged to enter the competition because the previous soldiers who’ve gone before the board have been from his unit, and he wanted to try to surpass them.

After going through 434th FA Brigade’s Best Warrior Competition, Whipple said it was hard to go through the competition a second time. There were more events in the earlier competition, but this time around it was based more on physical strength and mental capacity.

Whipple said he will be doing a whole lot of studying to get ready for the TRADOC competition because it will have another virtual board. Whipple said he and Rodriguez got together before the FCoE Best Warrior Competition to work on zeroing their weapons and shooting, so they will probably be working together to get ready for the TRADOC-level contest.

Maj. Gen. Ken Kamper, commanding general of the FCoE and Fort Sill, and Command Sgt. Maj. Steven Burnley presented each of the 10 entrants a certificate of achievement after visiting with each of them personally. He then gave them coins of excellence with the tongue-in-cheek proviso that they give them back if their pursuit of excellence ever ceases.