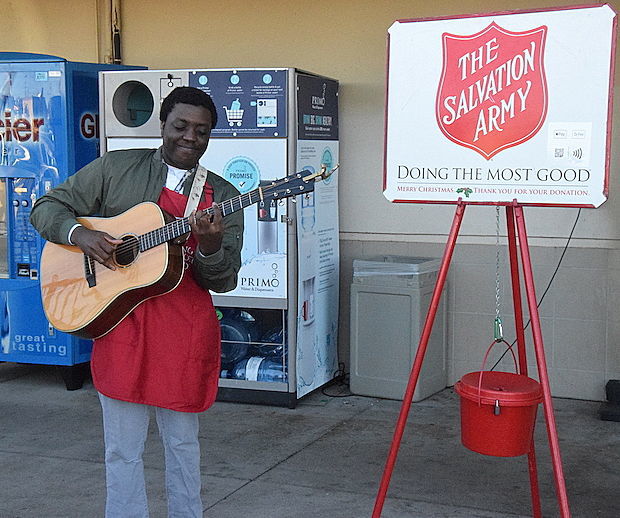 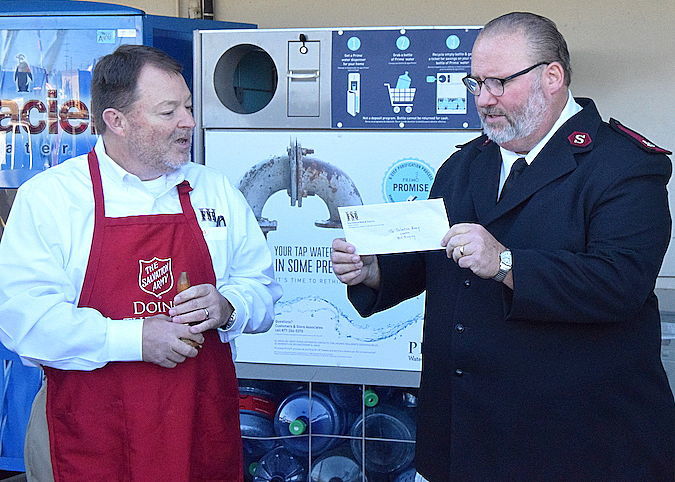 Outside the westside Country Mart, 6734 Cache Road, several people gathered around the red frame and dangling bucket that is a welcome sign to the season for many who wish to give to those in need.

Salvation Army Major David Robinson said with a goal of raising $150,000 this year, the organization is tasked with doing so with a shorter schedule than many years.

Due to the late-November date for Thanksgiving this year (Nov. 28) it’s imperative to get the word out about the locations hosting the kettles for now. Especially when it’s on a six-day shorter schedule for 2019. Robinson said those days amount to about a $14,000 shortage for average donations. That is, unless the public picks up the pace.

“It’s really important for us,” Robinson said. “The need is going up and the days are getting shorter.”

Although the stand-up donation spots are now open outside the city’s Country Mart stores, Big Lots and the four entrances of Central Mall, bells won’t begin ringing outside the Lawton Walmart and Sam’s stores until Nov. 29, due to the company’s policy that they can’t set up until the day after Thanksgiving.

“I’m thankful we’re allowed to set up here,” Robinson said. “It’s very important we get started on the right foot.“

The Salvation Army, an international movement, provides much needed help for children and families throughout Comanche County. Robinson said the money raised during the Red Kettle campaign is used to fund its projects throughout the year. From operating a shelter, to assisting families during the holidays and in fulfilling back-to-school needs to funding the Boys and Girls Clubs, it makes a difference in many lives.

Robinson said the needs are greater this year than in others.

Nathan Herbert, chief financial officer for First National Bank, offered a $500 check from the bank to Robinson to help make a dent in the ambitious fundraising goal. After moving here last winter, he said it was easy to recognize the need by the Salvation Army and to find a way to do something.

“We as an organization are interested in contributing to our communities,” he said. “We’re thankful for the Salvation Army.”

Salvation Army Red Kettle stands now come with a feature that allows donors to give through QR Code and GooglePlay on their smart phones.

Robinson said it’s another way for people to become involved. And if you’re involved with the organization, he said, you’re more likely to be compelled to assist to your fullest.

Donning the red apron and with his guitar in hand, Bannister Chaava used his musical talents to attract donations to the kettle in front of Country Mart. He said he and his family have been involved for at least 24 years — basically since he was a baby.

Robinson praised the young artist and fellow with the Salvation Army for his heart, both for the community and for music. He exemplified the many ways effort makes a difference. Others can volunteer and do their part, he said.

“He’s a soldier at the Salvation Army,” Robinson said. “I’m so thankful he came out today to play his music and help our cause.”