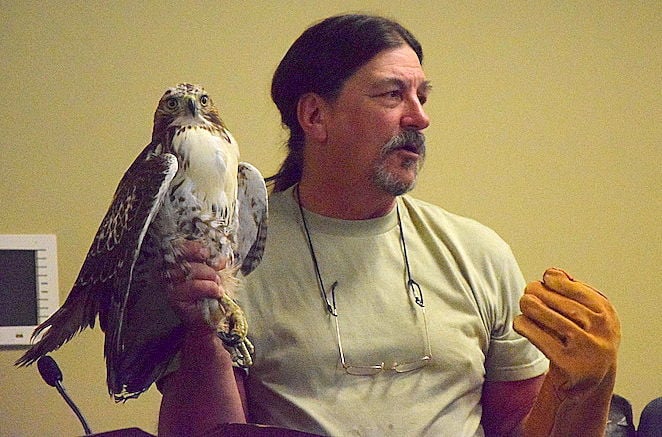 Wally Breaden shares insights into the young red tail hawk he’s been nursing to health after finding it with a broken wing earlier this year. The hawk will gain its famous red tail feathers after it grows to maturity. 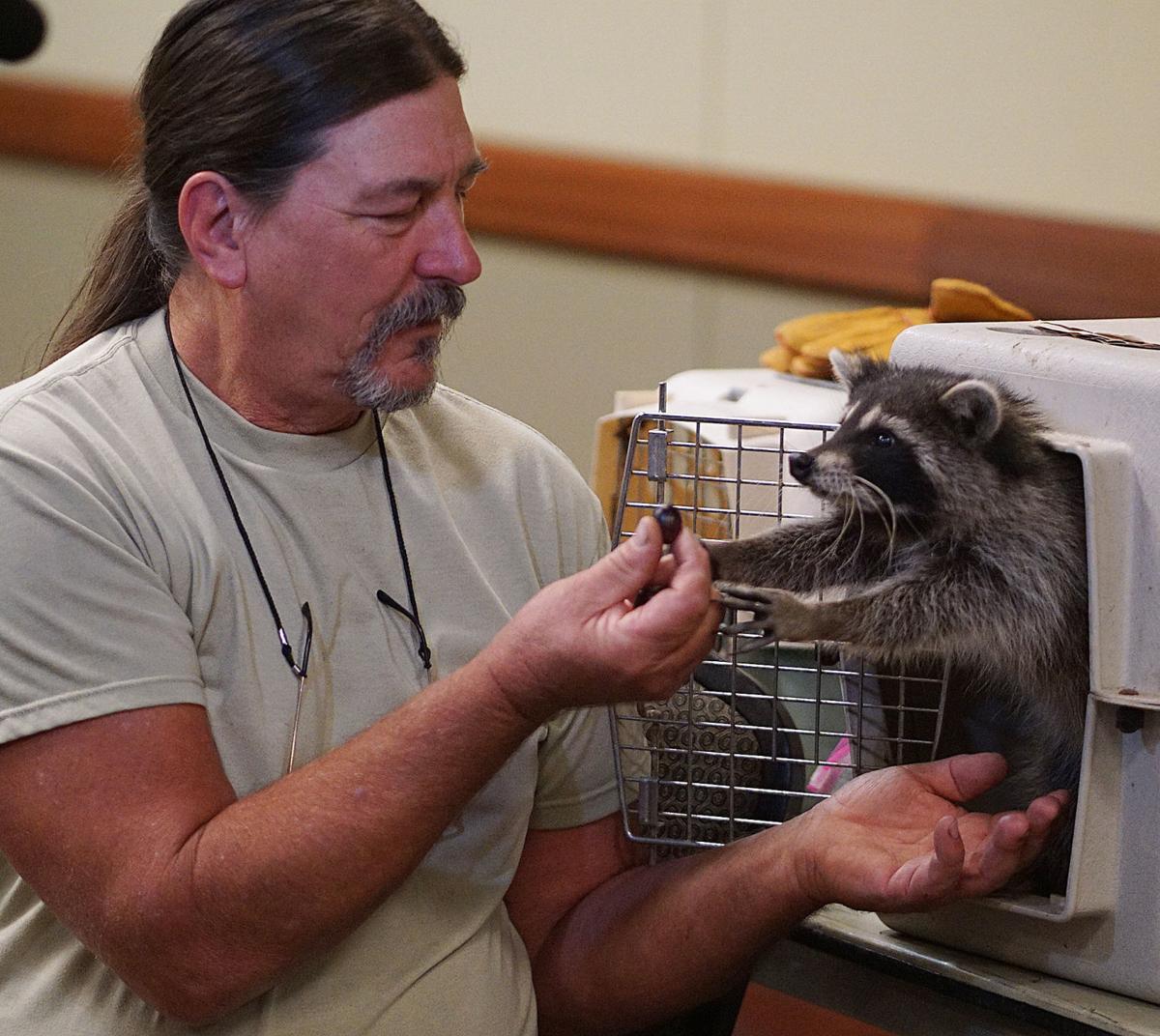 Wally Breaden lures his young raccoon rescue out of a carrier and into the limelight Thursday for an animal rehabilitation workshop at Cameron University’s CETES Center.

Wally Breaden shares insights into the young red tail hawk he’s been nursing to health after finding it with a broken wing earlier this year. The hawk will gain its famous red tail feathers after it grows to maturity.

Wally Breaden lures his young raccoon rescue out of a carrier and into the limelight Thursday for an animal rehabilitation workshop at Cameron University’s CETES Center.

When Wally Breaden begins talking about his wildlife rescue efforts, he speaks with passion.

He also speaks about common and uncommon sense when it comes to the nature of the beasts under his care at Breaden Wildlife Rehab. It’s love’s labor that beats in his heart for these beasts of the wild.

“It’s not a job for the faint of heart,” he said. “I hope to continue this for years to come.”

Almost every day, and often at any time of the night since 1973, Breaden has been on call to come to the rescue of injured wildlife, be it a squirrel, an opossum, a buzzard or deer. If it roams free and is hurt, he’s the man to see.

On Thursday, Breaden spoke to Cameron University students who attended his Animal Rehab Workshop at the CETES Center on campus. He brought along a raccoon, a squirrel, a red tail hawk and a black buzzard that are under his care to educate the audience. That’s as much a part of his job as rehabilitation.

“Each animal is different, just like you and I,” Breaden said. “I’m here to educate so that people have a better understanding of the animals and why they do what they do.”

A 6-month-old raccoon was brought out from his carrier and clutched Breaden with the combination of a wily toddler and a persnickety cat. He pulled his hair back into a ponytail for safety and, sometimes comically, he had to continually grapple with the dexterous little guy to keep his T-shirt intact and his glasses on his face.

Although they’re as cute as can be, the notorious “trash panda,” as the raccoon is often called, can be “extremely dangerous,” Breaden said. They’re not so bad up until 1-year-old but after that, all bets are off, he said.

“I tell people I would rather be attacked by 100 opossums than one raccoon,” Breaden said. “They can do serious damage.”

“These are wild animals, even if you get them from a breeder,” he said, “how wild they get depends on the animals themselves.”

Because the raccoon came to Breaden at a young age, there’s a good possibility it won’t be able to readjust to life in the wild. He said if that’s the case, he’ll most likely become an ambassador at the Medicine Park Aquarium.

A small squirrel emerged from his carrier after Breaden did some digging around. The juvenile rodent was wrapped in a T-shirt and appeared shy. He said they’re even harder to handle than the raccoons.

“They are fun, but they are destructive,” he said.

Squirrels are notorious for making their way into homes and taking up lodging in attics. Between chewing into the woodwork to defecating on the flooring causing rot, they can cause home hazards.

Breaden said this young squirrel won’t be released until spring at the earliest. It had fallen from a tree while still a “pink” infant. It’s one of at least 20 squirrels he’s nursed to health so far this year.

The animal rehab is funded through donations, Breaden said. Along with financial donations, he has an agreement with Lawton police to be called when a downed deer and other roadkill is found. They make for a perfect food source with some of the feathered visitors to the workshop he brought to Cameron.

To be able to continue the cycle of life for these wild creatures and to keep them ready for life on their own, Breaden said he tries not to name the animals. It helps resist his attachment to the animals as well as human imprinting on them.

The interaction with the animals and the students provides Breaden the perfect opportunity to enlighten the public. He said conducting education programs provides a great appreciation across the board.

“I hope people will have a better understanding of the animals and why they do what they do,” he said.

LAWTON, OK — How to contact Breaden Animal Rehab with injured wildlife or to make donations.