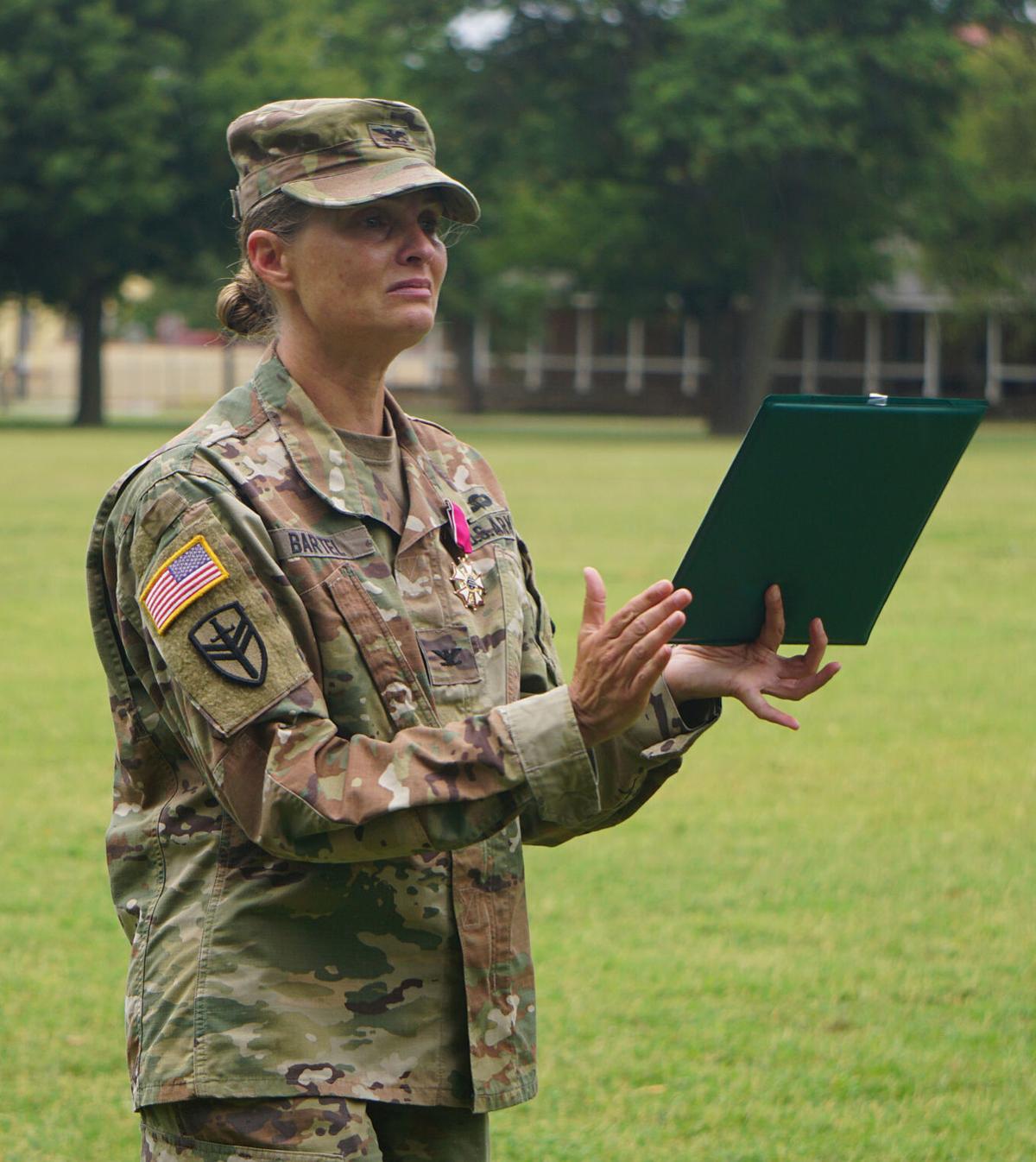 Col. Lisa M. Bartel, outgoing commander of the 31st Air Defense Artillery Brigade, applauds the troops for their performance over the past two years shortly after she received the Legion of Merit Award Wednesday. 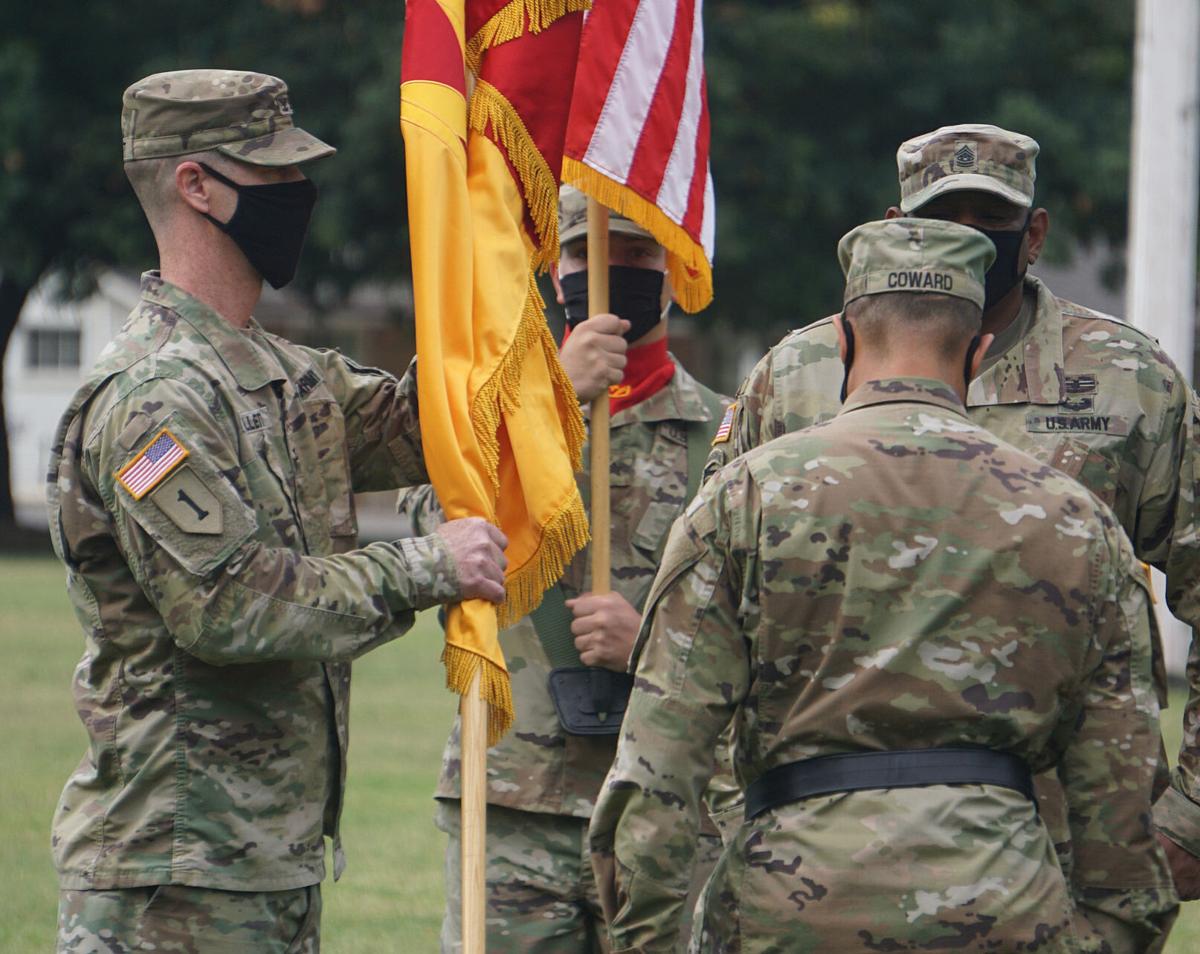 Col. Lisa M. Bartel, outgoing commander of the 31st Air Defense Artillery Brigade, applauds the troops for their performance over the past two years shortly after she received the Legion of Merit Award Wednesday.

After two extremely busy years in command of 31st Air Defense Artillery Brigade, Col. Lisa M. Bartel will spend the rest of August out-processing as she prepares for her next big challenge in the nation’s newest military service.

She will report to the Pentagon by the beginning of September to serve as executive officer for the vice chief of operations in the U.S. Space Force, which was recently stood up under the auspices of the U.S. Air Force. Her next boss will be an Air Force three-star general, but she will still wear the Army uniform in her new job.

In order to get accepted for the Space Force, Bartel went through a selection process. Human Resources Command selects files of people they think would be the best fit for positions it needs to fill, and then applicants have to go through a series of interviews in order to be considered.

“It’s very competitive, so I’m not sure what I said that got me the job, but I’m looking forward to it. It’ll be pretty exciting,” she said.

Bartel received congratulations from well-wishers by the score at the close of the Archer Brigade’s change of command ceremony Wednesday.

“It’s not for me,” she insisted while applauding the troops. “The medal is just a representation of what all the soldiers did. I’m the one they put it on, but really it’s a representation of all of their success and all their achievements and their hard work.”

“The Archer Brigade had quite the ride over the last two years,” Coward would say later during the change of command ceremony. “Col. Bartel and her team were critical to the changes we’ve seen in (U.S. Central Command area of responsibility) since 2018. She deployed two days after she took command and was saddled with arguably one of the toughest jobs we’ve had to do in a long time, and that is the theater draw-down.”

“As we continued to expand and adapt to new adversary techniques and capabilities, 31st Brigade this last winter supported our rapid expansion into Iraq by integrating ADA’s weapons systems – Patriot, C-RAM (Counter Rocket, Artillery and Mortar) and SHORAD (short-range air defense) – in a way that we haven’t done before or in a very long time.

3-2 ADA sprinted through modernization to generate combat power, and its soldiers just deployed again after only 17 months of being at home station, he noted.

“The hard work, the innovation, the resilience this brigade has shown over the last two years – it’s incredible. And that is leadership. Lisa had a hard road, the 31st Brigade had a hard road … She went the extra mile to make sure we could meet the ADA mission,” Coward said.

Bartel relinquished command to Col. Judson Gillette, who said he feels humbled and privileged to be given this command. Although this is his first assignment at Fort Sill, Gillette is no stranger to the 31st ADA Brigade.

Upon completing Captains’ Career Course in 2001, he took command of Delta Battery, 3rd Battalion, 2nd ADA, 31st ADA Brigade when its home station was at Fort Bliss, Texas. In 2002 he deployed his battery to Riyadh, Saudi Arabia, in support of Operation Southern Watch.

Upon his return, Gillett was assigned as the 31st ADA Brigade planner and in 2003 he deployed to Saudi Arabia in support of the first rotation of Operation Iraqi Freedom.

After many deployments and a couple of tours with university ROTC programs, Gillett returned to the 31st ADA Brigade in 2015 to command 5th Battalion, 5th ADA when it was still home-stationed at Joint Base Lewis-McChord, Wash. In that capacity he conducted a no-notice deployment to Iraq in support of Operation Inherent Resolve where 5-5 ADA established the first two Counter Rocket, Artillery and Mortar sites in Iraq since the previous withdrawal of U.S. troops. Gillett redeployed in March 2016 and immediately began preparations for another deployment to both Iraq and Afghanistan in the fall of 2016.

Bartel noted that her successor served as Coward’s chief of staff at the brigade’s higher headquarters, so he completely understands the dynamics of 31st ADA Brigade’s mission.

Gillett said the operations tempo for air defense continues to be very high, one of the highest OPTEMPOs of any of the Army branches, “but I think the soldiers really appreciate and understand the mission of what we do. And as long as we provide the right leadership and support the families and the soldiers, the OPTEMPO is okay.”

Gillett said he’s excited to be here and he’s ready to get after it. He brings with him his wife, Julie; their daughter, Morgan, and their son, McKean.