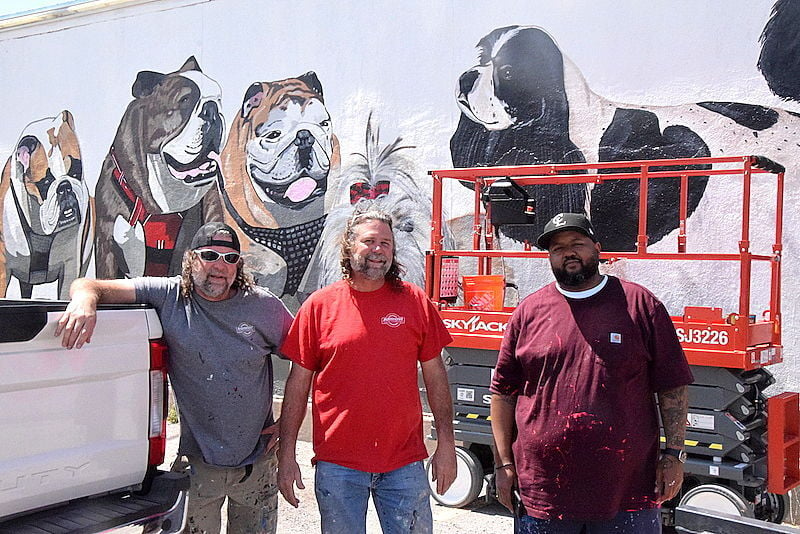 Darry, left, and Terry Shaw, and Robert Peterson joined forces to create the “Good Bois” mural on the east side of Zoom Groom, 910 W. Gore. Peterson said he wanted to do something special for his last mural project. 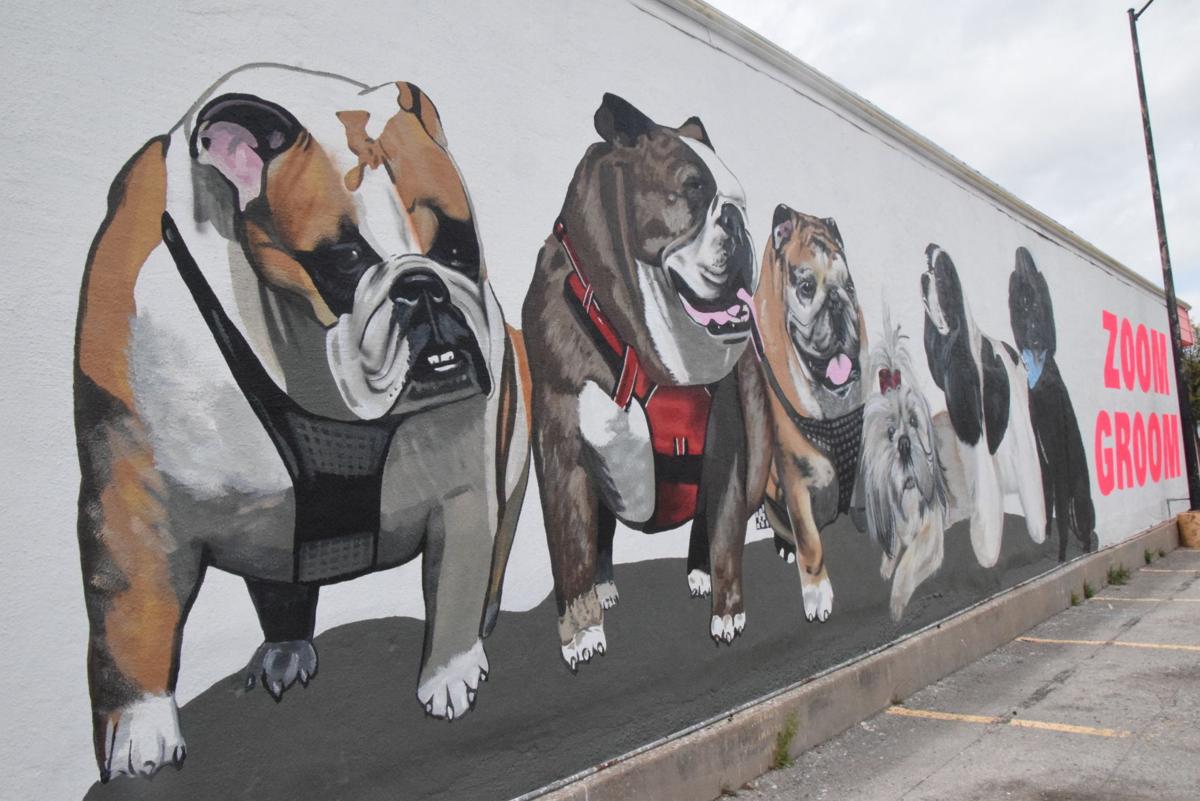 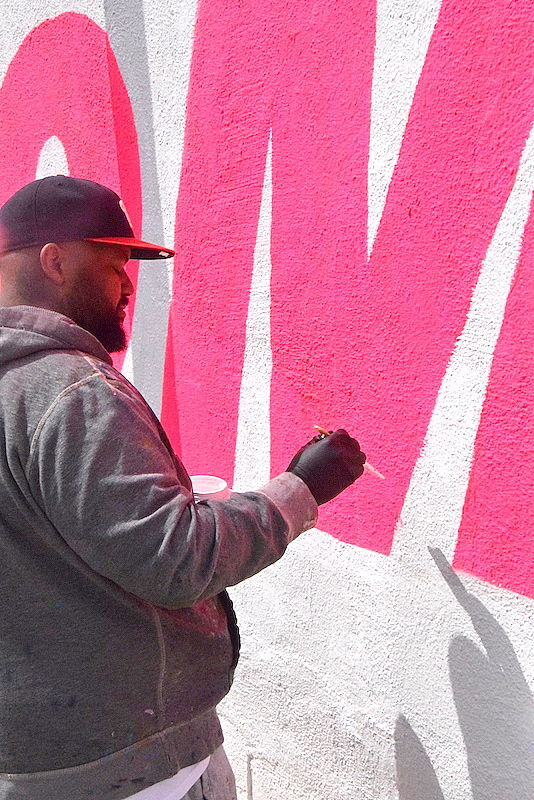 Robert Peterson adds touch ups to the lettering of his latest and last mural project at Zoom Groom, 910 W. Gore. Owner Lizzy Druvenga said she’s been holding the wall for him to make his magic. She was overwhelmed when Darry and Terry Shaw joined the project.

Darry, left, and Terry Shaw, and Robert Peterson joined forces to create the “Good Bois” mural on the east side of Zoom Groom, 910 W. Gore. Peterson said he wanted to do something special for his last mural project.

Robert Peterson adds touch ups to the lettering of his latest and last mural project at Zoom Groom, 910 W. Gore. Owner Lizzy Druvenga said she’s been holding the wall for him to make his magic. She was overwhelmed when Darry and Terry Shaw joined the project.

Three of Lawton’s “top dogs” of the arts world joined forces for something big.

Over the course of the first weekend of April, Robert Peterson and the team of Darry and Terry Shaw took over the eastern wall of Zoom Groom, 910 W. Gore, to make some art. And from their work, a pack of “Good Bois” greet westbound visitors traveling the busy throughway.

Shop owner Lizzy Druvenga said she’d originally promised the wall to Peterson for him to create a mural that fit the tone of the shop. That had been a while. But she caught a surprise when she looked out the window of her home across the street and saw the Shaws mapping out the lines to the image.

“It was a pending project because of COVID,” she said. “I didn’t even know about it until I saw them working on it.”

Peterson said the idea for the pack of puppers came equally from Druvenga and retired Gen. Lee Baxter, whose dogs are featured prominently in the finished piece. Baxter, who is a collector of his art, approached about a year ago and inquired about the pet project.

“This is really cool,” Peterson said while looking over an afternoon’s work. “I don’t do too many animals.”

The timing couldn’t have been more fortunate for the project. Peterson said he’s done painting murals. Over the past year, his career has taken off and there’s too much on the plate to take on these types of project anymore. He has upcoming solo exhibits in Los Angeles, Calif., in September and his first Paris, France, show in October.

The collaboration with the Shaw brothers fell into that perfect pocket of fate’s timing. They ended up in discussion and after one meeting, Peterson became the third Shaw brother for the project. The connection made the decision this would be his last mural, the right decision, he said.

“What better way to go out?” he asked. “I’m super happy with how this turned out. I think it looks great.”

Terry Shaw said the location, viewable from the Cash Saver parking lot, is lit up at night. It made for nice conditions to work out the art.

The brothers Shaw said it was a fun project in working with Peterson. For years, their rivalry to find a clear wall with good view ability to paint a mural often meant a friendly race for fresh canvas was had. Darry Shaw said it allows for breathing a little easier when a sweet spot is spotted.

“We don’t have to get to the wall before Robert does, now,” he said. “I felt like a coke addict, always trying to get to a wall before he does.”

Peterson said the brothers work too quick for him to have been able to keep the pace.

“I can’t keep up with these guys,” he said before laughing.

The color and wonder of Lawton’s many murals continue to grow in number. In-between work at Zoom Groom over the weekend, the brothers also worked on a mural of Tony Stark/Iron Man on the south side of Shady Lady Liquor, 802 SW 11th, to join a Thanos painting they did on its north side. People came out of nowhere, Darry said.

“We had more people hit us up for murals than I think we ever have at one time,” he said.

This mentality of making public art for everybody to enjoy is one of the driving forces behind these and other local artists over the years. It’s something Druvenga reflected on now that her business is among the community’s outdoor gallery.

“It’s an honor, in general,” she said. “It’s a privilege to be a part of the Lawton art community.”