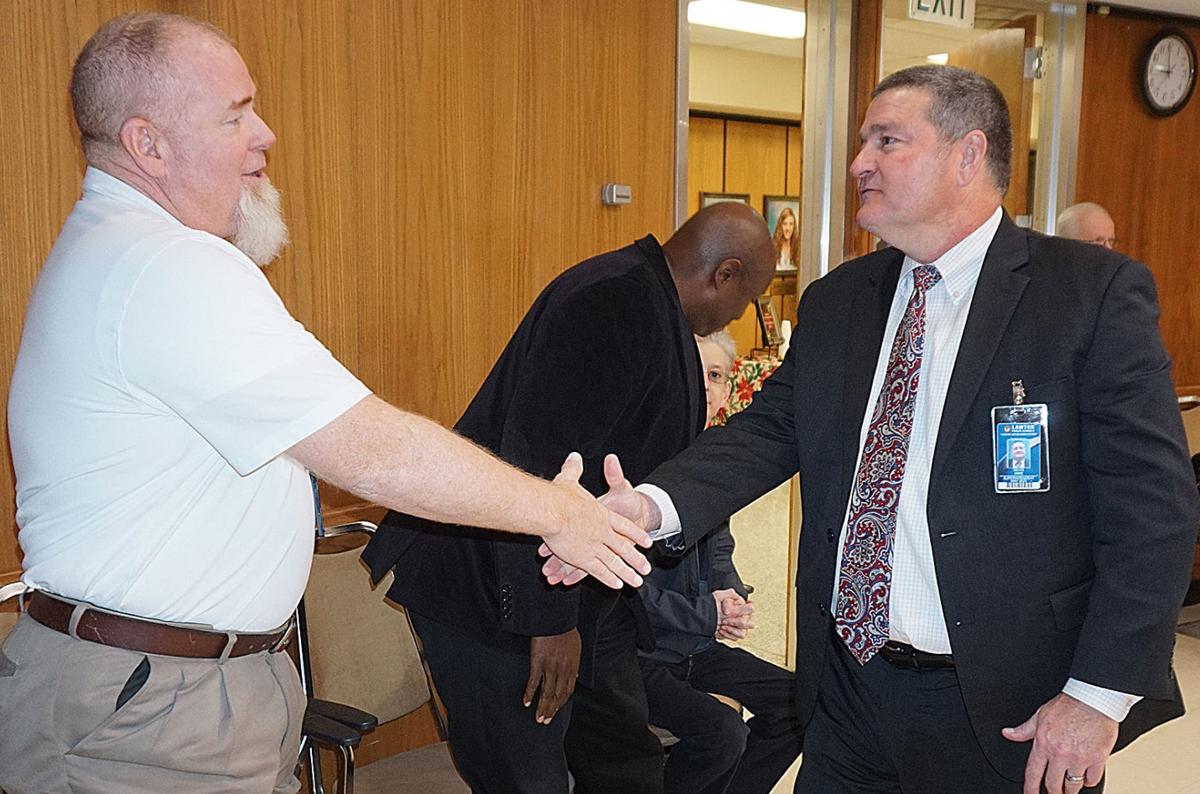 Dave McDermott, left, director of media operations for Lawton Public Schools, greets Superintendent-elect Kevin Hime Wednesday, as Hime met with staffers. The Lawton Board of Education ended a process it began this past summer on Monday by announcing it had hired a new superintendent for LPS. Hime will begin his duties July 1. 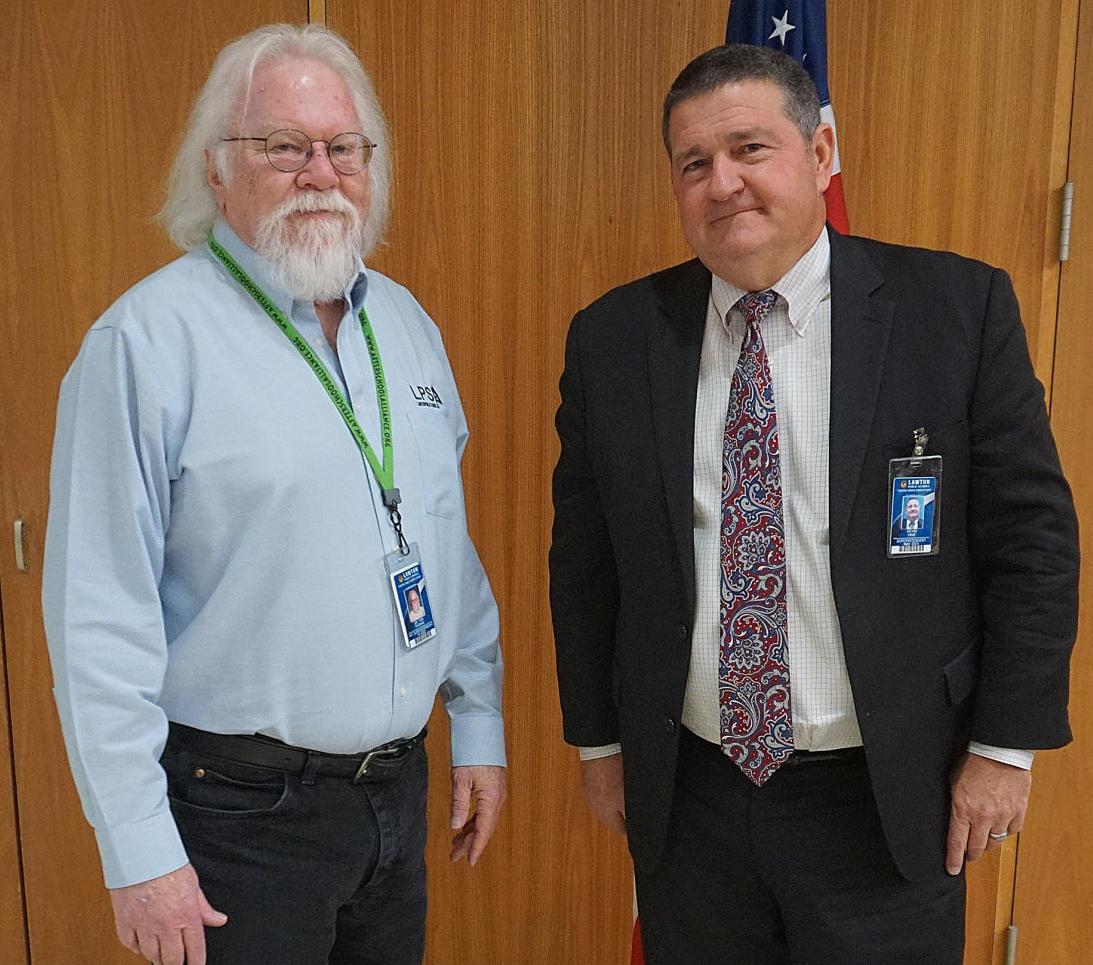 Interim Superintendent Tom Thomas, left, talks to new Lawton Public Schools Superintendent Kevin Hime, as Hime met Wednesday with some of the staff members he will be supervising when he officially becomes LPS superintendent July 1.

Dave McDermott, left, director of media operations for Lawton Public Schools, greets Superintendent-elect Kevin Hime Wednesday, as Hime met with staffers. The Lawton Board of Education ended a process it began this past summer on Monday by announcing it had hired a new superintendent for LPS. Hime will begin his duties July 1.

Interim Superintendent Tom Thomas, left, talks to new Lawton Public Schools Superintendent Kevin Hime, as Hime met Wednesday with some of the staff members he will be supervising when he officially becomes LPS superintendent July 1.

The new superintendent at Lawton Public Schools is almost as enthusiastic about being in Lawton as he is about educating youths.

“I’m passionate,” said Kevin Hime, adding that his goal — and the goal of everyone who works for Lawton Public Schools — has always been to “put kids first.”

Members of the Lawton Board of Education said it was that infectious enthusiasm that won them over almost immediately as they interviewed the candidates who had applied for the district’s top administrative job. In the end, it was the superintendent of Clinton Public Schools who easily won the prize, and school board member Patty Neuwirth jokes that Clinton’s Board of Education isn’t happy about losing their superintendent to Lawton.

Hime, who grew up in Idabel, has been superintendent at Clinton for eight years, and will continue in that job through the spring semester, as both Clinton and Lawton public schools transition to new leaders. Interim Superintendent Tom Thomas committed to serving as Lawton’s lead administrator through the 2019-2020 school year, allowing him and Interim Chief Operating Officer Ken Baden (filling in for two assistant superintendents who retired/resigned this past summer) to work with Hime before Hime takes the Lawton superintendent reins on July 1, 2020.

It also will allow Hime to help his leadership team in Clinton transition to a new superintendent, a search that school’s Board of Education will launch Friday. Hime will travel back and forth to Lawton, beginning his research and learning about the district and the administrators who guide the education of almost 14,000 students.

Hime said he is excited about the prospect of working in Lawton, whose school district has a good reputation in the state. A one-time teacher and coach, Hime also is familiar with the district through those channels, and he said the chance to work with Lawton educators was too good to pass up.

There will be some challenges, he admits. Lawton Public Schools is larger than the 2,200-student Clinton Public Schools, but there are similarities: both communities are extremely diverse and Hime said the focus of any district must be firmly on educating students. He said the size difference in the districts is reflected in the leadership team, which will be one of his first challenges.

“I’m used to a leadership team of 15,” he said, explaining Lawton Public Schools has about 115 administrators, so his job will be to concentrate those personnel into a smaller leadership team which will help him be efficient and to focus on the district’s key mission. “It’s the kids.”

And, he noted that good school districts, no matter their size, are always striving to be better.

“You don’t have to be bad to get better,” Hime said, noting Lawton has a good reputation, but that won’t prevent him and his leadership team from making the district even better.

Hime said he also understands and appreciates the virtues of diversity.

Idabel, where he graduated from high school, had a reputation for being one of the most diverse communities in the nation. Clinton also is a diverse community, where half of the students are Hispanic. Hime said that means he and his administrators understand the needs of students who might be at a disadvantage, for example, on standardized tests when English is not the primary language in their homes.

But, Hime said many students come to school with different experiences that influence their learning, and his high expectations for every educator is to help every student learn. The challenge of education is “how to create opportunities for everyone,” he said, explaining that means looking for everyone’s strengths.

“Not everyone is going to college,” he said, adding he also has been a strong proponent of technology education.

Teachers are a crucial part of the equation because they are the ones who see students every day, Hime told staff members who attended Wednesday’s introductory meeting.

That’s why he will continue one behavioral pattern he developed in Clinton: he visits every building in his district on a regular basis. While that’s five buildings at Clinton, it will be 28 in Lawton, and Hime jokes his secretary may have to build a spreadsheet to keep tabs on his visits.

It fits into his theory that “eight to three is for the kids,” meaning he will try to engage his administrators before the school day starts or after it ends because school hours are to be preserved, as much as possible, for students. His site visits mean principals and teachers will spend less time at Shoemaker Education Center, something Neuwirth and School Board President Carla Clodfelter said would be well-received by the staff.

And, it means Hime will be seeing more of his students in their own environments, as well as their teachers. That setting will encourage teachers to “talk about their kids” and to celebrate the positive things going on, he said. That will allow the district — which includes everyone who interacts with children — to share the good news.

“We need to tell our story,” he said, adding the district needs to celebrate its most important asset, the children. “It’s about the kids.”