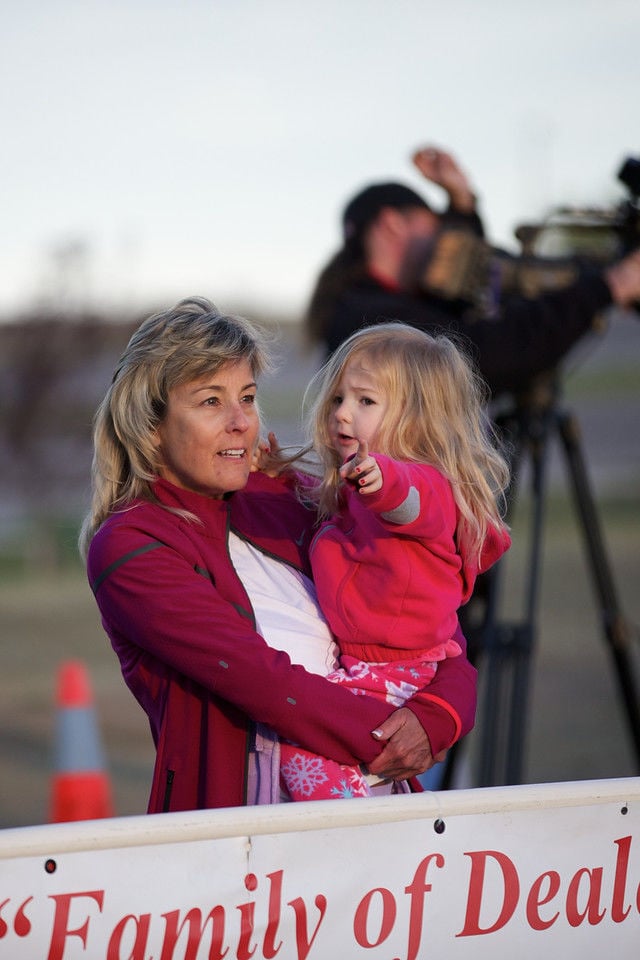 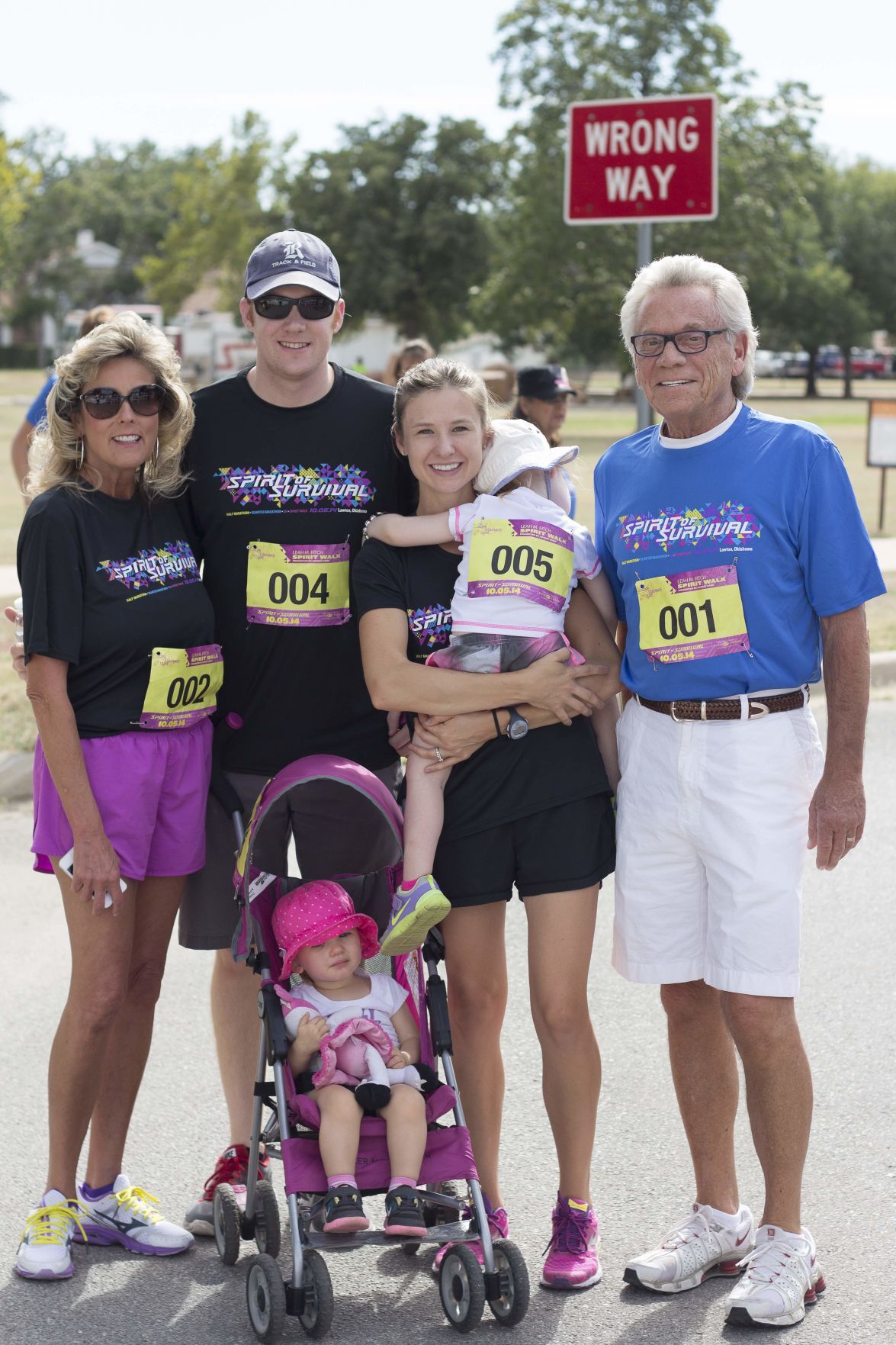 Natalie Fitch and family members show their support of what has become the family tradition of supporting the annual Spirit of Survival run/walk. With Fitch, from left, are: Eric Gross, Eva Gross (in stroller), Jessie Gross, holding Rubie Gross, and Fitch's husband, Fred Fitch. 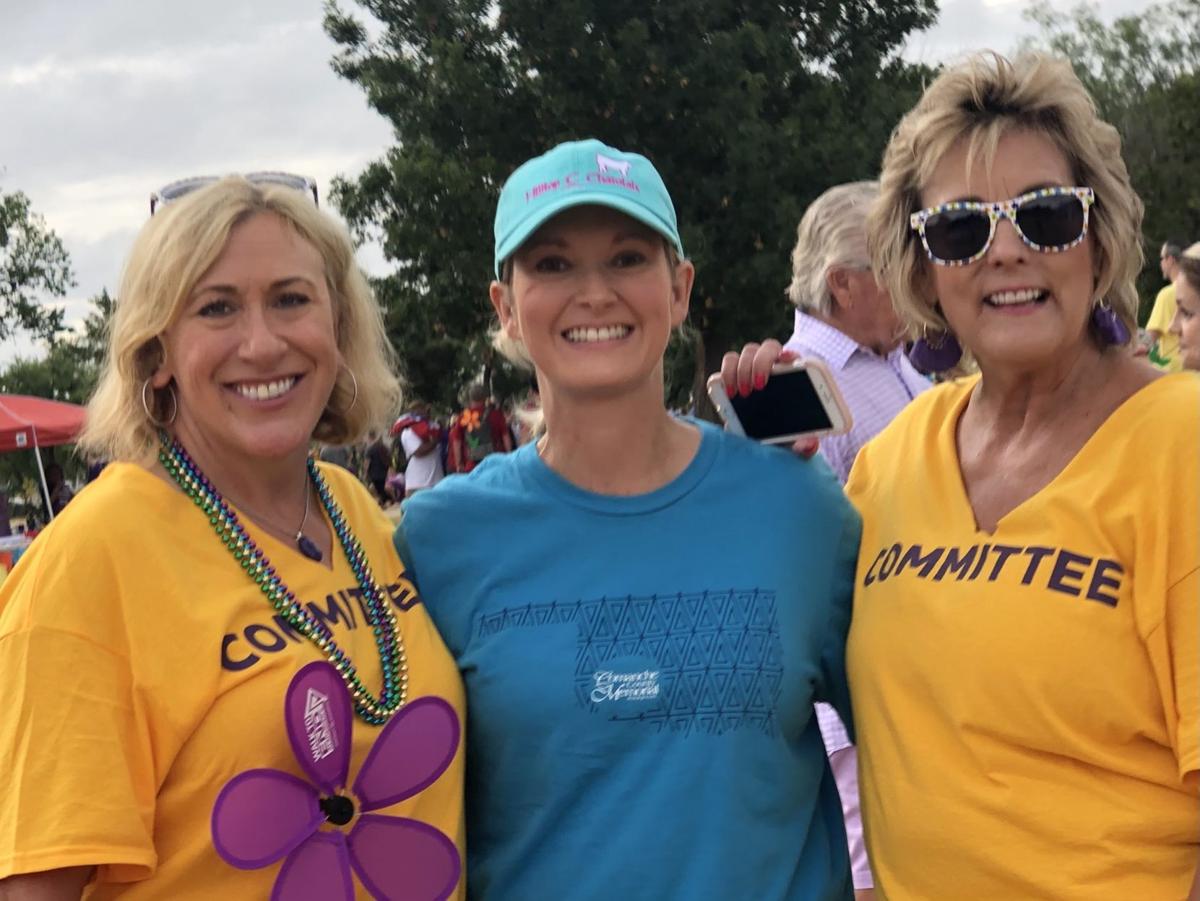 Leah Fitch, right, beams as she and Bridget Randle, left and Lea Ann Chandler, director of the Comanche County Memorial Hospital Foundation, center, participate in one of Lawton's Walk to End Alzheimer's fundraisers.

Natalie Fitch and family members show their support of what has become the family tradition of supporting the annual Spirit of Survival run/walk. With Fitch, from left, are: Eric Gross, Eva Gross (in stroller), Jessie Gross, holding Rubie Gross, and Fitch's husband, Fred Fitch.

Leah Fitch, right, beams as she and Bridget Randle, left and Lea Ann Chandler, director of the Comanche County Memorial Hospital Foundation, center, participate in one of Lawton's Walk to End Alzheimer's fundraisers.

Natalie Fitch is the replacement for Comanche County Memorial Hospital Board of Trustees member Pat Henry. Henry, a long-time civic and community activist in Lawton, resigned from the board in December after serving since July 1998.

"Mrs. Henry was one of the absolute best board members that I have ever served with; her broad-based knowledge and overall understanding of complex issues is unmatched. Mrs. Henry always put others first and did what was best in the best interest our community," said Board of Trustee Chairman Buddy Green.

One of Lawton’s most active community participants is the newest member of the Comanche County Memorial Hospital Board of Trustees.

While Fitch is new to the board of trustees, she’s no stranger to the hospital or its various entities.

She has been a member of the Comanche County Memorial Hospital Foundation for 10 years, serving as the board’s gift chairman for several years. She also is deeply involved fundraising efforts for the hospital’s Children’s Starlight Fund, something Fitch said she “definitely have become very passionate about.” She said she remembers being involved in Starlight’s first concert fundraiser at Medicine Park, and she’s proud to continue her strong support.

Another passion is the Spirit of Survival race that supports the Leah M. Fitch Cancer Center of Southwest Oklahoma complex housed on the Memorial Hospital Campus. The center is named in honor of her husband’s first wife Leah, who died from cancer in 2006. Fitch said she and her family are involved in fundraising events not just because of her husband and his sons, but because they support the center’s mission. Supporters organized and continue to hold a successful campaign that has grown since its inception, something Fitch said is a tribute to residents.

“It’s because of the community pulling together,” she said, adding she has to be involved because she strongly believes in supporting her community.

With all her connections to the hospital, it wasn’t surprising Fitch would take on another service role as trustee on the five-member board of trustees. But, that doesn’t mean taking that step in January wasn’t intimidating, starting with how she got there. It was Pat Henry herself, someone who Fitch acknowledges as a mentor, who recruited Fitch to take over her seat.

“I was shocked. I was honored. I was scared,” she said of a new activity that wasn’t even on her radar before Henry called for a meeting to tell her she was resigning and wanted Fitch as her replacement.

Fitch said she also knows she will bring the same passion to the board that she has brought to other community pursuits she has engaged in since returning to her hometown. It’s a broad-based board and Fitch said she still is learning, working with a diverse group that includes a doctor, businessman, attorney and retired judge. Fitch said the board is an important component of a hospital that brings much to Lawton-Fort Sill.

“They are the governing board,” she said of the community leaders who guide the hospital and its programs, with the help of a talented staff. “They’re very invested.”

While she hasn’t been a member of the board long enough to know her exact goals, Fitch said she brings a business mind to the group, relying on what she has learned during her decades in the business world and today’s work as resiliency service leader with IBM for North and Latin America. That business mind is important because while the hospital is a health care provider, it also is a business that must remain successful.

Fitting into the tradition of trustee members with long tenures, Fitch said she plans to be member of the board “as long as I can be there” and she will continue supporting the hospital’s goals of being an innovative health care presence in Southwest Oklahoma.

It all fits into her goal of community participation.

“Im determined to make the world a better place,” she said, of her goal in all activities, which ties back to the various activities she pursued at the hospital before her placement on the board.

Outside the hospital, she’s a longtime supporter of the Alzheimer Association’s Walk to End Alzheimer’s, calling that entity “one of my passions.” Her other work includes membership on the United Way of Southwest Oklahoma Board of Trustees, explaining that board supports numerous entities in the community that have ties to health and the hospital.

Fitch is a native of Lawton-Fort Sill, graduating from Lawton High School before earning a bachelor’s degree in business from Barry University, Miami, Florida. She is married to Fred Fitch and the couple has three children, five grandchildren and two cocker spaniels.