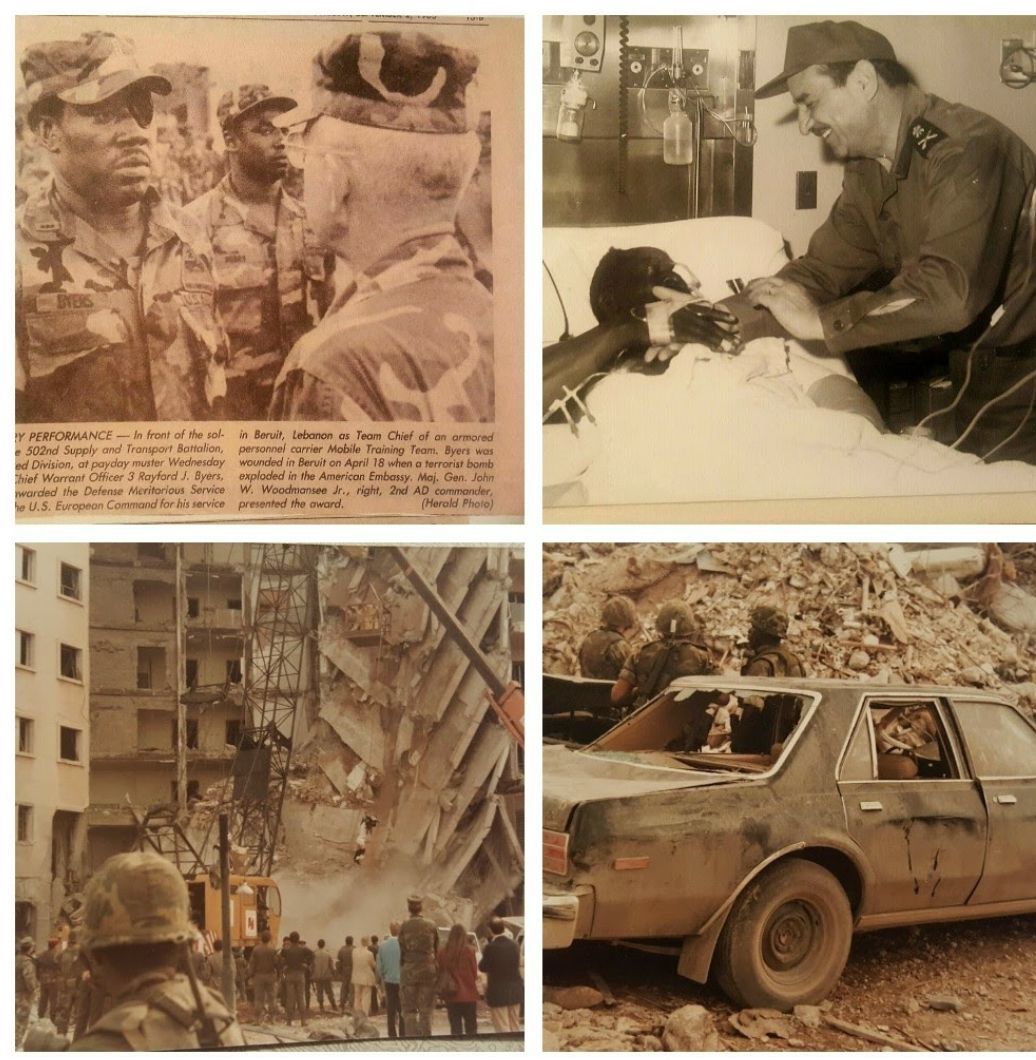 Images from Rayford Byers' experience during the April 18, 1983, suicide bombing of the U.S. embassy in Beirut, Lebanon. In the blast, he lost his eye and four men three days before they were due to return home. There would be 108 people who died that day. They live in the minds of the survivors. 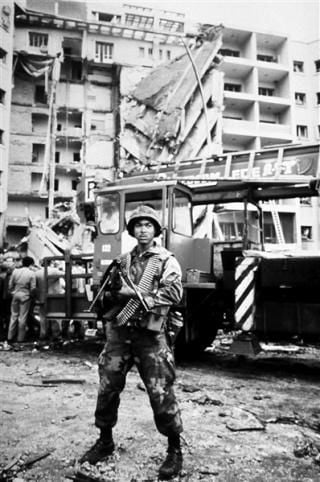 An unidentified Marine stands his post outside the bomb shattered U.S. embassy in Beirut, Lebanon, following the April 18, 1983 bombing that killed 108 men, including four men with Rayford Byers. He lost an eye and was injured severely after being thrown out a third floor window from the concussion. 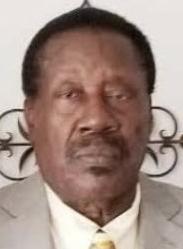 Images from Rayford Byers' experience during the April 18, 1983, suicide bombing of the U.S. embassy in Beirut, Lebanon. In the blast, he lost his eye and four men three days before they were due to return home. There would be 108 people who died that day. They live in the minds of the survivors.

An unidentified Marine stands his post outside the bomb shattered U.S. embassy in Beirut, Lebanon, following the April 18, 1983 bombing that killed 108 men, including four men with Rayford Byers. He lost an eye and was injured severely after being thrown out a third floor window from the concussion.

Last weekend offered Rayford Byers something he hasn’t had since April 18, 1983 — the opportunity to forget.

On that day 37 years ago, Byers was on his way upstairs in the U.S. embassy in Beirut, Lebanon, to pick up the tickets for him and four of his fellow Marines to return to Fort Hood, Texas. Coming down and, later, coming back would be the hardest part.

At 49 years old at the time, Byers was finishing his second tour in the Middle Eastern city as part of the Marine Corps’ efforts to oversee the Palestinian withdrawal from Lebanon. The now-retired warrant officer was ready to go home after training his men in the field; they had returned that day. His men were seated at the dining room when he ran his errand upstairs.

Byers thought he’d heard an explosion and wondered if “something blew up.”

“When I got upstairs in the embassy, I was in the administration building, there was dead people and blood running all over there,” he said.

En route back down to check on his men, Byers quickly reached the first floor. But he didn’t do it by the stairs.

“I didn’t get back down,” he said. “I got blown out of the third story window and all the way down to the ground.”

Buried both atop and under the rubble and glass, Byers was under the spell of shock resulting from the concussion, the fall and his accompanying injuries. But he remembers clearly the horror that surrounded him.

“Everybody was howling and screaming,” he said. “A little kid heard me hollering and called over a bulldozer and they got me out from under it.”

Marines are known for being unusually tough. Byers exemplified the Semper Fi ideal. Broken and battered, he wasn’t beaten. But he did take his lumps.

“I lost one of my eyes and my head was all crushed in,” he said. “I lost my eye totally; everything was just broken.”

A medivac took Byers to Germany where surgery for a craniotomy was performed. For two and a half weeks, he recuperated enough to make his return stateside.

Byers said he didn’t know what happened to his crew of men. It was devastating when he found out. The concussion of the bomb killed them all, he said.

“They were blown all to pieces,” he said, his voice breaking. “I lost four team members. I lost all four of them.”

Byers’ men were among 108 people killed following a car bomb explosion outside the embassy. Those numbers include the suicide bomber and 17 Americans. It was identified as a terrorist attack carried out in protest of the U.S. military’s presence in Lebanon. What was once considered “the paradise of the Middle East” was now painted by bloodshed.

This violent act was followed on Oct. 23, 1983, when Lebanese terrorists drove an explosive-packed truck past and through security measures to detonate at the Marines barracks in Beirut. This attack killed 241 members of the military. At almost the same time as the strike on the Marines, a separate suicide bombing killed 58 French soldiers.

By early February 1984, President Ronald Reagan would announce the end of the U.S. role in peacekeeping operations. On Feb. 26, 1984, the final group of U.S. Marines left Beirut’s soil.

Byers’ return home preceded these events. He was brought back to Fort Hood, Texas, and his wife and son came and stayed with him during his surgeries and recovery at American Hospital.

When he was physically as mended as he could be, Byers told his wife something that was a long time coming.

Destined for a stint in Panama if he stayed in service, Byers said his two tours in Vietnam, not to mention two tours in Beirut, were enough.

“I think I just want to go home to be with my family,” he said.

And at “20 years, one month and five days,” Byers and family made their move to Lawton. His final experience overseas remained with him. It continues to live inside. Knowing he was going home in three days before the bomb took his men was another thing that continues to take its toll.

“Vietnam wasn’t nothing like that,” he said. “Every 18th of April, I would always to go church. Nobody would go with me. I just wanted to be by myself. I was really having some rough times.”

Retirement has offered a good life and many better memories than that April 1983 day. Scars do fade a little bit over time.

Byers said that his family never forgets the dreaded anniversary. They’re not bringing it up but, instead, give him the space needed. And in that space, this year, at least for a little while, he forgot.

“This was the first time I ever missed it,” he said. “I don’t have anybody to even discuss this with; they all got killed. I know I never want to go back to Beirut again.”