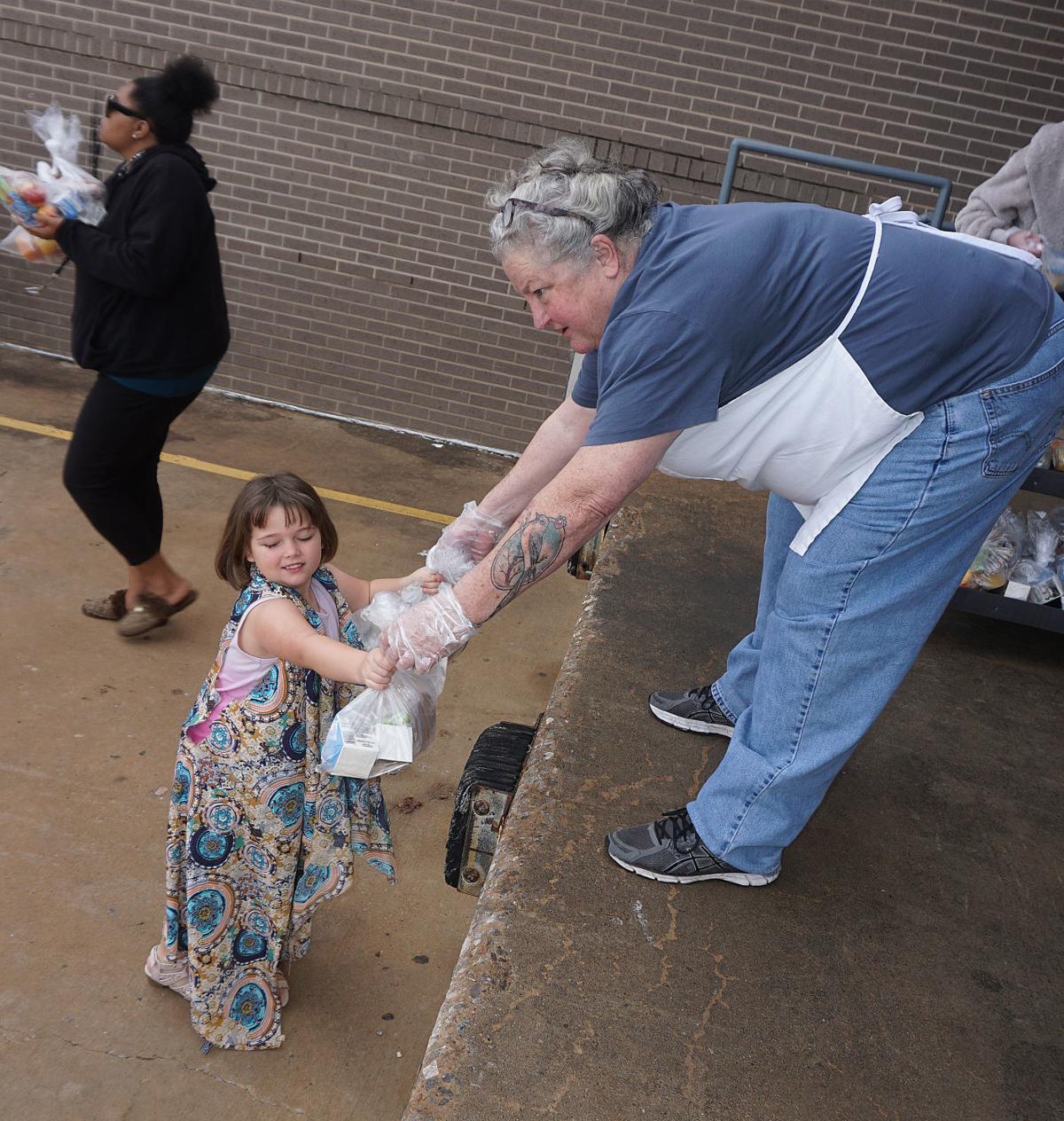 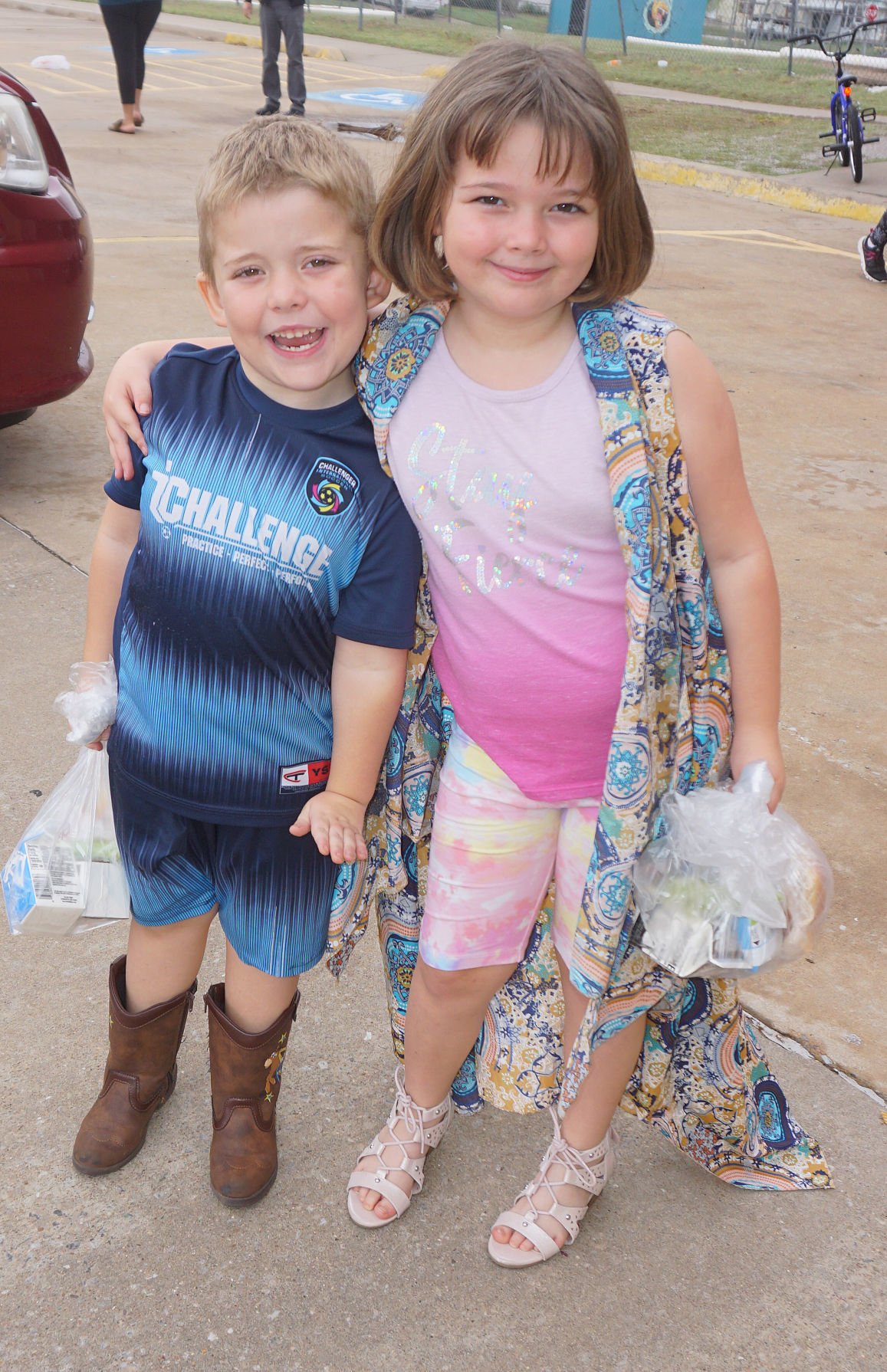 Amanda Kenny, right, is all smiles alongside her brother Andrew on Monday. Their mother, Madonna Kenny, brought them by to pick up a free sack lunch.

Amanda Kenny, right, is all smiles alongside her brother Andrew on Monday. Their mother, Madonna Kenny, brought them by to pick up a free sack lunch.

Spring Break got a little longer last week for students at Lawton Public Schools when the district made the decision to keep schools closed until April 6. For many students facing food insecurity this meant they would lose access to two meals a day. Hoping to ease the burden for parents, LPS immediately sat out to organize feeding sites at area schools to offer free sack meals.

“We tried to get as many school sites open as possible to lower the amount of people at each site,” Ghrayyeb said. “That makes it easier on students too, so if they are at home they don’t have to walk as far to get to a site.”

21 out of 26 school sites were opened this week to serve as feeding centers. The five schools that were not open overlapped with other sites in the area and were not required, according to Ghrayyeb.

Each site prepared to handle around 100 visitors on Monday, roughly 10 percent of each school’s population Ghrayyeb said. As the week progresses the district will reevaluate the need and adjust accordingly.

“They get a lunch and a breakfast with every meal. And they don’t have to be students. Anybody that is under 18 or anybody that attends LPS can get one,” Ghrayyeb said.

Cars began lining up at Pat Henry Elementary School, one of the designated feeding sites, around 11 a.m. on Monday. At 11:30 a.m., the back door opened and Martha Doolin, a five-year veteran cook at the school, wheeled out two carts stacked with sack lunches.

Within 10 minutes, over 70 meals had been picked up by grateful parents.

“We feed about 400 kids a day here, so this is nothing for us,” Doolin said. “We started at 8 a.m. this morning and, honey, we had the sandwiches made in an hour.”

Each sack was nearly identical and contained a nutritionally balanced meal that met the school’s standards.

“There’s two milks, a juice, a sandwich which provides whole grain and protein, a breakfast item a fruit and a vegetable,” Doolin said. “Usually for a sack lunch I’d try and give them chips or something too, but no treat today.”

For Karron Kittel, who had come to pick up meals for her two sons Matthew and Isiah, it was more than enough to be grateful for. Last week, Kittel was laid off from her job and worrying about how she is going to keep the lights on for the rest of the month, knowing that she could come pick up a free meal for her kids — both of whom would have been in school this week otherwise —was a blessing.

“We actually ran out of food last week. We went to Walmart and there was nothing. This is helping. It’s been rough. But this is helping,” Kittel said.

Kittel plans to get back out to one of the feeding sites every day this week and thanked the schools for the help.

“I’ve still got to figure out how my bills are going to get paid next month, but I’m happy we got this,” Kittel said.

As the crowds wound down on the first day Doolin was optimistic that the next would bring even more people out.

“Hopefully, once we get the word out more will come,” Doolin said. “And we’ll feed them.”

AVAILABLE TO ALL KIDS AGE 18 AND UNDER • NO FEE / REGISTRATION