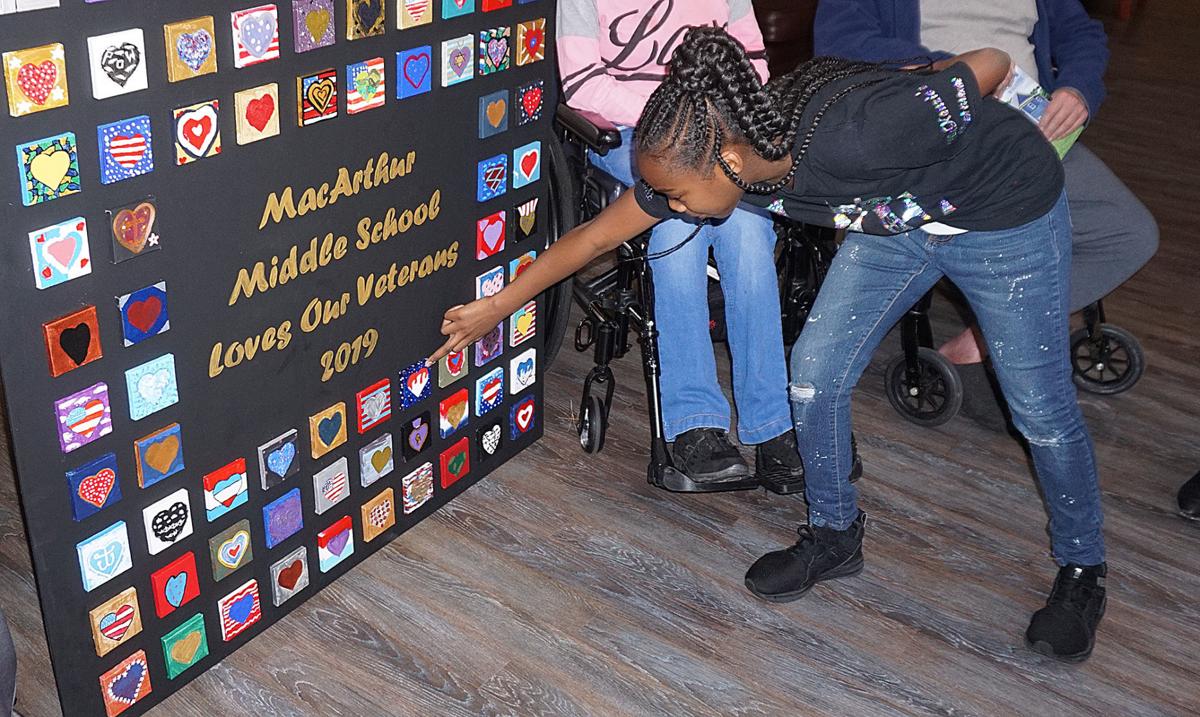 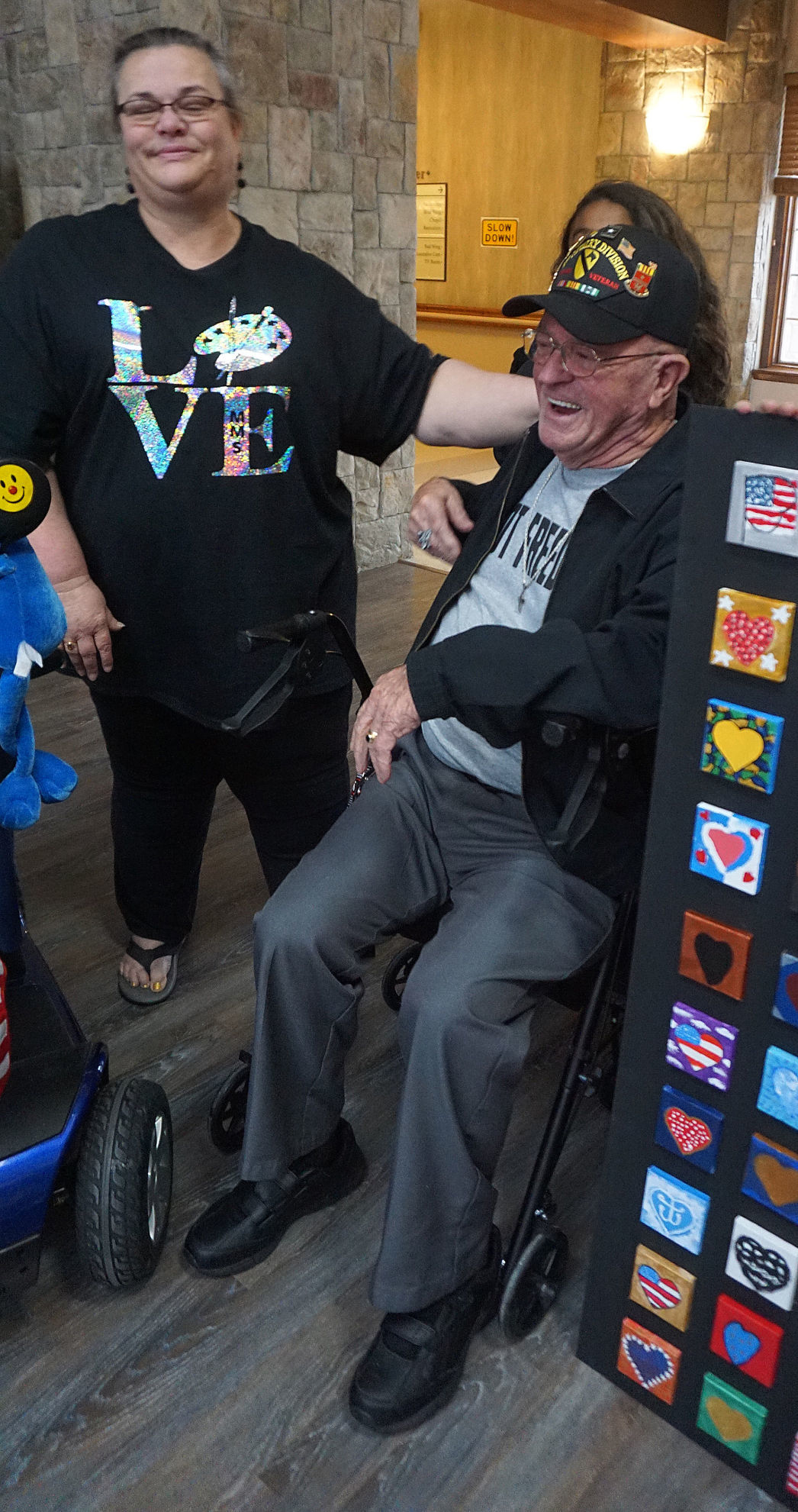 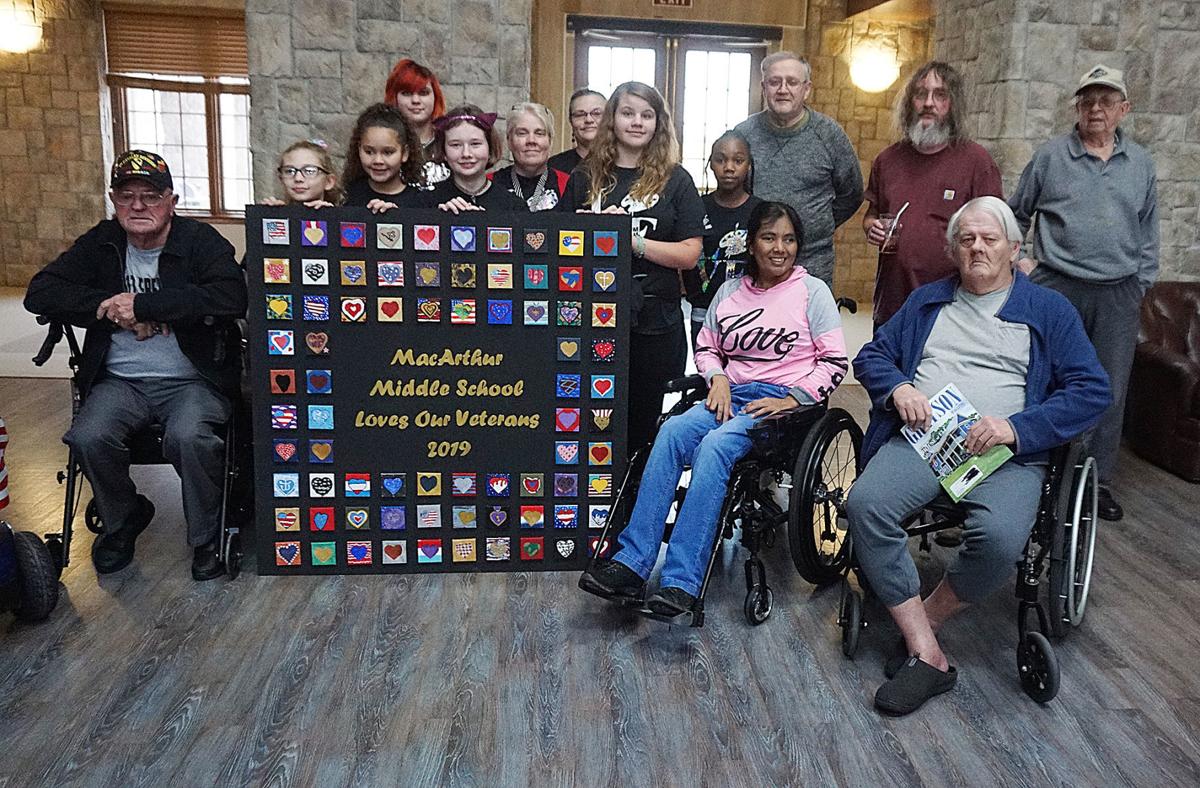 Members of the MacArthur Middle School Art Club present an art project to local veterans Friday afternoon at the Lawton Fort Sill Veterans Center. The artwork incorporated the colors of all the military branches and the heart, the universal sign for love.

Members of the MacArthur Middle School Art Club present an art project to local veterans Friday afternoon at the Lawton Fort Sill Veterans Center. The artwork incorporated the colors of all the military branches and the heart, the universal sign for love.

After serving in the U.S. Army for 20 years, Avery Hall worked as a custodian at MacArthur Middle School the year the school opened.

“I really enjoyed watching it being built,” reflected Hall, “and when it opened, we were really proud of it.”

Hall is now a resident at the Lawton Fort Sill Veterans Center, where his worlds collided Friday afternoon when members of the MacArthur Middle School Art Club presented a piece of art they’d created to local veterans. The significance was not lost on Hall, as he laughed and reminisced with old friends.

“It means a lot to me to see the younger generation supporting veterans the way they are today,” Hall said. “We see a lot of young people visiting, and it makes us feel good to know they appreciate our service.”

Deborah McNally, a longtime friend of Hall’s and the MMS art teacher, said the project was intended to show the veterans center’s residents they are not forgotten.

“We want to give back to our veterans,” McNally said, “and to let them know they’re loved and appreciated.”

McNally’s father, a military veteran, was a resident of the veterans center before he died last year. She said many of her 25 art club students have military parents and family members, which made the project even more special.

“We started the project in September,” McNally said.

Students incorporated colors from all the military branches — and many military flags and awards — to create 76 tiny tiles, all featuring the universal symbol of love — a heart.

“It was a labor of love,” McNally said. “Every one of them is different.”

Some tiles were bright and busy, others simple. Hearts featured stars and anchors; one was even made to imitate a Purple Heart, another looked like planet Earth.

Seventh grader Amariah Chambray pointed out one of her favorite tiles: a white heart she painted on a bright blue background. The heart dripped with red paint, representing the blood spilled by veterans to keep our country free.

Chambray, whose stepdad retired from the Navy, said getting to meet a few of the veterans who will see the tiles each day made the project worth it.

“It makes me happy to know who we made it for,” she said.

Eighth grader LeeAnn McKenzie serves as president of the art club. She said she’s proud of the way the project turned out.

“We all worked our hardest on it,” McKenzie said. “It means a lot to us to support the people who gave us freedom.”

McKenzie said her grandfather was a veteran and though he died a year ago, she knows he’d also be proud to see the project she helped create.

“It’s humbling, I’m very appreciative of it,” Woods said. “I’m here every day caring for these guys, so when someone comes in here and shows them the same care and respect that I would want, it’s really amazing.”